There’s another Phillips girl in the family! That’s right, my brother and his wife welcomed their baby girl last Sunday (on her due date! 10/25). Welcome to the world Avery Rose!

Okay, first, the most important thing: that baby is adorable. OBVIOUSLY. I actually think she looks very similar to Merritt and Zoe when they were babies, which I think is pretty cool. She made her way into the world via C-section as well after a 24 hour labor with my sister-in-law contracting a fever at the tail end of the excitement. Our Phillips girls just really like to stay put apparently. They’re strong-willed ladies, but I wouldn’t have it any other way.

And how cool that I get to share a middle name with my niece?! I love that 🙂 🙂 🙂 And Zoe shares that as well. Pretty cool family tradition we’ve got going on over here.

Want more pictures? OF COURSE YOU DO!

Okay, I must confess, there is also a selfish reason why I am writing this post as well: another baby in the family means that there is another little person I get to make art projects for, bah!!! And because my girls love the mobile I made that’s above their changing table, I decided that Avery needed one as well 🙂

The items hanging from our mobile are things that are indicative of our relationship and the things we’re interested in. Chris and I came up with some ideas for Adam and Christine, but I also reached out to our parents and asked them what items they thought I should include. We came up with these 6:

1. A football: both sides of the family LOVE football. But we’re Raiders fans and Christine (and her family) are Chargers fans. So I just opted to make a football, instead of a team logo. They’re a family divided. But I’ll PROBABLY send along a Raiders onesie at some point…I mean, no one can turn down hand-me-downs 🙂

2. An airplane: they have traveled to SO MANY really cool places.

3. A palm tree: to represent their life down in San Diego

4. The Transamerica Building in SF: to represent the time they spent living in SF before they got married

5. A dog: a little figurine of their doggie Ax 🙂

6. The Filipino Flag: Little Avery is 1/2 Filipino from Christine’s side and so even though she’s living in the United States, I wanted her to get a good representation of the other 1/2 of her

It took several nights to make all the little felt figurines (that doggie was a challenge), but after maybe a week or so I had them all done. And I loved them! 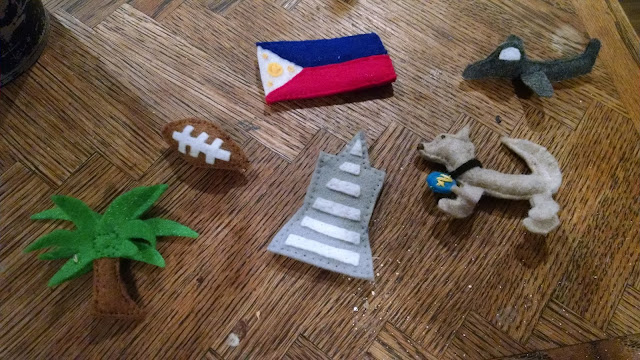 Then, just like with ours, I went out to the garage and used some scrap MDF we had laying around and cut the shape out they would hang from. I drilled two holes into each prong to slip the string into. Then I painted the top white and the bottom side that will look down at the baby various bright, fun colors. After that I coated the whole thing in several layers of modge podge 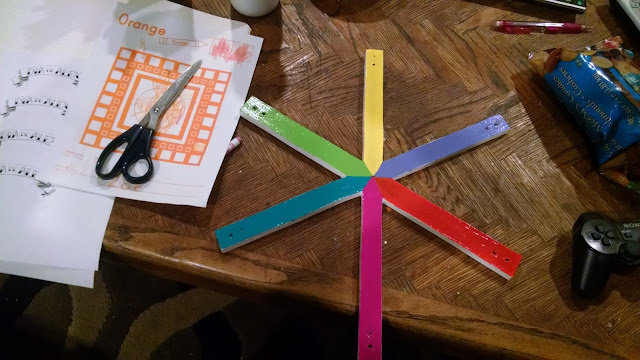 Next, I used embroidery thread to string through each figurine to braid the chain that would allow each item to hang down 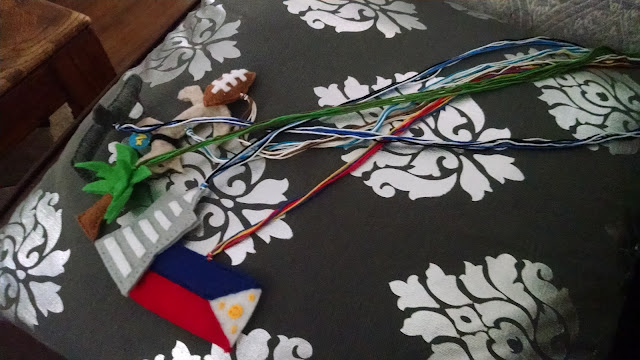 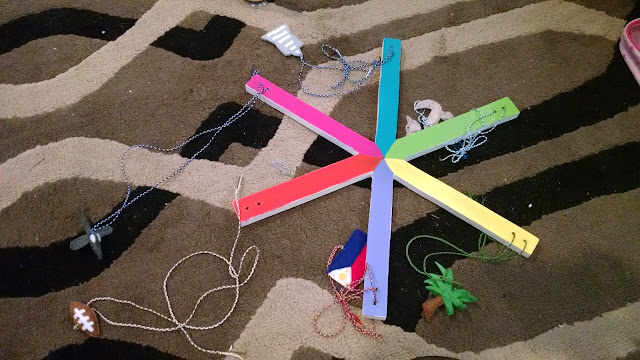 Zoe actually helped at this stage and was VERY excited to show off: “Look at the mobile I build!” 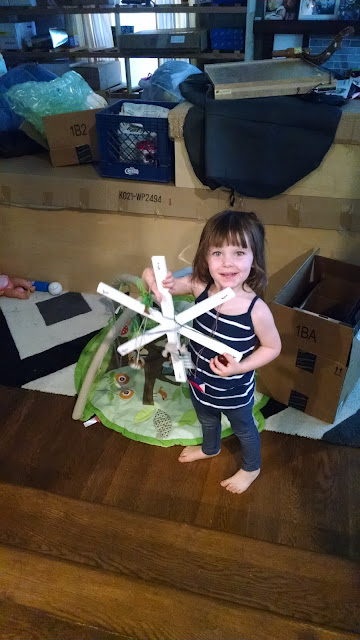 The last step before mailing it off to them was to put at eye bolt on the top of the frame and attach fishing line to let it hang from the ceiling. I wasn’t sure where Adam and Christine would hang it from (and they didn’t even know it was coming yet), so I left the fishing line really long and gave them an additional eye bolt so they could hang it wherever they wanted 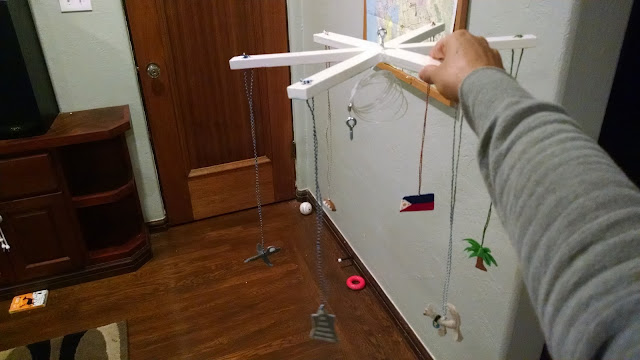 Then I packed it all up and mailed it off to them, hehehehehehe 🙂 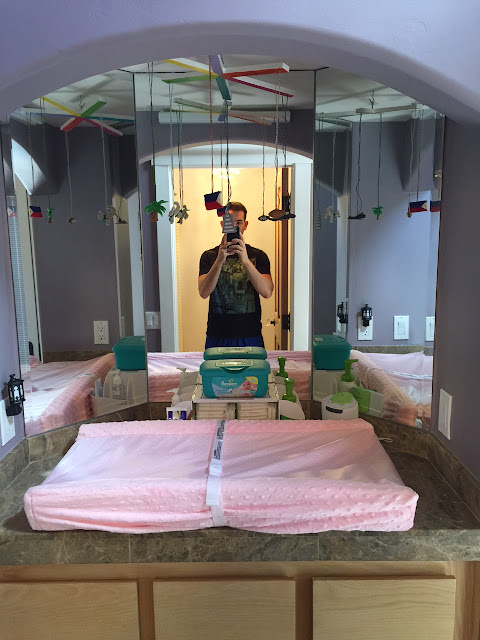 I love art projects, and I ESPECIALLY love art projects that involve getting to share love with my family. Becoming a mom has been so challenging and rewarding and I just wanted to give my wonderful brother and sister-in-law a little something special. I know they’re awesome parents already 🙂

One more shot of that cutie?

And how lucky are our parents? From ZERO grand kids to THREE grand babies in less than 3 years. They’re definitely soaking up all the love 🙂