After we had Zoe I knew I wanted to get a family ring made. I’m not a big jewelry wearer or anything, but it seemed like a nice, sentimental piece that I would love. Of course, I needed to wait for our other baby to be born first 🙂 But after Merritt was about a month old I went to the same jeweler who made our engagement/wedding rings and gave him the task of making my family ring.

I had been pinning items a bit and had a pretty concrete idea of what I wanted. Chris (the jeweler) was already very familiar with my linear, geometric, OCD brain and how I was very particular about things. So he was ready to take a lot of notes.

These were the things I liked: something different, something (OBVIOUSLY) to symbolize each of us, the stones to be flat and more unassuming, the number 12.

I liked the idea of black metal. And…

I liked the idea of the right having a flat top. I don’t like my rings to have stones that protrude out too much, and I didn’t want this ring to just have a simple of layer line of stones because that’s what my engagement ring has, and I wanted them to be different.

After a bit of research however I nixed the idea of the black metal because it’s usually plated gold and rubs and scratches off. You generally want to get it re-plated at least once a year to keep it looking nice. And, let’s be honest, I’m super lazy about jewelry and I want it done just once. Chris suggested that I stick with rose gold (my middle name is Rose, and rose gold is rose colored because of copper, so it seemed fitting) because I don’t like yellow gold or platinum and I’m allergic to several other metals. But he suggested a matte finish to make it just a little different. LOVE the idea.

Then we talked about what stones I wanted. Hubby Chris was easy: July is Ruby. Done. But October is traditionally Opal and that’s an incredibly soft stone, so I didn’t want to use that. Instead, we went with Rose Zircon. Then, for the girls we used Alexandrite. This stone can be INCREDIBLY EXPENSIVE if it’s natural Alexandrite. But lab made Alexandrite is much more affordable, so we opted for that. The really cool thing about this gemstone is that it actually changes colors based on the lighting and environment it’s in, which adds another cool layer to the ring. Both girls are born in June, but I didn’t want to use the same exact stone for each of them, because they’re different individual ladies, so I made Chris hunt down two different colors of Alexandrite for me 🙂

We got 3 stones of each color – 12 stones in total. 12 is a number that is special to Chris and me. I’m not superstitious or anything, but that number comes up A LOT for us (birthdays, anniversaries, addresses we’ve lived at together, etc.), so it’s a poignant number for us.

Once we had all of the stones he cast the ring in wax to make sure I liked the shape of it. I went in to make sure it fit and check on the taper of the top, how wide it was, etc. I loved how it looked, so then it came time for him to cast the ring in metal. After he was done with that step he wanted me to come in again to approve the shape before he set the stones in. It looked AWESOME 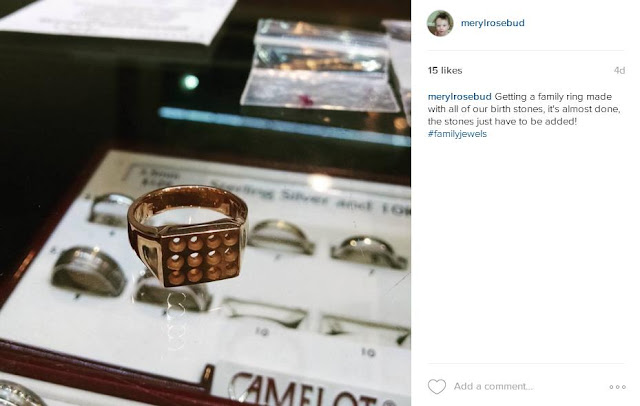 He finished it two weekends and wanted me to come in to see it. I LOVED it. But he wasn’t as happy with how he had done the matte finish (essentially with a sander used for jewelry). He wanted to re-matte it with a sandblaster, which I thought was SUPER cool. As much as I wanted to take it that day and wear it forever and ever already, I trusted his artistic vision 🙂 (he was actually pretty excited along the way and had lots of suggestions and input, which was fun).

So I went in last week to pick up the finished ring. And let me tell you….AMAZING 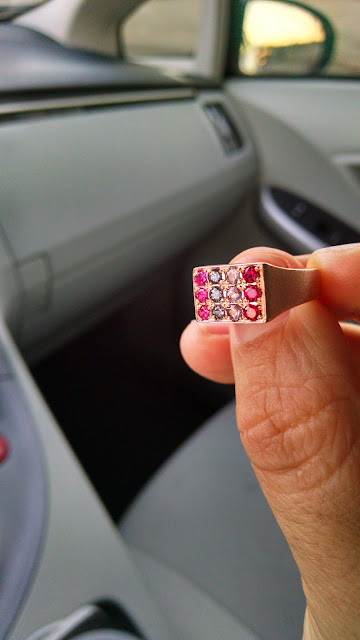 I love it sooooooo much.

I love all the stones together and on their own. The 2 rows Alexandrite in the middle tend to look pinkish most frequently because they’re next to the Ruby and Rose Zircon, but the darker one (on the left/middle in the pic) can sometimes look green/blue or even black. And the lighter one (on the right/middle) can look white and gray. It is so fucking cool.

I love how it is flat and presents itself at the top. It’s still unassuming and not BAM in your face (I don’t like big stones that jut out) but it has a subtle beauty that I love.

The sandblasted matte finish to the rose gold band is fucking awesome. It’s such a cool technique he used and the matte is incredibly even all the way around. It’s super cool.

I love the heft of it. He actually ended up using almost and ounce and a half of gold, so it’s a fairly heave ring. But I actually really like that. It’s not too heavy that it’s annoying, but I’m always aware that it’s there and it’s nice to look down and stare at 🙂

I love my family (except the other day when I had to DRAG Zoe screaming to my car from the park with no shoes on while also holding Merritt in the carrier. That wasn’t fun…) and I love my ring 🙂 🙂 🙂