With a pretty good semi complete plan of what to do with the front room, I was excited about what to do about the table area. Immediately an idea came to mind, and I was super pumped about it. You see, I’ve been collecting these sports tickets for years 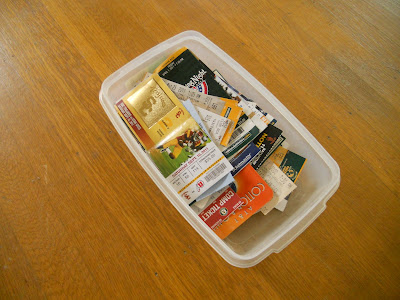 And I’ve always thought, “oh I’ll make a table, or maybe I’m make some art with these.” But I’ve just still collected them for going on 11 years now. I started slowly by saving tickets from sports events here and there, but starting in about 2002 or 2003 I really tried to keep one ticket from every sports event I went to. My parents and Chris even got into and started giving me their tickets too. And now there are a lot 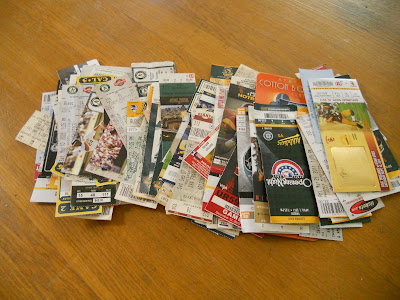 And now that Chris and I have decided that we want a nice little table area in the front room to play games at or to eat at when we have more than 2 people in the house (what? eating at the coffee table doesn’t count as family time?), it seems like the perfect time to put these tickets to use.

The plan will be to make a collage with all the tickets and cover the top of a table with them. And the best part? When we moved into the house there was a super big piece of glass floating around the backyard (it’s currently raining outside, or else I’d show you a pic of it, but it’s a nice thick piece that’s pretttttttyyy dirty). It needs a lot of cleaning up and some love, but at 30″ x 60″ it’s a great size. And to make the table a bit bigger (to comfortably fit two or three chairs on each side) I thought making an inlay area in the center for the ticket collage with the glass on top and then making a 6″ or so wood border around all 4 sides will give the table great size while also keeping it looking good. 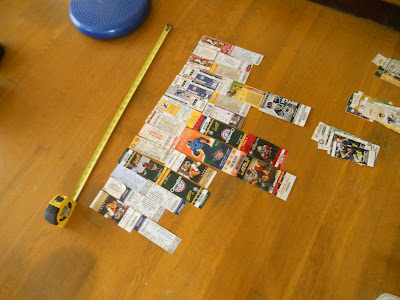 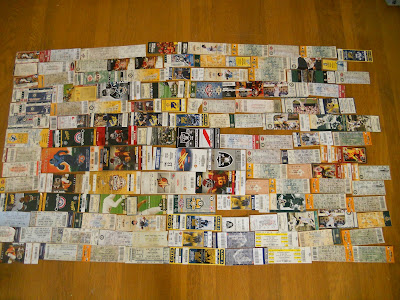 It was really fun laying them all out actually because I got to see some of my favorite tickets and think about all the fun memories I’ve had at sporting events. Here are just a couple of my favorites: 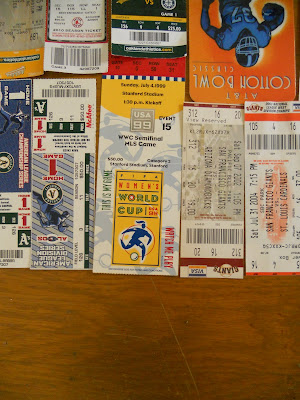 That ticket is actually the very first sports ticket I saved. I played soccer for nearly 13 years and loved the women’s team in the late 90s/early 00s (just like every other young soccer girl). I even did a project on Mia Hamm in 8th grade, hehehehehe. I went to the game with my mom and CBH and it was just amazing. 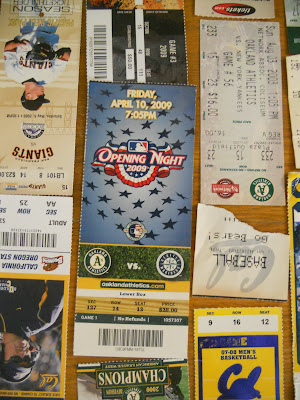 It’s tradition to go to Opening Day every year with my dad. I just got the meeting request from my dad via email 3 weeks ago for next year: April 6th. We take it very seriously 🙂 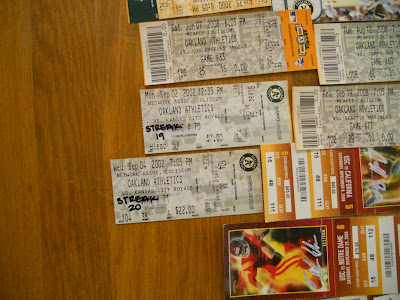 That’s right, yours truly was at the A’s for the 19th and 20th games in the 20 game winning streak in 2002 (and HELLO? Have you seen Moneyball???? Well you should!). Game 20 was probably the most exciting sporting event for me personally in my life (I had just turned 4 when the A’s won the World Series in ’89 so I have no recollection). As a huge A’s fan it was absolutely amazing and exciting and thrilling to be at and I LOVE that I still have those two tickets.

Alright, but back to making my table… 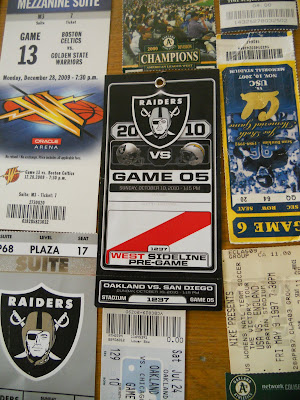 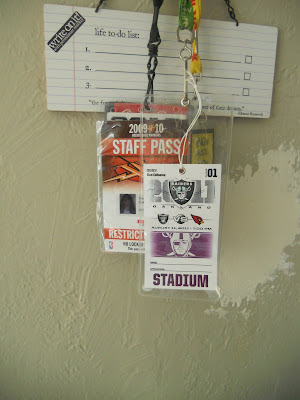 I had no use for these, but I’d been saving them because…well…I don’t really know. So over to the ticket collage they went 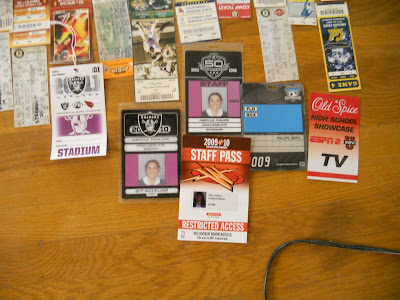 BTW, do you think the Raiders could get it together and spell either of my names correctly? 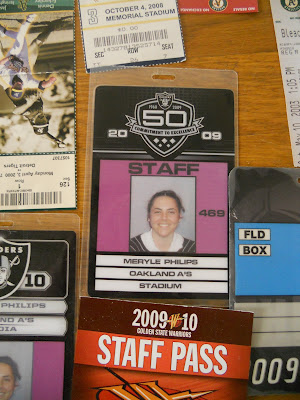 But even with the credentials I was still short, grrrrr 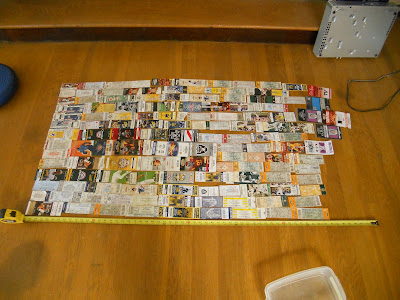 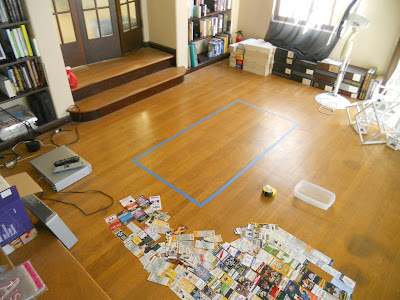 I thought of a lot of different ways to lay out the tickets: chronological order, sports team order, in a color gradient, by size…but ultimately I really liked the idea of having them be totally random. I’d still keep it in a grid-like, graphic pattern, but the tickets would be totally random and rotated in all different directions. I thought that would provide the most fun to look at because you’d always notice something different because there would be no pattern to follow 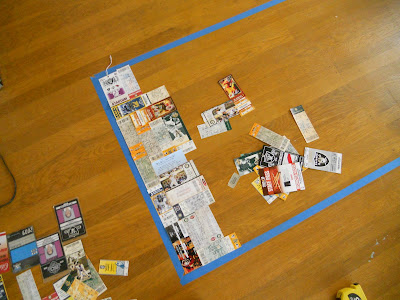 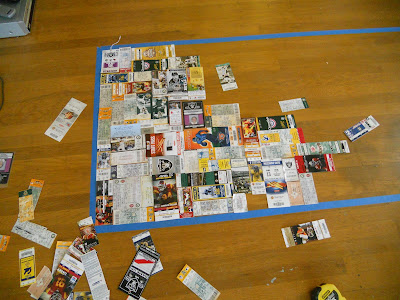 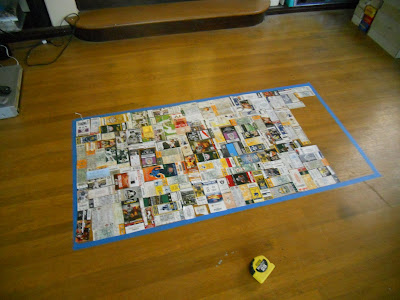 There are some slight gaps and overlaps 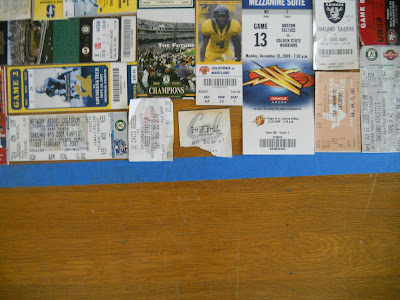 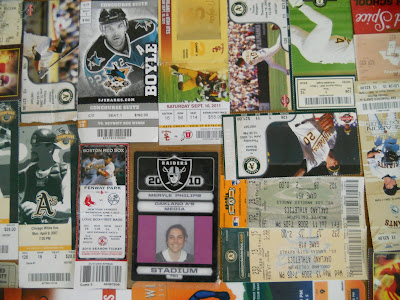 But overall I think it fills the space nicely.

The good news is that I am soooooo excited that this idea seems to work and that it’ll give our table a fun pop of creativity and personality. But the bad news is that we won’t be able to complete the table for another year or so 🙁 as I would guess it will take about that long to collect another few inches of tickets to fill the space and I wouldn’t want the corner of the table to be tickets from only one year when all the rest is completely random. We can build the table now, but down the line we’ll just have to pop out the glass so I can complete my collage 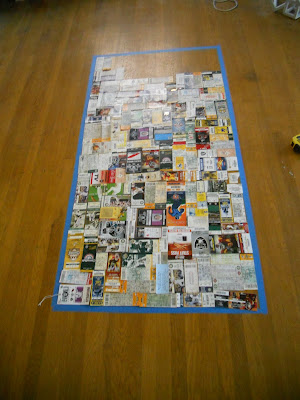