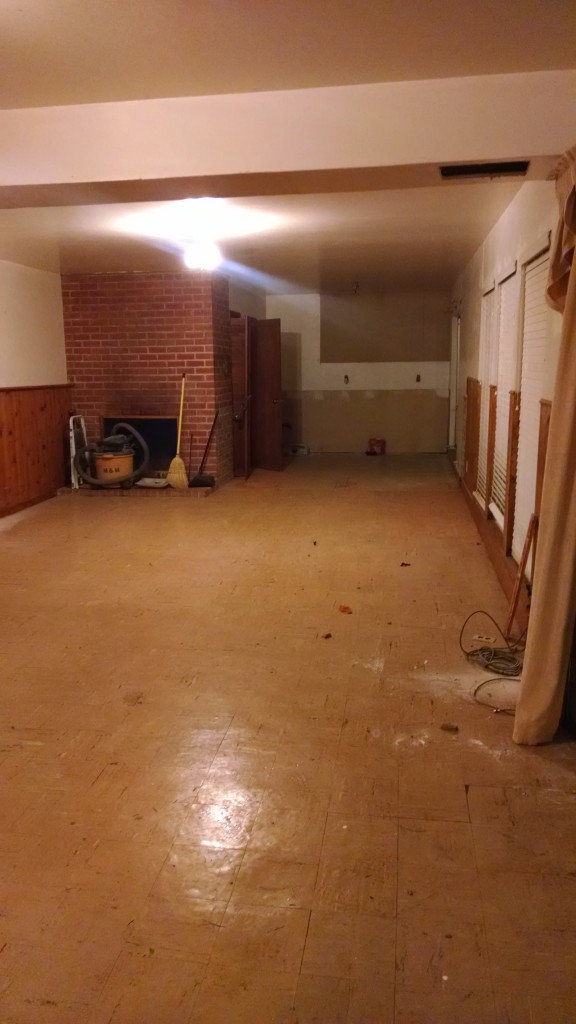 If you’re careful, asbestos is okay to encapsulate (if we put another floor on top of it), but for 2 reasons we decided that before we moved in we wanted it abated.

The first: we were getting a new furnace for heat and the old ducting was asbestos ducting, so it needed to be removed. For our bedroom having asbestos tile under the carpet wasn’t a huge deal because carpet would be going in, but we didn’t like having asbestos tile in the big room because even though we’ll eventually put in a different floor, we aren’t at that point yet and so we don’t want to be walking on or having Merritt crawling on loose asbestos tiles. So when we had the company quote us for the ducting, we also had them quote us for the flooring. I’m willing to DIY a lot of stuff, but this isn’t something you really want to DIY unless you really know what you’re doing. Our agent told us that we could expect to spend about $1500 to have the ducting removed, so when they quoted us $3500 for everything we opted to go for it. Better to get it all done now.

We thought it was just going to take 2 days, but it actually took them 4. It was annoying that things took longer because it pushed back the furnace replacement (no one could be inside working while they were here). Apparently this week is Asbestos Awareness week, and like I said Monday I would be posting something about that today. The Mesothelioma and Asbestos Awareness Center and I teamed up to spread awareness about how dangerous asbestos can be. 99% of the time I turn down these requests, but this felt really relevant, and, well asbestos and cancer sucks. So I thought I would give them some (uncompensated) love and accepted

I didn’t get any money, no specific plug or endorsement asked for, I just wanted to help educate people about some of the dangers of asbestos. It’s definitely important to remediate it right.

So it took 4 days to clear it out and sadly the cleaning left a really oily residue on the floors. Luckily CBH and his girlfriend were over a DAY BEFORE the move to help us clean it up 🙂 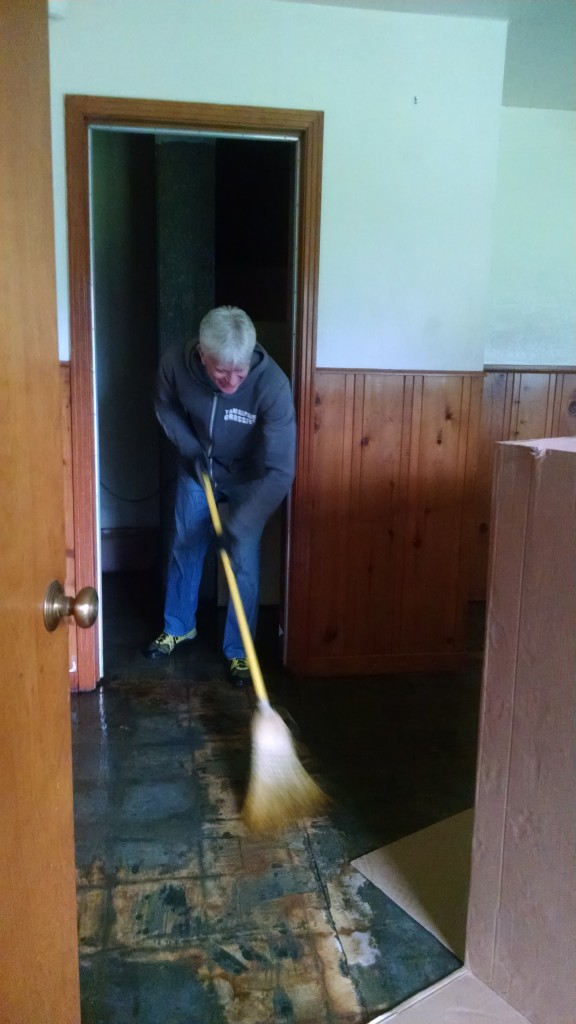 It involved pouring A LOT of cleaner all over the floor and then scrubbing the shit out of it. It wasn’t fun, so we are thankful for their hard work.

The residue that was left was from a product they used to help remove the glue from the tiles. It was especially difficult to get the glue off in the big room, so this room was especially oily. And our plan is to live with the concrete floors for a while and in order for us to have painted them to seal them the concrete really needed to be cleaned well. Once they were all clean and the furnace had been replaced (they uses this room as a staging area for their materials) we were able to paint it.

We used a porch paint – just simple and cheap. The color we used was Benjamin Moore Flint. We had almost a gallon leftover from another job (the client didn’t want to keep it) and so it just cost us the price of another gallon. I like dark floors and this felt like a good, dark neutral.

Because we had to paint this after we moved in, we painted it in 2 shifts. We tried to have the movers put everything along one wall, but they didn’t really follow great directions, so we had to sort of corral everything together. Once things were together on one side we could work on the other side. So one night after the girls were asleep we got to work. Chris had done one more cleaning earlier that day and set up the fan to make sure it was allllll clean. So when they were asleep with the help of a fan we were able to get to painting. I did the cut-ins 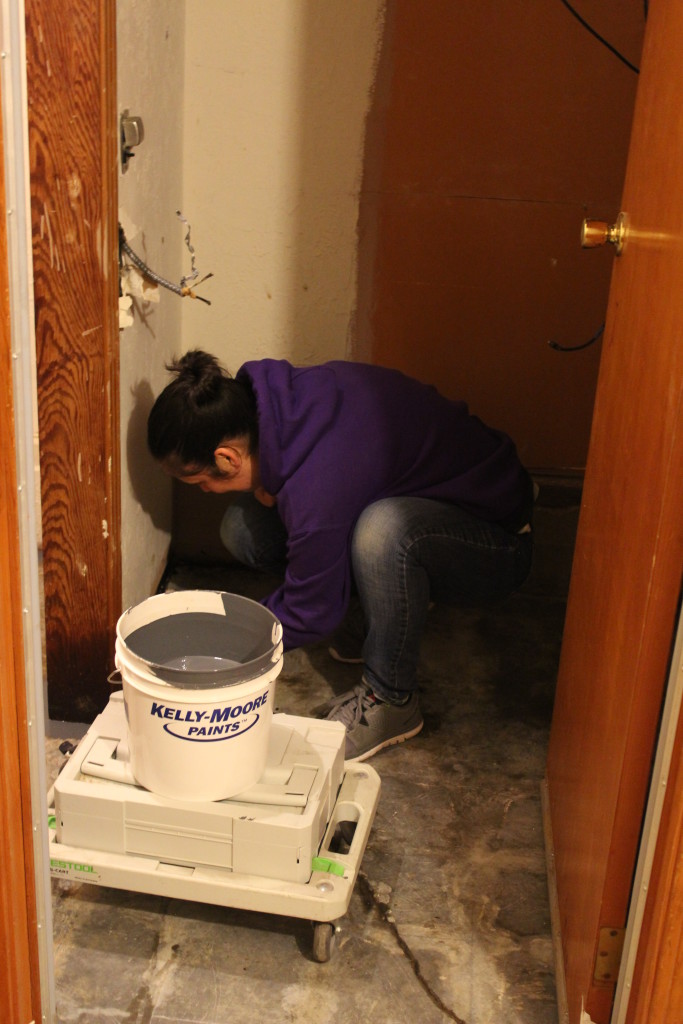 And Chris did the field 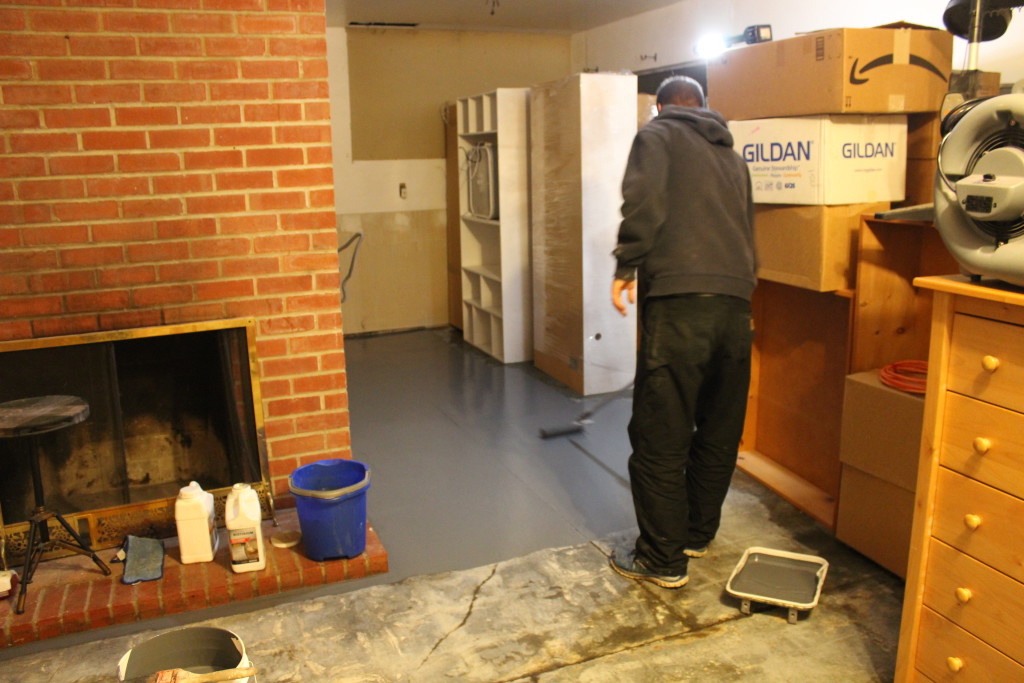 That’s our general painting MO these days. It’s a strategy that works well for us. Chris is fast as fucking hell with a roller, and I like the meticulousness of the cut-ins, so we’re a good team.

We got 1/2 done the first night

Then a couple days later we moved everything over and did another cleaning. It was the weekend and Zoe was eager to help Chris out 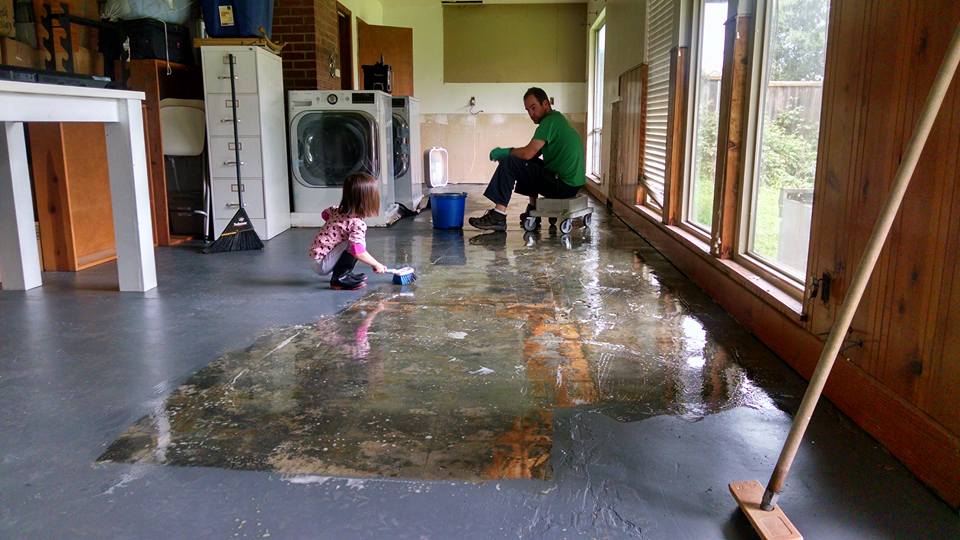 And again, with the help of the fan we were able to get it painted that same night after the girls went to sleep. It took a while – almost 2 weeks – to go from asbestos tile to painted floors, but that’s how we got here 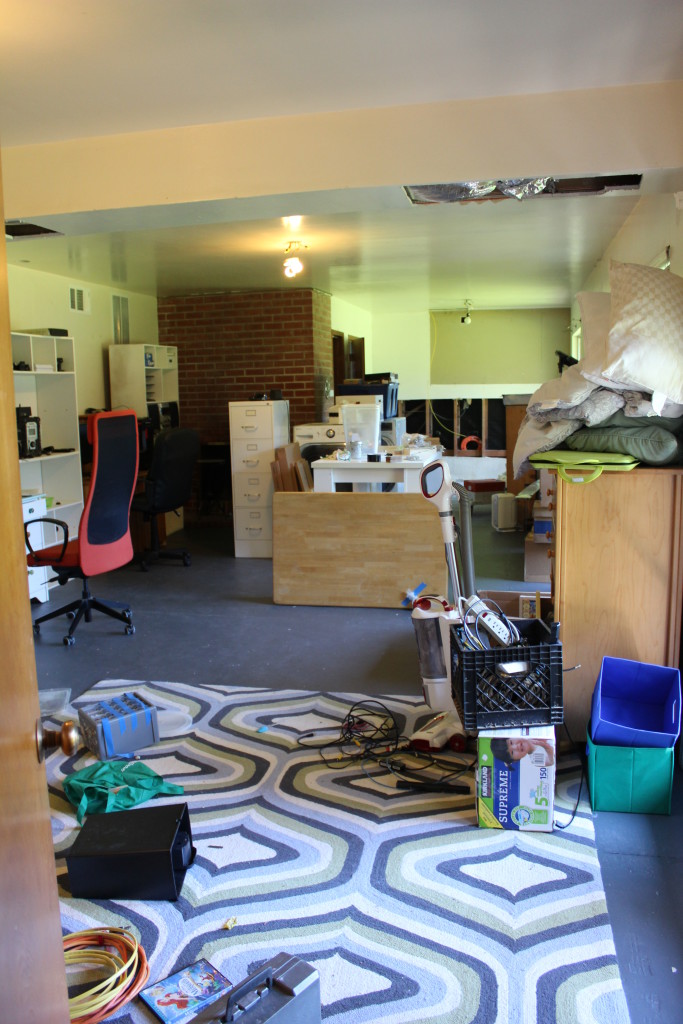 I got several comments (both on Facebook and email) a while ago when we first posted about the house about the floors in here. Many people suggested doing a skim coat or polishing the concrete and having that be the floor in here. I admit that I totally like that look and it is incredibly practical for the space (living area, office, utility), but man, concrete is HARD. That may sound ridiculous because DUH concrete is fucking hard, but it is HARD to stand on. I also have really bad knees (I had knee surgery from soccer when I was 19). I like comfy floors. And concrete starts to really hurt my feet, knees and hips after about 15 minutes. Yes, I’m a full on sissy. Who cares. But I DEFINITELY want this floor to be really comfy because we will be spending a lot of time down here in the decades to come. Of course, finishing the flooring in here won’t come for a while (months, or more likely years), but I think my front runner for the time being is cork. We’ll see if that sticks, but for now it seems like it serves all of my requirements: one floor throughout the space, comfy, utilitarian friendly, durable. We’ll see how things shake out when we actually lay flooring in here (like I said before, most like a couple years), but at least it’s nice to have the asbestos out for now.