Chris and I started an annual tradition a couple years ago and decided that we would go to a college football rivalry game every year. We love college football and are pretty apathetic about the holidays so rivalry weekend coinciding with Thanksgiving was like a dream come true 🙂 The only kicker was with Zoe being so little we wanted to pick a game close so that she could enjoy the fun too. So we decided the Civil War (Oregon vs. Oregon State) would be the perfect fit.

Thursday we woke up and headed north for Eugene, OR. We stopped at a friend’s house in Sacramento around lunchtime and crashed their Thanksgiving for a bit 🙂 I had a photo of their cutie pie son Louis and Zoe playing, but then I got a new phone yesterday and it lost my pictures. Damnit.

After we hung out with them we got back on the road for Dunsmuir, CA. We picked this place for 2 reasons. 1) Chris and his friend we on a hitchhiking trip during their Spring Break in college and hopped on a train that derailed in Dunsmuir and 2) it was an excellent halfway point (almost exactly between Oakland and Eugene.) Wanna know the coolest part? We stayed in a converted railroad car! It was so cool! 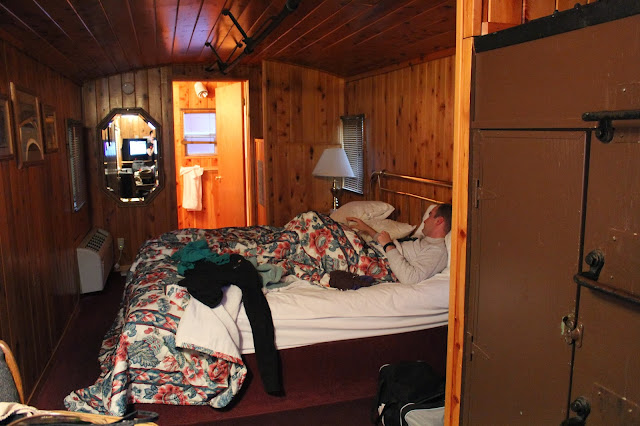 I will admit that it was a little kitschy (or a lot), but it was also totally awesome 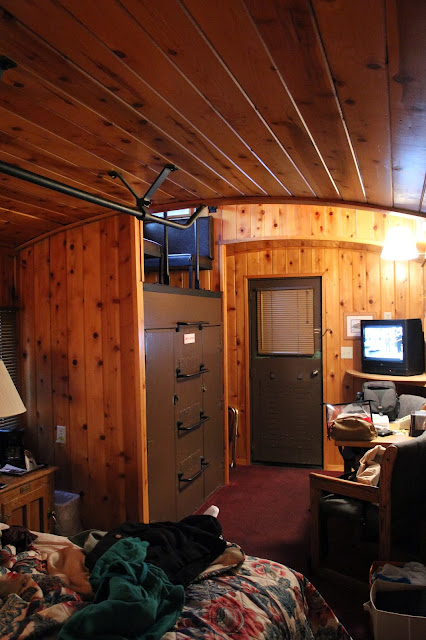 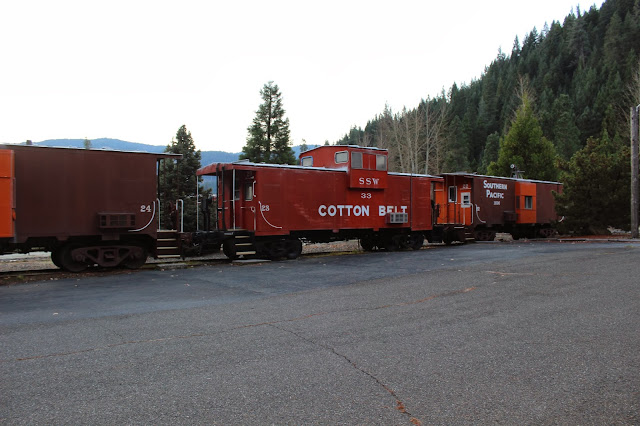 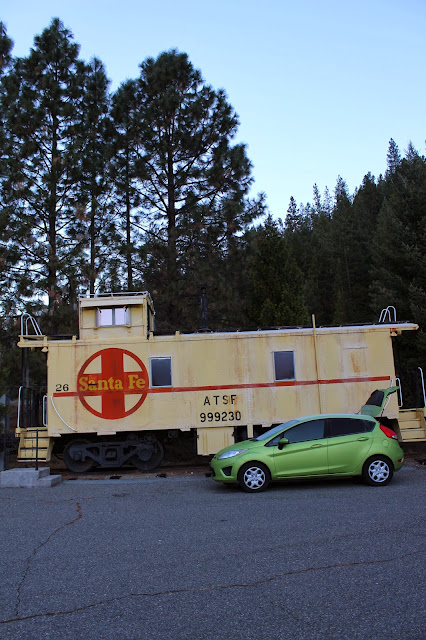 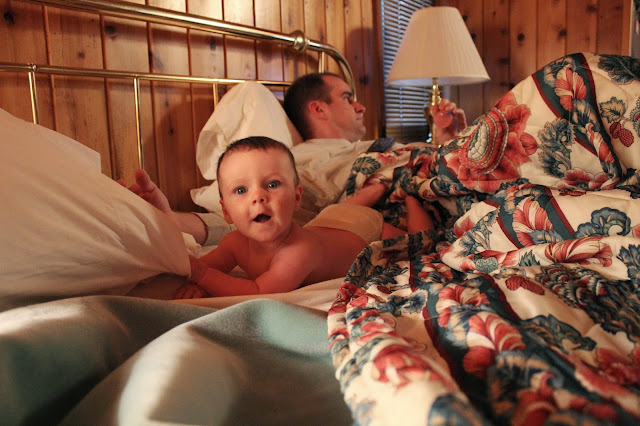 In the morning we headed for Eugene. The game was at 4pm so we had a little time to hang out before we left. We knew it would be cold and Autzen is supposed to be super loud, so we were a little nervous for how Zoe would do. But we bundled her up, took her noise reducing headphones and walked on over 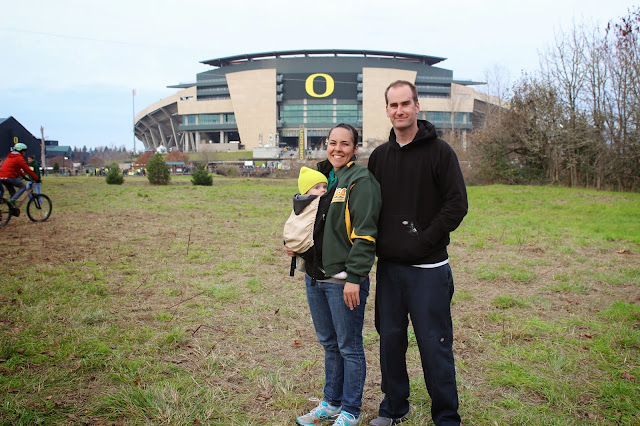 We like to get to stadiums early and walk around, and there was a lot to see here. They had a really cool pavilion (that was heated) with lots of food and a live band 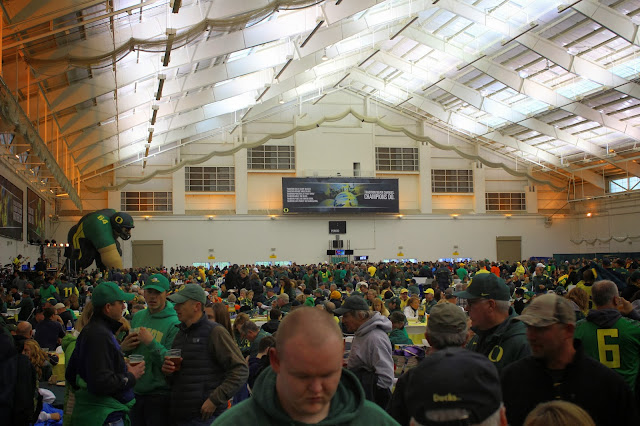 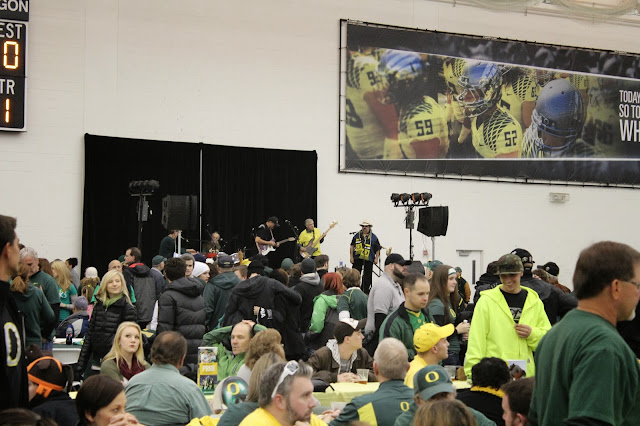 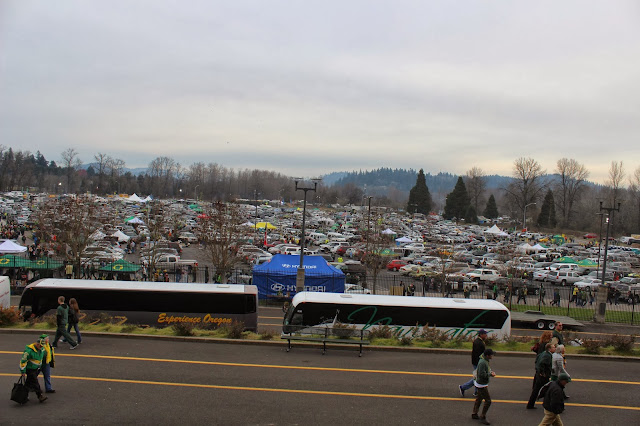 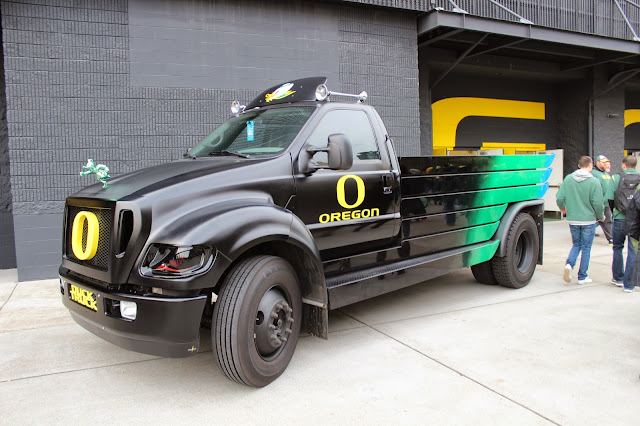 The stadium was really beautiful. I especially loved all the exteriors of the surrounding buildings because they were a great charcoal color that stood in awesome contrast to the lush scenery around 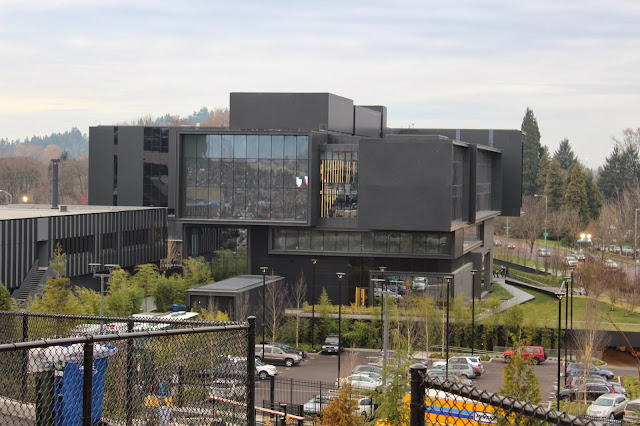 Once we walked around a bit, it was time to go inside 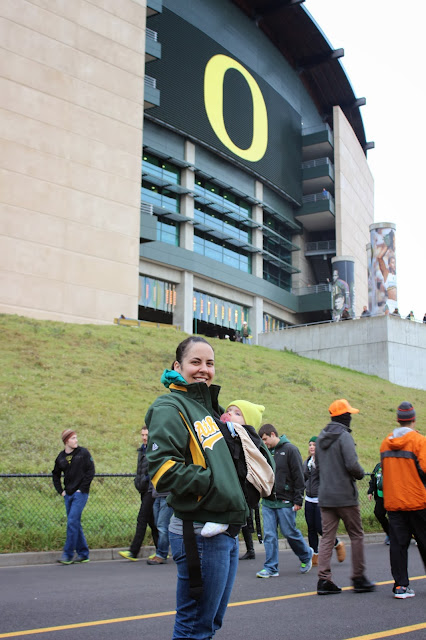 Our seats weren’t bad (really no seats in the whole place seemed too bad) and the field was gorgeous. Though both marching bands were decent, nothing beats Ohio State 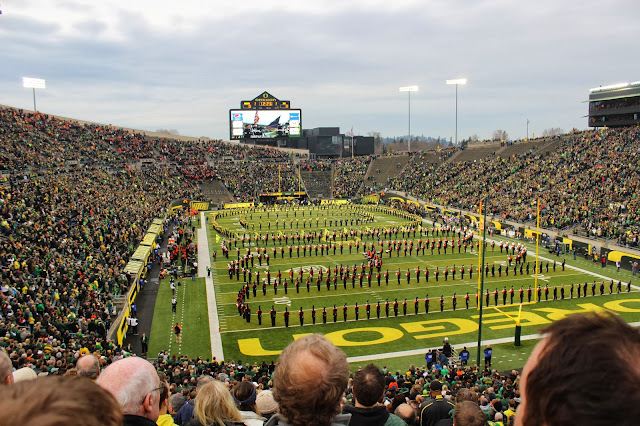 The best part of the game was how AMAZING Zoe did. She was a fucking champ. It was amazing. The walk from our hotel to the stadium was about 1 1/2 miles. We thought she might fall asleep, but in true Zoe fashion she didn’t because there was way too much to see. She finally did when we got inside and slept for about the first half of the first quarter 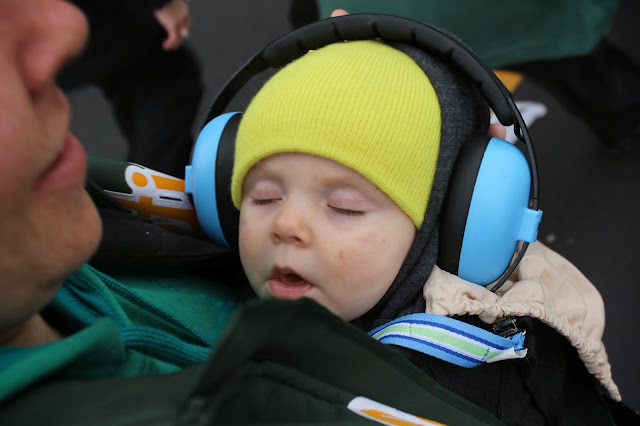 I thought if we made it through 3 quarters it would be a success, but she made it the entire game and only fussed the last 2:30 minutes. Literally, that was it. She was GREAT. She was bundled up in a ton of layers, her headphones blocked out the (very) loud stadium and she was happy as a clam 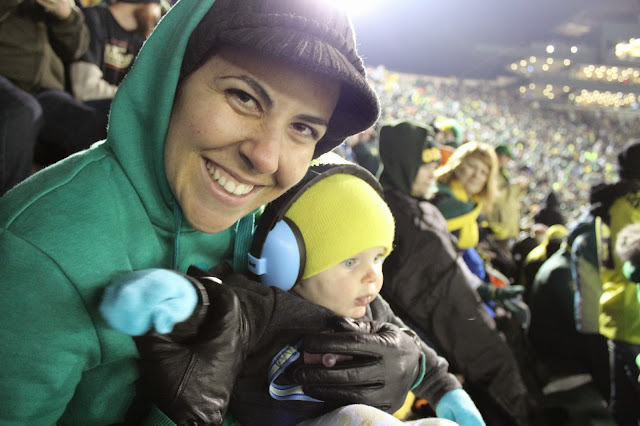 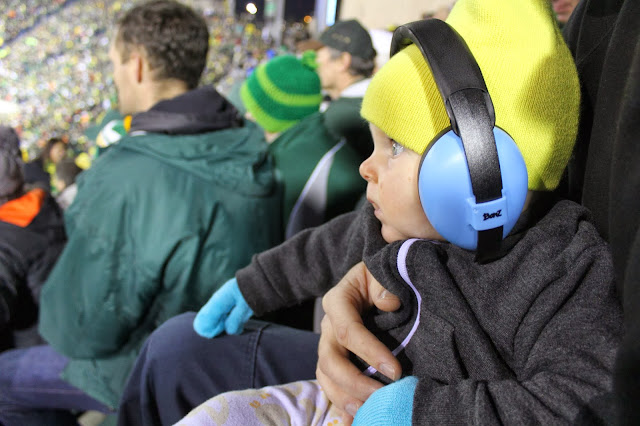 It was so awesome. And, as football fans, we couldn’t have been prouder 🙂

The game was awesome as well. Though we did find ourselves rooting for Oregon State (the Oregon fans we were around we a bit dick-ish), and so that kind of sucked that the lost in the last couple minutes. But, nevertheless, it was an awesome game to have seen 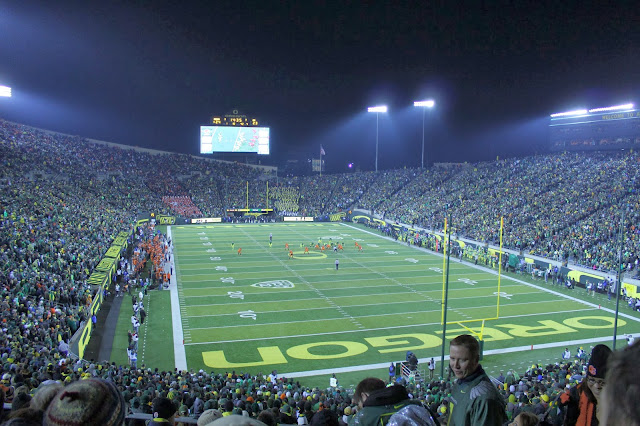 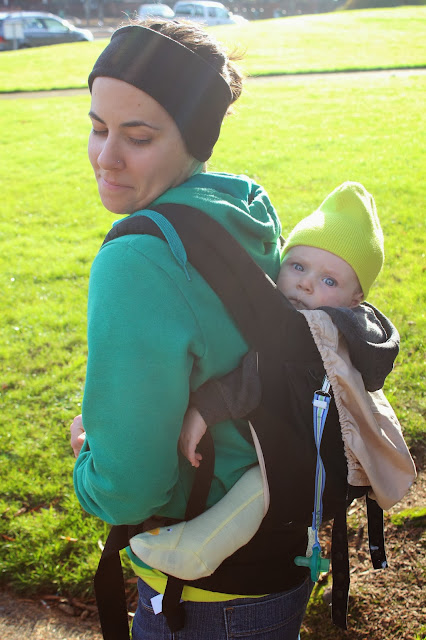 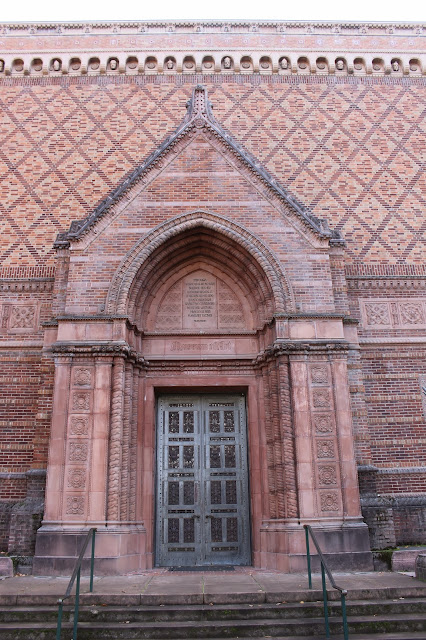 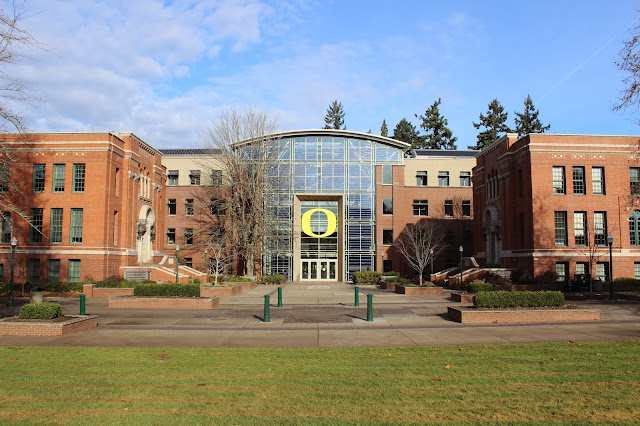 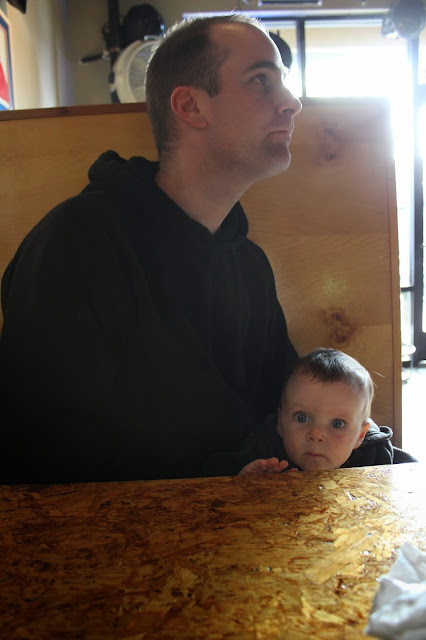 We were a little surprised about how quiet the town was. It was Thanksgiving weekend, but it was also rivalry weekend so we thought we’d see more people out.

You might ask why the title of the post is “At Least the Football Game was Fun” ??? Well, Zoe had a really hard time all weekend. We weren’t really sure what was up. Besides being at our friend’s house, being at the football game and spending a couple hours walking around Eugene, Zoe was out of sorts. She was really fussy, refused to sleep, and just seemed not herself. It was kind of a bummer. But I realize we were also asking A LOT of a (nearly) 6 month old. So instead of staying through Sunday, we decided to come home early and do the nearly 9 hour drive on Saturday afternoon at about 3pm It was a rough doing it all at once, but once we got her to sleep, she was fine. And it also gave us a day at home to catch up on things around the house. Don’t get excited and think we worked on the house though, sigh 🙂 But we DID hang our Christmas lights 🙂

I hope everyone had a great weekend!

Now, time to work on the house. Hopefully.

« Happy Thanksgiving!
An End to Those “Curtains” »