Friday I took this picture… 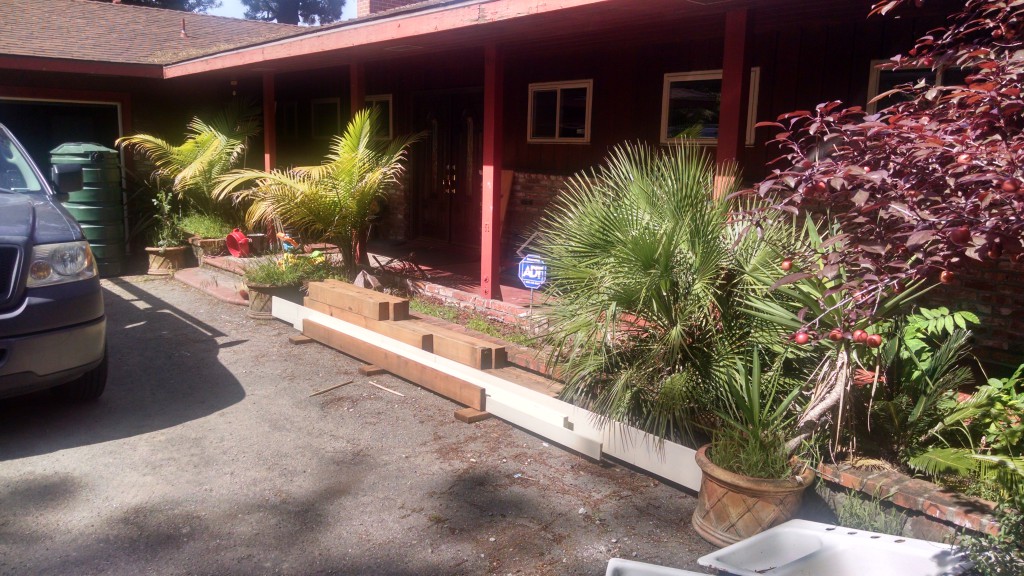 … And asked the folks of Craigslist to help rid us of them. There was nothing wrong with them, they just aren’t our style. I actually really do not like palms. I’m not sure what it is, I just have an aversion. I’m fine with them lining the street, but I do not like them in my yard. Again, I cannot find any actual reason that makes sense, they’re just not my style.

I don’t like just ripping things and destroying things, so our posting told people that they could have these babies for free if they would just be so kind to do the work for us 🙂 Within an hour of posting we had someone lined up the next morning and 6 others in my email in waiting. Hooray!

So Saturday morning before I left for work at the A’s Mr. Palm arrived and quickly removed two of the three. But then he had a family emergency and had to go. Doh! 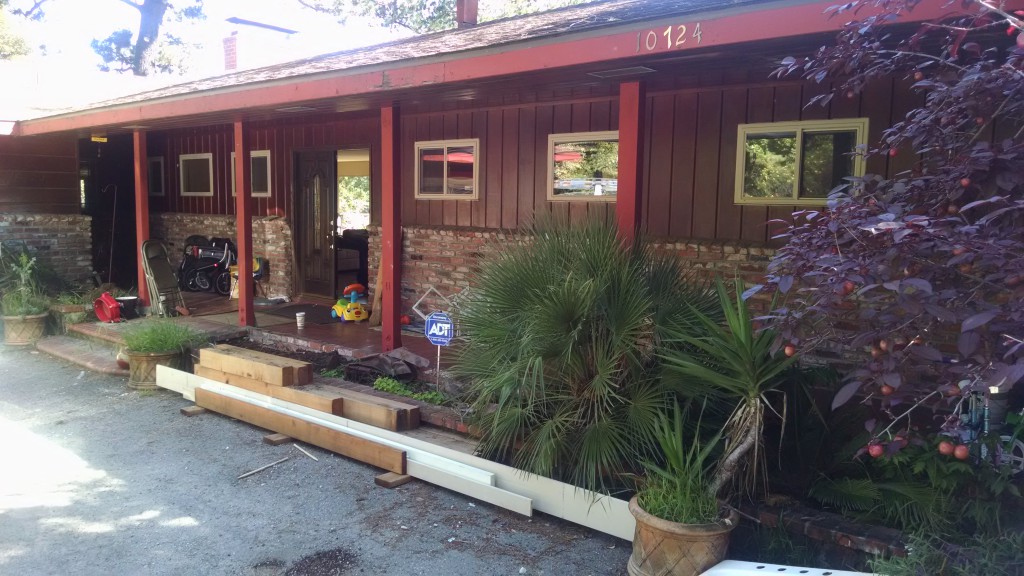 I drove to work, Chris wrangled the children and in true Craigslist fashion NONE of the 6 in waiting pulled through to get the last palm. Isn’t that always hour Craigslist goes? So yesterday morning before leaving again for work at the A’s I posted a picture of the last palm and attempted to see if someone would get it and within 90 minutes someone was at our house taking it, yay!!! Craigslist is so weird to me, people are either THE BIGGEST flakes, or just completely 100% on top of it. It’s really only one or the other, nowhere in between. And this guy was pretty awesome. I told Chris I wasn’t married to anything in the planters and he said the guy took two other plants and even gave Chris $20 for it. We said he could have them all for free, so it was kind of great for him to do that just because he was awesome. 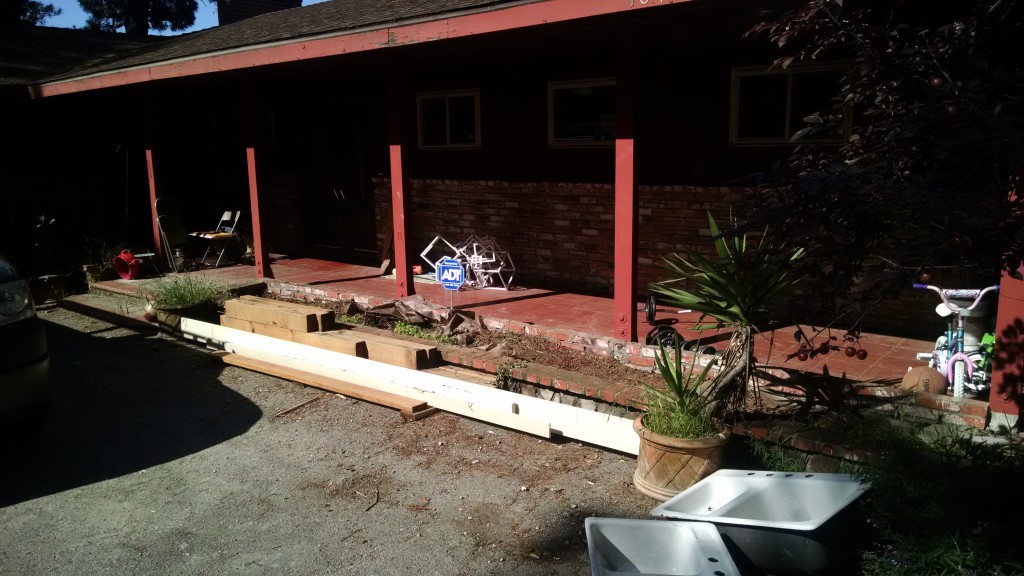 It’s so much more open than it used to be. I LOVE having those guys gone. It just opens up the house SO MUCH 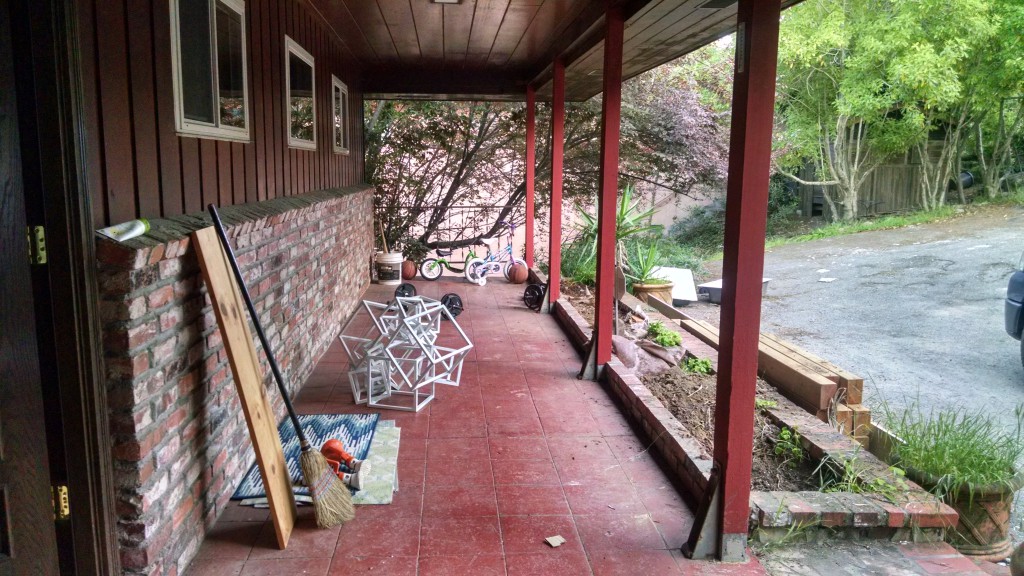 Now the question becomes what to do with the planters. I don’t really like annuals. But I have a reason for it this time: I’m lazy. Annuals are something I’d have to plant every year. And let’s be honest: I’m never going to do that. I’m also never going to water anything. I know this because we’ve had planter beds like this before and I’ve killed everything each year. Because I was lazy.

What could go here? Not annuals. Not anything I need to water. Drip can’t really be set up without noticing it or involving a pump…. SUCCULENTS! Chris actually had the idea. I was stumped and I couldn’t think of anything for the life of me, but Chris just popped the idea out: a succulent garden I love this idea for 3 main reasons:

1) I can be totally lazy: after the plants have been established they can be ignored 🙂

2) I can use a lot of attractive plants that are low. I don’t want the plants to block the view of the house. I love how open things feel now so I don’t want to take that away.

3) I think I can use a lot of great colors that will really pop against the darker color palette we’re going to go with. Heather, master gardener from Just a Girl with a Hammer commented to me on Facebook that plants really pop against a dark color scheme and that she wished she had gone even darker. Sold!

The big kicker is that I know NOTHING about succulents. So any help anyone wants to give me would be much appreciated 🙂 We won’t be planting until after the house gets painted, so we’ve got a couple months before things will be going in, but does anyone have some great resources on succulents that they have? Or any specific plants they love? Help educate me 🙂