Oh hi. Do you notice something different? Hehehehhehehehehehe 🙂

Hooray, the blog transformation is here!!!

I’ve been wanting to switch from Blogger to WordPress for sooooooo long. Like, YEARS. I never have done it because it just intimidated me. Well, I don’t know what finally kicked my ass into gear, but I decided it was time. So here we are! Along with that switch I switched domain providers because GoDaddy is annoying as shit. I’m using a company based in Berkeley that Chris has been using for nearly a decade. Seems like he’s satisfied with it, no? 🙂

Along with switching to WordPress, I was feeling like things needed a little bit of a freshen up. I wanted things to look less like a homemade blog (which it is, I mean, let’s not kid ourselves here), and I wanted the layout to reflect (what I feel like is) my style – clean, colorful, fun. And thanks to the WONDERFUL Sarah from Ugly Duckling House and her web design services Sweet Theory Design she helped me get everything done. I designed the logo and background and she got E.V.E.R.Y.T.H.I.N.G. set up for me. I’m a little bit of a moron when it comes to some of this technical stuff, so it was amazing to have her help me out so much and really walk me through everything. I’m still nowhere near where I’d like to be in terms of being familiar with WordPress, but I’m slowly learning things, so that’s good

There will be changes coming through the next couple weeks. I need to add several pages, learn how the Project Gallery works and update it, tweak things, fine tune…but I’m loving it. It looks clean and fresh, and that makes me happy.

The other change? We sold Malcolm. Who’s Malcolm? This guy

Yup, we sold the bug. This car was Chris’s dad’s, then his, then his sister’s, then his again. It’s been in the family a long time. And it’s been sitting in our driveway for 7 years. We’ve had the romantic idea of restoring it, but we finally realized that with two little kids, owning our own business and the prospect of getting another fixer….well, we’re a little busy. And who knows when we would actually get to it. So Chris decided to sell it. The BEST news is that the guy who bought it from us (last night) already has a ’67 Bug that his 14 year old daughter loves and wants, so he’s going to restore this one for her. Best sale ever. We felt really good about that.

And speaking of the prospect of a fixer – OY FUCKING VEY. Things have sort of taken a turn for maybe won’t happen this week. The sellers are being incredibly difficult. We’re at a point where we could potentially be walking away. That would pretty much devastate me. But they’re showing not very many signs of actually moving out and I don’t want to sign on a house that’s not vacant with how things have gone so far (rental laws in Oakland mean that we would essentially inherit a tenant with no rental agreement and the prospect of having to legally evict them). There should be more news next week. I wish I could share more, but we’re really in limbo at the moment, so there’s really not much more to actually share, unfortunately. I’ll just leave you with an adorable photo of the girls to keep me in a positive mood (jammies courtesy of my grandma) 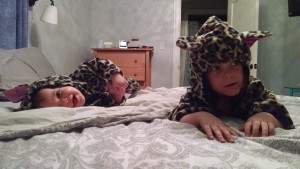