It’s been a long time since I posted about (or even thought about) our headboard. In fact, it’s been 3 months. Jeeeeezzz. So I finally decided it was time to get on it. About a month ago I finally ordered the fabric for it. I went with the solid antique velvet, instead of the pattern

I just figured it would be a WHOLE lot easier to upholster in this fabric rather than make sure the pattern was always lining up properly. And I worried I would get sick of the pattern.

I had the fabric, but I still needed the foam and batting to make it nice and fluffy. A couple weeks ago I went to a local craft/fabric store to check out what they had. I was thinking 2″ foam would make it super soft and scrumptious to lean up against and that at least one layer (maybe 2) of batting should go around it as well. Unfortunately, I wasn’t super pleased with the prices 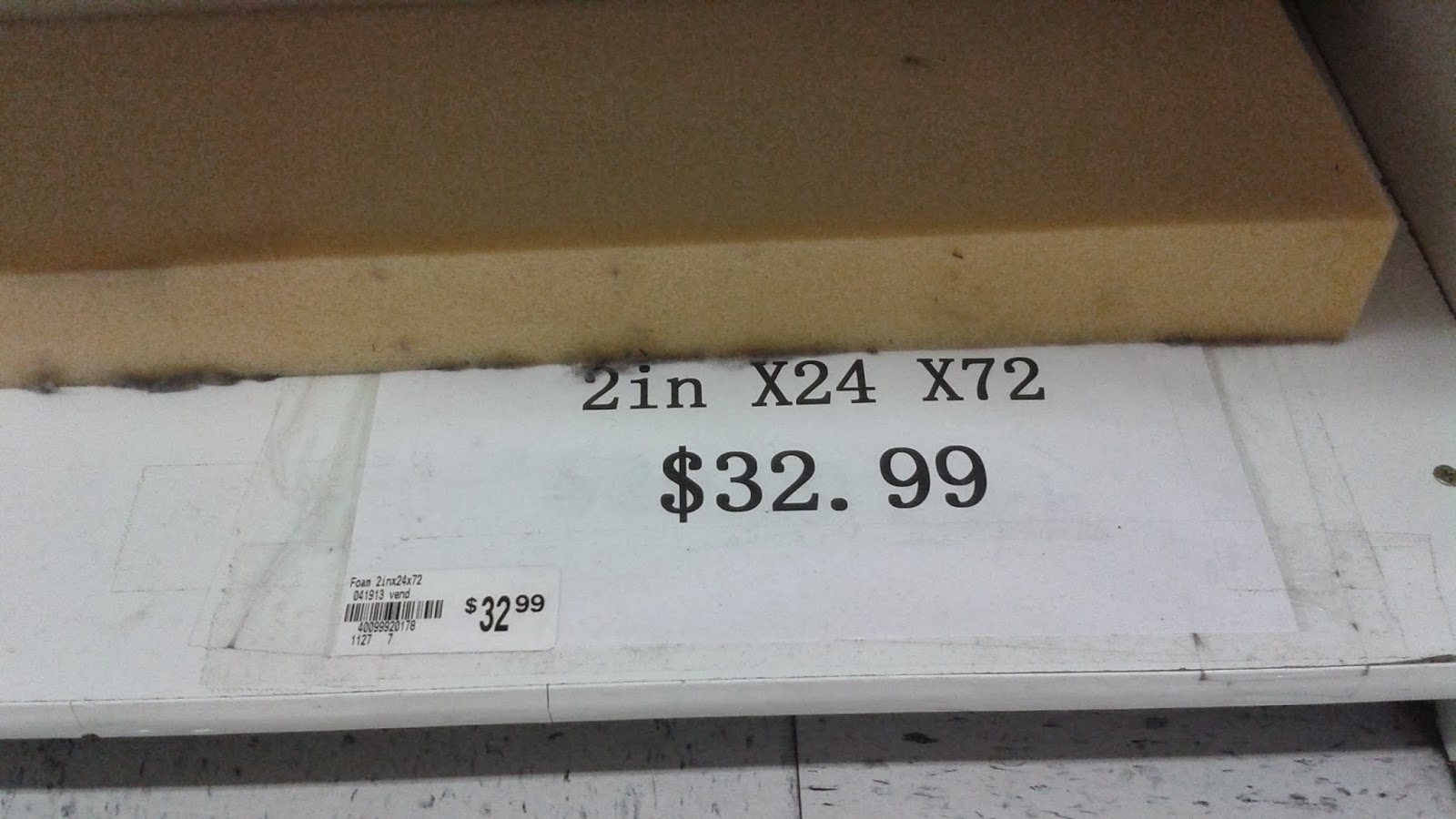 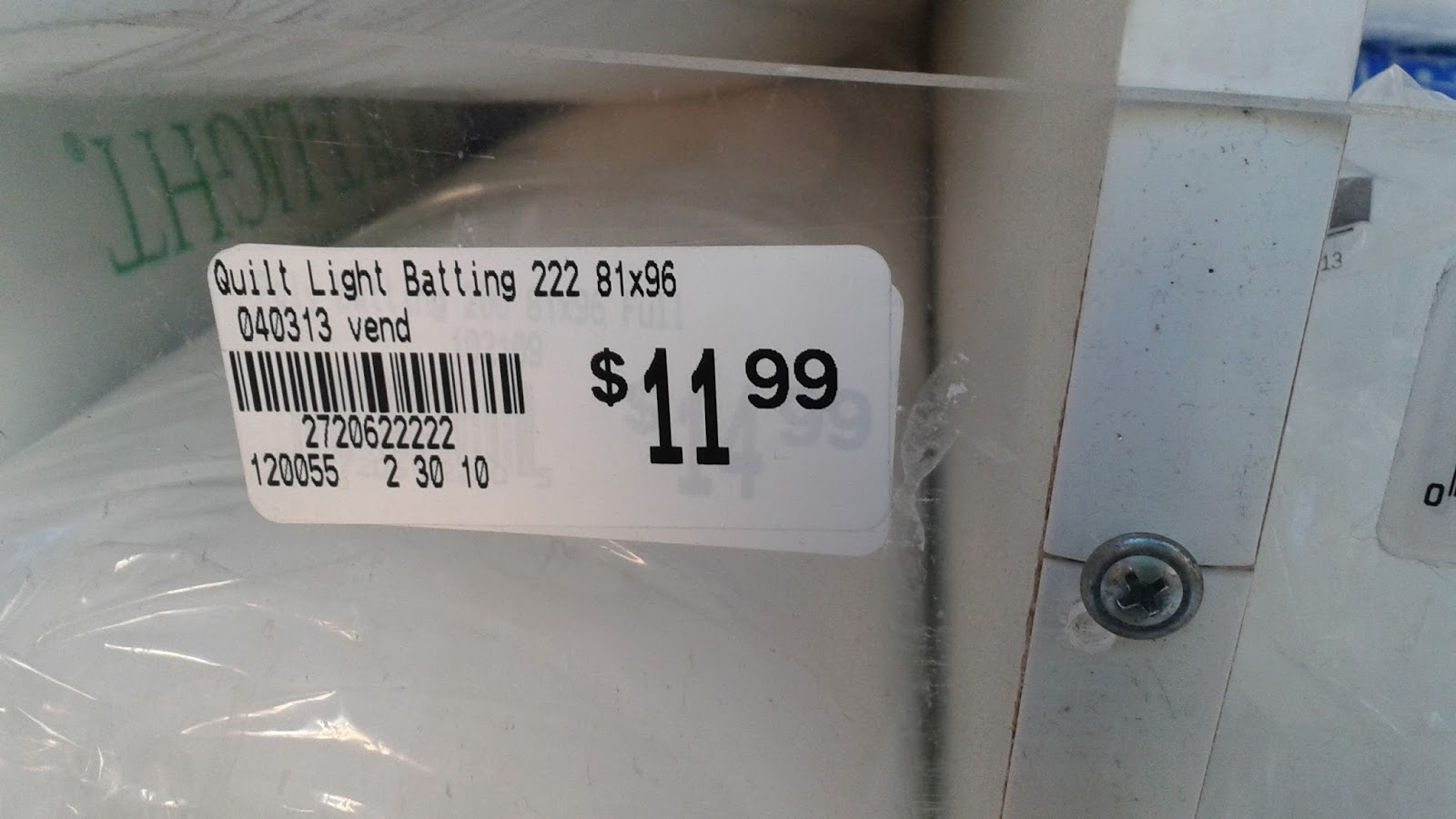 The price for the batting seemed decent, but that foam was pricey. I wanted the headboard to be tall enough so that when we sat up in bed our whole bodies would be leaning against it, and at 76″ wide, that would mean we would need several of those $33 pieces. In addition to the $12 roll of (not very plush) batting. I was looking at at least $111, plus tax. I vowed to find it for cheaper.

I hunted around online and definitely found some for cheaper, but when I factored in shipping, it honestly came out to almost the same price. And I couldn’t feel it to make sure it wasn’t too firm, soft, uncomfortable, or whatever.

Then I remembered that there was an upholstery supply warehouse on the drive that we make to HD several times a week (Bay City on High St. for any of you locals), so I figured I’d give them a shot. And I’m glad I did. Not only were their prices better, but the guy who was there was super helpful. I told him what I needed the foam for and he suggested I actually use 1 1/2″ foam (which was cheaper) because it wasn’t as tough as the 2″ so it would feel a lot more comfortable. I wanted to double up on my batting, and he thought one layer would be good enough (again, cheaper suggestion), but I opted to still get enough to double, just to make sure. My total came in (with tax) at just over $75. Not too shabby.

Then came the task of building it. Currently the bed is looking like this 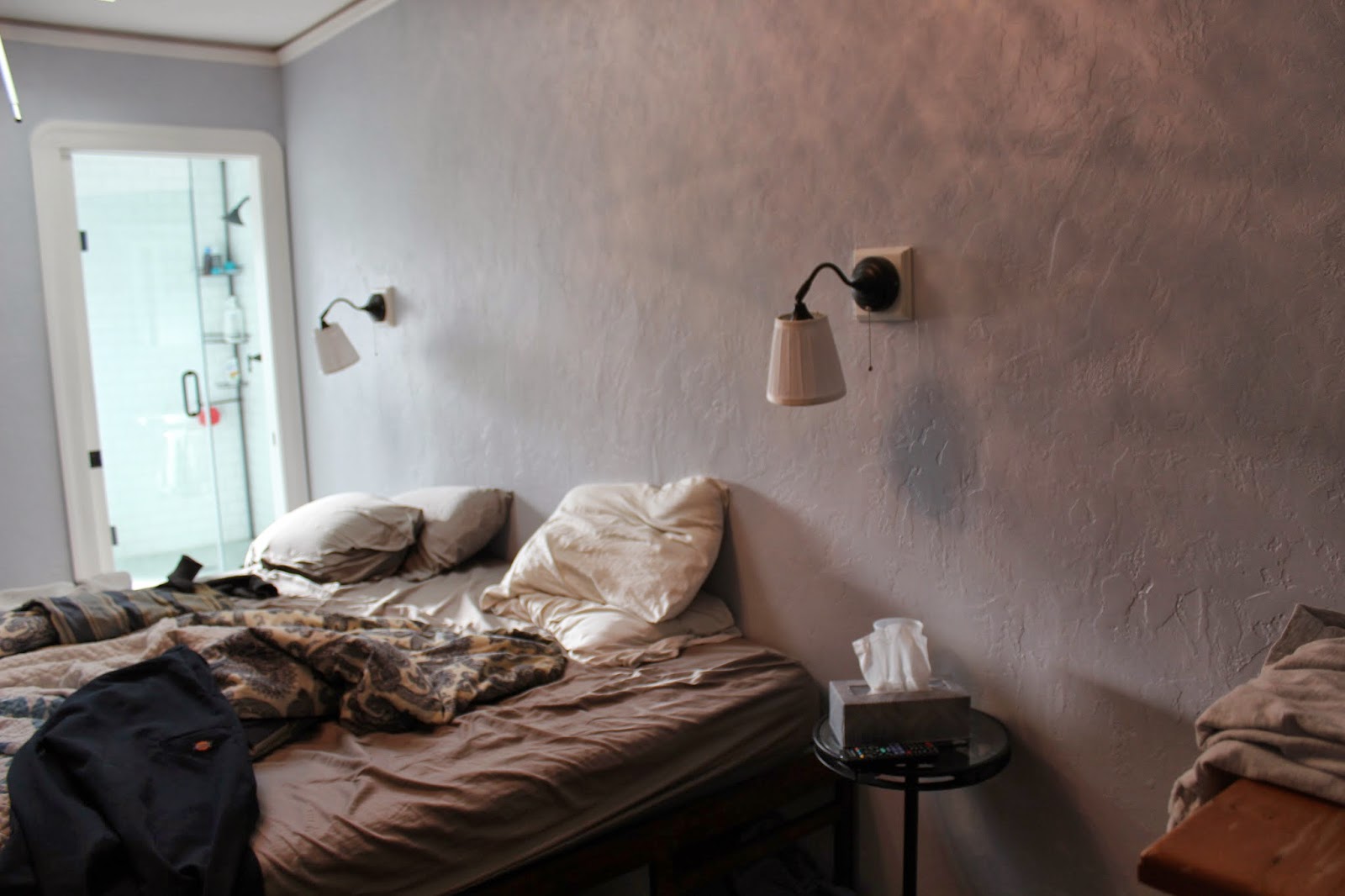 I sat in bed to figure out a good height and asked Chris to do the same to make sure the measurements worked for both of us – although Chris is 9″taller than me I have an “abnormally long” (as Chris puts it), torso, so the two measurements weren’t very far off. We settled on 42″, which would include a small amount that wouldn’t be visible behind the mattress. Then we took the piece of plywood and cut it down to size. We cut two little notches in the bottom because the headboard will slide down behind the mattress and rest on top of the plywood frame, and while it will be slightly wider than the bed frame we need to accommodate the face frames on either side 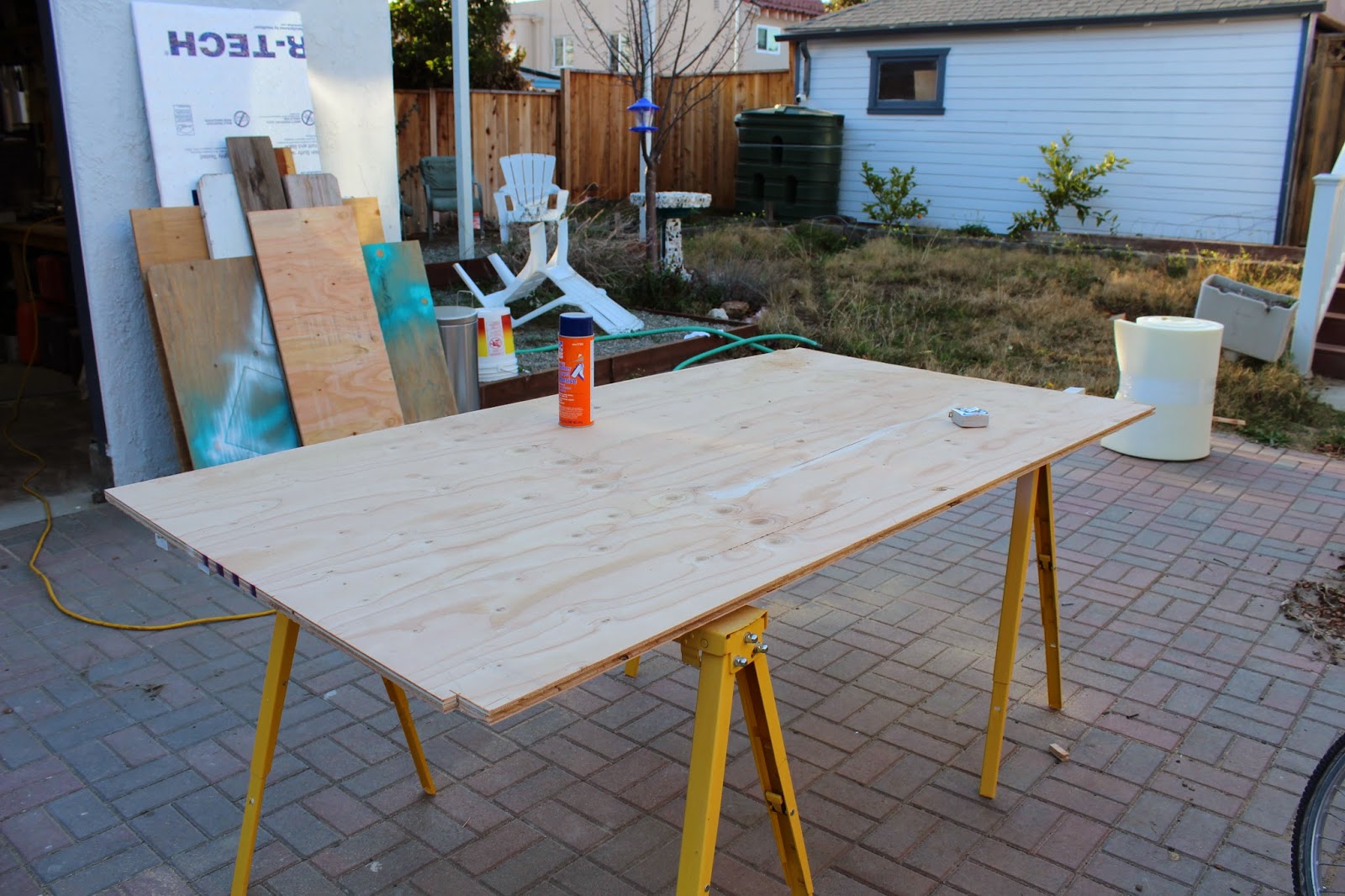 Once it was cut out, I brought out our adhesive spray and sprayed on 2 layers (in opposing directions) on the plywood… 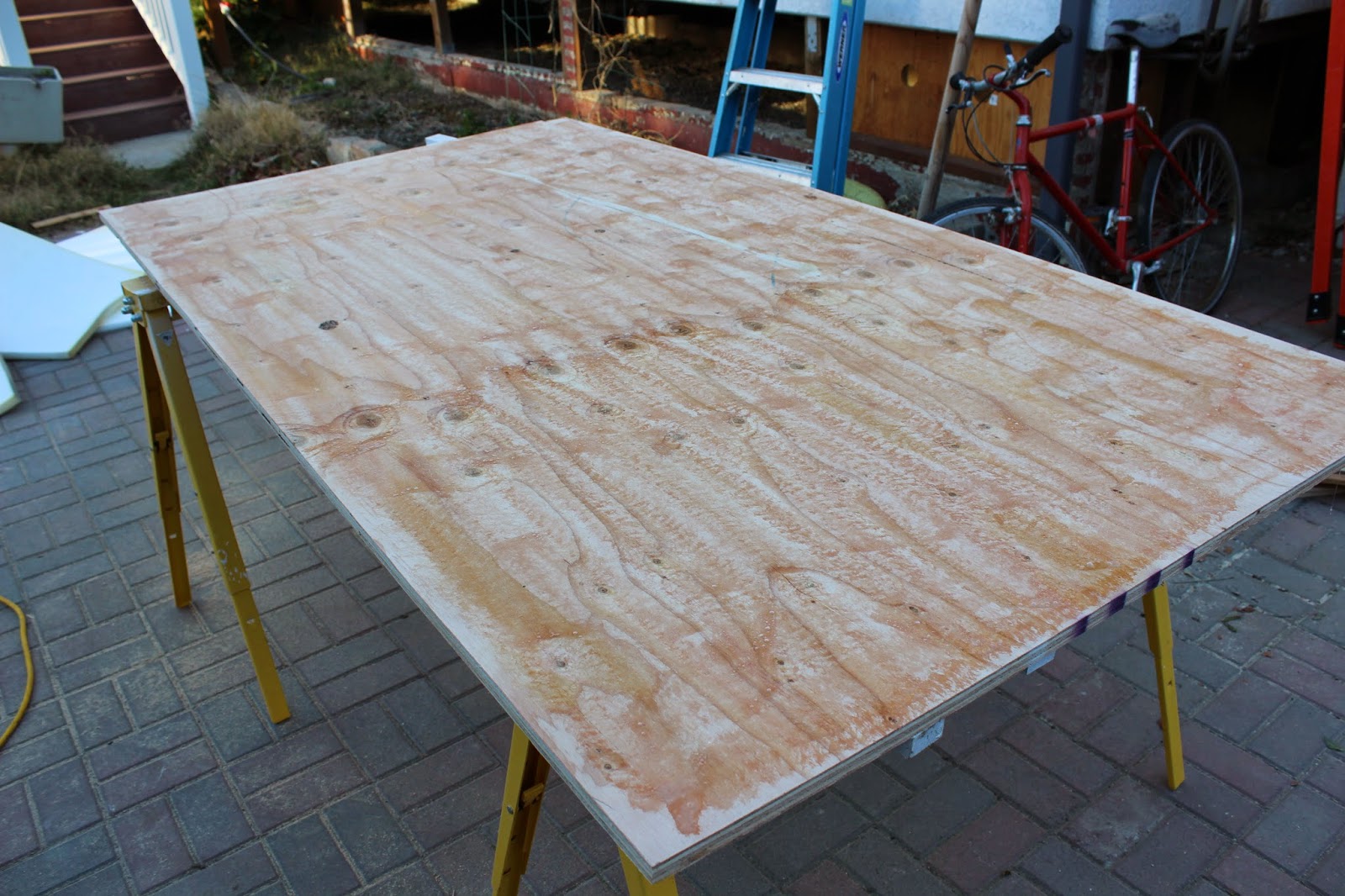 …and also the foam to ensure a tighter bond 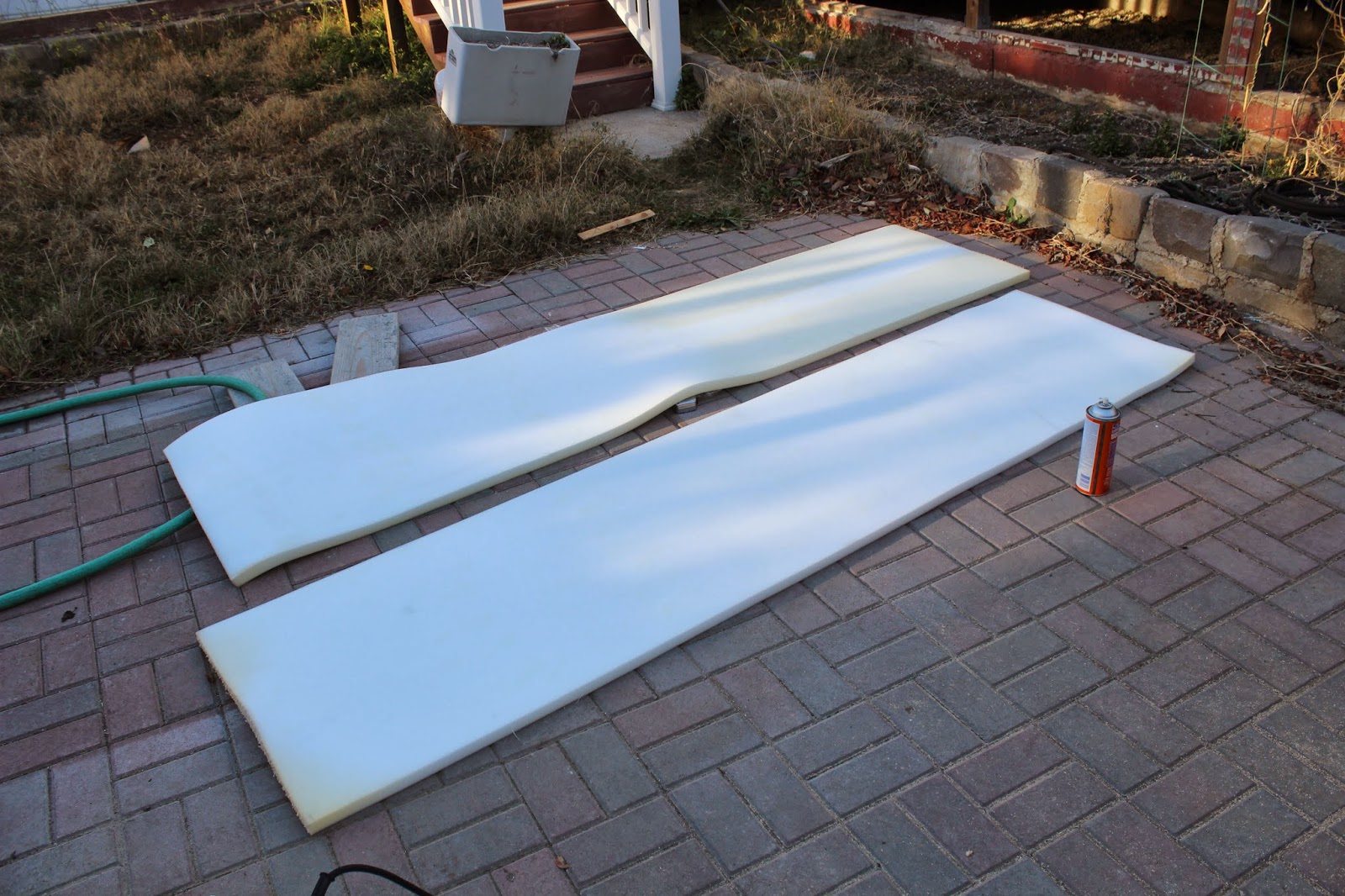 After I let it set for 5 minutes, I brought the foam over and started laying it out on top of the plywood and pressing firmly down to make sure there was a tight bond 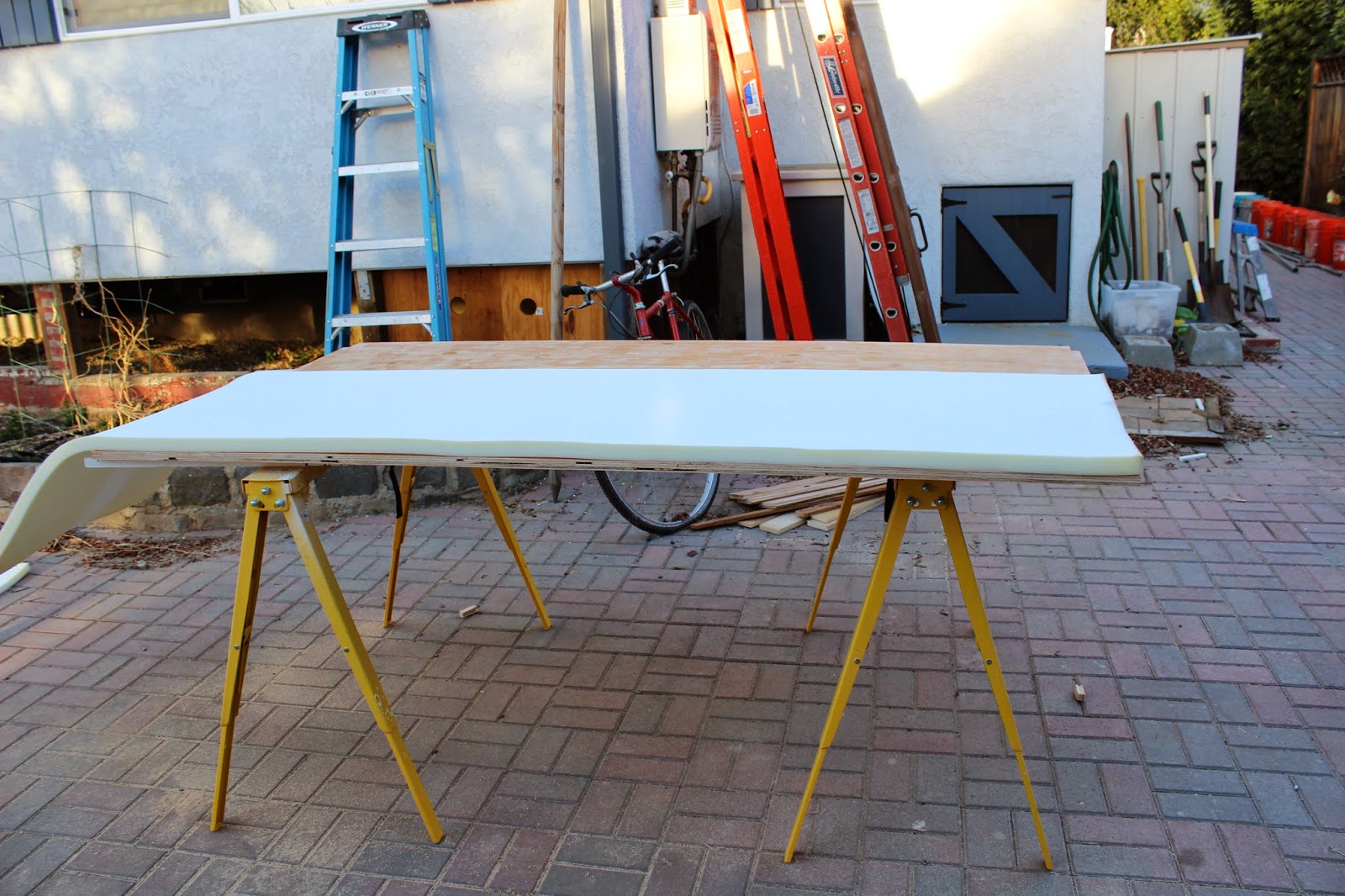 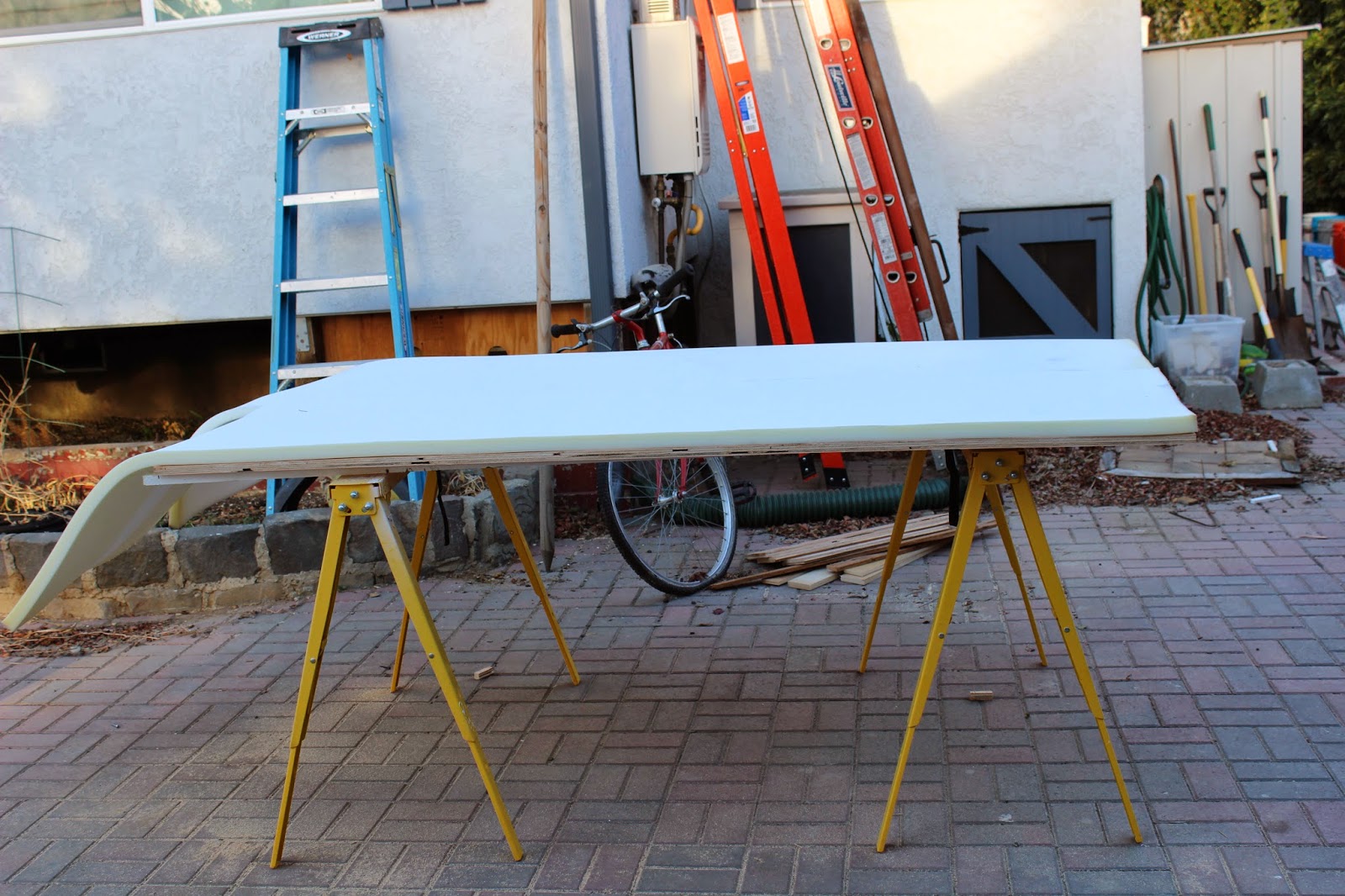 When it was done there was overhang on 2 of the sides so I set about cutting it down. I used a utility knife at first, but that was extremely slow going because of the thickness of the foam, so I brought out a saw instead. It didn’t result in the cleanest edge (but it’s getting wrapped in batting anyway, so who cares), but it worked 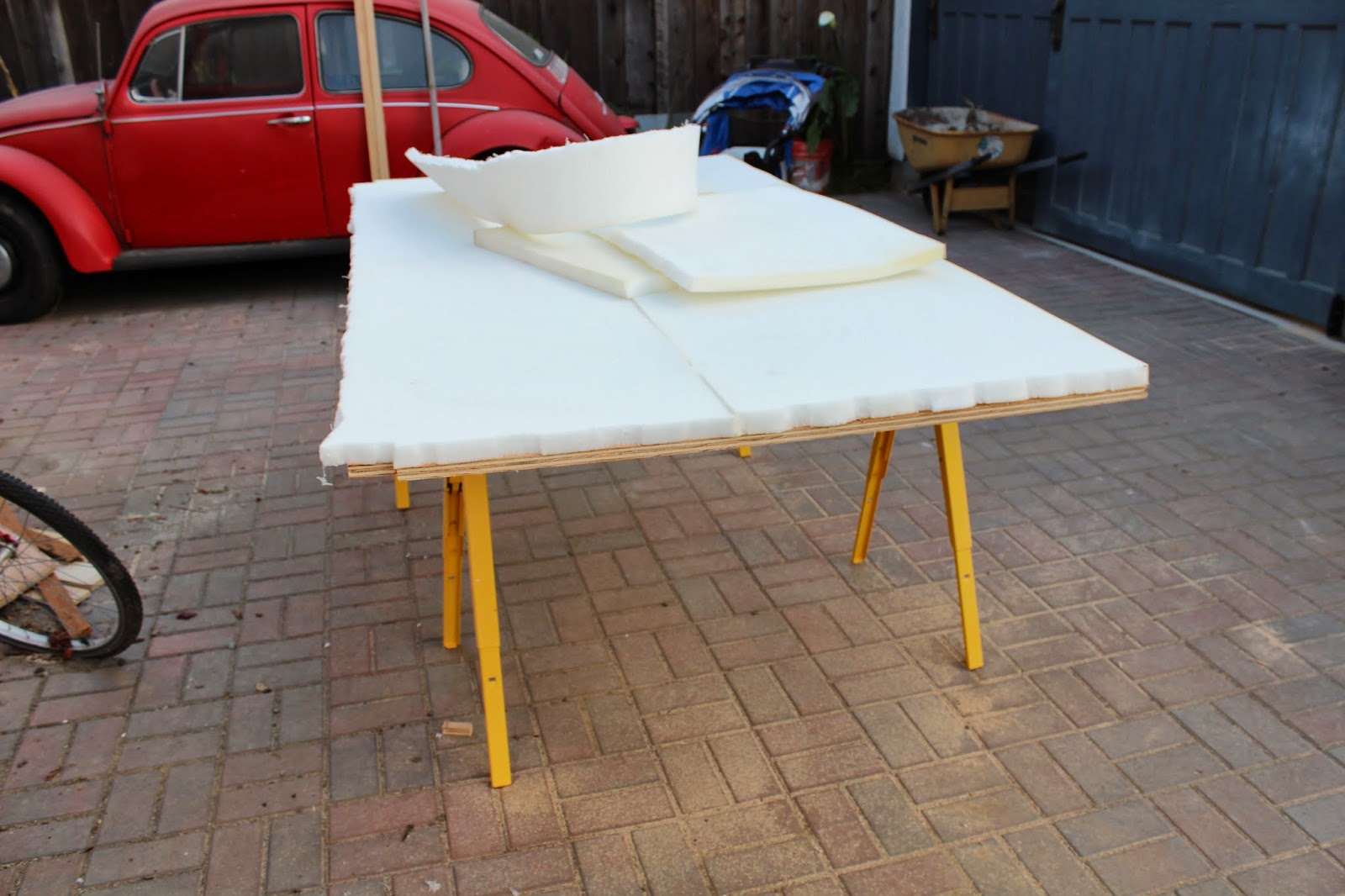 Not the most beautiful cutting job… 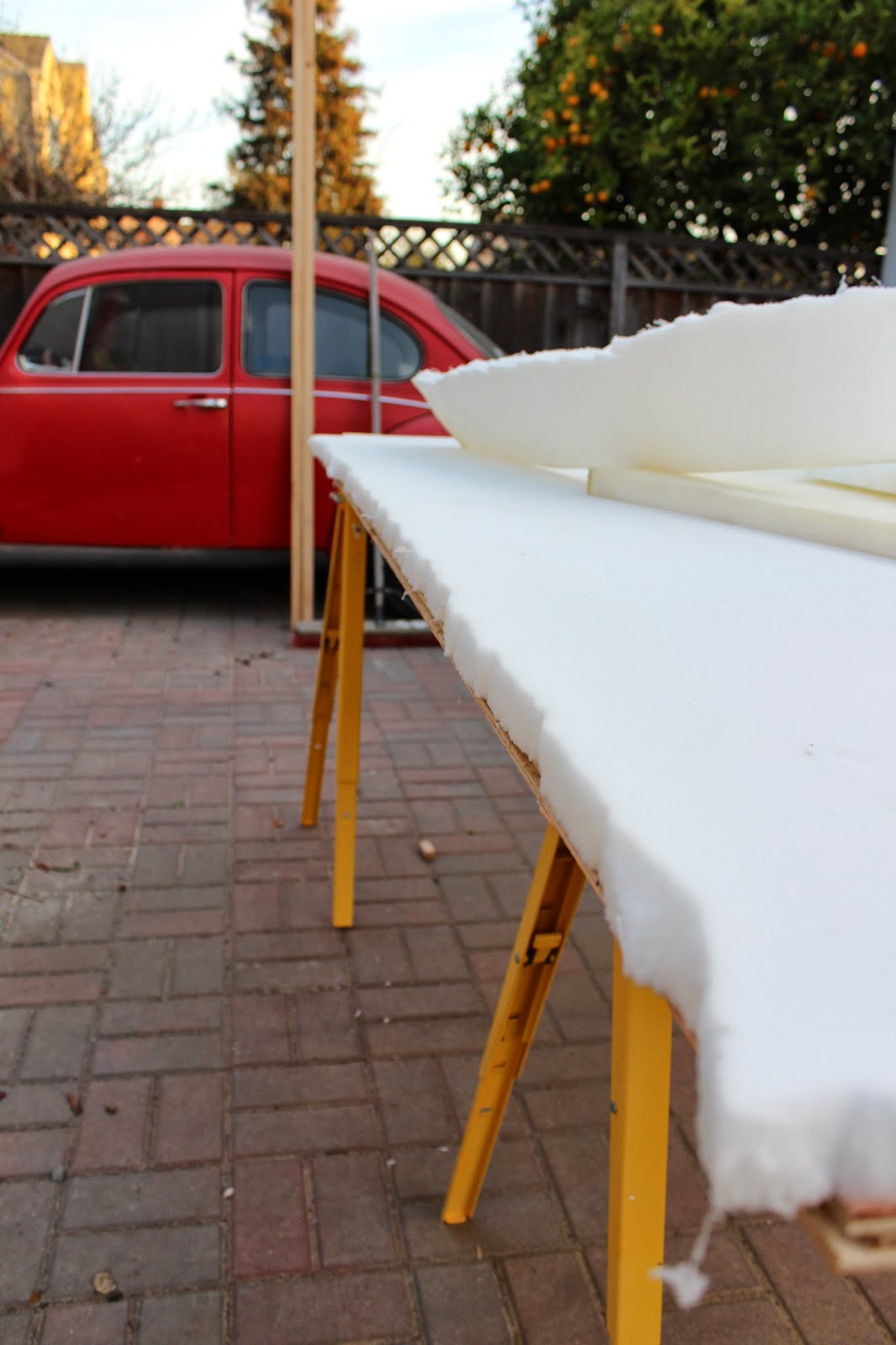 While I waited for the adhesion to set, I went back inside to prep the fabric and batting by getting everything laid out 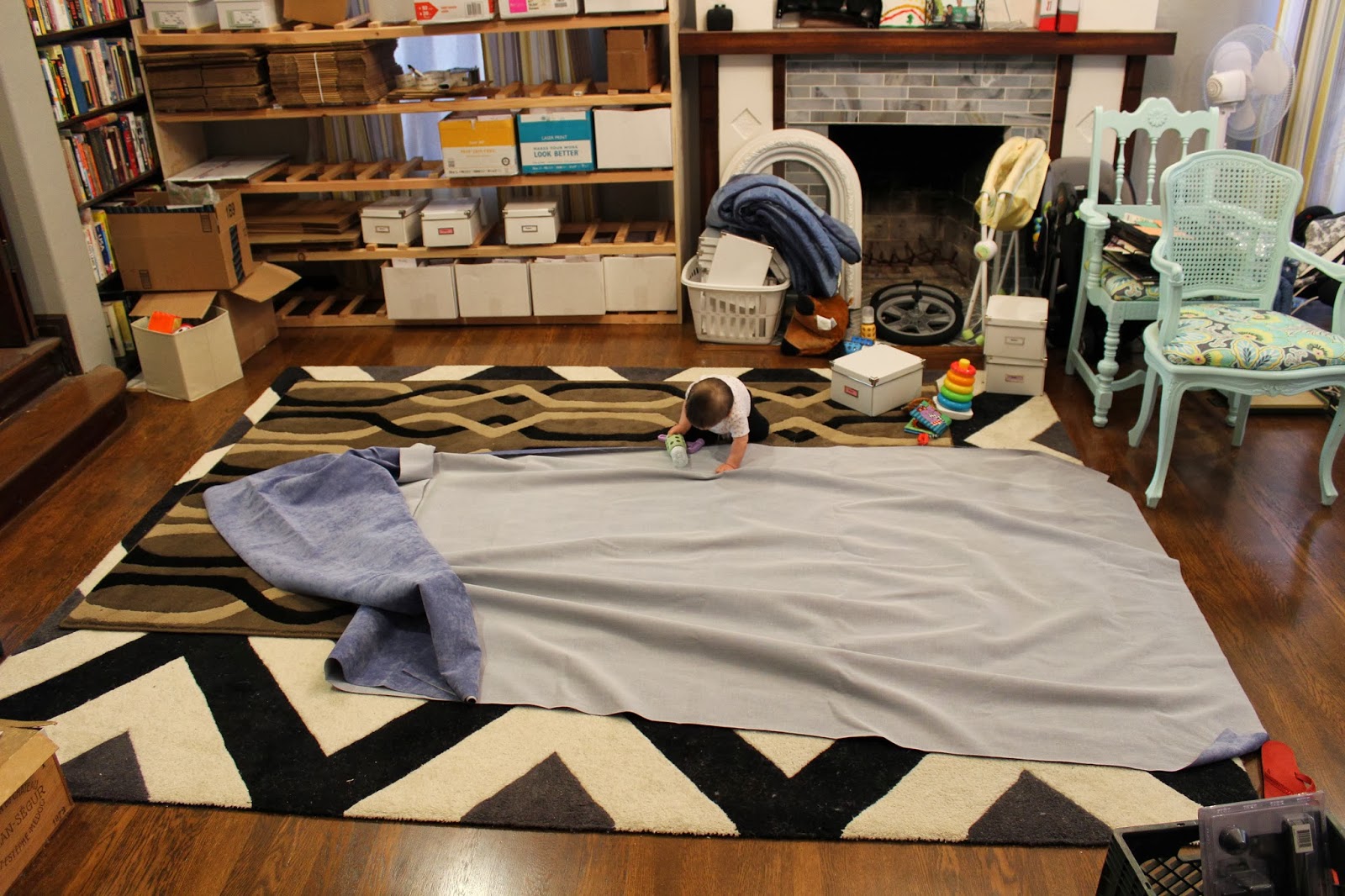 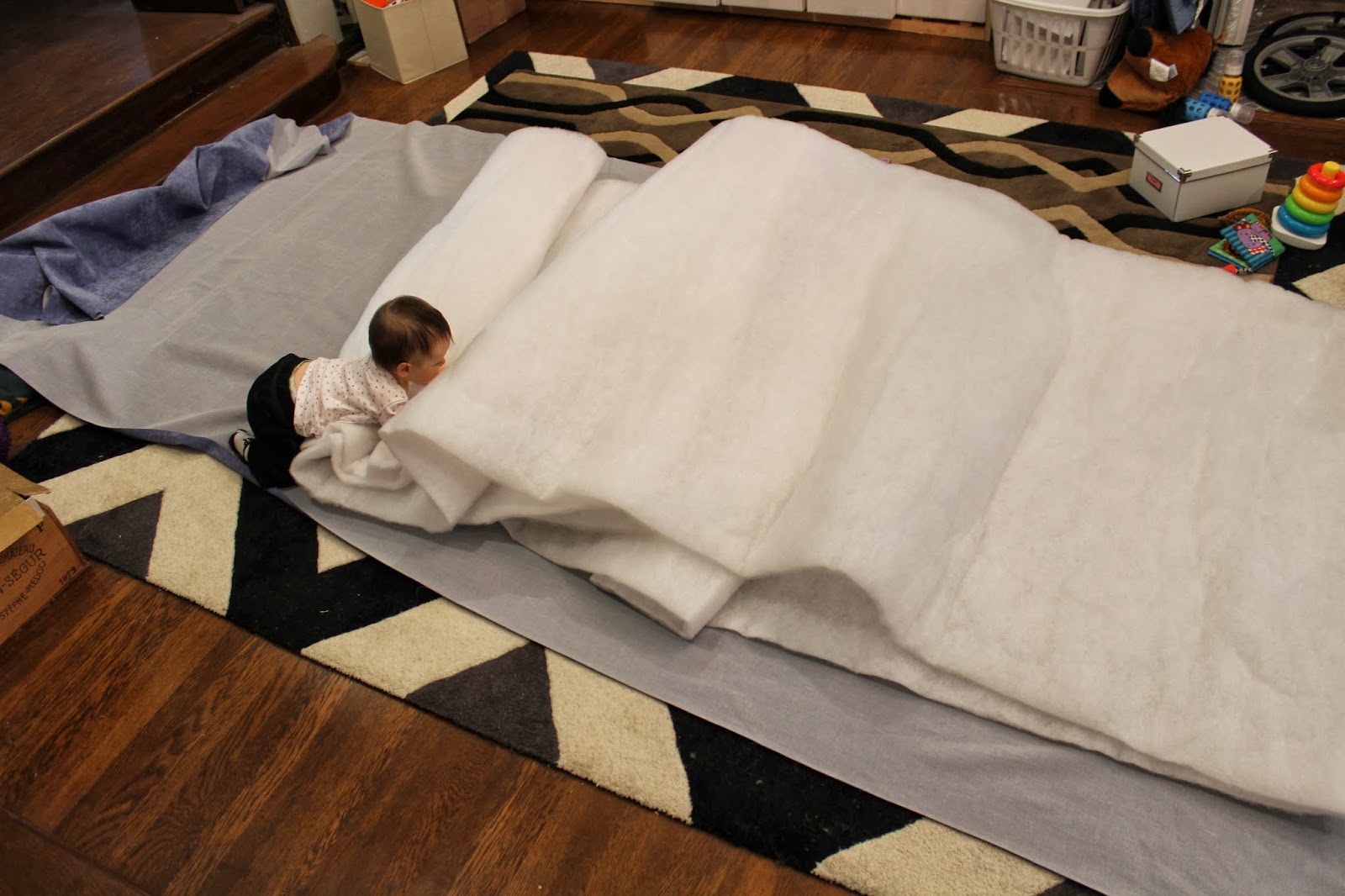 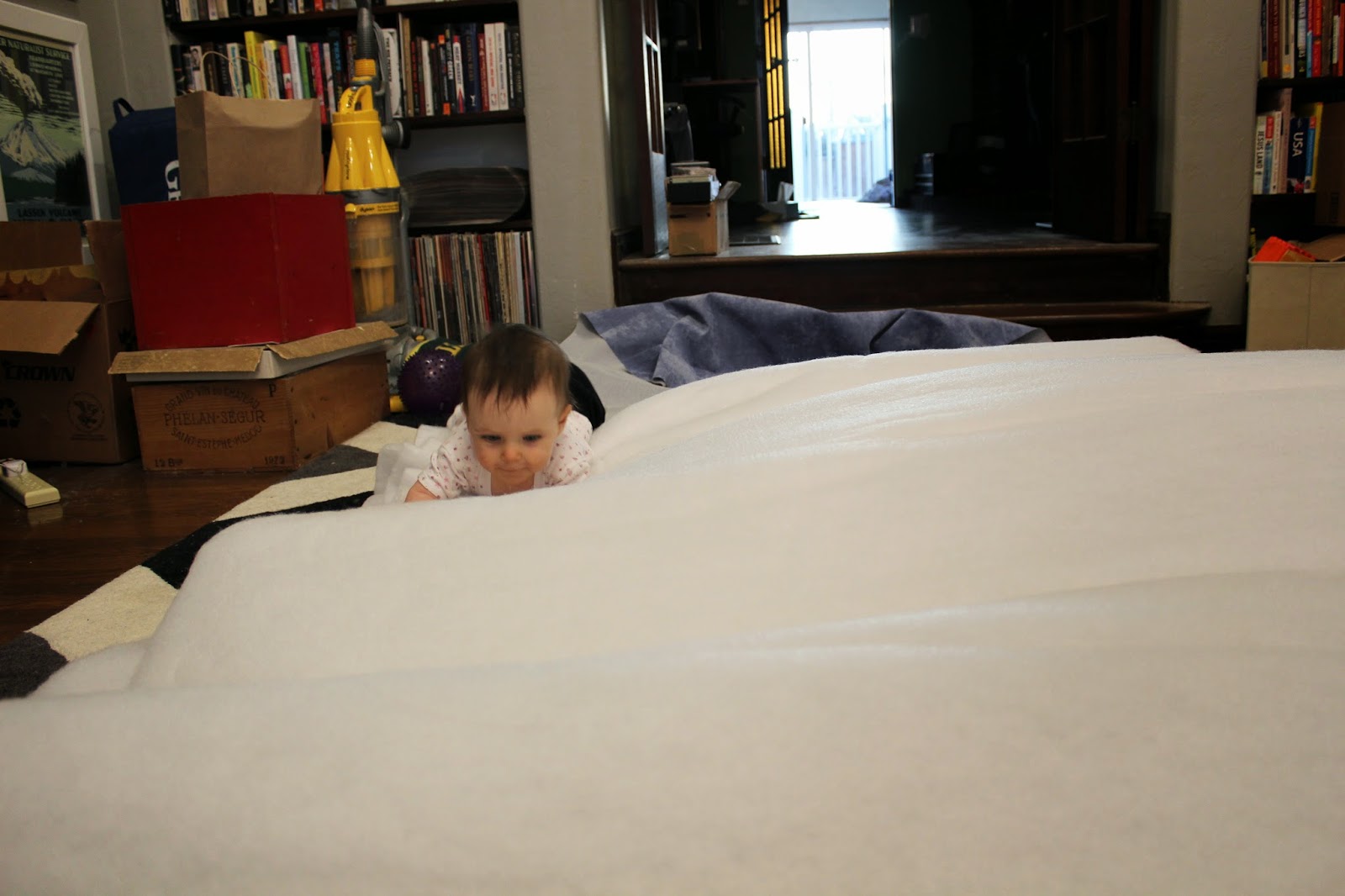 After the 30 minutes allotted for a solid adhesion, Chris and I brought the plywood in 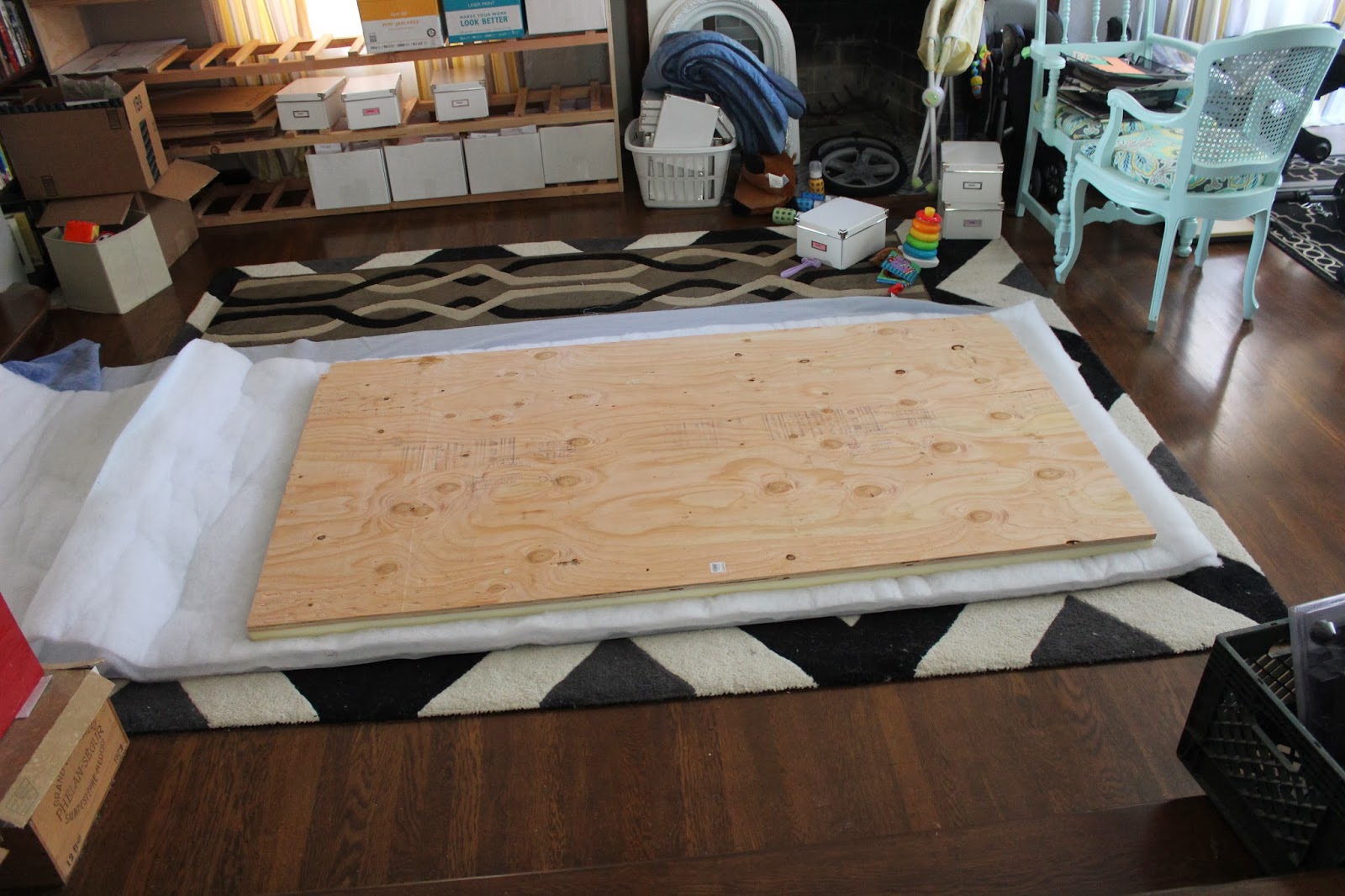 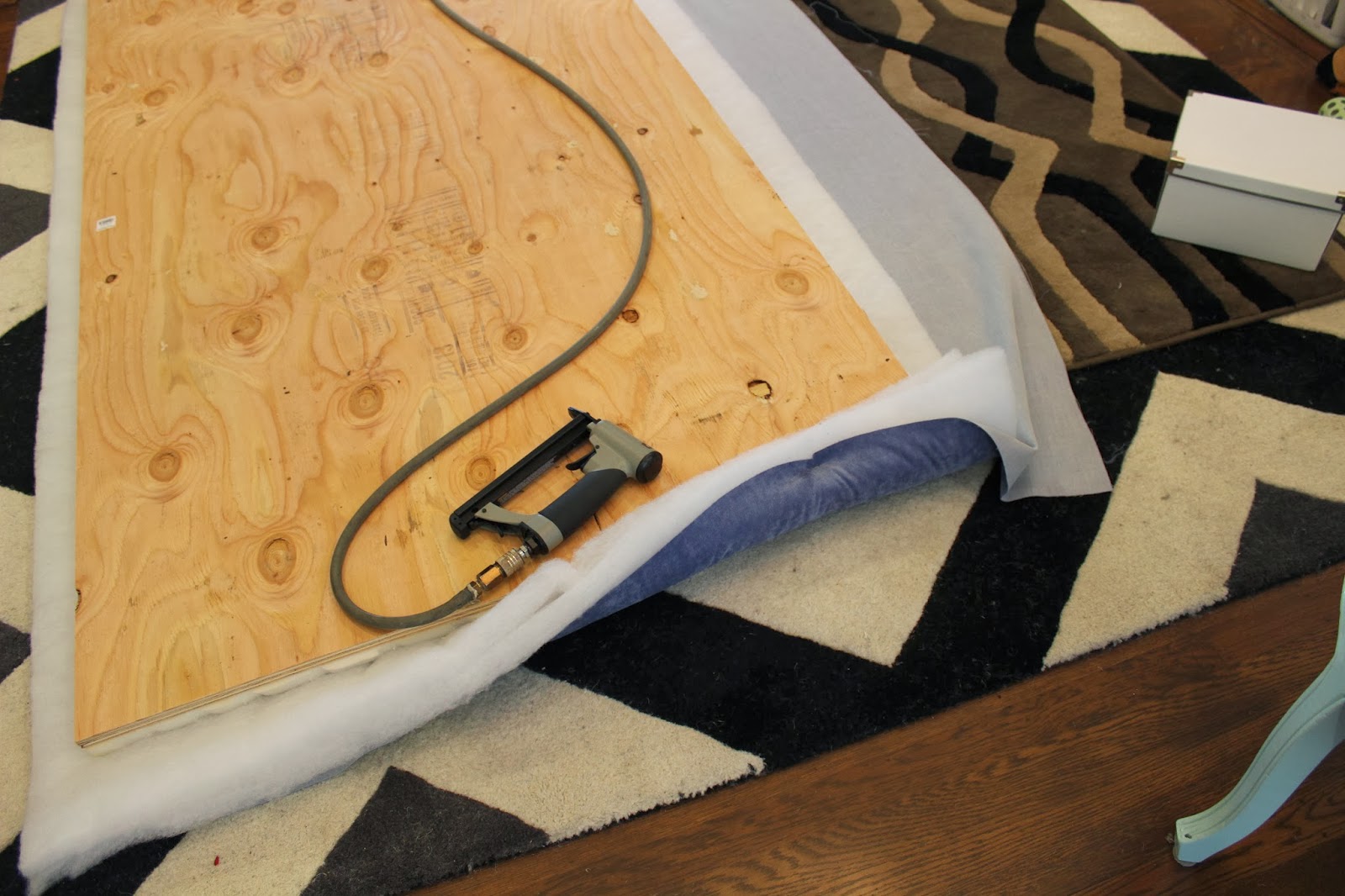 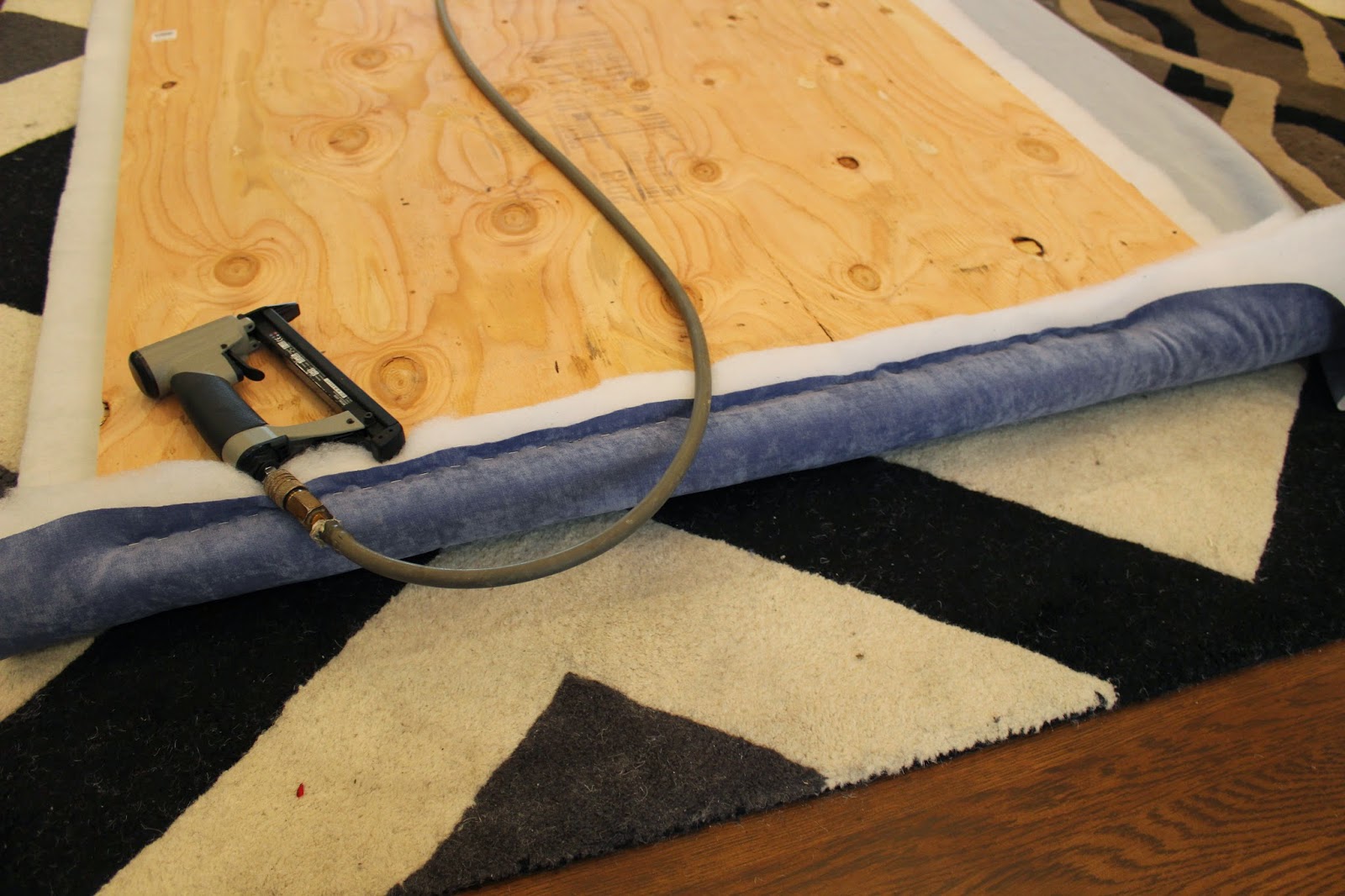 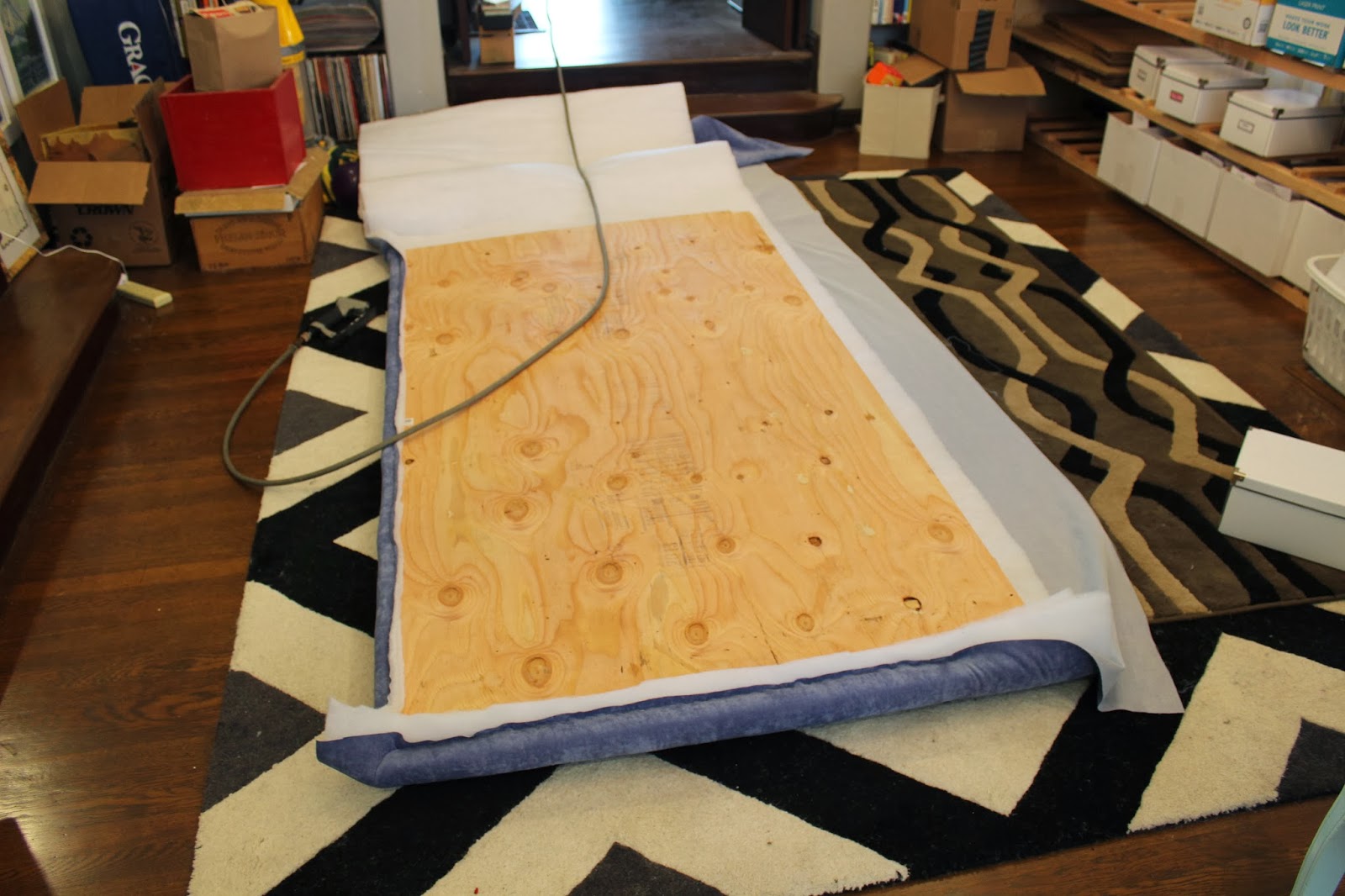 Zoe was very interested in the whole process and sat herself up on the edge of the two steps that go down into the front room from the TV room and watched very intently (she’s actually really good about scooting over to the edge and then stopping and not toppling down the stairs). Once I was done with all the stapling (their is no safety on the upholstery stapler so I didn’t want her near it), I brought her down so she could investigate 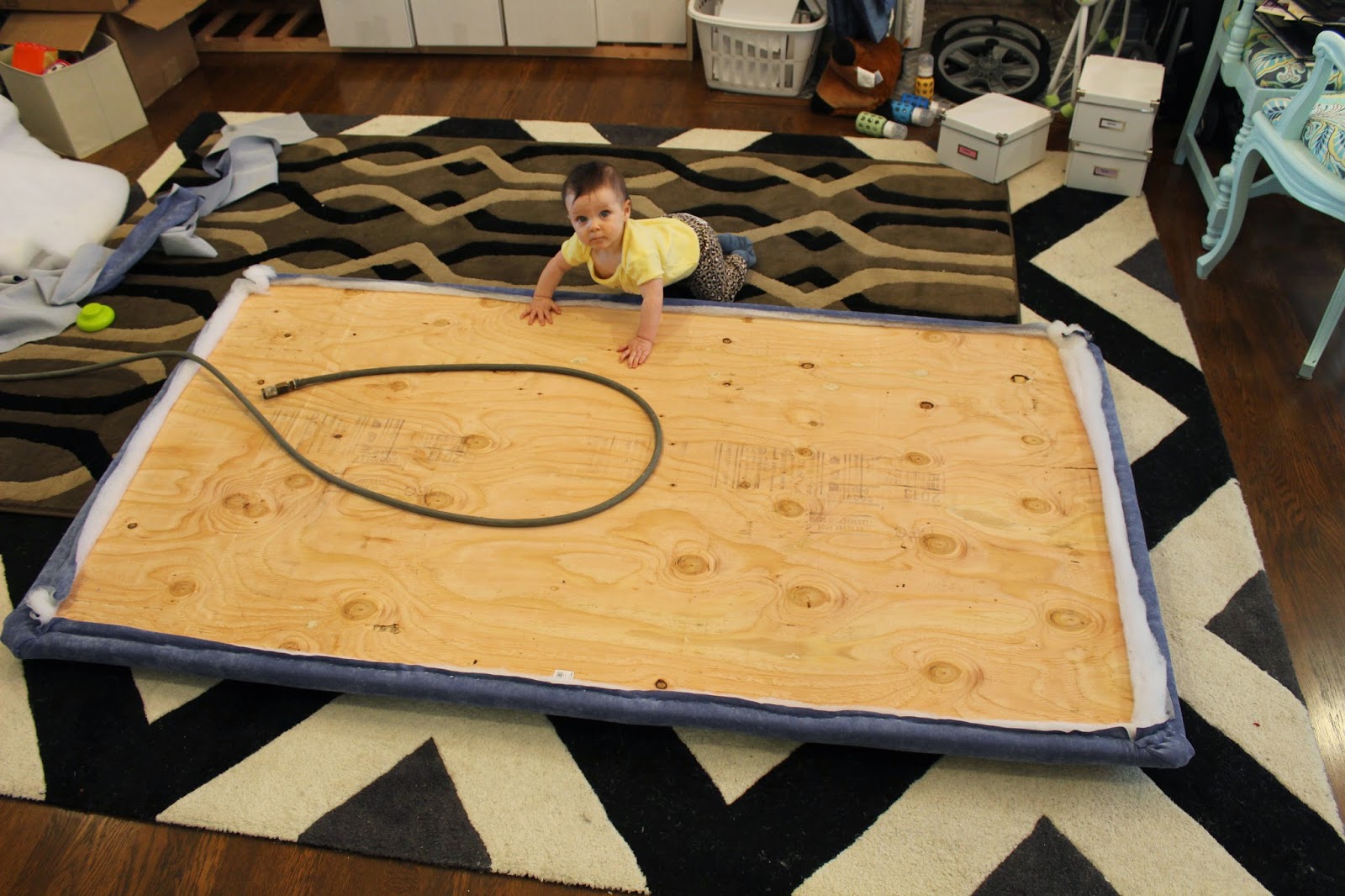 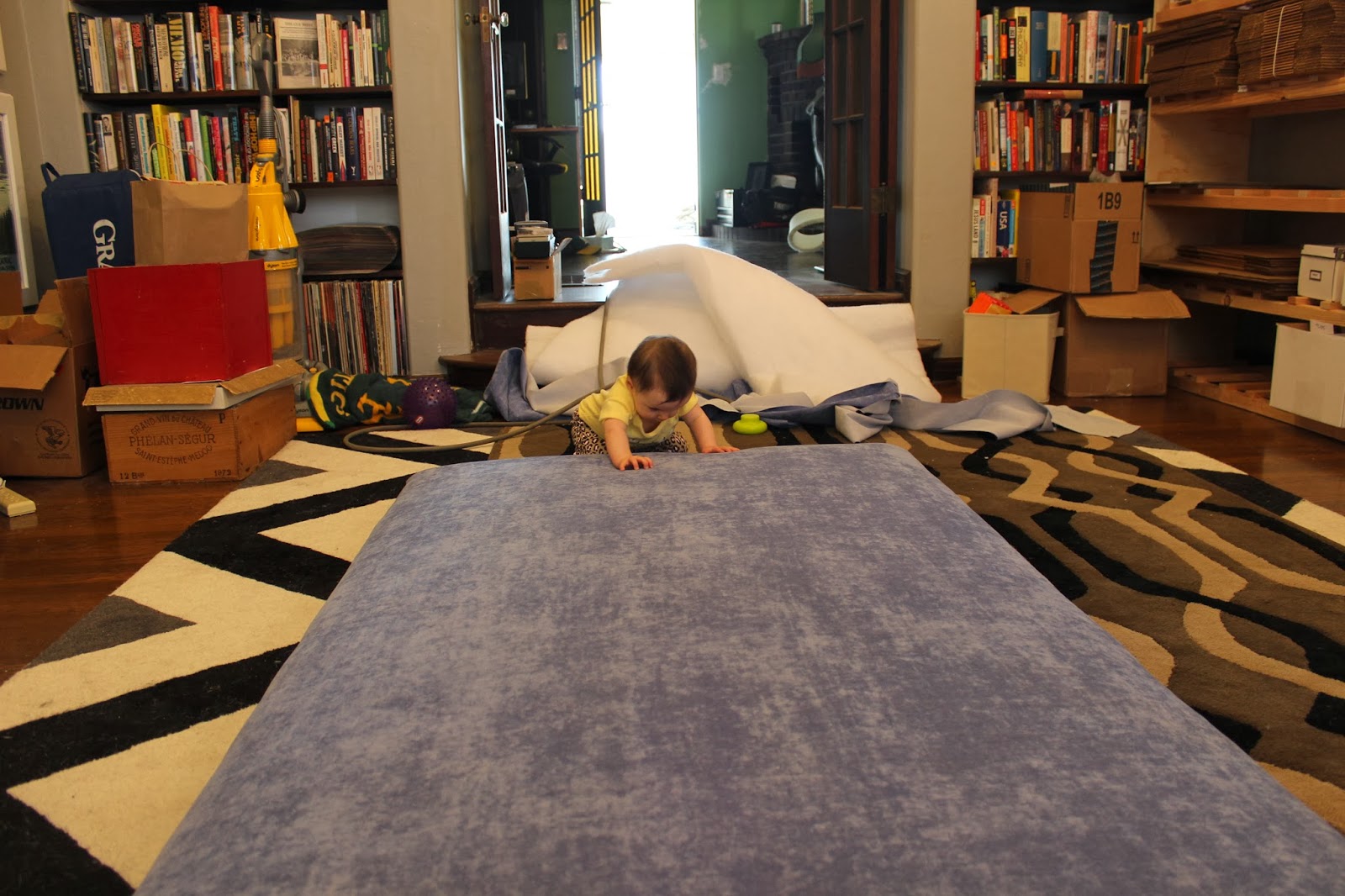 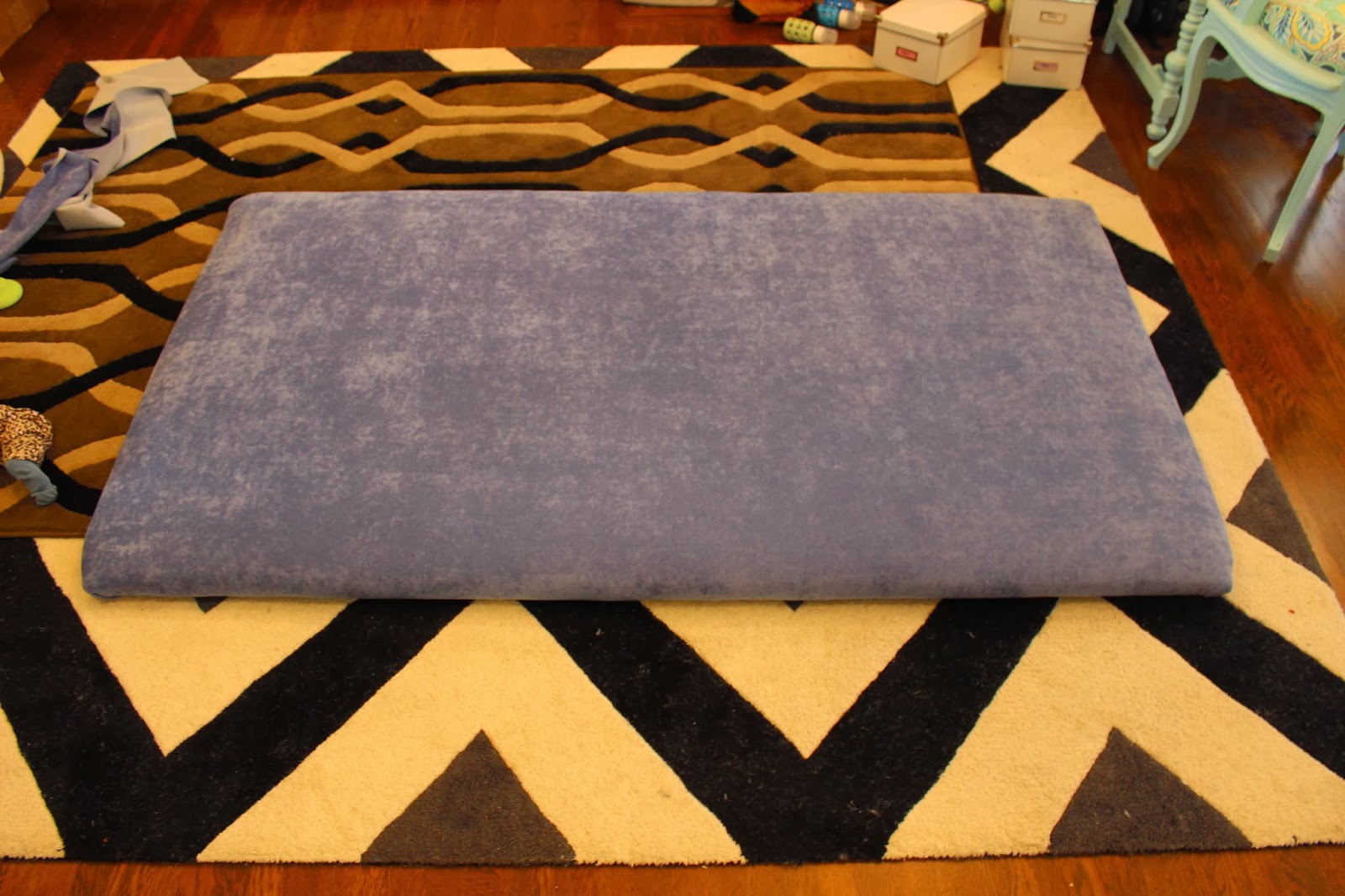 We still need to attach and upholster the 2×4 “wings” and then attach the upholstery nails (which are two parts that I’m slightly nervous about), but a large portion is finished and I’m motivated to get the rest done because this is looking so snazzy. I really like the fabric we went with – it’s solid, but because of the texture it really has a lot of great variation in it. Plus, it’s really soft so it feels super yummy.