It’s hard to believe that this space looked a lot more barren just two weeks ago. I’m glad we finally made this space a priority because it’s been really exciting putting things together. Chris has been incredibly thoughtful about which things go where (including what isn’t used as often and therefore goes downstairs in the basement). And then almost every other day we spend anywhere from 10-30 minutes talking about how things are progressing, where things should be shifted, how we can maximize the space, etc. So how ARE things progressing? 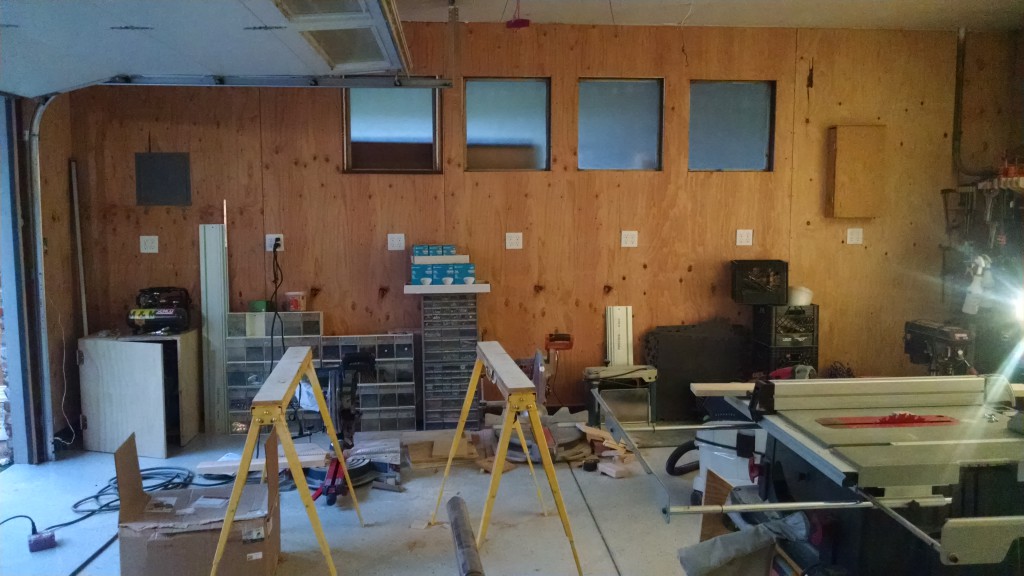 One easy item is that Chris has frosted the windows 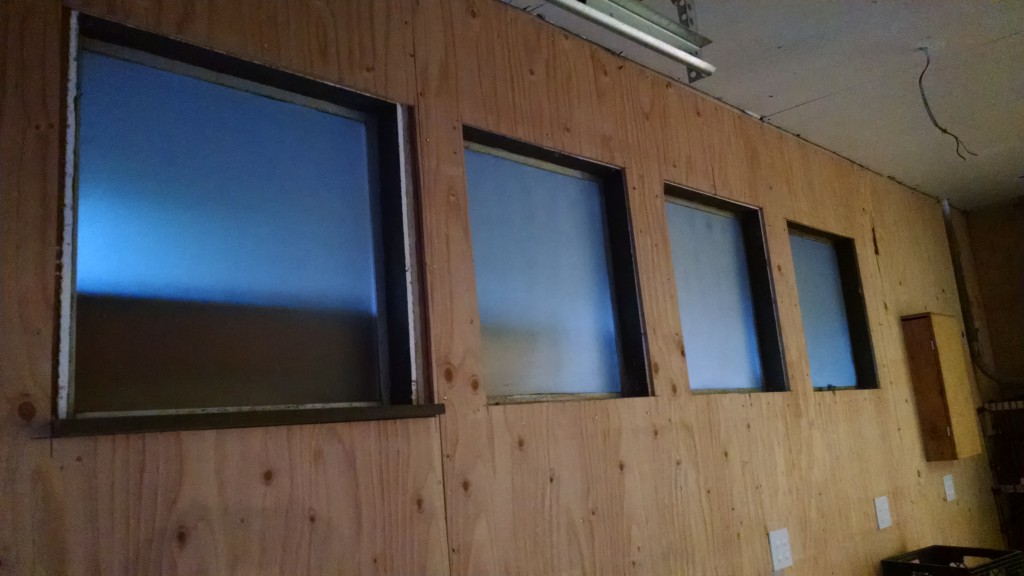 They probably need about one more coat to make things even, but it’s nice to get the light in while also providing some privacy so you can’t look in at a plethora of tools.

He’s also built a little house for our air compressor 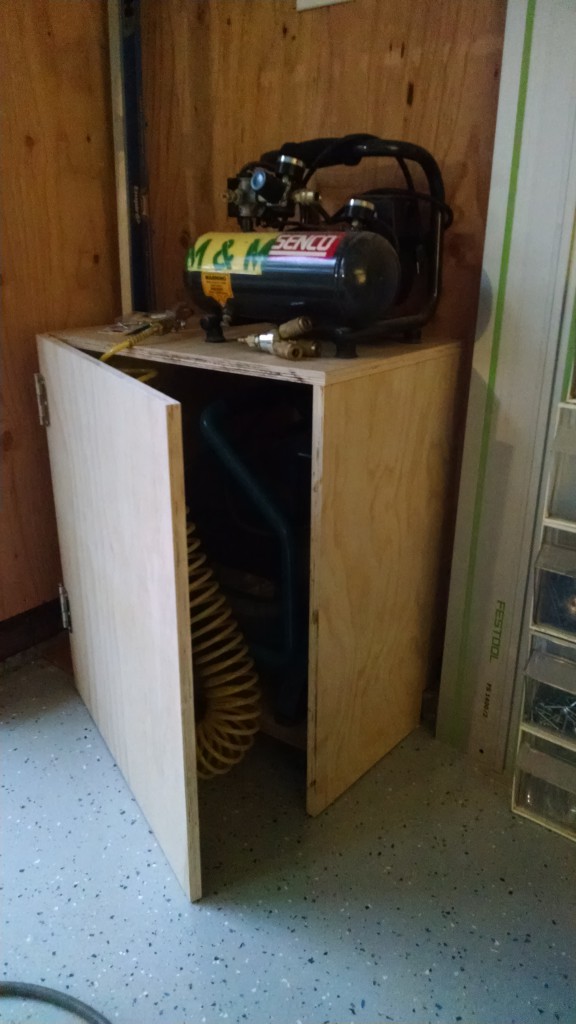 That mother fucker gets loud, and eventually we’ll insulate it to keep the noise down. 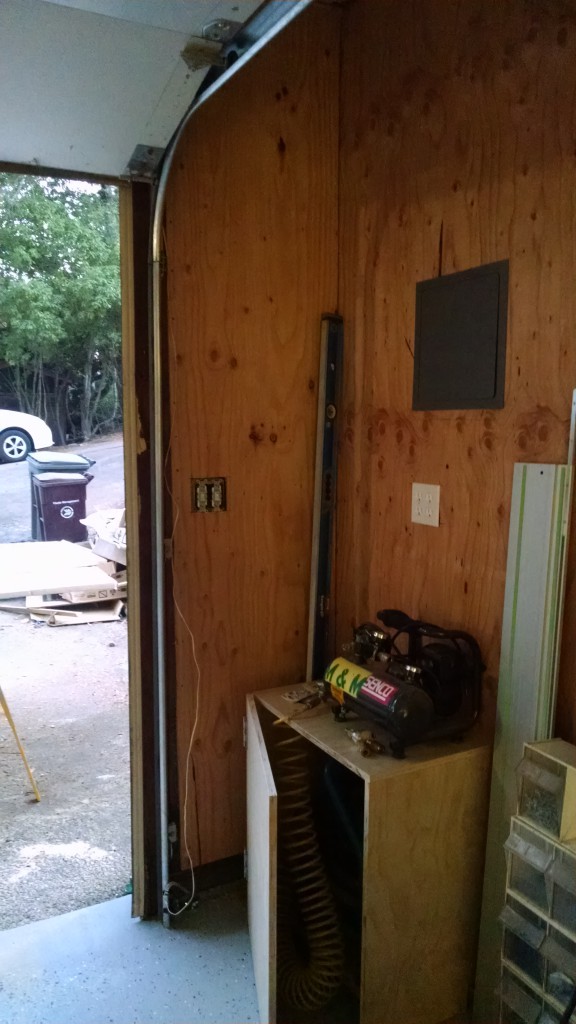 Most of the remaining ones are on Chris’s truck. 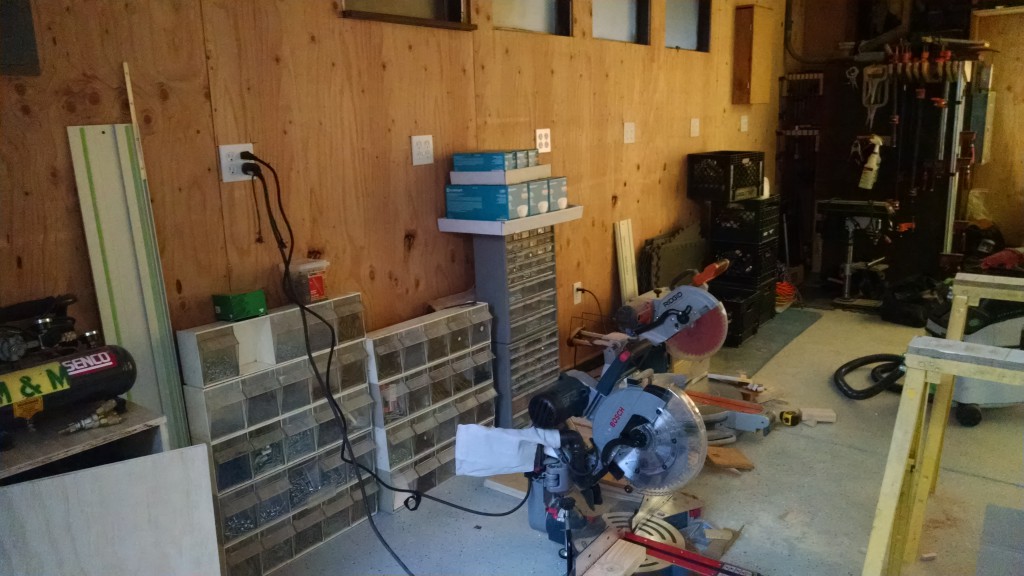 The Rigid was our first miter saw and Chris has decided upgrade to the Bosch. Hopefully we’ll be able to sell it for a decent amount to offset some of the cost. The miter saw will have a pretty decent feed extension out on both sides. In addition the planer will be stored along this wall, as well as the screws and other similar hardware. 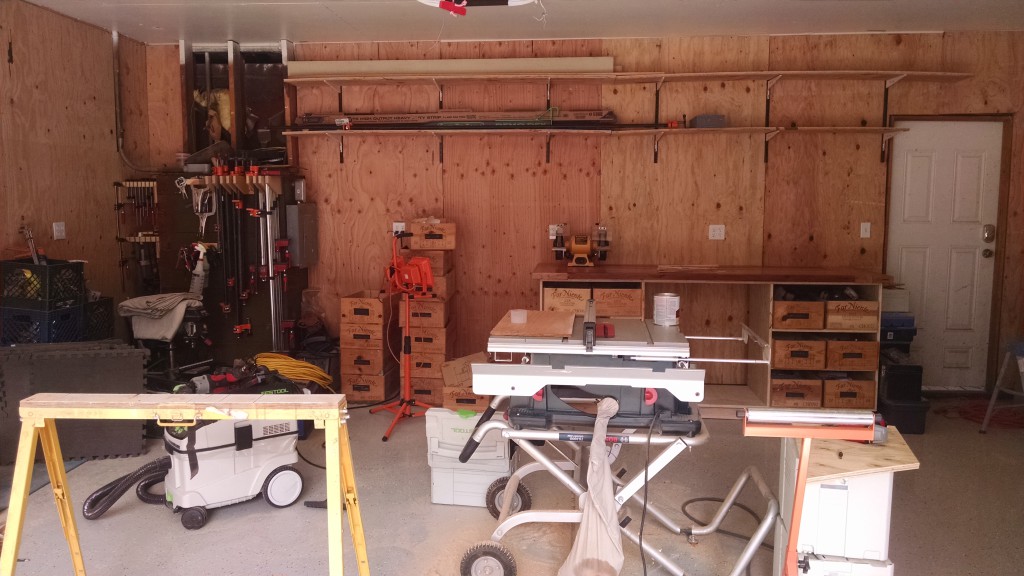 Ladies and gentleman, we have a work table! 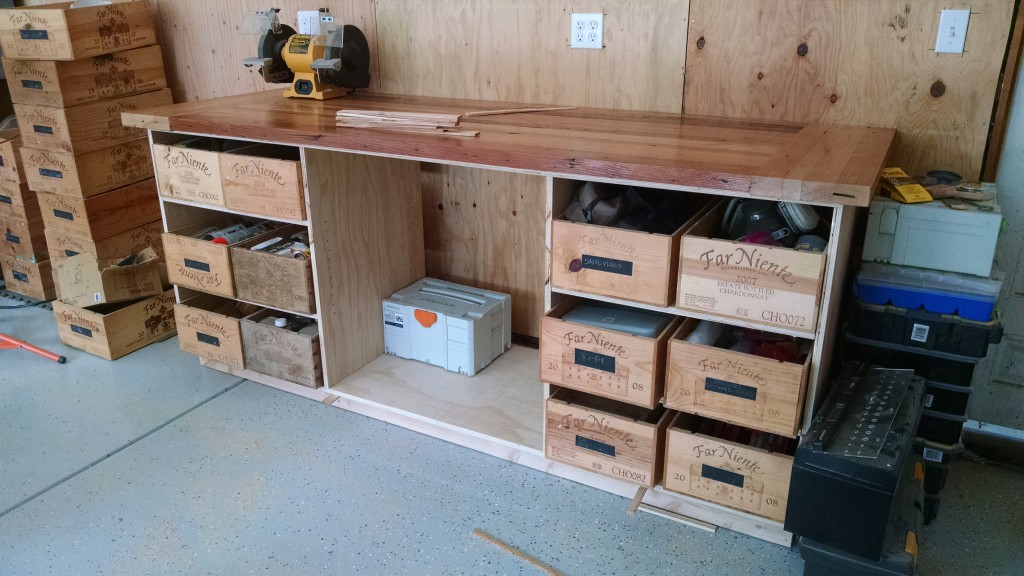 Pretty awesome, right??? We used the wood we had intended on using for our sports ticket table (because we bought a vintage solid wood table EXTREMELY similar to the one we had designed). We had already joined a lot of portions of it YEARS ago, so Chris didn’t have to do much 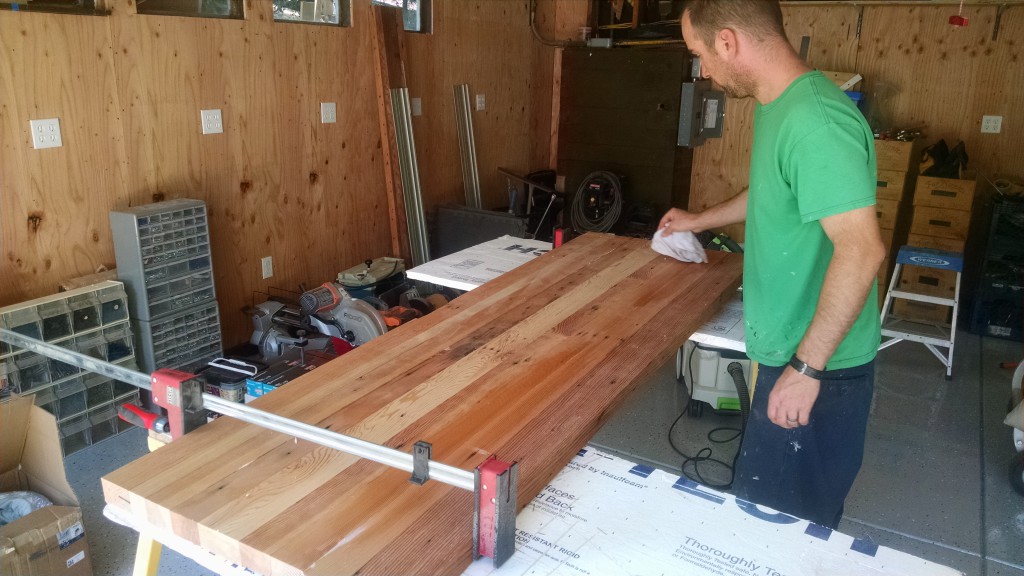 But he did add a bit on the outsides to make it a little bit longer than we had intended for our dining room table (its original use). He made it longer so that it would fit two sets of double wine boxes and a section of Festool cases in the middle 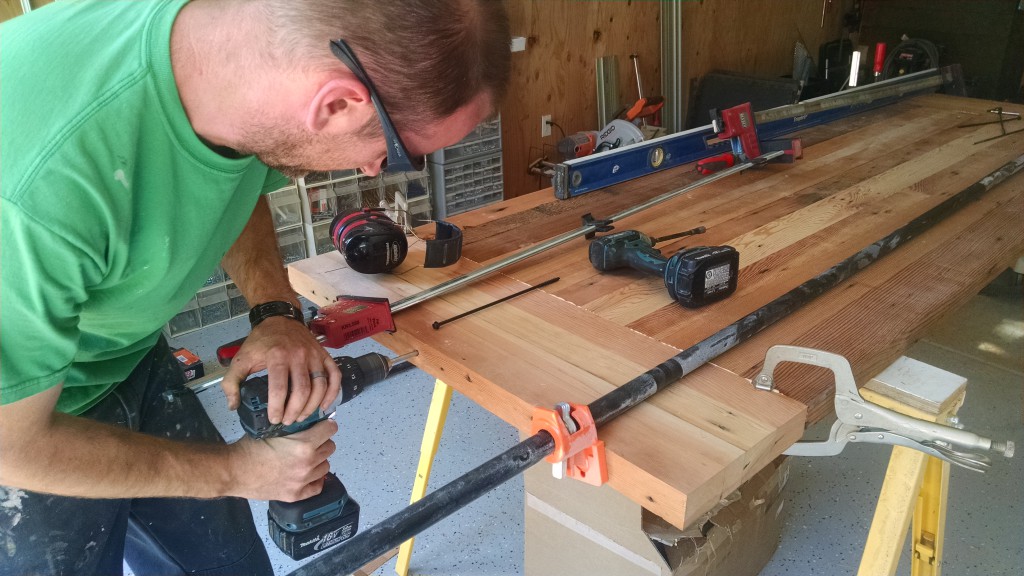 Once it was all built (using our reclaimed lumber we’d previously bought for about $70 and two sheets of plywood), Chris put the wine boxes inside and he got some drawer slides for the Festool shelves 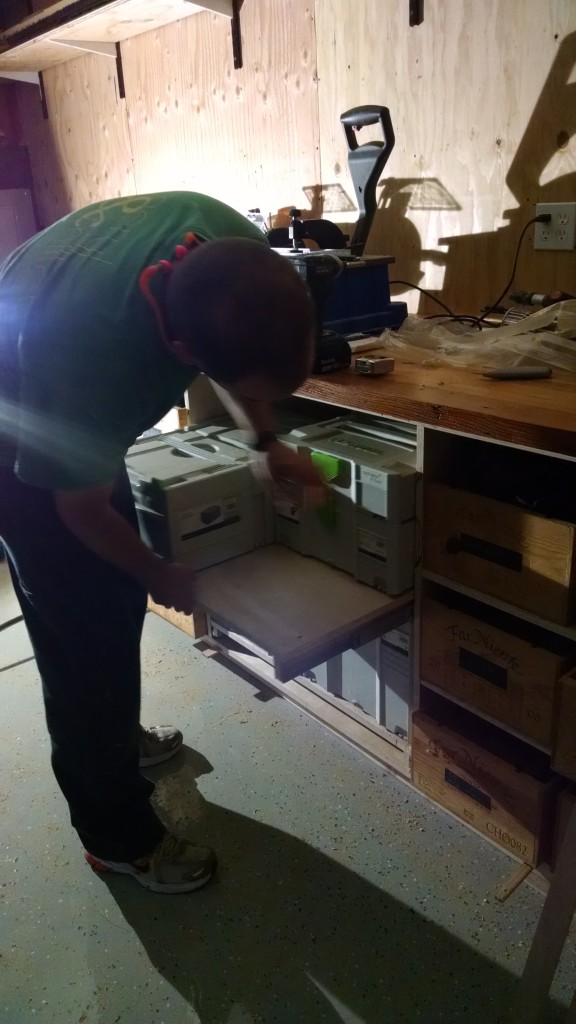 To the left of the already built work table will be another work table with the Kreg foreman inset between the two. We’re not entirely sure what will be above each work table yet, but likely the router bits and a small peg board. It’ll probably shift around though.

Lastly on this wall is the clamp storage 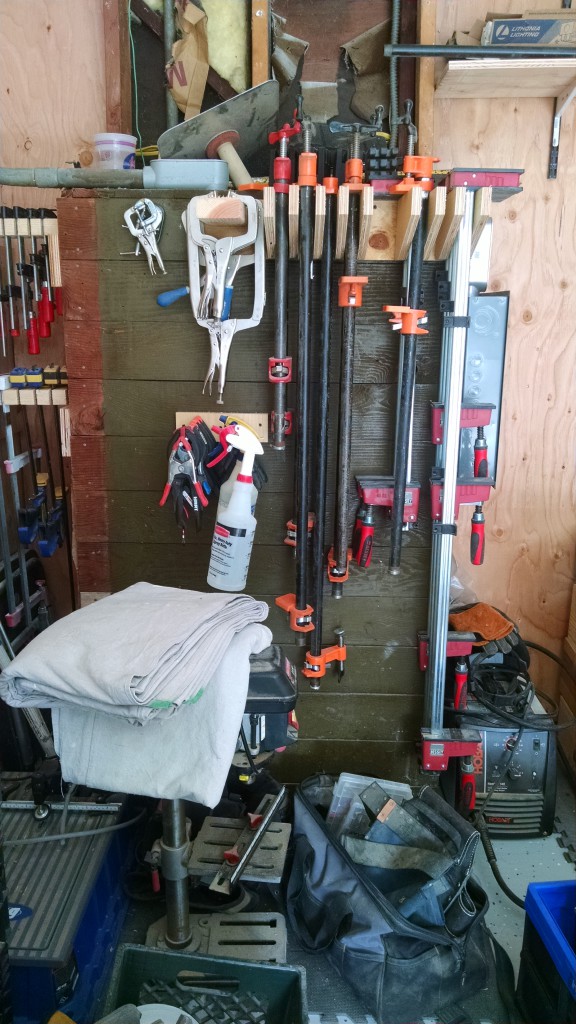 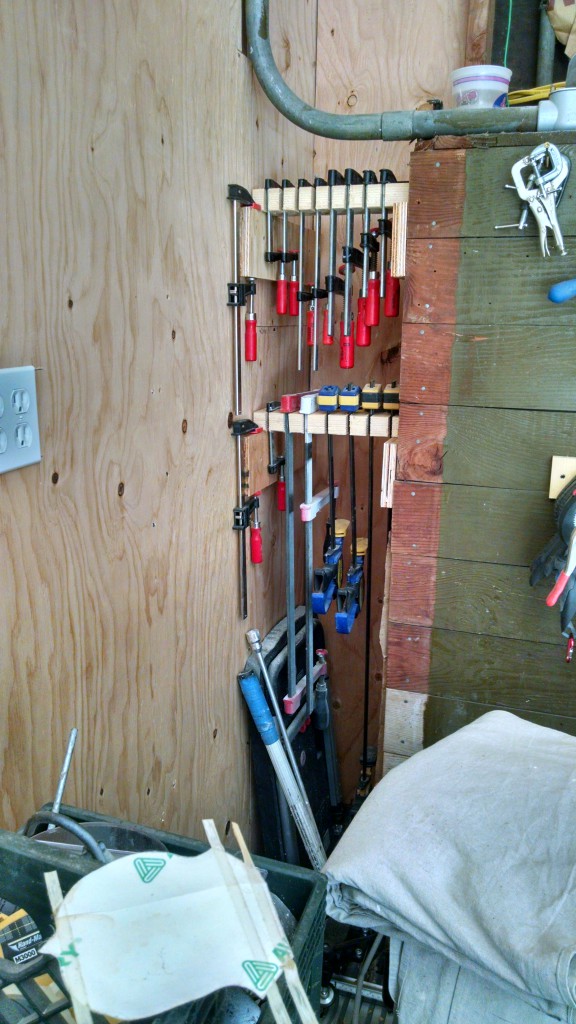 The heavens sing from above 🙂 This is a weird area, especially the alcove between the doghouse and the wall. We made very good use of that space.

And lastly, the east wall 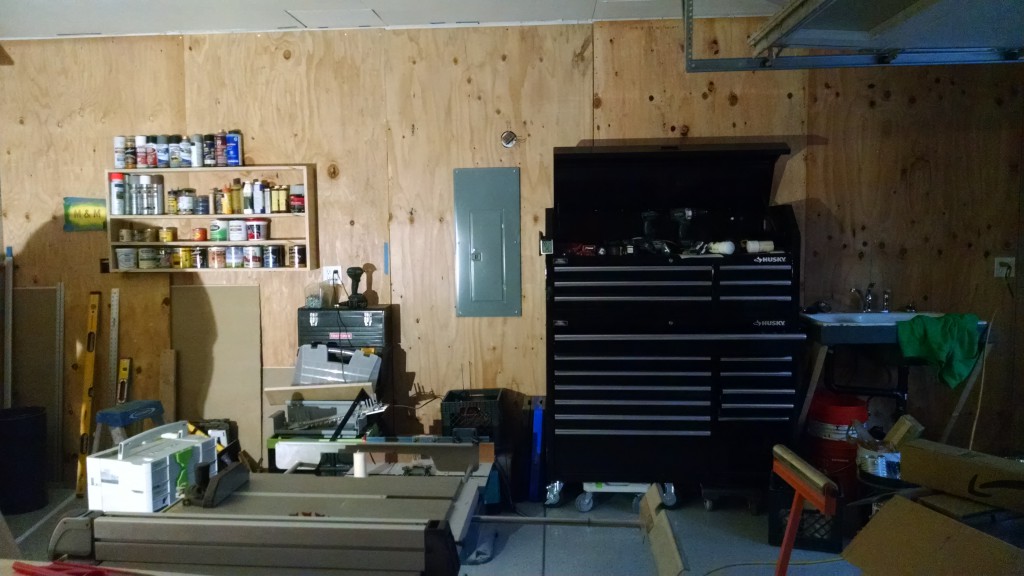 That tool chest, bah! It’s pretty awesome. Is it possible for a tool chest to be sexy? Because I definitely think it is. And it’s funny, I used to think our old one was big and tough, but after wheeling this one in there, it looked pretty puny. And this mofo can fit A LOT of shit 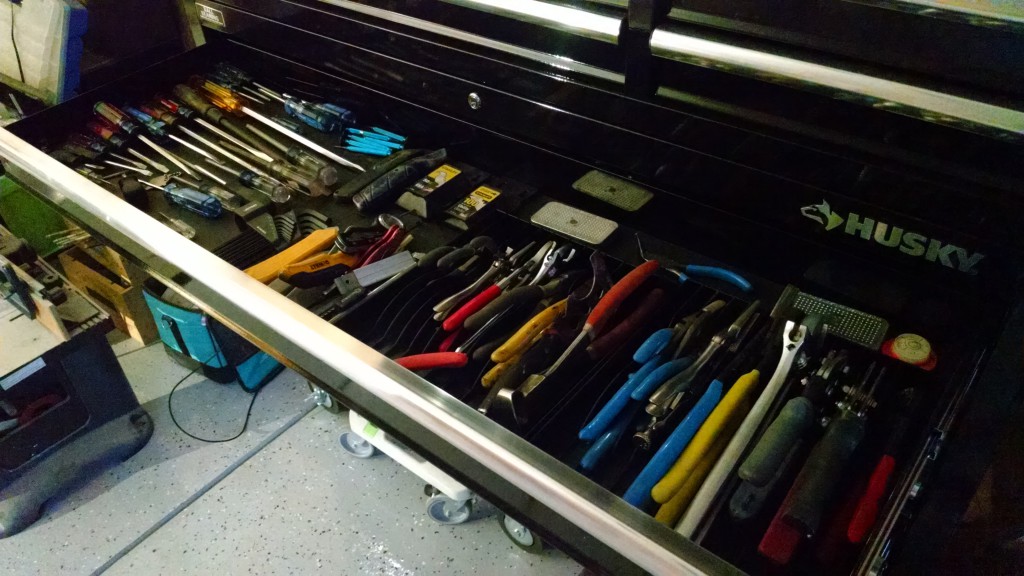 And the top is our charging station – we have outlets here behind it on the wall and the tool chest has holes along the back to accommodate power cords.

Our sheet goods are stored to the left of it on the ground. It was an area that wasn’t super usable because of where the door was on the north wall, so it’s a really good use of space. Above the sheet goods is a really simple cabinet for spray paint, poly, stain, etc. 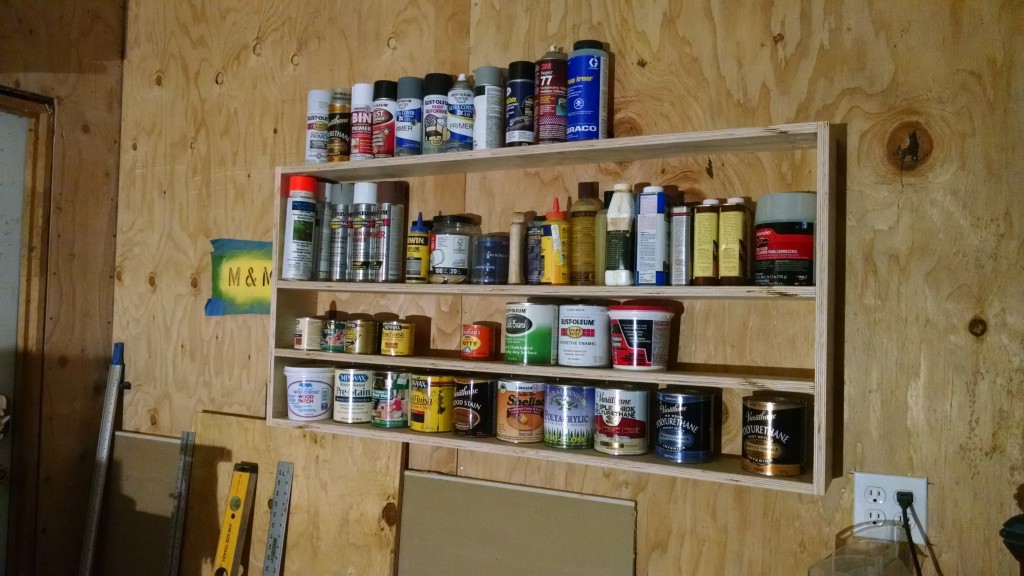 To the right of the tool chest is the sink as well as some open area to the immediate right of that. 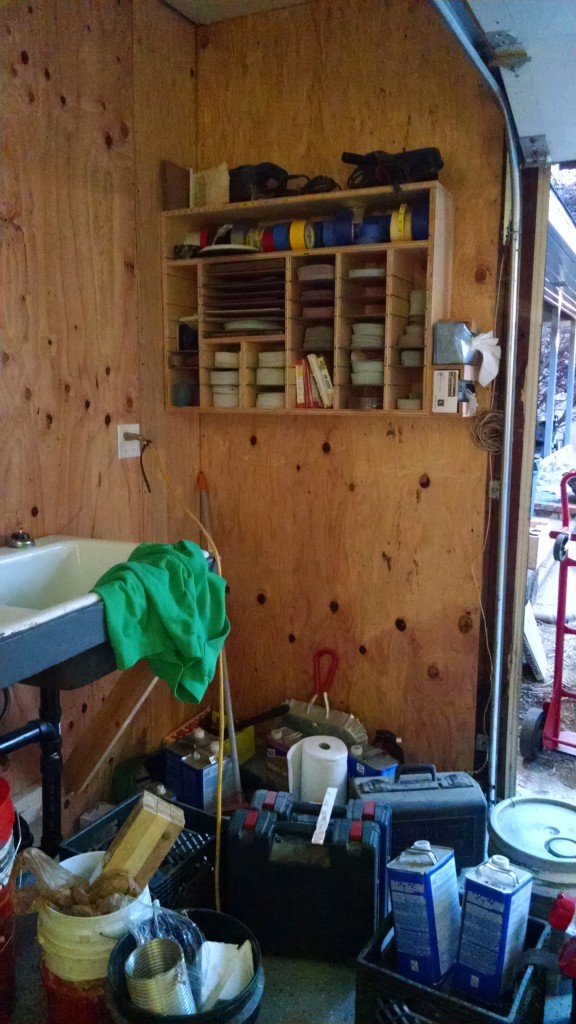 We’ll build another cabinet for wine boxes that will store cleaning supplies, safety equipment, etc. Against the wall next to it is the sandpaper and tape storage 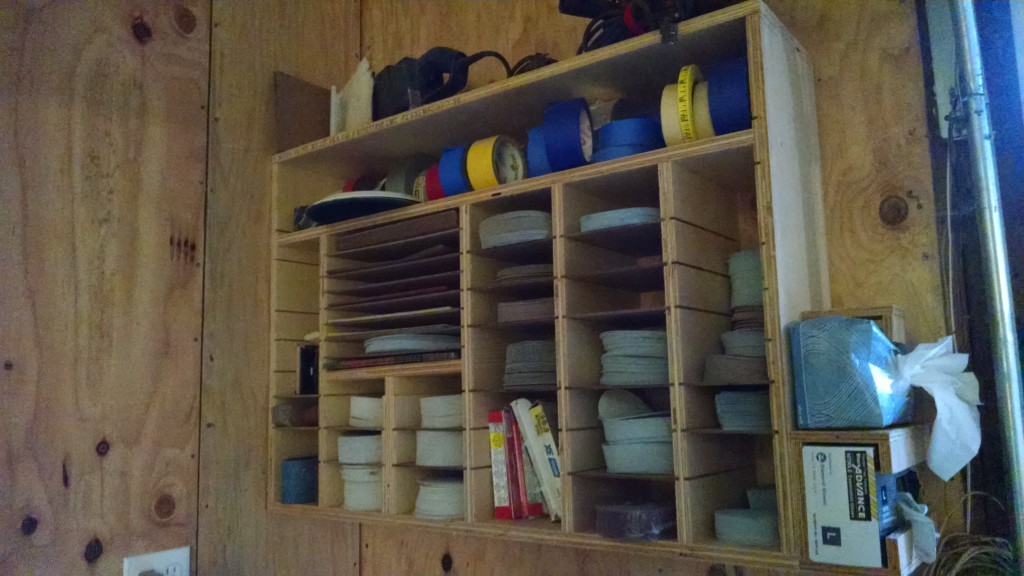 Pretty awesome. Such a better way have all the various grits of sandpaper for a couple different machines stored instead of boxes stacked on top other or a mish mash drawer (which is what we had before). And you better believe we’re going to go CRAZY with some labels when this is all said and done.