***Update: read about how Home Depot made it up to us HERE.

Bad news. We had to return our planer. I know. Total suck fest. A little while ago I was taking a break being sick again and Chris was out in the garage working on building the table and planing all the wood to the same thickness. The first couple boards went in like a glove, but afterwards…well…there was a lot of door slamming and heaving off of safety glasses as Chris came inside time after time to look online at reviews and any articles he could find where people were having the same problem as him and if there was any way to fix it.

Normally we love DeWalt tools. Their tile saw is totally awesome and we’ve never had any problems at all, but upon delving into reviews a bit more for this DeWalt planer we got, Chris saw that many people were having a similar problem that he was: the knives very quickly became dull (as in after less than 10 boards) and so the machine basically stopped self feeding and became EXTREMELY difficult to even try to shove a board through. Let’s just say the noises the machine were making were not pretty.

We were left with a tough decision, but based on the incredible difficulty we were already having combined with the evidence of similar problems so many other people had, we resolved that we needed to return it.

We were a little nervous because we no longer had the box, but who saves boxes for 6 weeks after you’ve bought something and assumed that fresh out of the packaging it would work properly, especially after it did work when we ran a couple test boards through it? We did have the machine, the receipt, and the manual. So I called Home Depot and attempted to explain the problem but the guy kept cutting me off and said, “Just bring it in, we’ll return it.” Alright, I guess they’ll let us return it.

Not so fast. We got to Home Depot and had to wait forever (but isn’t that what always happens?) for someone from hardware to come help us. He came over and stared wide eyed at the machine and asked what we were trying to do. We said return it, the machine didn’t work. It planed about 6 boards and then after that it basically stopped working. He went to go talk to his manager and we waited and waited and waited.

He finally returned. He said that because it was purchased over 30 days ago and that’s their return policy that they couldn’t return it. Wait, what? 30 days? I’m pretty sure Home Depot’s return policy is 90 days, EVEN FOR USED ITEMS. I asked politely why that was the case because it says 90 days on our receipt 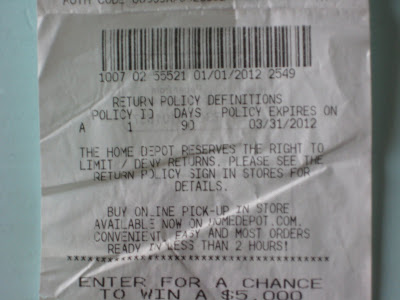 He got really defensive (and turned into kind of a dick) and said he was just telling me what the manager said. Chris and I said (politely again) that we understood that, but how come it says 90 days on our receipt but you’re now saying it’s 30 days? Again, Defensive Dick was dickish and so we asked to talk to a manager.

That took FOREVER again. And when she finally came out she went straight to the return counter to LOOK AT THE RETURN POLICY. Yes, that’s right: the manager didn’t know the return policy and so she had to come out to look at it. And let me show you what it says 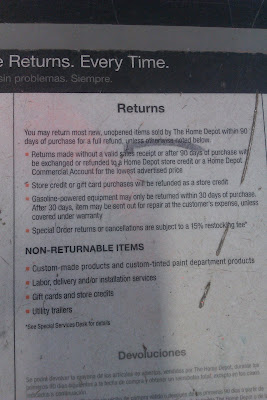 But do you want to know what this idiot told us after she read the return policy she didn’t know even though she’s the manager of the store? That it was after our return period because power tools have a 30 day return policy. We said, “your return policy says ‘gasoline-powered tools’ —” to which The Idiot interrupted and said, “no, gas and power tools.” Really Idiot? I think I can read punctuation, and this hyphen…

…does not mean “Gas and power” IT MEANS “GAS-POWERED!”

And, the other thing, it is also covered under DeWalt’s own warranty in their manual. Idiot. 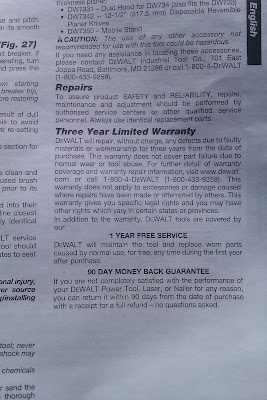 I was so pissed off. Chris gave me the stink eye so I kept my mouth shut and let him calmly tell The Idiot that she was indeed an idiot and that we bought a product that doesn’t work, your return policy indicates that we can return it, the person we spoke to on the phone said we can return it, and the warranty in the manual says we can return it.

Finally, after over an hour and a trip back to the house to get the manual (because they insisted they couldn’t take it back without it) The Idiot and Defensive Dick finally accepted the tool for a return that their return policy and DeWalt’s manual told us we were allowed to return. Fuckers.

And once all the frustration subsided we were finally able to mourn the loss of the planer. Sigh. We really wanted it to work (especially at a great price and with gift cards that we had from Home Depot that helped pay for it), but sadly it didn’t. We’ve got nothing against DeWalt, and as I said before, we normally love their tools, but unfortunately this one didn’t work for us.

We resolved that if we wanted to get another planer we would have to get one from another brand. But those suckers come in at a hefty price tag. But we really really really wanted one and that table really needs one (reclaimed lumber would be just a tad difficult without it). And now that we’re getting better at building we’ve got lots of plans for stuff to build: a hallway cabinet, multiple laundry room cabinets, a room wide cabinet/hutch thing in the TV room, a bed, possibly a banquet in the nook… So Chris shopped around online and settled on a Makita one 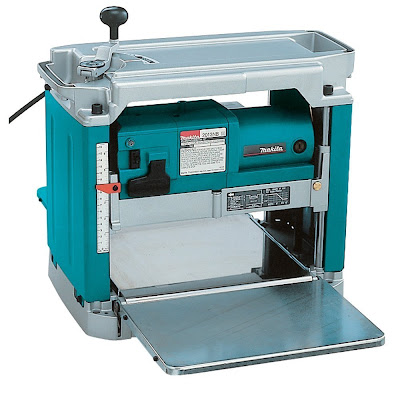 It came in steep: $550. Yikes. But whenever we work on other projects for other people we put the money aside into a joint bank account to save for a rainy day or a possible vacation, and we decided this was that rainy day. It helped that out of 116 total reviews 108 of them were 4 and 5 stars (and 84 were 5). Plus, a very helpful reviewer had came back multiple times after using the planer for years to give updates on how it was holding up and he’d used it for thousands of board feet and it kept on kicking. So that’s how our bank accounts are now $550 lighter and why I’ll continue to always hate Home Depot. Lowe’s, could you please open a location close to us? (there are over 5 HD locations closer than the nearest Lowe’s) PRETTY PLEASE?

« The Floors are Officially DONE!
We Grouted. But We Messed Up. »