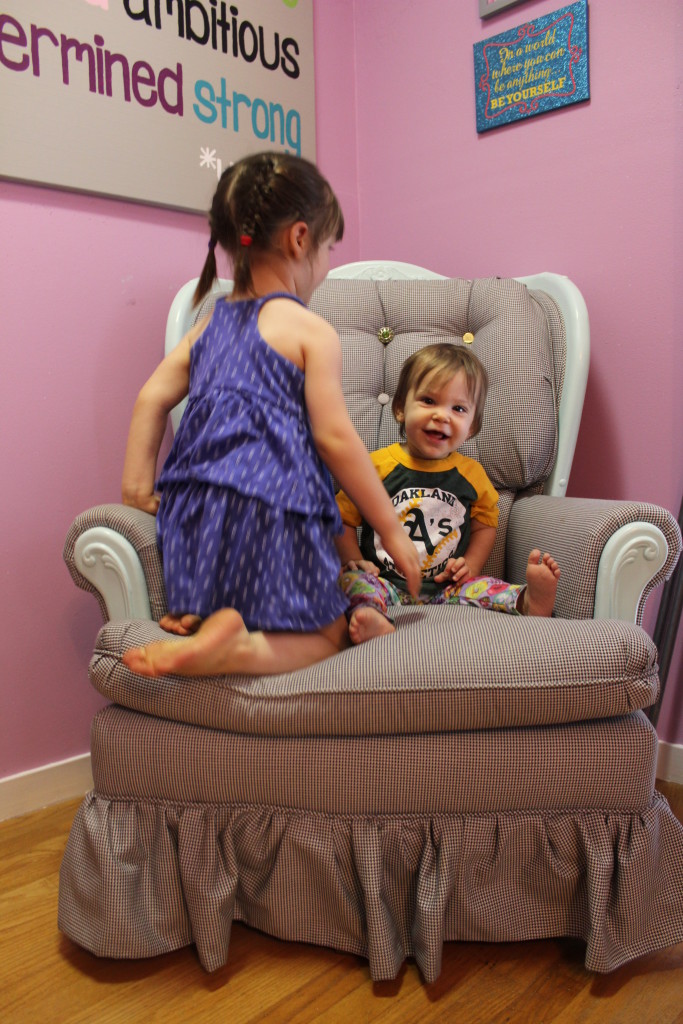 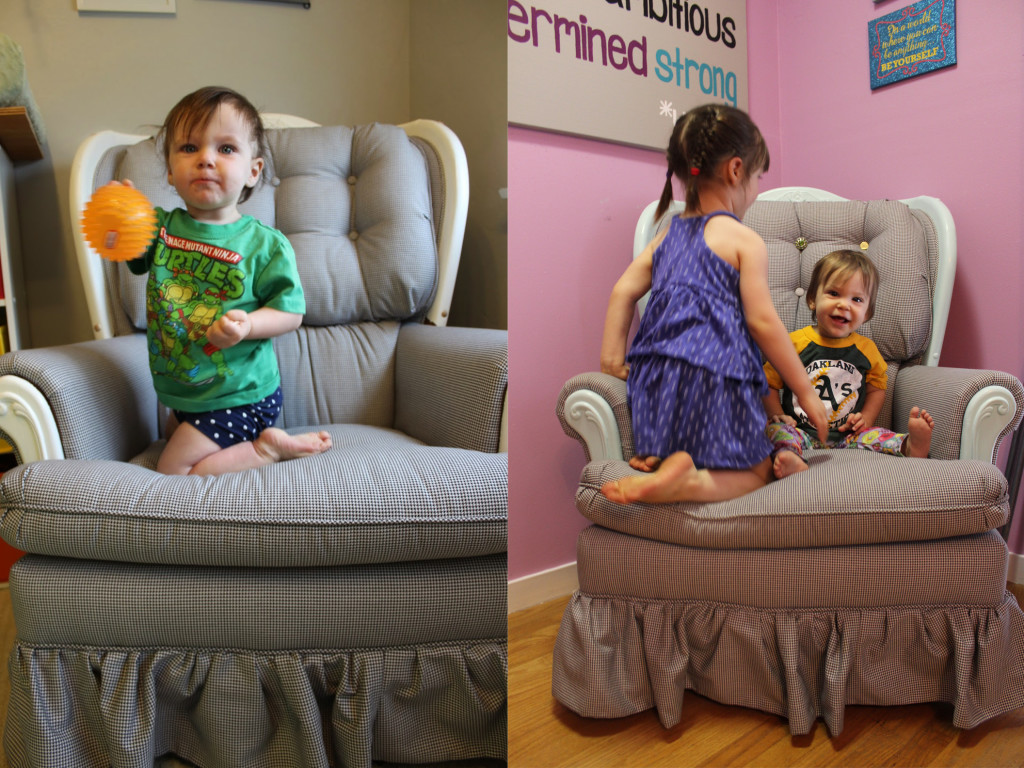 I can’t believe this past Wednesday this little lady hit 1. It’s pretty crazy to me. I think the first year with Merritt went by faster, just because we’re so busy, life has a lot going on and there’s so much more to keep up with.

If I could explain Merritt in one word, it would be JOYFUL. She’s just a happy little human. She’s content to hang around, she loves to just be around people and she’s really happy to hang out. I feel like she just makes people happy. She’s just a little bundle of positivity. She seems to really make people around her happy, and that makes me happy. She’s the best.

Still no walking yet. Or really any interest in walking either. She’s standing up a lot more on her own and is cruising around on things, but just doesn’t want to walk. If she’s standing up and you grab her fingers to try to get her to walk, she will sit right down. Or if you try to pull her up holding on to her hands to get her to walk she’ll tuck her legs under her. It’s humorous to me, she really doesn’t want you to “help” her at all. That girl is determined to do things on her own without anyone helping her. But she is a speedy crawler. Just like Zoe was. It’s funny, they’re both probably going to be on the later side with walking, but they ZOOM around with the crawling. Sometimes I have to run to keep up with her. And she thinks that is fabulous of course.

One string through everything is that Merritt really is independent. She doesn’t want you to help her stand or walk, she loves to take containers of food and feed herself out of them as opposed to you taking the food out for her, she likes to hold her pouches and feed herself, she likes to try to figure out how things work – she is very inquisitive and independent. I really love that about her. I love how much she wants to accomplish on her own. I really hope she never loses that quality. It’s awesome.

She’s starting to communicate more. I remember at this phase there was a lot of grunting and pointing with Zoe, and we have definitely hit that with Merritt. She has become really communicative and wants to talk with us about what’s going on and what she sees. The funniest is when you’re holding her on your hip and she wants to “talk” to you. She leans into your face, grunts, and then looks out and points to what she likes. Then she looks back and leans into your face and grunts more, as if to say, “Look! Do you see that!? Isn’t that great!?” It always makes me laugh. Sometimes it can be a challenge because we aren’t really sure what she’s grunting about or trying to communicate. She doesn’t get too frustrated or angry though, so that’s good.

Words she’s got as of a year are: momma, dada, balloon, ball, yummy, ow, and maybe a couple more. There are some words we think we might be hearing, but we’re not sure. Our kids seem to be on the slower side with walking, but on the faster side with communication. We used to sign a lot with her, but don’t as much anymore. I wish we did, but a lot of the time we forget and are just moving on from one thing to another. A good lesson to stop and smell the roses more

She still loves Zoe and Chris so much. Can you see how much she adores her? 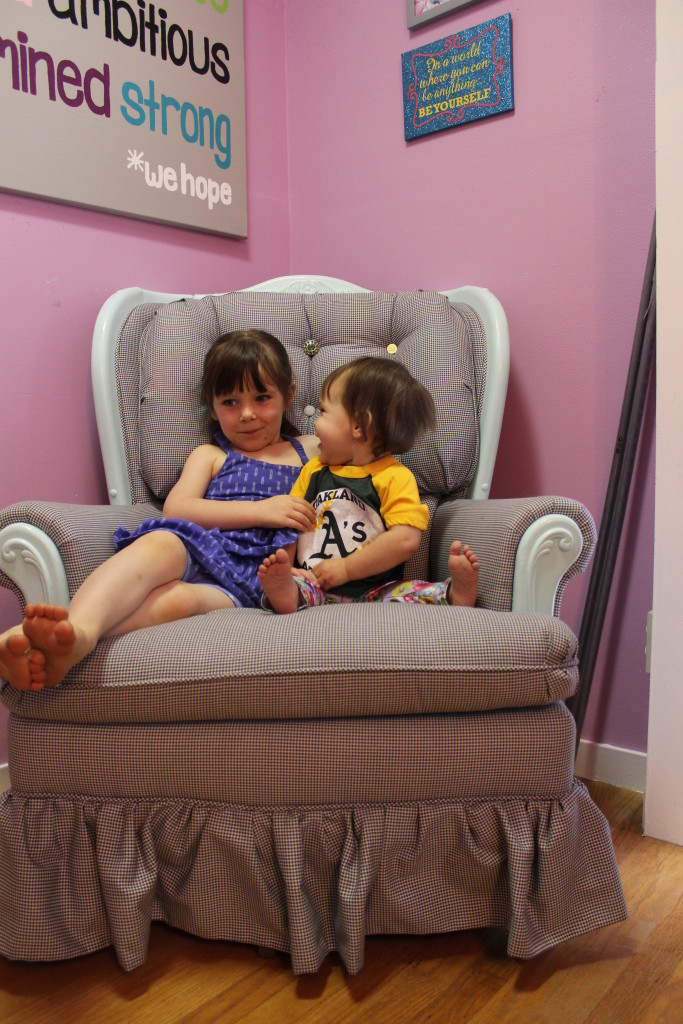 It’s really quite awesome. I love to see the two of them play. Zoe continues to rough house with Merritt, and Merritt continues to try and keep up. She’s getting to be a bit of a bruiser, which is pretty hilarious. If Zoe does something that Merritt isn’t too much a fan of she will literally shove Zoe. The first time it happened Zoe was a little surprised by it. I laughed.

She still LOVES food. My brother’s love of food was famous when he was little. But my mom said a week or two ago that Merritt might trump him. People don’t really believe me when I tell them how into food she is. But then they see her grunt and get so excited whenever she sees you eat anything or sees her own food and they start laughing and understand. You basically have to accept that you can’t eat in front of her without her demanding that she try whatever it is that you are eating.

She has also started to try to use utensils and yells at you if she’s sitting at the table with everyone without a fork of her own. She used to just bang it around, but she’s actually got a pretty good use of it now. It’s not like it’s successful all the time, but I am a little amazed with how often she attempts to stab at her food and actually gets some at the end of her fork. She also likes to try to scoop with a spoon and loves to grab my spoon when we’re eating yogurt and feed herself. 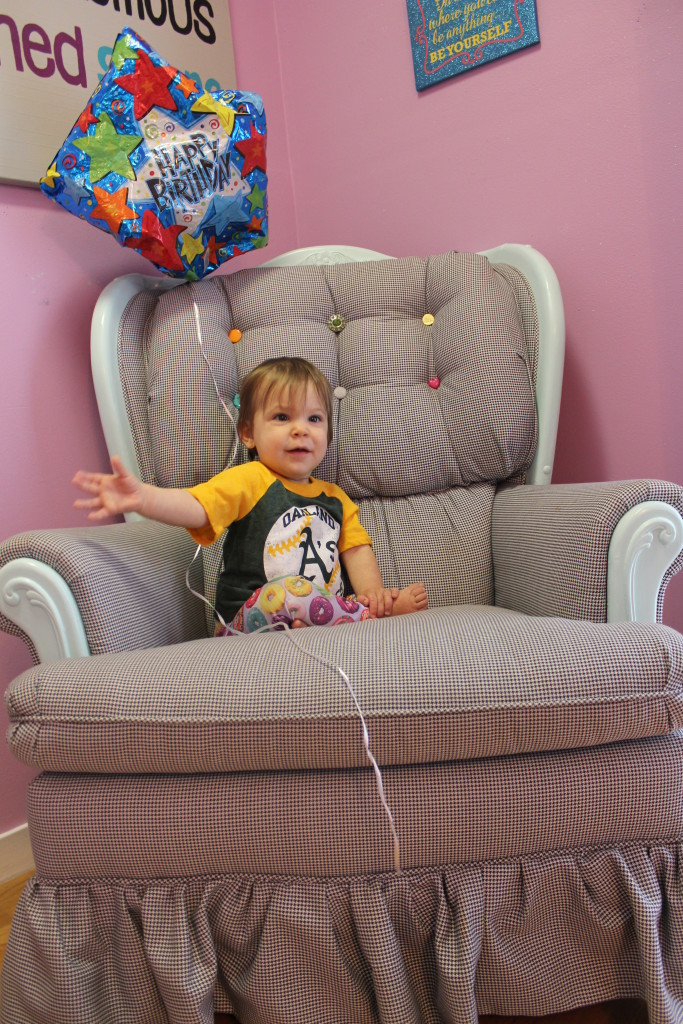 Balloons and cars are her favorite toys still. She just about died with the balloons Zoe got for her birthday and has been chasing them all over the house. When you hold her so that she can grab them she thinks that is just about the BEST thing in the world and SQUEALS in delight. She’ll point to them and say their name (it sounds a little like, “blll-aaa.”) Sometimes Zoe takes them away (after all, they are her balloons) but most of the time she’s okay with letting Merritt play with them. Cars are rolled around all over the place and anything with wheels is examined very closely. My dad and Wendy got her a couple cars for her birthday that roll back to wind up and then fly across the room. Those are, of course, adored.

She’s finally through the night with sleeping. HOORAY! She’s also been on one nap for about a month. She fought the morning nap for months, and it finally seemed like she was okay enough to switch to one nap. She’s been a little cranky in the evenings, but I remember it took Zoe about a month to make the switch. Merritt is doing well with it and usually takes about a 2 1/2 hour nap around 12:30 or so. She seems content with that schedule and it actually makes things easier in terms of planning activities and running errands.

She LOVES music and will dance and bop around. I can’t tell quite yet if there’s a certain kind of music she likes more, but she will take note of when songs change and look at you and grunt, “Where did that song go?” It’s pretty cute 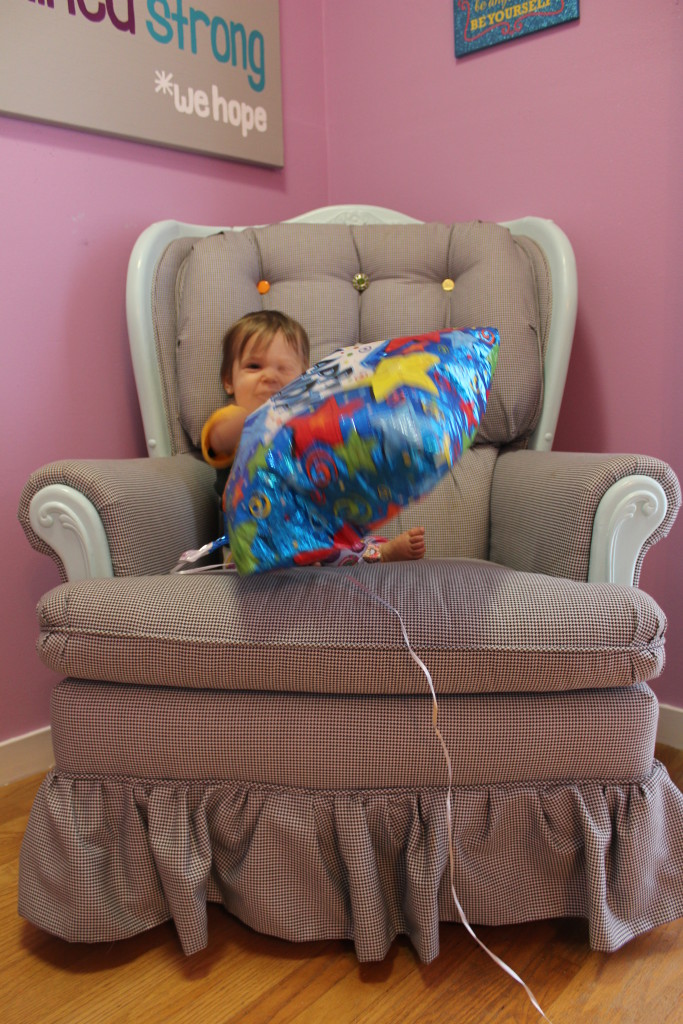 She is our crazy string bean. I actually asked the doctor to make sure this was okay because she eats SO MUCH food, but gains less than a pound a month. She’s stayed in her weight curve the whole time though and takes about 4 shits a day (literally) so she said it was nothing to worry about, little Merritt has just got a really fast metabolism.

So there you have it, our little ONE YEAR OLD baby girl. I guess we have to stop calling her baby now 🙂

Thank you for being such a happy little human Merritt. You are just a joy for everyone to be around and we love you so much!