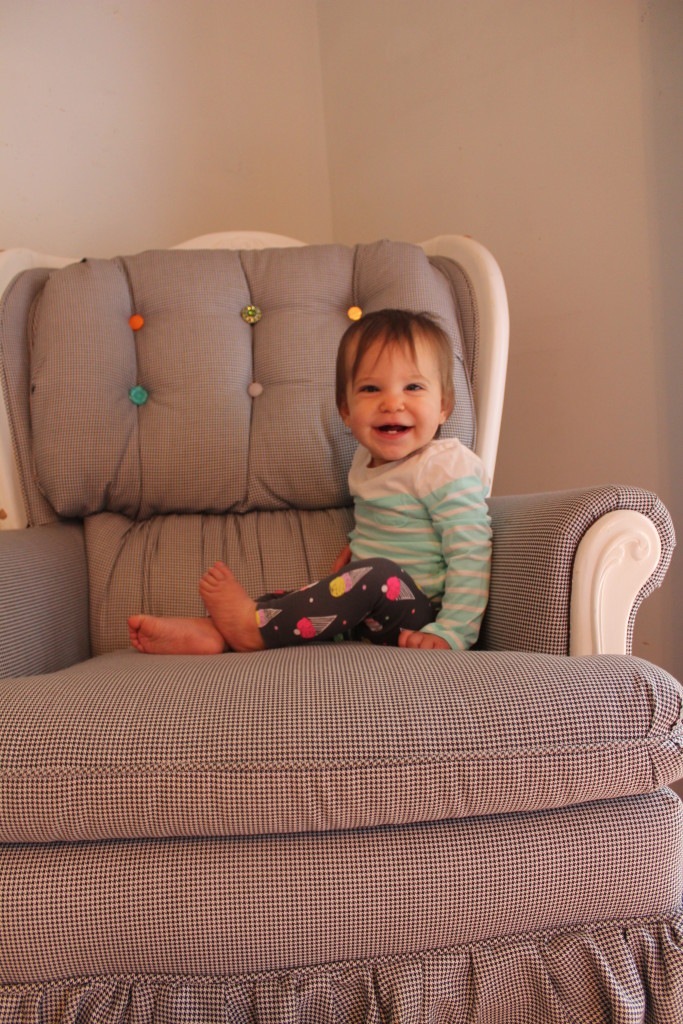 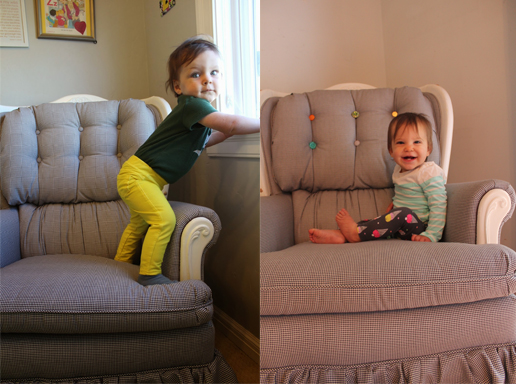 I felt like the ice cream pants were very appropriate. If you hadn’t guessed, yes: still food. Still the love of food. It’s interesting though because this month she has gotten a lot pickier. She loves food A TON, but sometimes she will just not like anything you give her. She goes about it in a rather hilariously annoying way: she looks at it, takes it, and then throws it. Most of the time it’s just to the side, sometimes she just drops it to the ground in front of her. Clearly she’s not satisfied. Apparently she wants foie gras instead of crackers.

The best food in the world is still absolutely whatever you are eating. Zoe will literally have the exact some thing on her plate, but Merritt will stare at Zoe’s plate grunting that she must eat Zoe’s instead of her own. I’m not sure what the deal is with that. I usually eat meals hanging out with her and she chomps away at it. A favorite is my Greek yogurt, granola and fruit in the morning (she is now okay with me having dairy again and her eating some as well). I still encourage tastes of just about everything we’re eating so that she is hopefully not too picky of an eater as she gets older. 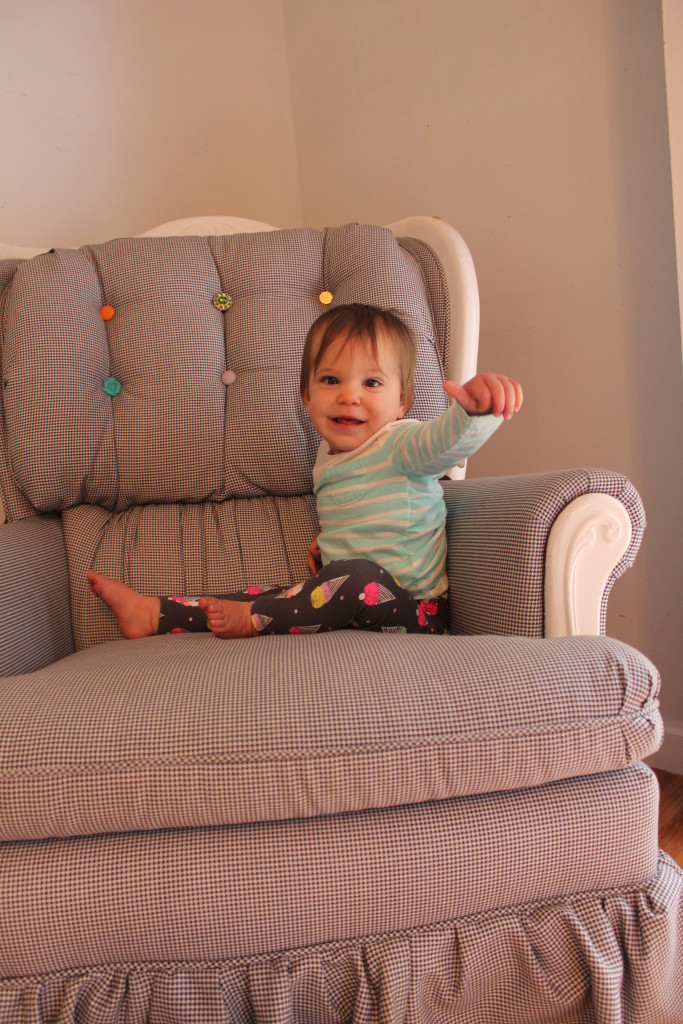 Merritt continues to not only love Zoe’s food, but just Zoe in general. Zoe is the best, her toys are the best, her room is the best. It’s adorable. She just loves Zoe with all her heart. One morning she heard that Zoe was awake (she’s an earlier riser than Zoe is) and when she heard Zoe and me in Zoe’s room she made her way as fast as she could possibly crawl and sat at the foot of the bed squealing in delight that Zoe was awake. Zoe obliged (because she actually seems to love and adore Merritt just as much) and she got off her bed onto the ground. Merritt crawled over to her and wrapped her little baby arms around her and had the BIGGEST smile on her face. And then she did it again. And Zoe thought it was fabulous and exclaimed, “She can hug now, she’s learning!” Oh my god I died. It was adorable. I literally almost started crying. That for sure got written down in her baby book.

Merritt also loves to play on Zoe’s bed. Nearly every morning when Zoe wakes up she crawls into her room and waits anxiously at the foot of Zoe’s bed for one of us to put her up there with Zoe. Zoe gets all excited too and asks for Merritt to come up with her. What usually ensues after is body slamming by Zoe and silly grunts by Merritt. They are like puppies. They crawl around and tackle each other. It’s absolutely hilarious. I look forward to this each time I know it’s about to happen. So far it hasn’t resulted in any tears. Sometimes Merritt whines and we have to remind Zoe that her body slams are too rough. But there have been no broken bones or crying yet – WINNING! 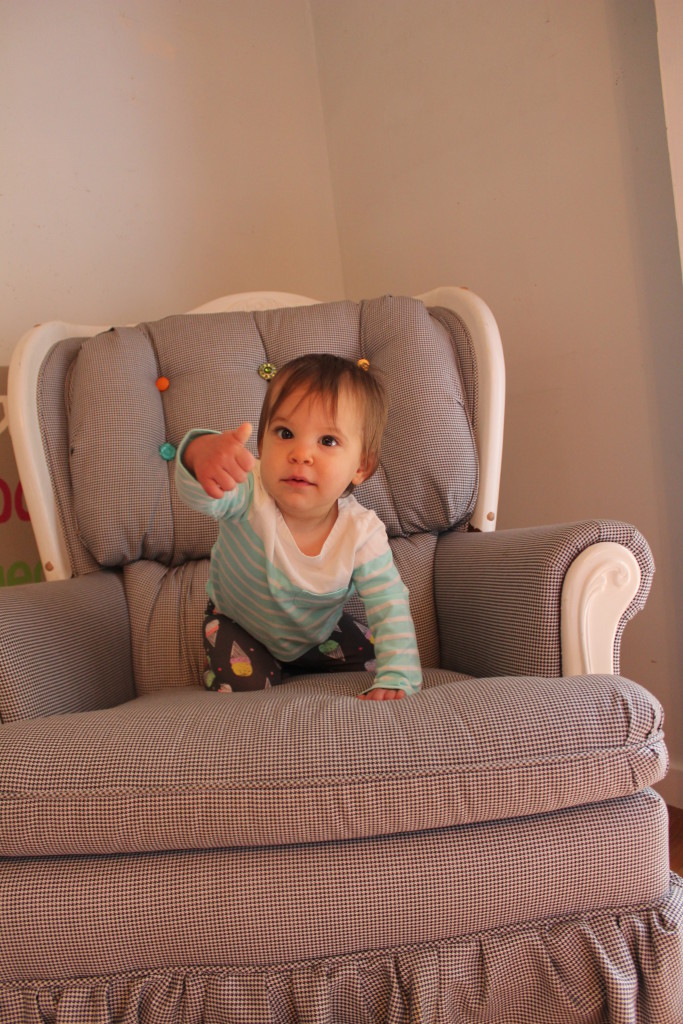 She’s a strong little cookie, that one. She loves to rip toys away from Zoe and then make a run for it crawling away as fast as she can. I always laugh when that happens.  She totally makes a run for it – she knows Zoe will soon yank it away from her so she tries to get away as fast as possible. It gets me every time.

The one thing that’s hard with them is that Merritt does want every toy Zoe has, because she adores her so much, and Zoe has a little bit of a hard time with it. I understand both sides – Merritt thinks Zoe is amazing so she wants to do what she’s doing. And Zoe gets frustrated that Merritt wants to play with all of her things. That’s usually the only time Zoe will act out with Merritt. She’s very good and understanding with her in almost all other cases, but she doesn’t like when Merritt takes her toys, or sometimes even shows interest. She’s not malicious, it’s usually just taking all the toys away before Merritt can get to them. We’re lucky that Zoe isn’t too aggressive with her (she sometimes pushes, or bops her, but it’s never too aggressive or hurtful). We remind Zoe to be gentle and try to also tell Merritt not to do what she’s doing (Merritt obviously doesn’t understand, but we don’t want Zoe to think that she’s always the one in trouble).

Other than that though, they really can play together pretty well. About 2 weeks ago Chris and I were having a serious conversation about work and it was super distracting with Zoe running all around and Merritt yelling and grunting, so we asked Zoe if she could play with Merritt in her room. Chris took them both in there and they played happily with each other for 20 minutes. It was like magic. 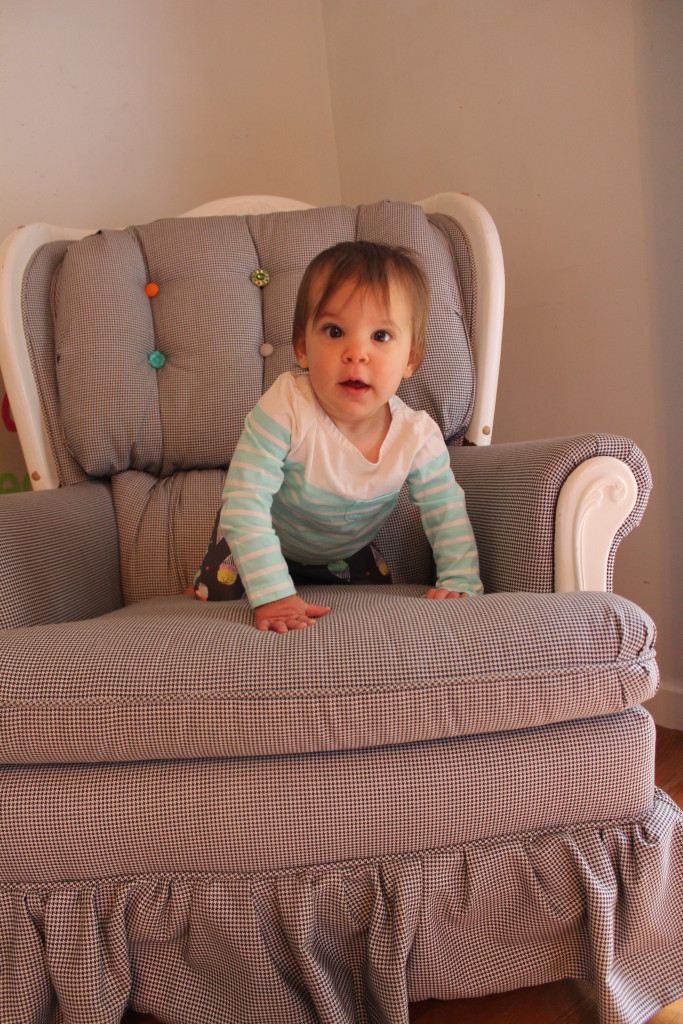 I love that they like each other so much. I really hope that sticks. I know there will be hair pulling, crying, yelling and fighting in our future, but I REALLY hope that we’re one of those super lucky sets of parents who have kids that actually like hanging out with each other. It can happen, right?

The other person Merritt loves? Chris. ADORES. He’s probably her most favorite person. It’s a really close one between him and Zoe, but she does SQUEAL if I’m outside with her and she sees Chris’s truck come down the driveway. Mommy is comfort, daddy is everything else. I come home and I get a nonchalant crawl over with a smile, “Oh! Hi there mom!” When Chris comes home, it’s head down and motoring over to his feet, hands up with grunts and whines for him to pick her up. It’s quite adorable to see how fabulous she thinks he is.

She also reminds me so much of him. She still really seems to love to see how things work – trying to put the tops on things, spinning wheels on toys, putting things in and out of baskets. She focuses on learning one thing at a time and really trying to figure out how things work. And she gets really engrossed in things. Zoe is like me – all over the place trying to figure out 17 things at the same time. Merritt is like Chris – she sits and focuses on one thing at a time 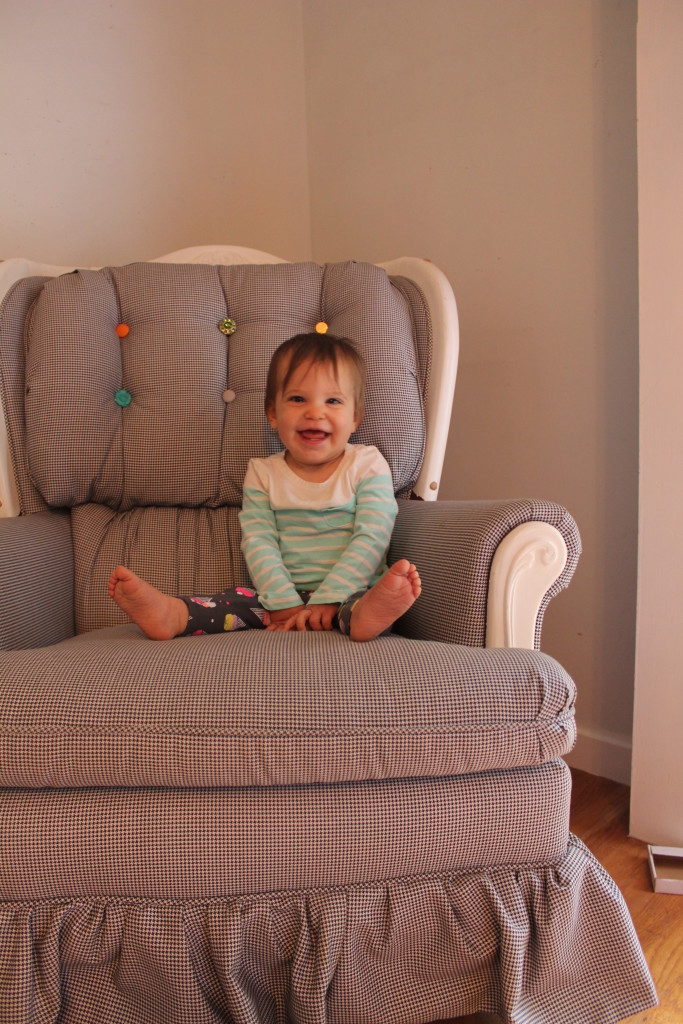 She’s not showing a ton of interest in walking yet. She’s started to cruise on things and shifting from one object to another while standing. She stood up with confidence on her own at the park about 2 weeks ago. I was there with friends and all of a sudden a friend of mine and I looked over and noticed that Merritt wasn’t holding on to me anymore and was standing on her own for a good 10 seconds. And she had SUCH a big smile on her face, like she knew what a great thing she was doing. It was pretty adorable. I’d guess that she’ll walk earlier than Zoe (14 months), but we’ll see.

She’s full on had her first work officially: momma. Yay! 🙂 She’s said “dadda” we think too and sounds like she’s trying to say other things. Zoe asked over the weekend, “Can she say Zoe yet?” Cuteness overload 🙂

So that’s how life is with our happy, mostly smiling (though she was sick this past week and wasn’t super happy), strong, thoughtful little lady. She’s a cutie and we all love her so much. Crazy that she’ll be 1 in a month!

« Our Closet Gives Me the Heebie-Jeebies
Pretty in Pink »