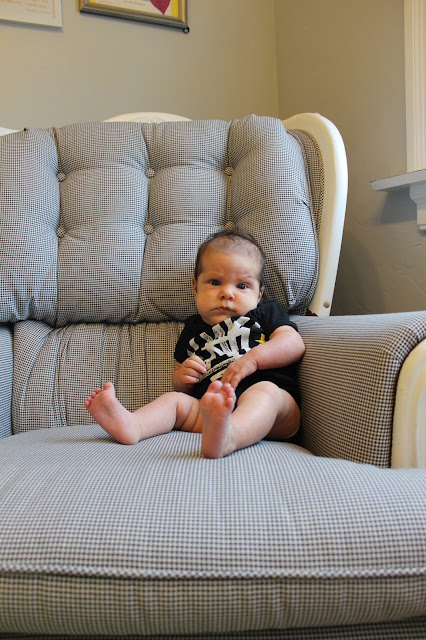 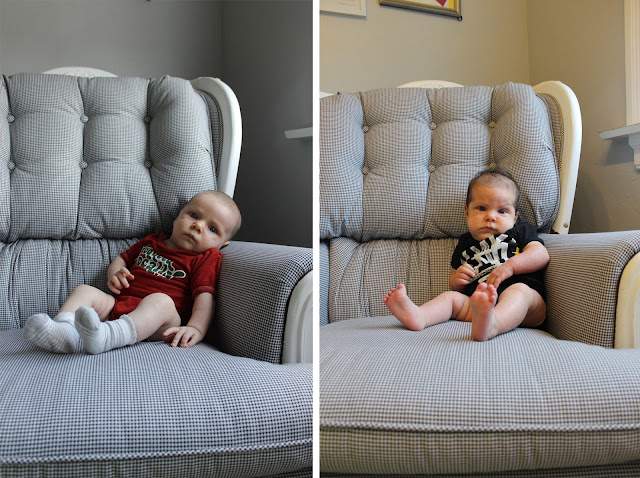 The BIG difference this month is that she is SUCH a happier baby now, yay!!! It took a little bit of us trying to figure things out to get there. But we did, hooray! First we discovered she was extra super gassy, and now she takes medicine for that and it helps a lot. Then we found out she has acid reflux and she takes medicine for that as well (which helps a lot too). But she was still having a lot of fussies so I eliminated dairy from my diet and literally almost instantly she was SO MUCH HAPPIER. Chris is lactose intollerant and I think baby girl just has a more sensitive GI tract. I know it’s fairly common with little babies, and our little just happens to be one of those kiddos who seems to be a bit more sensitive this early on. I know they can “grow out of it,” so we’ll see if she’s still as sensitive to dairy as she gets older. We also discovered that she doesn’t like spicy foods as well. Luckily I’m not a super spicy person anyway, so that one isn’t the bummer to me like dairy is (I LOVE ice cream and cheeeeeessseeee).

It is so much better having a happier baby – for everyone. I’m so happy that she’s not uncomfortable all the time and seems to enjoy life more 🙂 She is full of smiles these days, which I love to see. I love rolling her over onto her back when she wakes up from a nap, seeing her refocus and wake up and then she gets a big ol’ giant smile on her face when she realizes it’s you right there in front of her. Makes my mommy heart melt. 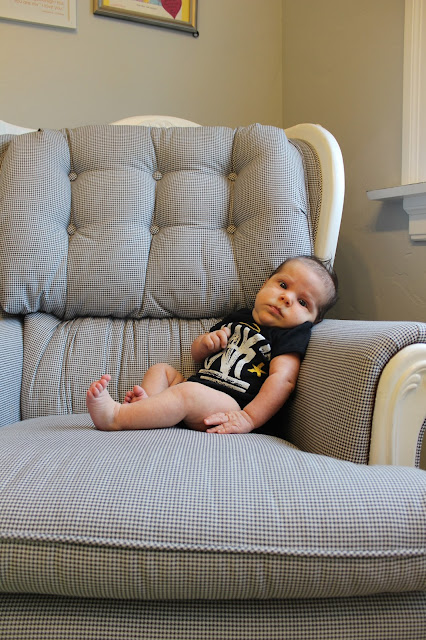 She also smiles a lot at Zoe and seems to really like to have her around. It’s weird, they already seem to have a really great and special connection. It’s crazy how fast it seems to have formed. Zoe LOVES the baby and our biggest problem with her and the baby still is her not being able to hold and see her whenever she wants. She doesn’t like it when Merritt cries and will walk over to her, pat her, hug her and tell her, “It’s okay baby.” Merritt also seems to calm down when Zoe is around. One morning Merritt was just SCREAMING her lungs out, and Zoe came into the room: boom, quiet in an instant. It was crazy. I love how much they already seem to love each other. It’s a special bond I hope never goes away.

Merritt is full of smiles, but no laughing yet. She does have a very noisy smile and will make cute little noises when she smiles her giant smile. I love that. It’s almost like she’s trying to laugh, but can’t quite yet. Cutie.

She LOVES to stare at the mobile above their changing table. Zoe went through a phase where she enjoyed it, but Merritt LOVES it. She could be crying and be so upset and the second she goes down on the table and I spin that mobile around she’s got a big fat grin on her face. Sometimes the mobile gets her so worked up that she kicks her legs, flails her arms and lets out little whooping, cooing noises. It’s hilarious. And adorable. 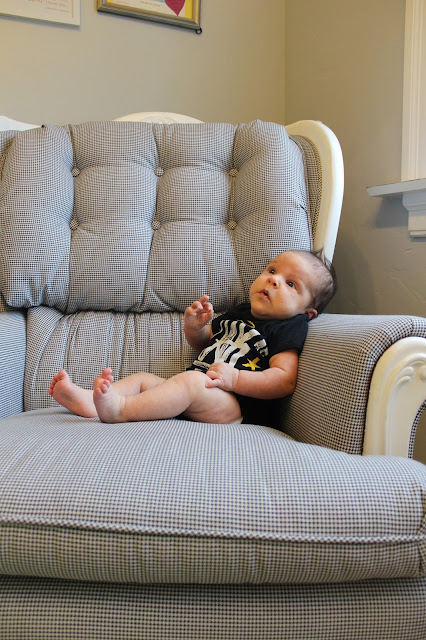 Sleep has been slowly improving and better with kiddo #2. Tracking her sleep has gotten our morning nap nailed down and her bedtime, so that is awesome at just 2 months. The later naps are still up in the air, they just depend on how much she sleeps that first nap. She doesn’t like to be away more than 90 minutes before she wants to take another nap. She likes her sleep 🙂

Bedtime for her is 6:15-6:40, depending on how the day goes. That really seems to be when she has the best time going down. We haven’t had a night of SCREAMING in a while, so that is wonderful. She does seem to be going through a phase right now where it takes her almost 2 hours to finally get to sleep. She’ll fall asleep for 5-20 minutes, then somehow get woken up and be upset that she’s not asleep anymore. She doesn’t cry too bad, more of a little wimper, “Someone come help me please…”

She has a habit during the day of waking up when her first sleep cycle is done and then having a hard time getting back to bed. Sometimes it takes 20-45 minutes to get her back asleep (again, like her trouble falling asleep at night: getting to sleep for 5-20 minutes and then something waking her up, but during the day it’s more like fall asleep for 1-5 minutes and then something wakes her up). We’re slowly improving though, so I’m glad. 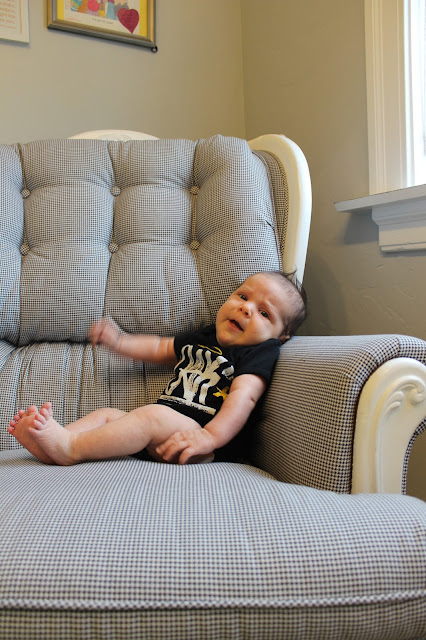 Nighttime has also improved in that she usually only wakes 1-2 times and then will go back to sleep (and last night she made it to 3am and only woke once, HOOOOOORAY!) Sometimes she has trouble getting back to sleep, but we’re working on that too. We are already putting her down (both for naps and nighttime) still partially awake so that she can teach herself to fall asleep, so I know that’s part of the challenge. We did this with Zoe and she is now GREAT at falling asleep on her own. We hardly ever rock or nurse her to bed, and I know that can make things challenging in the beginning as they are figuring so much stuff out, but I don’t want to start a habit that we’ll have to break.

Nursing has been a little bit challenging so far. Merritt is definitely more particular than Zoe was about feeding. Zoe could eat anywhere and had no problem with it. But Zoe also wanted to eat ALL THE TIME. Merritt will usually eat every 3-4 hours and dump each boob each time. She however is very particular about where she eats. She doesn’t want it noisy or somewhere she’s unfamiliar with. If she’s not comfortable, she won’t eat. Point blank. She also won’t nurse if she’s too tired and wants to sleep. I’ve got to get her before she’s too sleepy and in a place that she can relax in. The girl knows what she wants 🙂 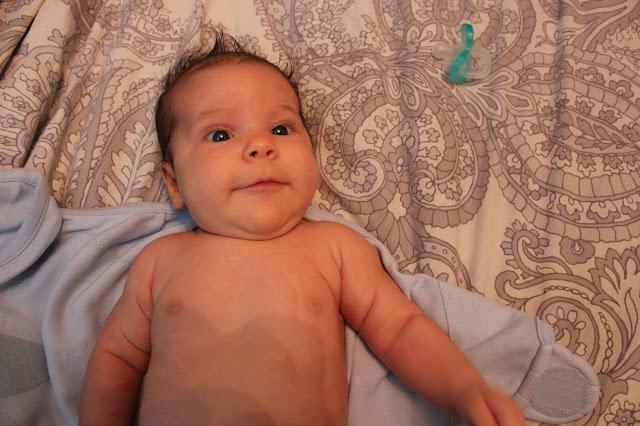 I went back to work at the A’s this month and have scaled back my schedule a lot. I used to work almost every home game and now I don’t work mid-week day games and never two days in a row, which means about 1/3 to 1/2 the home games. It’s just not worth making myself over tired and not spending as much time with her when she’s so little. Plus, it’s hard getting both those kiddos down for bed all by yourself, so night games are a bit challenging because it’s two against one at bedtime for Chris. 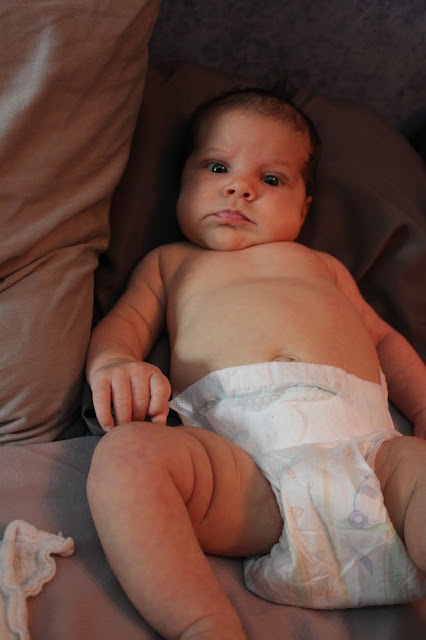 The crazy thing to me is that both girls look like each other, but Zoe looks like Chris and Merritt looks like me. It’s so interesting that they can look alike, and yet like each very different looking parent. Chris is pale skinned with light hair and I’m olive with almost black hair. And the even crazier thing is that I could end up having two kids with blue eyes and I have brown eyes and Chris has green eyes. I would have thought statistically (and genetically) that at least one of them would have brown eyes, but Zoe’s have definitely stayed VERY blue and Merritt’s eyes are blue for the time being. Hers have plenty more time to change color, but they are a very dark steel blue with light blue on the inside around the pupil. It’ll be interesting to see how they change.

Well, I think that’s about it for the 2 month mark. I’m looking forward to more progress next month and seeing what her new discoveries are! I love just how much they learn and observe in these first few months. It really is such an overwhelming time for them, so much to process and discover. But I think she’s up for the task 🙂

« Picardy Poll: What’s Your Favorite Metal for Hardware?
Oh Yeah, Remember that Project for my Brother… »