Oh, don’t you worry, I am about to shower you with adorable Halloween cuteness. Get ready (spoiler: my most favorite Merritt picture is in this post. It just edges out her smiley 4 month picture).

Halloween means pumpkin festivities and an excuse to still dress my girls in a costume they’ll let me 🙂 I know next year Zoe will probably tell me what she wants to be, so I relished in this possibly being my only year I could have them both be dressed up together in the same theme. I know, mom award over here 🙂 Priorities 🙂

Earlier in the month we went out to a pumpkin patch about an hour away with a bunch of our friends and had fun picking out pumpkins, running amok and playing in a corn box (seriously the best thing ever). 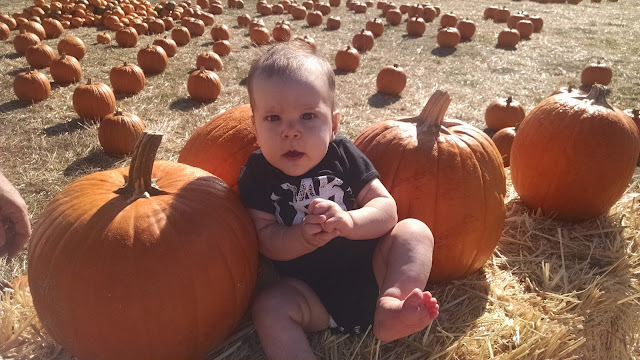 And she actually seemed to really like the corn box. I think she liked how cool the corn was and the yummy texture. 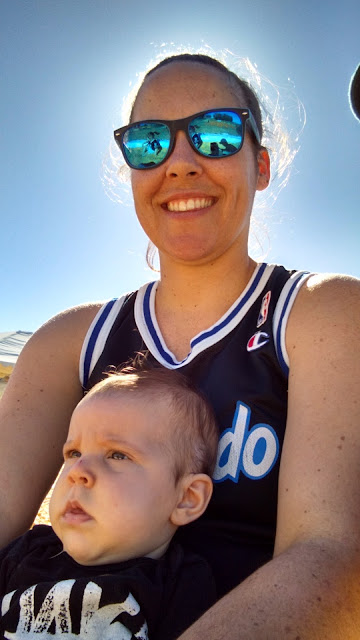 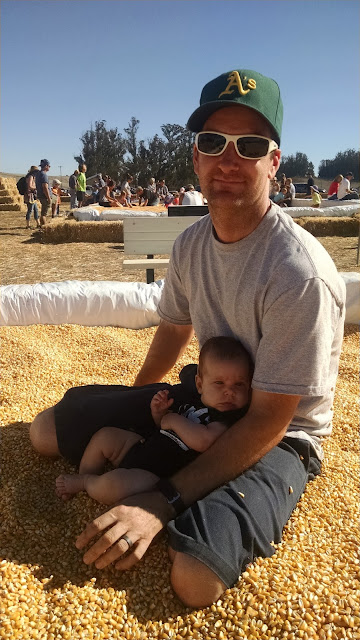 Oh, not pensive…HAPPY with daddy (favorite picture of her, she’s just so damn happy I could burst) 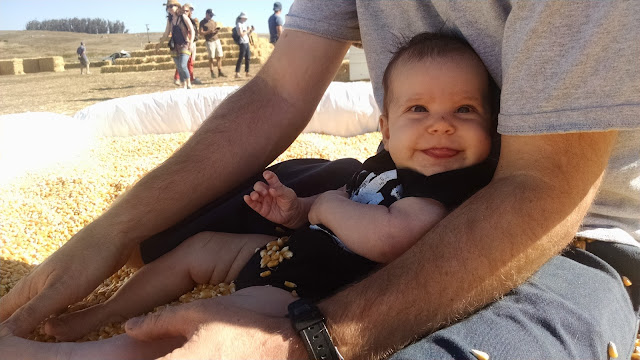 Zoe took the corn box seriously. Many somersaults, leaps into the box, and stuffing of the corn everywhere was had 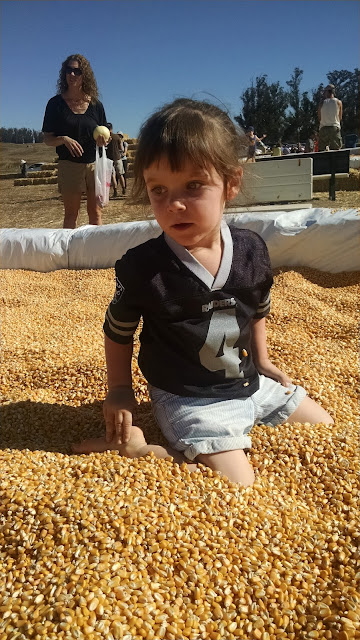 And we got to feed some animals 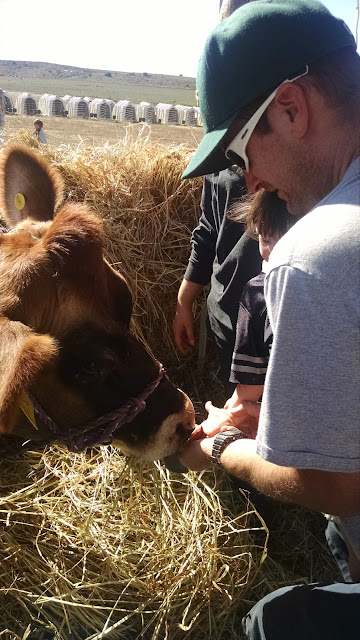 And then of course getting pumpkins means there is pumpkin carving, and pumpkin painting (Zoe had a lot of fun with that one last year, so I decided to do it again with her friend Sammy) 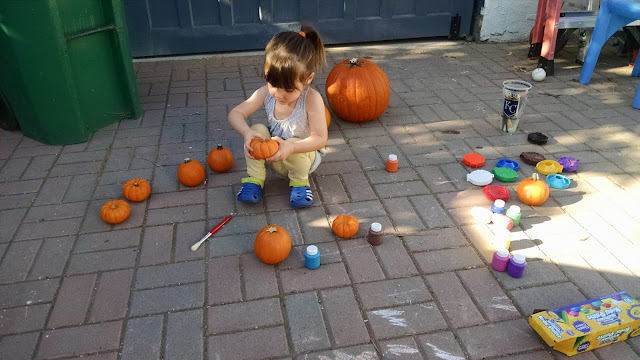 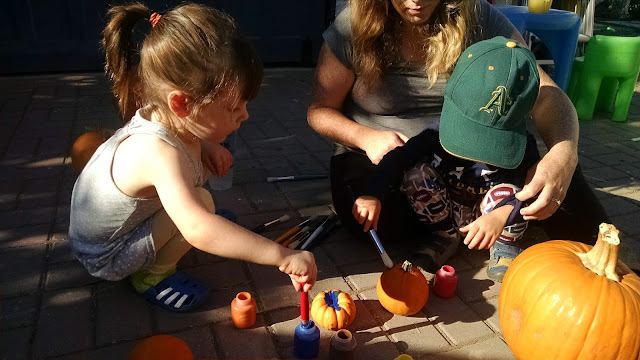 Both kids actually found playing with all the toys in the backyard more fun than painting pumpkins this year, so my friend and I carved and painted them, lol. It was worth a try, right?

So what were the girls? Well, Merritt was – OF COURSE – a football for Halloween. She was, after all, called “Little Football” when she was in my belly, and Zoe was a baseball for her first Halloween, so it seemed only fitting 🙂

I was telling my friend at work at the A’s about a month+ ago what Merritt was going to be a for Halloween, but that I couldn’t come up with a good idea for Zoe. Then she had the genius idea that Zoe could be a Raiders football player. YES! So awesome. Zoe does love going to Raiders tailgates and although she would rather watch Willy Wonka than football on Saturdays and Sundays, we’re working on it 😉 Want to see their costumes together? Of course you do 🙂 It was definitely an adventure trying to get them to sit together

I couldn’t help my self obviously 🙂

The full costume didn’t make it to trick or treating time because of a pants change that needed to happen. And the girl loves her rain boots. But I think people got it with the Derek Carr jersey and the eye black. She even had a Raiders bag to put her candy in (and her Willy Wonka purse came along for the ride too) 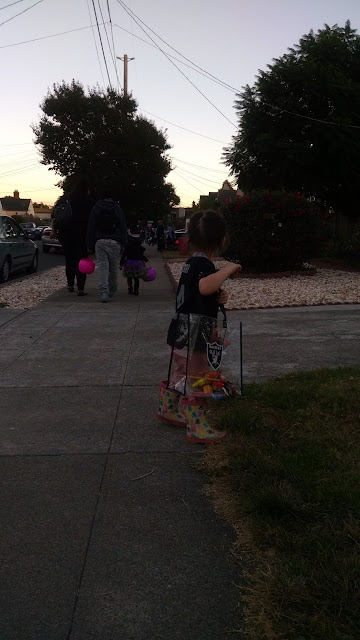 Trick or treating was lots of fun and Zoe loved going from house to house. She got pretty good at saying “Trick or treat” and “thank you” by the end of the night. She has an obsession about doors and frequently ordered neighbors to, “Close your door!” when she was walking down their stoop. Luckily she’s not quite 2 1/2 so people found it hilarious 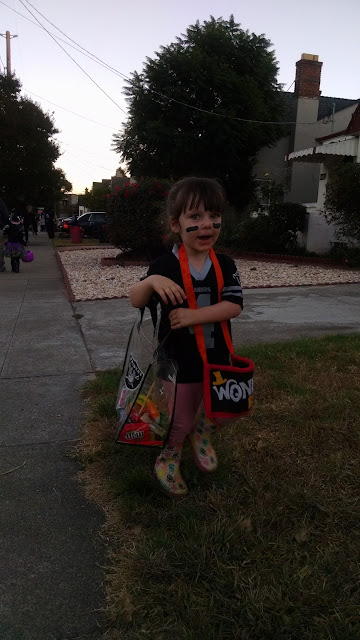 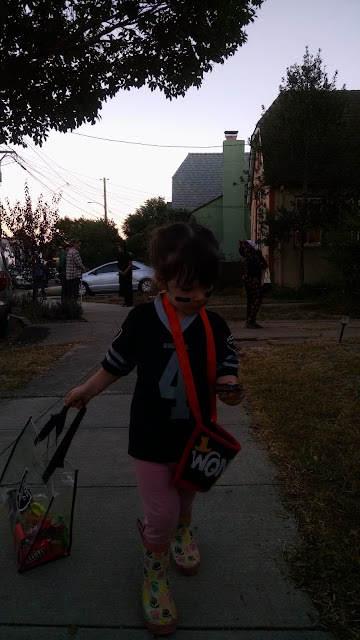 We’ve let her have 1 piece of candy each night in exchange for being good during the day (like I said, I love bribing). And she loves to tell us each night that the (now empty) bowl that we used to hand out candy to visitors was not for her, “That’s for other people, they ate it all.”

I love Halloween with my girls. I can’t wait till they get into it. I loved picking out what I was going to be each year and designing my costume and sewing it with my grandma. It was a nice tradition of ours. Maybe Grandma Peggy will get to sew some for her great grandbabies 🙂 Whadya say Grandma Peggy?!