If you follow us on Facebook, you would have seen that oooohhhhh almost 2 months ago Chris installed the fronts on our bed drawers! Yes, that’s fucking right, work was done on our bed! Our bed that has sat unfinished since Zoe was a little tiny baby! Let us also remember that this is a project we started back in AUGUST OF 2013! Holy jesus fucking christ we need to get our shit together and finish this thing. I keep hounding Chris that when we DO finish it he needs to write a post called “Why I’ll Never Build Another Bed,” lol. This project has killed us. 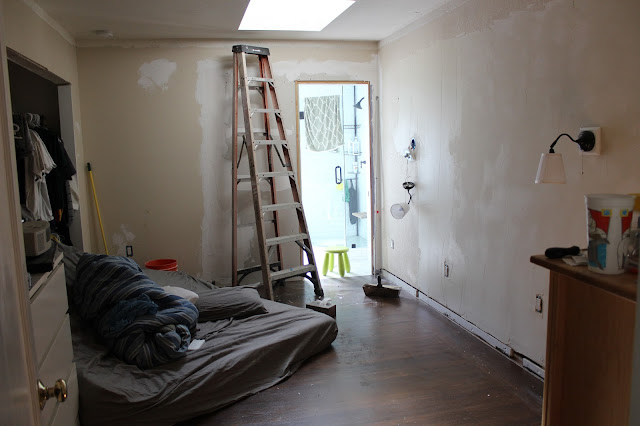 God I’m glad it doesn’t look like this anymore.

Then we decided that we would finally build our bed in August of 2013. That’s right, we had no bed frame before that and our mattress was on the floor. That meant for my entire pregnancy with Zoe I got up and down from the mattress on the floor night after night to make my nightly pees. It wasn’t as unpleasant as it sounds. I probably would have been REALLY pissed off with pregnancy #2 though.

We had a plan and we got to building 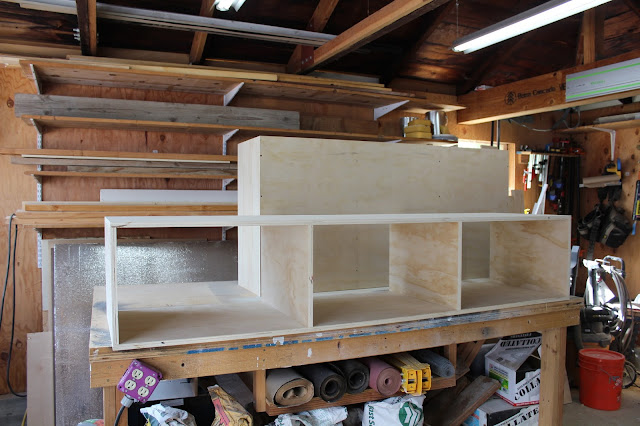 And in January of 2013 we moved the bed into the room. No more sleeping on the floor! 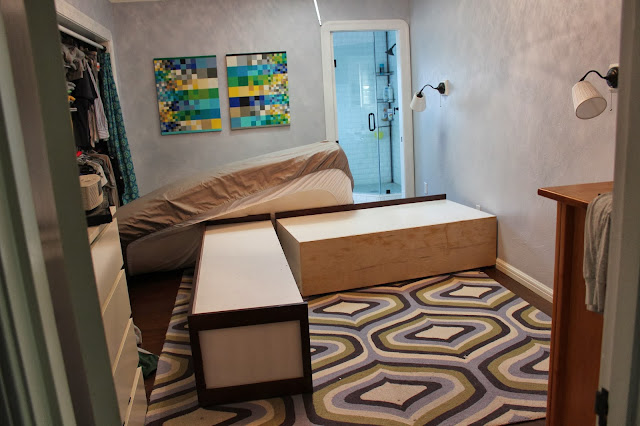 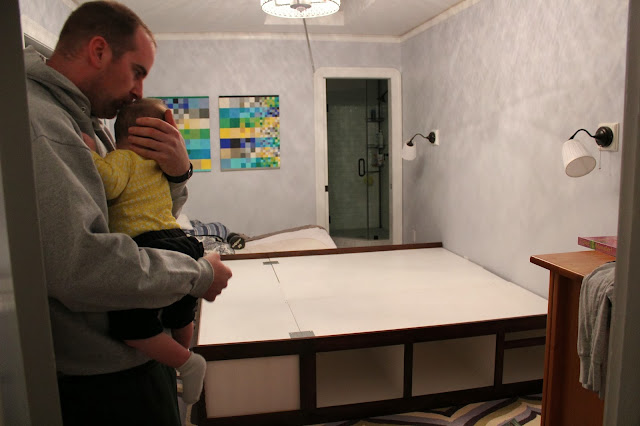 Then it took us another, ohhhh 3 months to get drawers in there 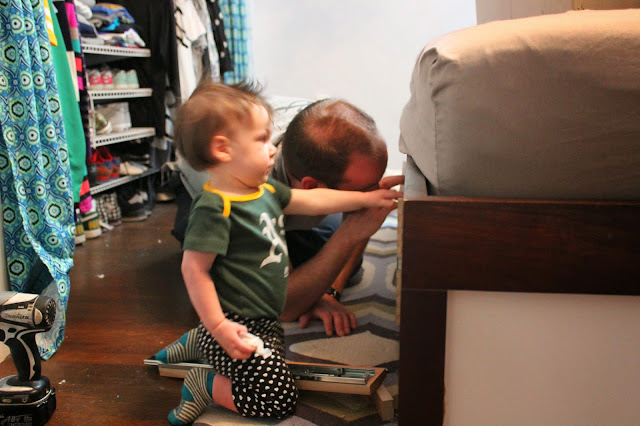 And then the bed sorta sat like that. For about a year and a half. I can’t help but laugh at us. But well, we had an almost 1 year old, we were just about to go out on our own full time starting our own business, it was the middle of baseball season (when I used to work nearly every home game) and in another few months I would be pregnant again. So, I guess looking back on it I totally understand why it took us a long time 🙂

But alas, Chris did get those drawer fronts on at the very end of June (and I’ve totally forgotten to post about it apparently). I didn’t get any good photos of the work being done because, well, Merritt was just a week old so she was attached to me and Zoe was at my dad and Wendy’s house that day. I was still in survival mode 🙂 I remember hearing very LOUD noises coming from our bedroom though and I wondered what the fuck was going on. Chris had all the doors closed in an attempt to not freak the baby out and wake her from her slumber. Eventually after this went on for close to 40 minutes I wandered in there wondering what the hell he was doing (well, I actually suspected he was putting the drawer fronts on, but I didn’t want to get too excited). I came across this

Also, do you like the state of the top of our bed in that photo? Clearly MUCH laundry needed to be done (and I was getting out my regular clothes from the attic as motivation to get a “new” wardrobe once I had lost enough baby weight).

What do the fronts look like? Well, here’s a really shitty cell phone pic I took 2 minutes ago 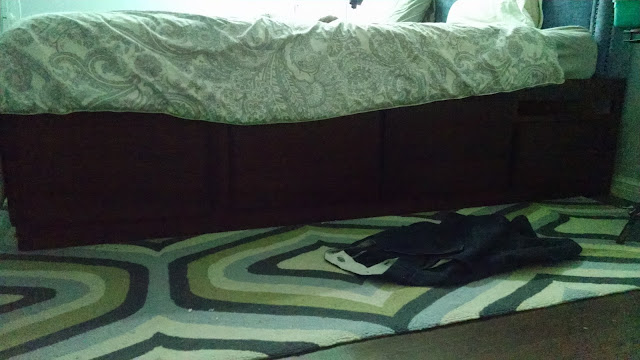 Why is it a shitty cell phone pic? Well, because there’s a sleeping baby on the bed and I didn’t want to even take a SLIVER of a chance of waking her 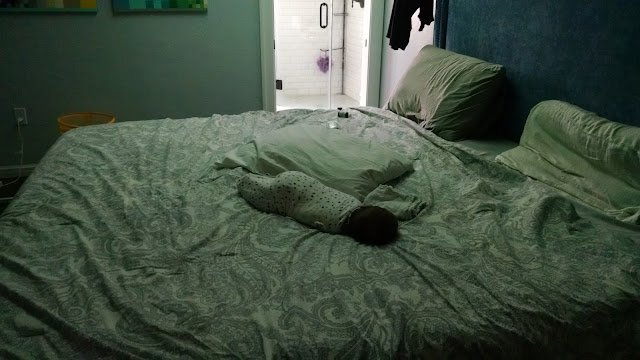 Yes, yes, I know you’re not supposed to put babies to sleep on their bellies when they are this little. But little one can hold her head up and she HATES to sleep on her back. This is just about the only position she’ll sleep in (or strapped to your chest in the Ergo). So we’ll take what we can get. Would you like to see smushy baby face cuteness? 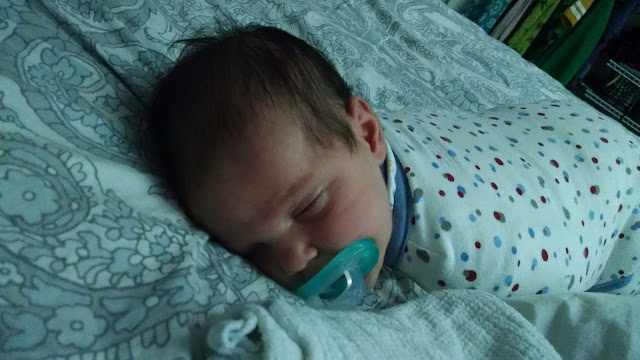 Smushy! I still can’t get over how much hair she already has compared to Zoe at the same age.

Oh, but back to that bed. We still need to install the hardware… 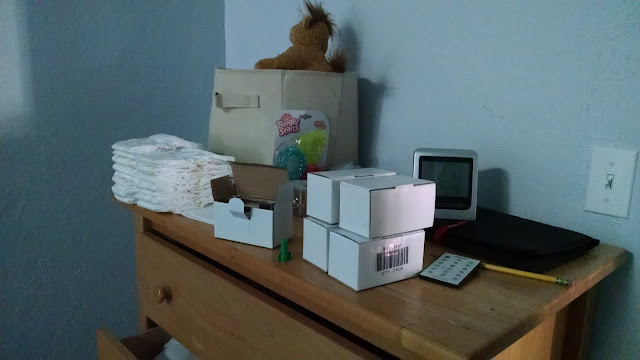 But honestly, after that, I think the bed is OFFICIALLY finished. Holy crap in my pants I can’t believe it’s almost DONE. Then I really need to do a budget breakdown for this project because it actually didn’t come out to that much cheaper than buying one. Oh well. And Chris needs to write that post about why he would never do this again. At least we can say we built it ourselves…?