So, I don’t know if you remember or anything, but WAY back when (like, maybe a year ago even, I have no idea because I can’t even find the post where I talked about it), I was going to be working on a project in SF for my brother. I was SUPER excited. It was a 2 bedroom condo down to the studs that my dad and I were going to organize the work for. It was way too much work for me, Chris and my dad to handle, so my dad and I were basically going to act as GC’s and manage all the work that would be going on.

Well, you might wonder why I never talked about it again…

That’s because the project went insane. I don’t want to go into too many crazy details because I don’t want to identify the property or events too much, but the past owner was INSANE. Like, certifiable CRAZY TOWN. Without going into too much detail the events that led me to not talk about things for a year while things got sorted out involved 1 police calls to the location, one crazy person locking themselves inside, one physical threat, tools stolen, 3 times a locksmith needed to be called, a chainsaw to saw a door open, and a court order keeping crazy pants away. Yes, I told you, INSANE. It was quite the adventure and after I wasn’t scared after a particularly eventful day, we all just had to laugh at the situation. It was from a movie or something.

Anyways, now that project is back on. A contractor was working on it while my brother was thinking about selling it to someone, but things didn’t work out super great, so we had to let the contractor go. It took several months to just get drywall up. But now we’re ready to get going again. I met with a contractor out there this morning and am meeting with another one tomorrow morning. We don’t really want to be at the jobsite too much, so I’ll hand the work off to a GC we feel comfortable with and I’ll go periodically to check on things. I’ll make sure the quality is good (it’s in a great neighborhood, so we want to make sure it’s done right) and that the design is going in the right direction (I’ve made most of the picks for things, but there are always other things that come up along the way).

And honestly, not much has changed. Though there is a new little cutie in the space 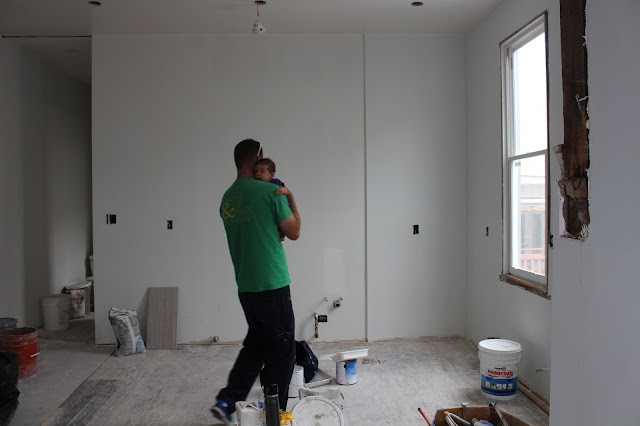 Merritt needs to make an appearance on job sites as well, of course! 🙂
So where are we with picks for things? Like I said, most of the choices have been made in the last month or two. The building is an older Victorian and I’m trying hard to merge modern and vintage together. SF is definitely huge right now with young tech money, and so that’s a driving force in the design pics. But I also want to stay true to the building and not make it some crazy loft style when it truly is a Victorian.
I have a vanity picked out for the bathroom, but I’m not in love with it (so the one in its place is what I imagine if I can find one like it for not too expensive). And the floor tile in the bathroom is already down (a pick from the previous contractor). I would LOVE to be able to change it (it’s large white-ish/beige field tile in a brick pattern – real boring, what’s in its place is what I imagine), so I may ask the contractor I meet with tomorrow what he might charge for that. But otherwise, here is the mood board so far! (some picks were a little more fixed based on things the previous contractor had done) 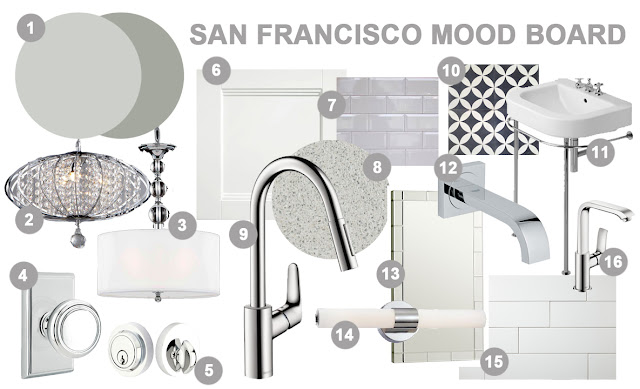 In my head I imagine someone who’s in their mid-late 30s, in tech and likes things clean. Whenever I design a space for projects for my brother I really try to imagine who the buyer is going to be when I make all the design selections. Here are the details:
1. Paint colors. The first is Ben Moore Sleigh Bells and it will go in all the common spaces. The second is Ben Moore Sabre Gray and it will go in the bedrooms
2. Bedroom light fixtures
3. Nook light fixture (this weird little space right off of the kitchen)
4. & 5. Door knob (Emtek Norwich in polished chrome) and dead bolt (Emtek modern style in polished chrome)
6. Kitchen cabinet style, American Woodmark Del Rey in Linen finish
7. Kitchen backsplash, beveled subway tile (I was going to be a bit more exciting, but the counters have a decent amount of detail and I didn’t want things to look too busy)
8. Kitchen counters, Silestone Stellar Snow
9. Kitchen faucet, Hansgrohe Focus 2-spray higharc
10. My imaginary bathroom floor tile
11. My imaginary bathroom vanity console sink
12. Tub faucet, Grohe Allure tub spout
13. My imaginary vanity mirror (I want a mirror framed mirror, but will probably get one at Ross or TJ Maxx Home Goods, so we’ll see what they have)
14. Vanity light, George Kovacs by Minka Saber LED 2 light vanity light, chrome
15. Bathroom wall tile, Matte White 4×16
16. Sink faucet, Hansgrohe Metris E single hole bandit, chrome
I’m not sure how soon we’ll start work again. We’ve got the other contractor meeting tomorrow morning, then we have to pick one, then we have to get on the schedule…it’ll probably be a couple of weeks. But I’m excited!
What do you guys think? Of the project? The mood board? Tell me! 🙂
« Merritt: 2 months
Revisions »