When we were in contract on the house we knew that we would have to replace the furnace. It was really old, not efficient, had asbestos ducting, didn’t work in some places….you get the idea. We could have spent money repairing it, but in the near future it would need replacement. We’ve resolved with this house – because we want to live here forever – that we just want to do things once. We don’t want to do “quick fixes” or put band-aids on things. We want to save up, and put our money where our mouths are and do things right.

That was a tough pill to swallow in the case of the furnace because this house is about 2500 square feet and on two separate floors. We wanted things done right, so we wanted to make sure we had the new system on two different zones (one for each floor), we wanted a good air filter, we wanted a coil for the air conditioner we would put in at a later date (it doesn’t get hot ALL THE TIME, but there are definitely times during the summer that we would want one). It wouldn’t be quick, easy, or cheap. But we wanted it done right.

We put together a spreadsheet while we were in contract of things we wanted done and researched who we would call for getting quotes on the furnace. All 3 contractors came in within the span of 3 days to give us quotes. Two came in around $12k and the third was a little over $14. We had thought it would be around $12, so we were right on target (it helps being in the trades when you’re budgeting for this stuff!) We disregarded the highest bid and went back to fine tune the two around $12k. Each had made different specifications on their estimate, so Chris clarified things, made sure they were going to do certain things, etc. We finally settled on a company called ASAP Heating and Cooling. They had a really good Yelp reviews and we liked that the owner was always communicating with us very quickly.

The timeline got pushed out a bit because the asbestos remediation took longer than we thought it would. They were supposed to have all the work done before we moved in, but instead they got started on moving day. That kind of sucked. It made things a bit crazier, but you gotta do what you gotta do. The good news is that this giant furnace taking up almost an entire closet got yanked out on the first day, hooray! 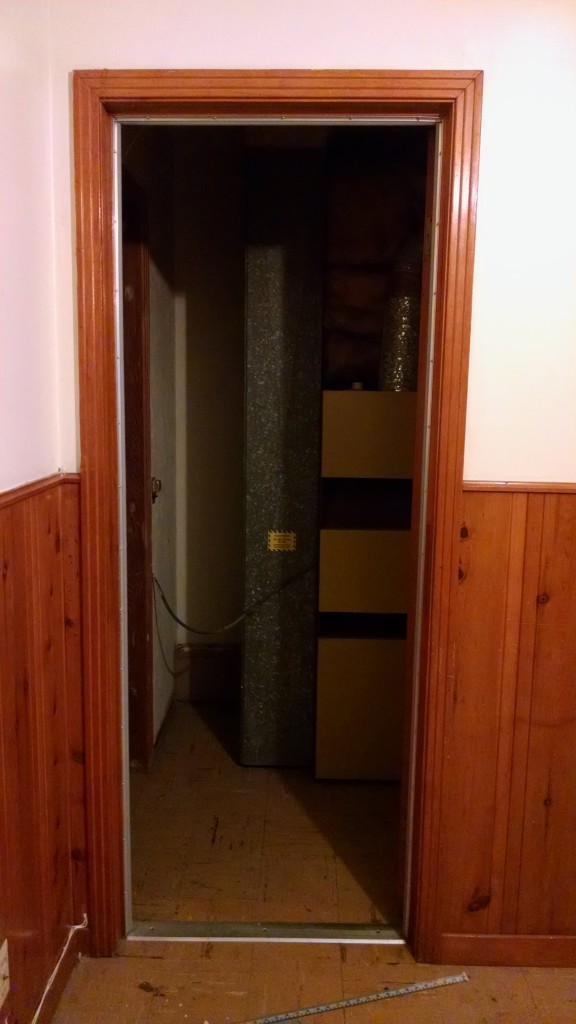 I had high hopes for this company because of all the great reviews, but Chris and I weren’t impressed unfortunately. The work was supposed to take 2 days, MAYBE 3. It took 4. And every 4 hours each day it felt like they were telling us, “Oh, the end of the day today,” and then, “Oh, it’ll be done tomorrow morning…” It was frustrating. ESPECIALLY because it was such a noisy process and because I have Merritt with me each day I had to take her out and drive her in the car for naps because we couldn’t stay home because the work was loud (totally understandable). And she only sleeps for 30 minutes (like CLOCKWORK) in the car, so I had a VERY cranky baby on my hand for several days.

They also weren’t very clean. I know this is really being nit picky, but I really pay attention to that. Whenever Chris and I work for a client we always want things looking at least AS CLEAN if not CLEANER than when we got there. I feel like that’s just a polite thing to do when you’re in someone’s space. But they were pretty messy. And with the madness of the move having their shit everywhere on top of that was frustrating at times.

Part of the plus side of replacing the furnace was getting a rebate from the state for things being more efficient. One big bummer we discovered while working on the project was that our water heater wasn’t pitched properly and causing some problems for the new furnace and therefor we wouldn’t be able to get our rebate unless it was fixed 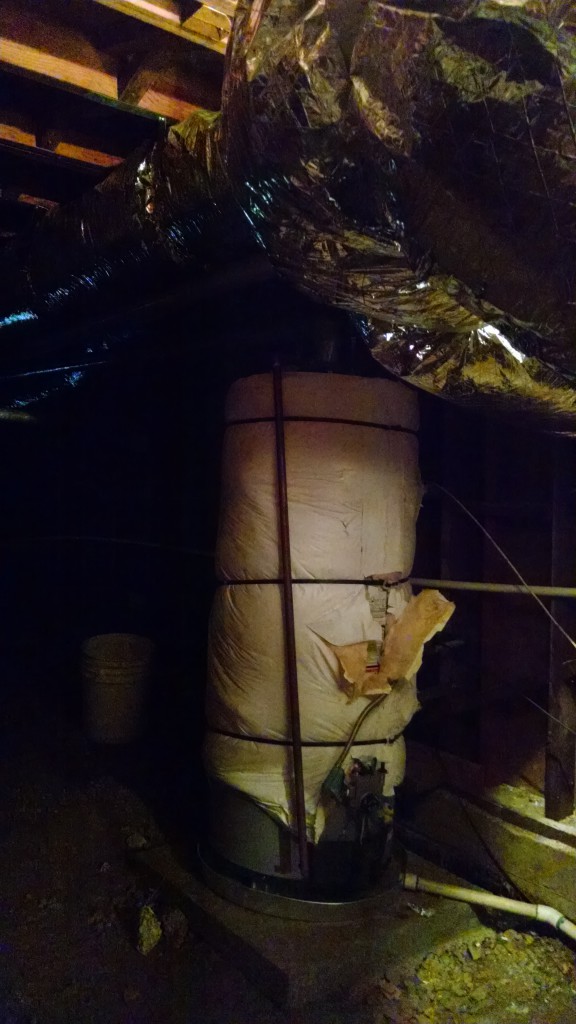 That sucked. ASAP said they would fix it, but they quoted me and Chris two separate prices (WTF?) We resolved that we would rather spend about $1500 for a new water heater than spend $400 to fix the old one, only to have to replace it in the near future because it’s on its last legs anyways. Another tough pill to swallow, but we really want things done right the first time.

So on the last day that the furnace guys were here, they were only able to do our testing for the ducting 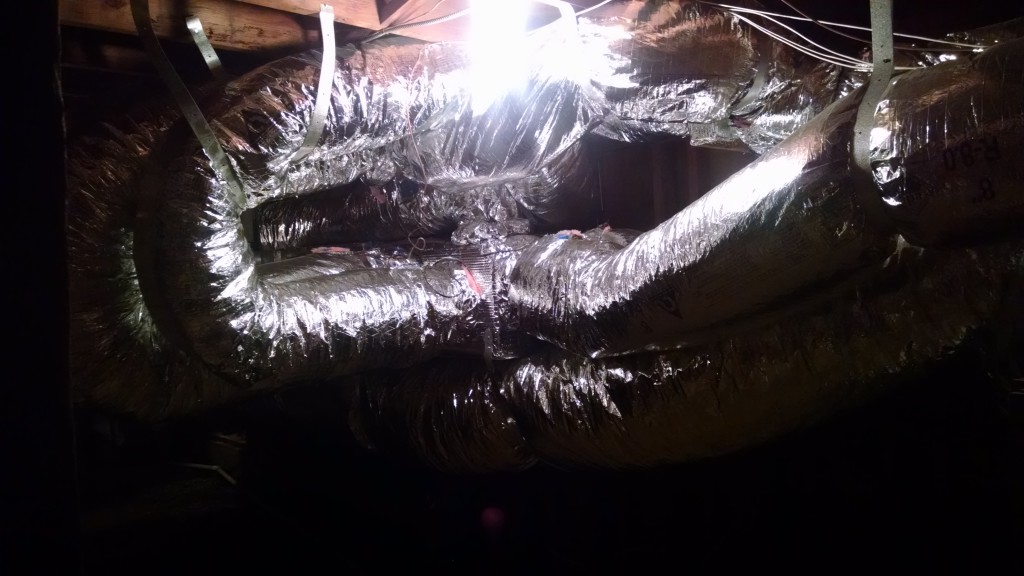 This test proved for our rebate to go through that the ducting was efficient (I believe it has to be above 82%, but I could be wrong), but in order for us to get the full rebate we would have to wait until our water heater replacement was complete (something we’re currently working on, and almost done with).

We were very happy that our furnace passed the test, but we discovered that night after they were all gone and their job was “done” that in the process of their wiring the furnace they disconnected power to 1/2 of the downstairs. That was an annoying discovery. Half of the big room had no power, our bedroom had no power, and our bathroom had no power. To find that out at 10:30 as you’re trying to get ready for bed is a little annoying. Luckily, we have Chris around 🙂 He was able to get power working to our bedroom that night, and then rewire things PROPERLY over the next several days so that all the power in the big room, our bedroom and the furnace were all working properly. It would have SUCKED to have to have called them and waited till they could get out to fix the problem. It was annoying enough that they fucked up so that our power didn’t work, but luckily we were able to fix the problem ourselves. I always love paying “experts” for things, and then they break something else.

In the end though, once our water heater is replaced we’ll have a new water heater, a new furnace, an entire closet back (that is now filled with artwork that needs to go up all over the house…) 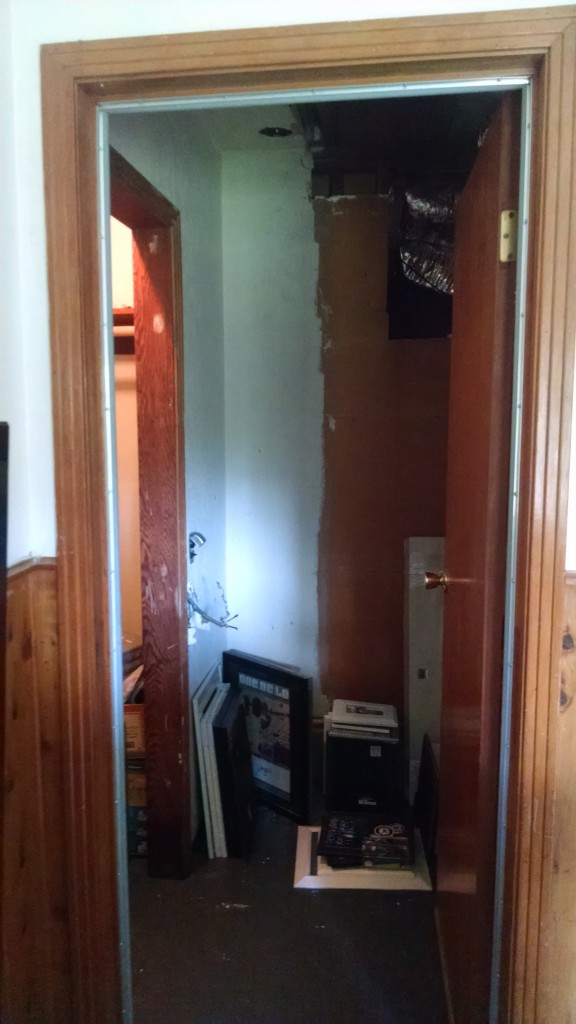 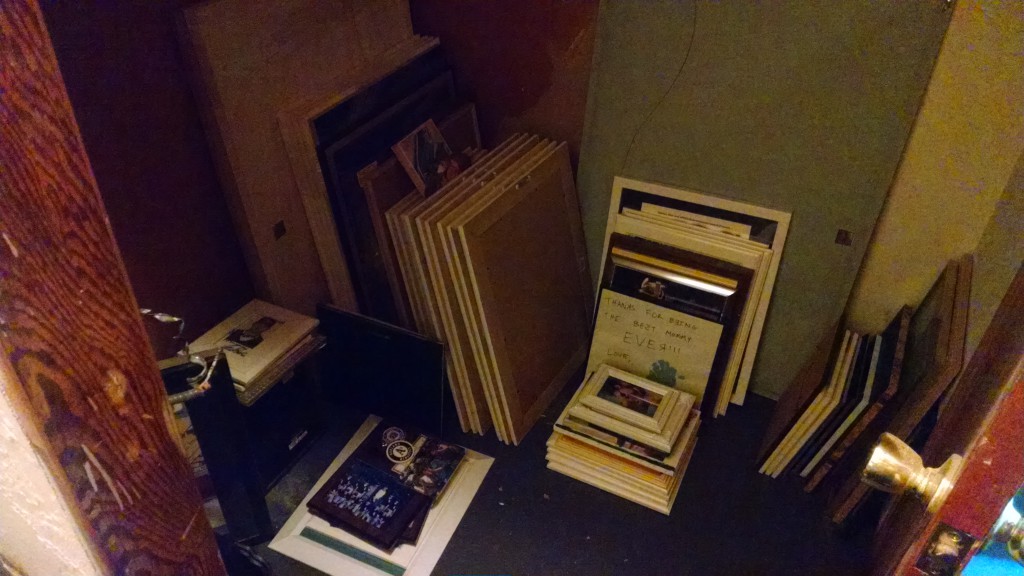 …and a rebate check. It still sucks having spent almost $14k total (furnace and materials for the new water heater we’re installing ourselves), but it’s also really nice knowing that we’ve got brand new, working systems in place that will last us many decades – a cost we have to pay for up front, but will definitely save on as time goes by because they’re much more efficient.