When we first toured the house the floor of the garage was almost 100% covered. Save for the small walk way they left from the door from the kitchen to the washer and dryer that were in here. So we didn’t know the condition of the slab. When they left and the place was ours we saw just how bad of shape it was in. There were cracks everywhere, it was uneven and slanted in certain parts 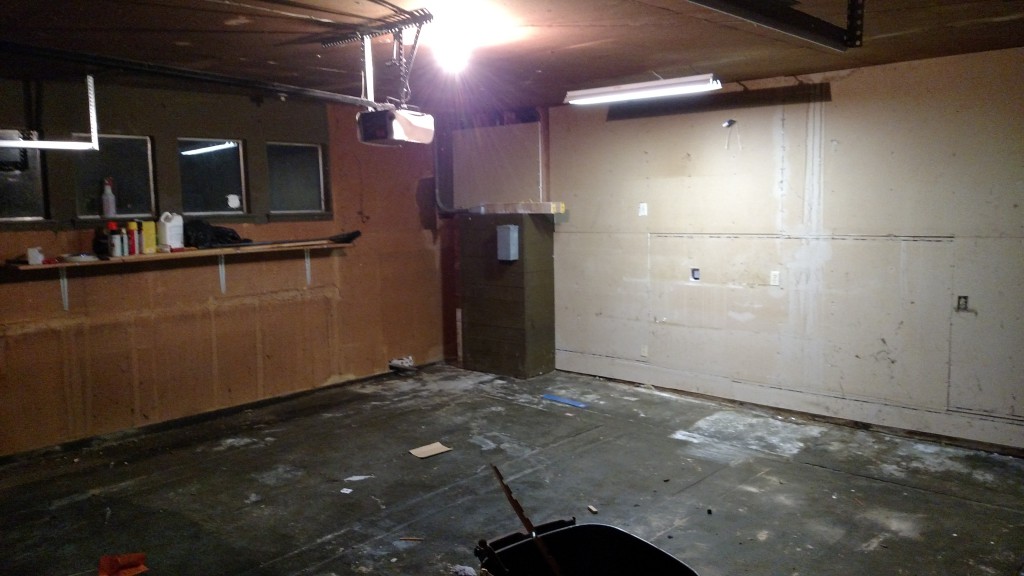 If we were just using the garage for storage, it would have mostly been an aesthetics issue. But this will be the workshop where we have the miter saw, table saw, work table, etc. all set up. So a flat and level slab is a necessity.

It was a bummer to realize we had to fork up a chunk of change to redo the slab, but we needed to. We got two quotes. Usually we get 3 whenever we hire out, but this time we were on a bit of a time crunch, so we only went with two. The first one came in over $5k, and the second was over $6k. Ughhhh. This price wasn’t terrible. Just really tough to swallow. The work was: demo the existing slab, haul it out, lay all the necessary rebar and other prep work and then pour and finish the slab. Things are almost 100% of the time more expensive in CA, and especially in the Bay Area just because the cost of living here. And, the real estate market is currently still insane, so contractors can afford to charge a little more because they can pick and choose their work. When the market eventually tanks (which is inevitable in a couple/few years), contractors will lower their price again because there won’t be as much work to go around.

We asked the contractor who gave us the lower bid if there was anything he could do to bring the price down. Chris got him down to about $4600. Of course, we thought about DIYing ourselves. So we priced that out too. Chris ran all the numbers and figured out that for us to do all the work ourselves it would cost about $3800 (materials to buy, tools to rent, etc.) It would also take us much longer because it would be worst case scenario just Chris, and best case scenario maybe 3 or 4 people that Chris would direct. We ultimately decided that because time was of the essence and we wouldn’t be saving a TON (off the total project cost – doing it ourselves was only about 80% the cost), that we would hire it out. We had basically just 7 days between getting the keys and when we moved in, so it really needed to be done. Chris needed a place to move all his tools into and we needed a place to be able to not only find tools to work on the house, but find tools to operate our business.

So we bit the bullet and paid $4600 for a new concrete slab. They came in the Friday before we moved when Chris was at the house working on other things. They had a skid steer and ripped the shit out of that concrete pretty quickly 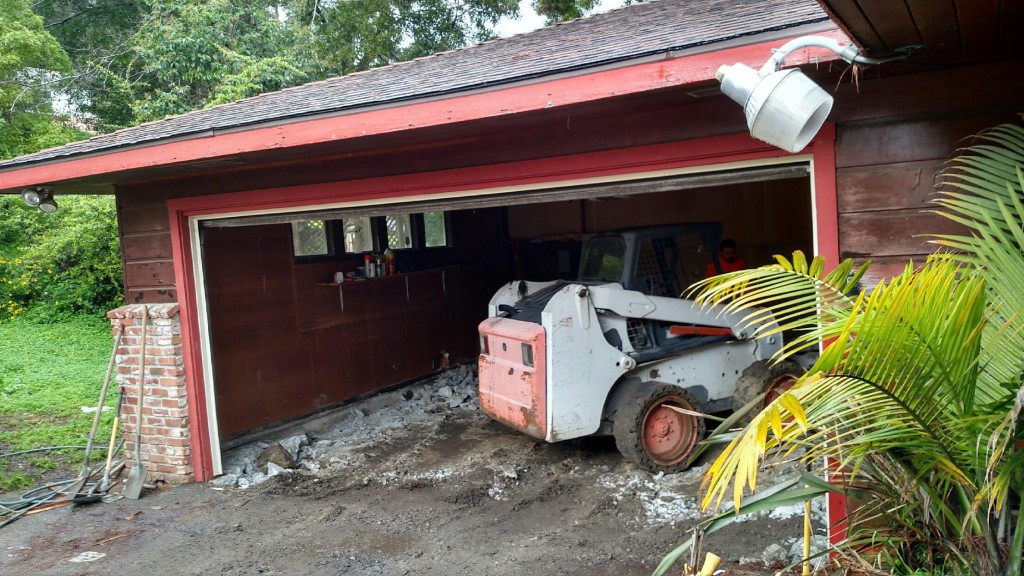 Chris loved getting to watch the process 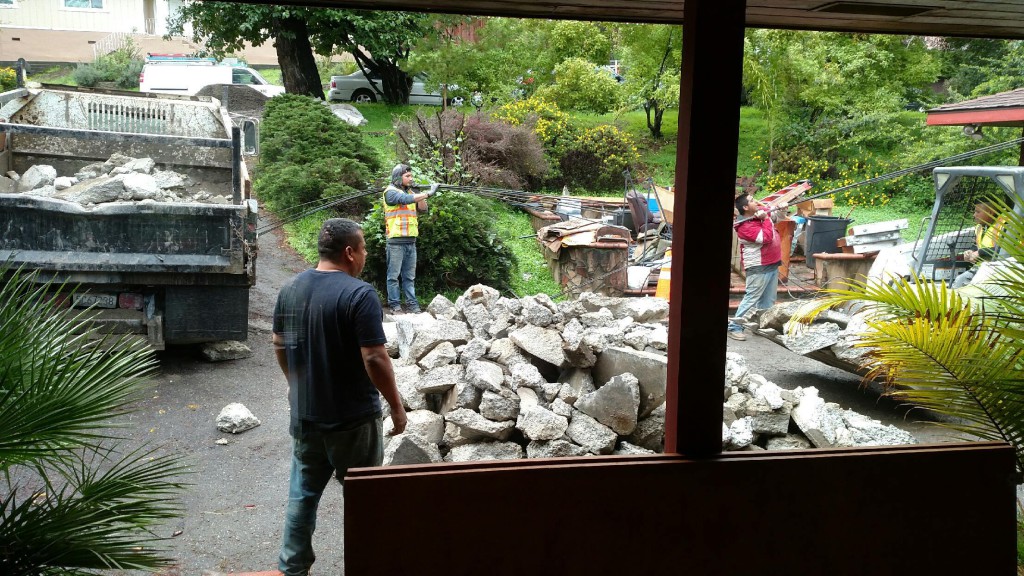 Once the concrete was out they got things all cleaned up and prepped the space for the pour. The rebar was put in and things looked good. The next day was Saturday and I took the girls to Costco in the morning. We’d be moving in that Monday and we wanted to stock up on necessities that we had been low on. I came by to drop things off just as the guys were finishing off the pour. Perfect timing, because that meant we all got to put a handprint in the concrete 🙂 Zoe thought this was absolutely fabulous 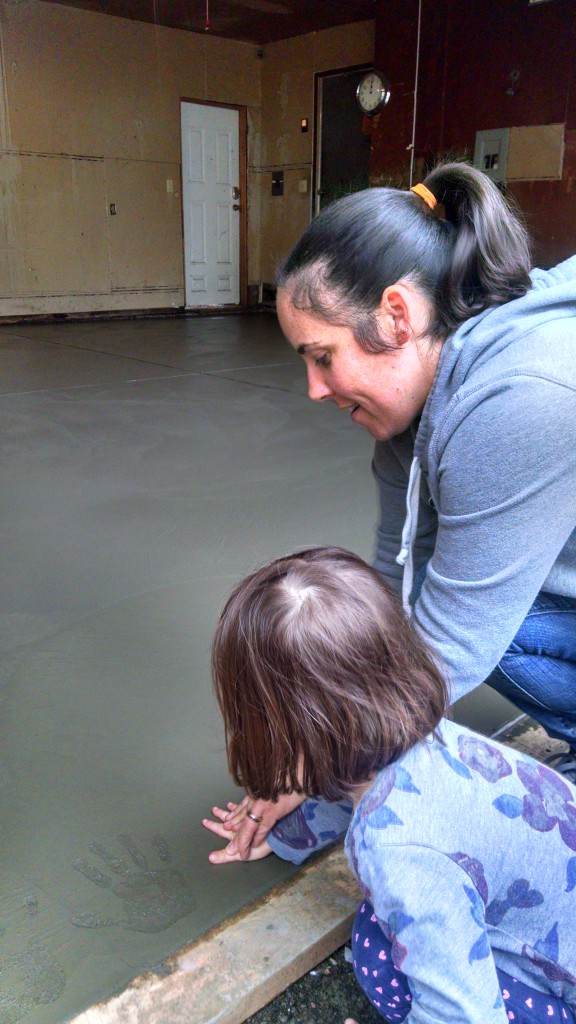 Merritt had no idea what was going on 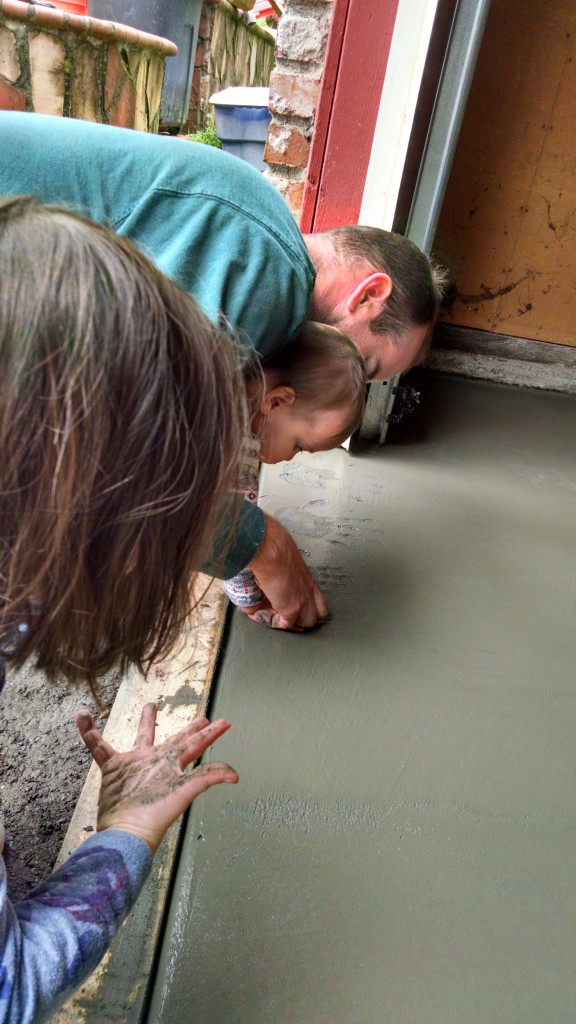 And then, there were all of our hands at our new house 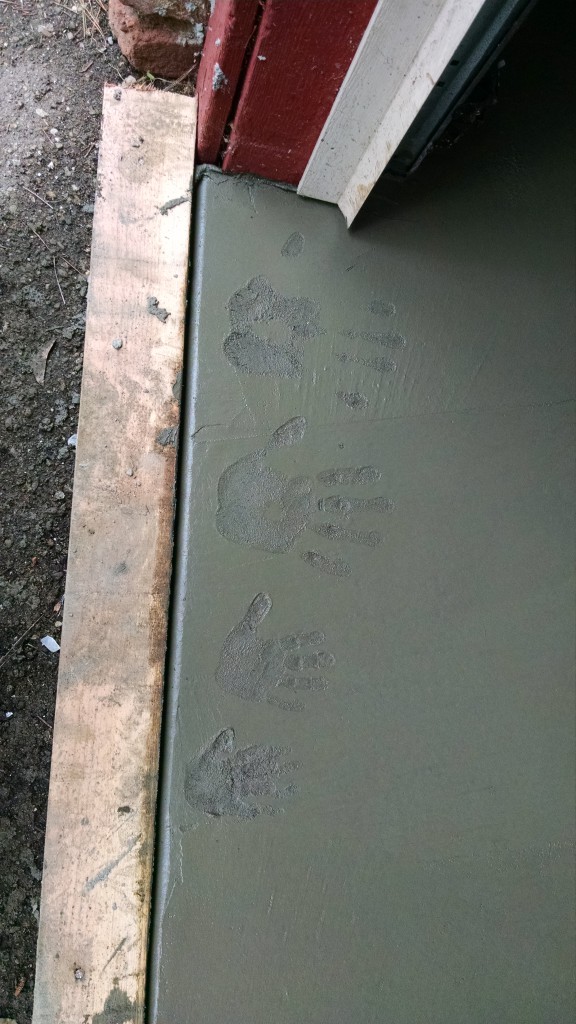 I loved it. Our slab was officially complete 🙂

But it didn’t stop there. We decided that we should rip all the drywall off and put up plywood. Why? Well, 2 reasons: for shear strength and to make it easier to build all the storage that will live in here. Once all the drywall would be ripped down we could much more easily run all of our electrical lines for the shit ton of outlets we want. And then we will install sheets of plywood as our walls (like we did at the Picardy house). Plywood provides great shear strength, and in earthquake country that’s a good thing to give some help to.

Naturally we made family help us 🙂

My step dad has been coming over pretty frequently to help out with Zoe watching or house working during the week. The guy has finally decided it’s time to take his work life easier (he has been a lawyer for over 40 years), so now instead of being at the office on a Friday I make him come to our house sometimes 🙂 The good news is that he actually likes it 🙂 We made him rip off all the drywall from the walls 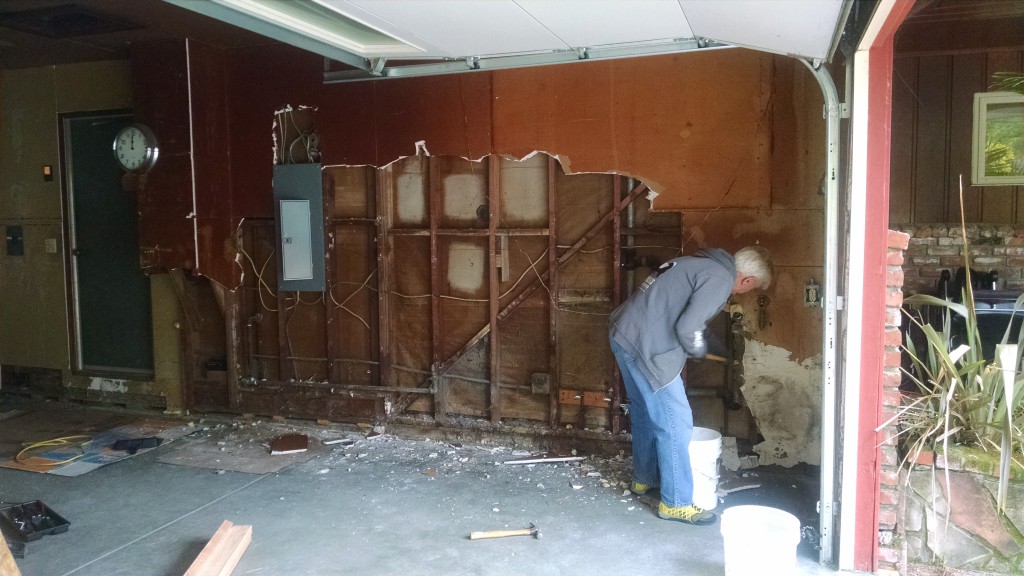 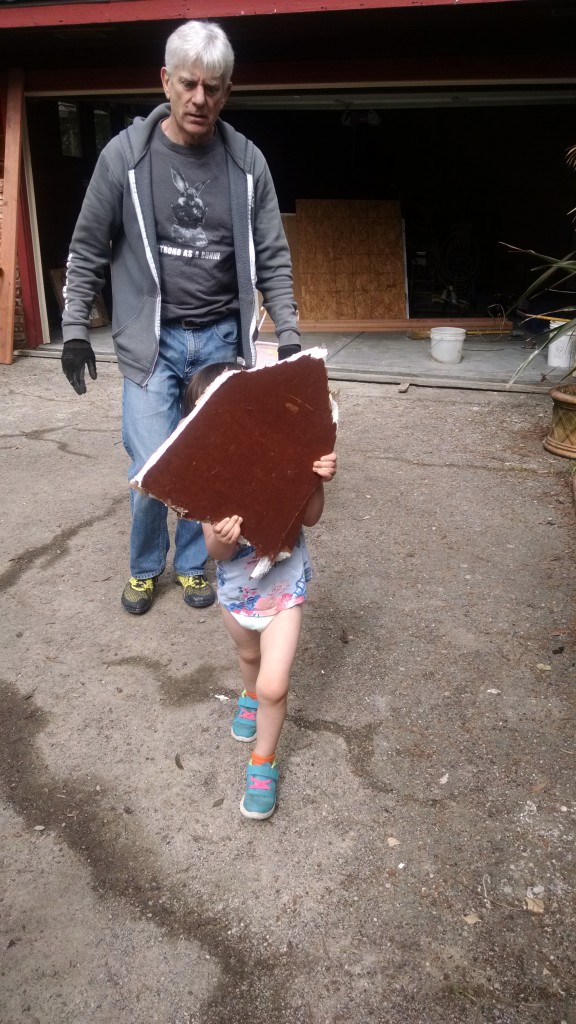 Nothing like a kid in a diaper hauling away drywall to a dumpster. That girl melts my heart 🙂

After 2 days the drywall was all ripped down 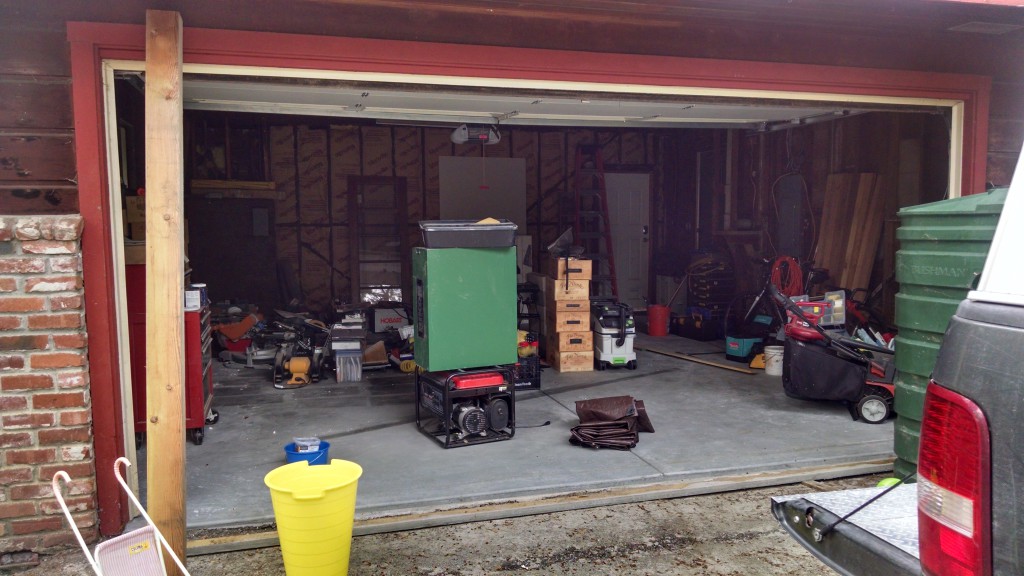 We’re almost at the point where Chris can seal the floor. He’s going to paint it with an epoxy paint, but he needs to let the concrete cure for the full 30 days. Once the epoxy goes down he can work on the electrical and we can hang all the plywood. Then we can get to setting up the workshop. Something Chris is pretty excited for.