Renovating a house is sort of like having a baby. Just in the same way I’ve always thought having a cat prepares you for a dog and having a dog prepares you for a kid. Naturally Chris and I just skipped those steps all together and went straight for the kid 🙂 But there are some strange similarities between working on a house and working on raising a baby… 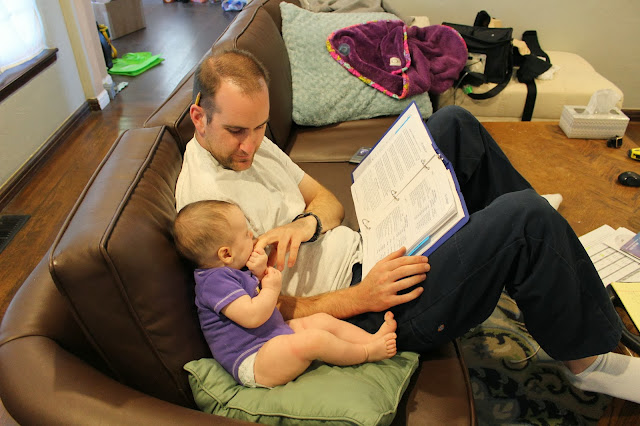 1. You become that person.

And it’s only gotten worse. With the house I would just want to talk about it all the time. “What? You want to know what project we’re working on? Oh, let me tell you all about it, including all the materials which you probably don’t care about at all about but I’m going to tell you all about anyway.” Now, with a baby I’ll tell you all about her AND (do the dreaded) whip out my phone and show you pictures. I know, I’m so obnoxious. I make myself feel better because I preface it with, “I know I’m really annoying, but want to see pictures?” As if they could ever say no, right? 😉

2. It’s always way harder than you thought it was going to be.

We completely (well, me at least) had rose colored glasses when it came to starting the whole renovating process. Chris was really handy and had built things in the past and I grew up helping my dad with projects around the house. How much harder could renovating be? Uh, 47 times harder. Whoever knew it would involve throwing tools? The same thing happened with having a baby. I like to think Chris and I are fairly intelligent people, but who knew a nearly 4 month old could outsmart you? Little stinker. I think having a baby is about 68 times harder than you thought it would be

3. Oh yeah, and they cost a million times more too

What’s that statistic? It costs 29 million dollars to raise a kid? No, of course not that much, but it does cost a lot. You think, “Oh, she doesn’t need all those toys, what a waste of money, [x] amount will be plenty.” And then pretty soon you have 17 million toys and you’ve spent 17 million dollars. Chris and I are so far pretty good about keeping the costs under control and really only buying things we feel are necessary. But already, phew Zoe, you’re expensive. In the same way every renovation project ends up costing about 3 times more than you thought. Even when you know it will and try to accommodate that, why is it always more expensive? Have you ever done a project that was less expensive than you thought? No, it’s impossible.

4. You’re a masochist because you’d do it again.

We’re totally not there yet with even the possibility of baby #2, but it’s amazing because when you’re pregnant with baby #1 people ask you when you’re going to have baby #2. “Ummm, there is still a shrimp in my stomach, it’s not even a human yet, please leave me alone,” should have been my response. But most people do it again. We all must forget about the crazy times (like wonderful Zoe waking up about every 90 minutes last night). Chris and I aren’t done with baby house #1 yet and we’ve always been excited about the prospects of baby house #2. What is it with babies and houses? Forget the ridiculous crying and asbestos floor tile, let’s put ourselves through hell again and love it!

5. It takes a while to figure out whose role is what.

Just like I talked about last week, it takes a while to figure out what your role is in both cases – who takes the lead when framing and who takes the lead with fussiness? Chris and I are both people who like to take charge, and while Chris is quiet about it and I’m loud about it, it definitely took some time (ie, a year or two) to figure out who was the boss on certain tasks when it came to renovating. Now I think we’ve got a really good system down that results in a lot less fights 🙂 It’s the same adventure with raising Zoe. For example: I’m a lot better with her fussiness in the morning because I’m an early riser so I just pop right up with her, and Chris is much better at tackling the fussies in the evening because he’s a night person. Each new challenge along the way teaches us a lot.
6. You’re embarrassed by all the of the shit it accumulates.
And you PROMISE yourself that you will not accumulate said shit, but you do. There has been drywall propped up against the wall/large window in the front room for about a year. With all the accompanying drywall dust. Sure, it’s embarrassing and I should probably sweep it up, but Zoe can’t crawl yet so I could really give a shit. And that activity mat of hers? It’s permanently planted in front of the coffee table. Of course it is really annoying to walk around whenever we’re in the room ever, but if we move it about 6 inches to the left it makes things a little easier. Move it out of the way all together? Yeah, right.

7. It’s easy to let it take over your life

This one is so important for me to NOT let it happen. A lot of times Chris and I have gotten so busy and focused with the work of renovating our house over the last 4 1/2 years that we miss out on events with family and friends or we never take time for ourselves to just hang out. A year or two ago we really buckled down to give ourselves some more time outside of renovating so that we didn’t go insane. And the same completely goes for raising a baby. Zoe is amazingly wonderful, special and just about the best thing ever, but it’s also really important to remember that we were our own people before we had her. We have to feed ourselves in order to feed Zoe. It will make for happier parents and a happier baby.

What about you? How is renovating your house like raising your kids?