Chris had some extra vacation time so he took time off yesterday and we had hoped to get the rest of the paver cuts done and maybe even lay some more sections down. The weather has sucked the last few days, but it kept going back and forth on whether yesterday would be sunny or rainy or sunny or thunderstorms…we hoped for the best.

First up, adding concrete to the edging 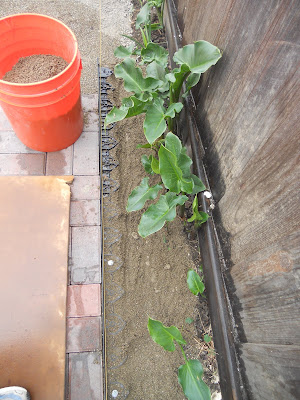 Because the pavers aren’t laid down right next to something that will push up against them and help hold the edging in place, we decided that adding concrete would help the cause. So while Chris scooped it out… 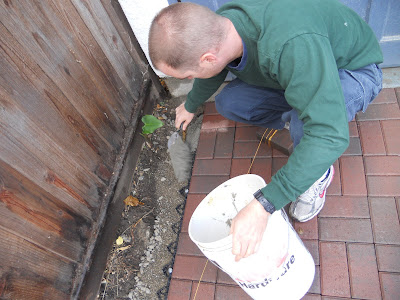 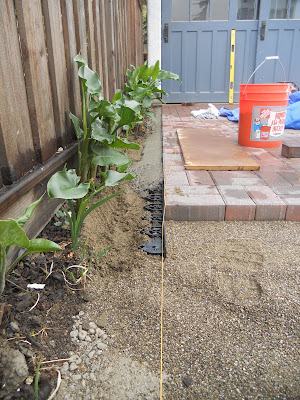 The same got done for this area up against the grass 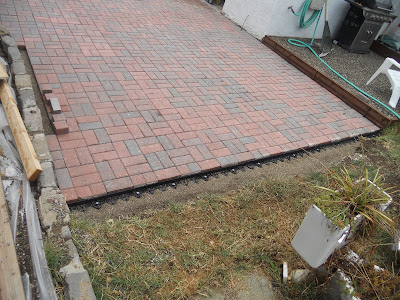 Once that was finished, the sand out front still wasn’t totally dry (and you’re absolutely not supposed to work on it when it’s wet) we decided to work on the cuts around the future second veggie garden 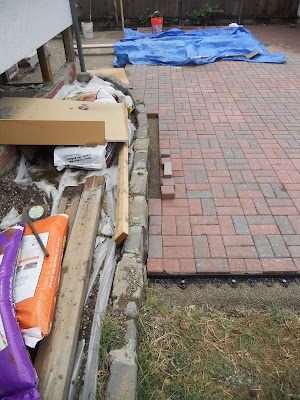 Chris had previously used the brick hammer to make cuts, but because the angles started getting a little crazy (and because it’s not as fast and accurate), we broke out the tile saw to help us.

A lot of cuts were already going to be difficult, but add on that the bottom of the pavers would sometimes have to work around this poor stone work that came jutting out… 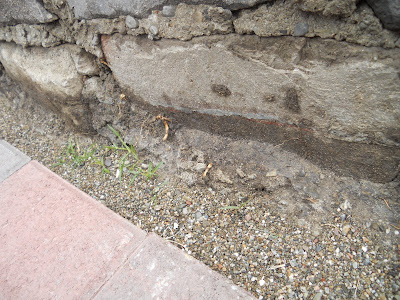 …and we knew we’d be making some interesting cuts.

I hung out at the stone wall, took measurements, drew out cut lines and tried to figure out how the hell to make the pavers fit into place. Once I sort of got that figured out I handed the paver over to Chris to make the cuts 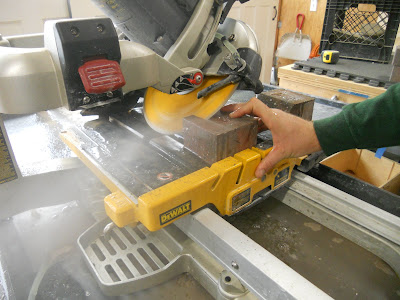 And like I told you, there were some crazy cuts to try and make those pavers fit 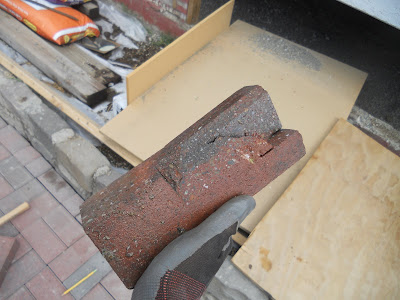 But little by little we made progress. It wasn’t beautiful 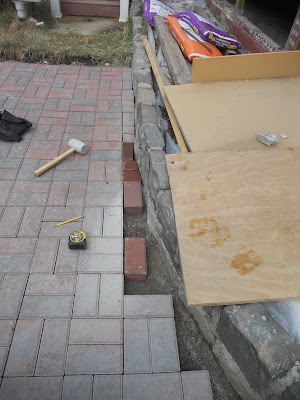 But hey, have you ever tried to cut rounded angles into cement stones? It’s not easy.

As I made my cut marks and the sun was starting to shine, Chris wheeled some sand to the back 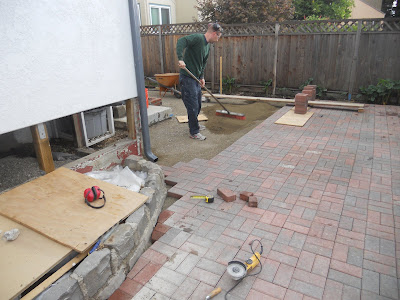 It was still damp, but we figured that if we swept it out a bit, it would help dry it out faster.

But soon, the raindrops started 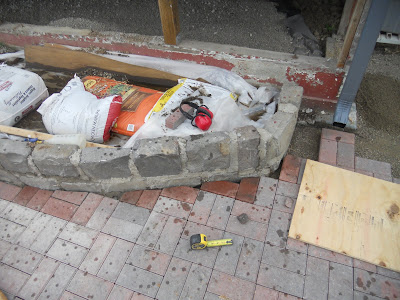 We rushed to cover the edge of the pavers with a tarp and soon, a fucking tropical storm rolled through 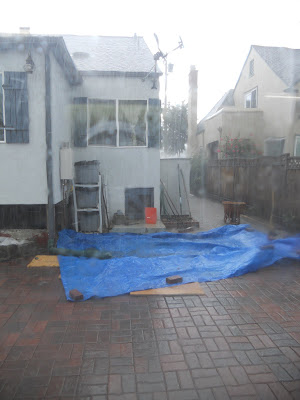 We ran inside (and got completely soaked in the 20 yd. dash). Poor Charlie the Cherry Blossom struggled in the super strong wind 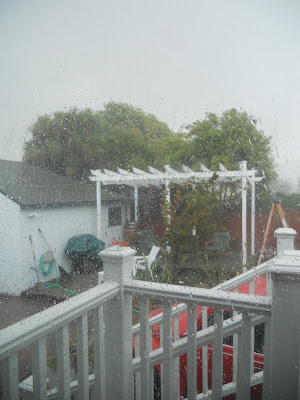 I ran to the TV room to look out the window and see how our (expensive) base sand was holding up. Not well 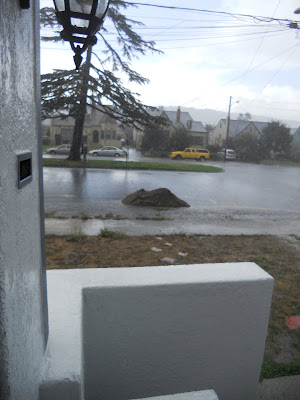 A fucking river was running through the street.

Depressed and upset at the thought that our sand was being washed away, our concrete could get ruined and our pack could get fucked up, we decided it was probably the best time to break for lunch. And after lunch, absolute sunshine 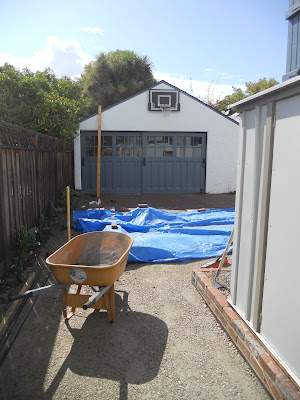 The concrete got washed out a bit 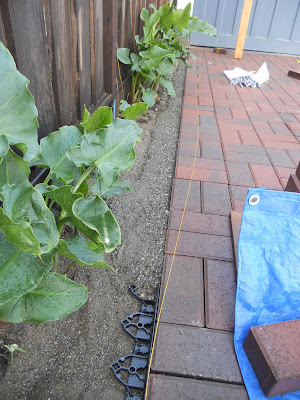 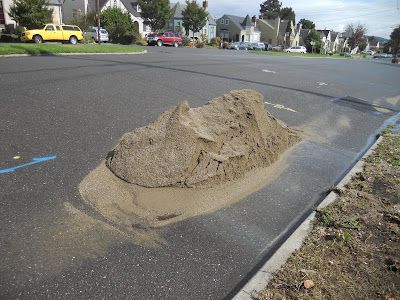 Well, some neighbors may find a sandbox in their driveway 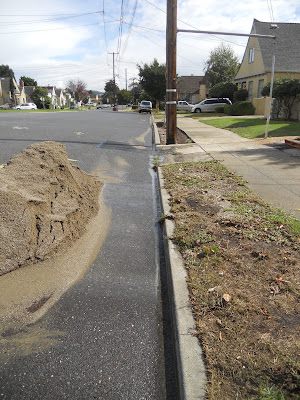 But with the sunshine we decided to try our hand at making the cuts again. And we were making some good progress when the raindrops came again. FUCK! 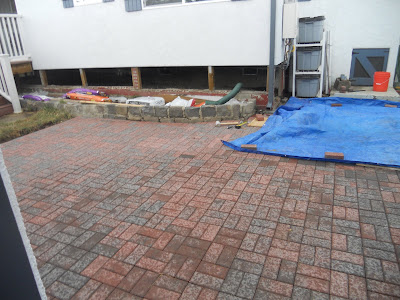 And we were making such good progress! 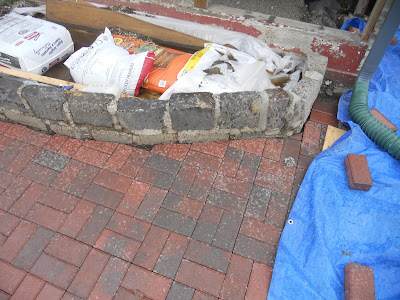 (that little triangle that’s missing will get concrete poured into it because there’s a big rock at the bottom that would make it pretty impossible to put a paver down. 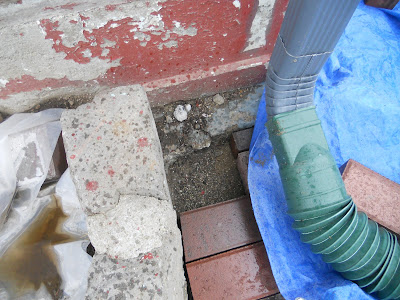 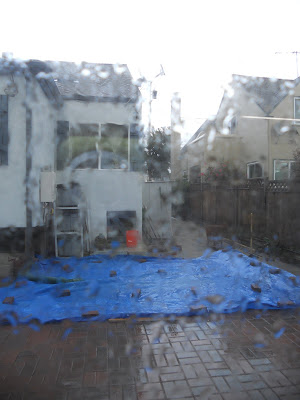 After Tropical Storm Oakland II came through we called it a day. Damnit.

It’s supposed to be sunny skies and low 70s this weekend. I hope that damn weather holds up when we have to get more sand delivered. Damnit.