Let’s cut right to the chase: the fucking floors are DONE! 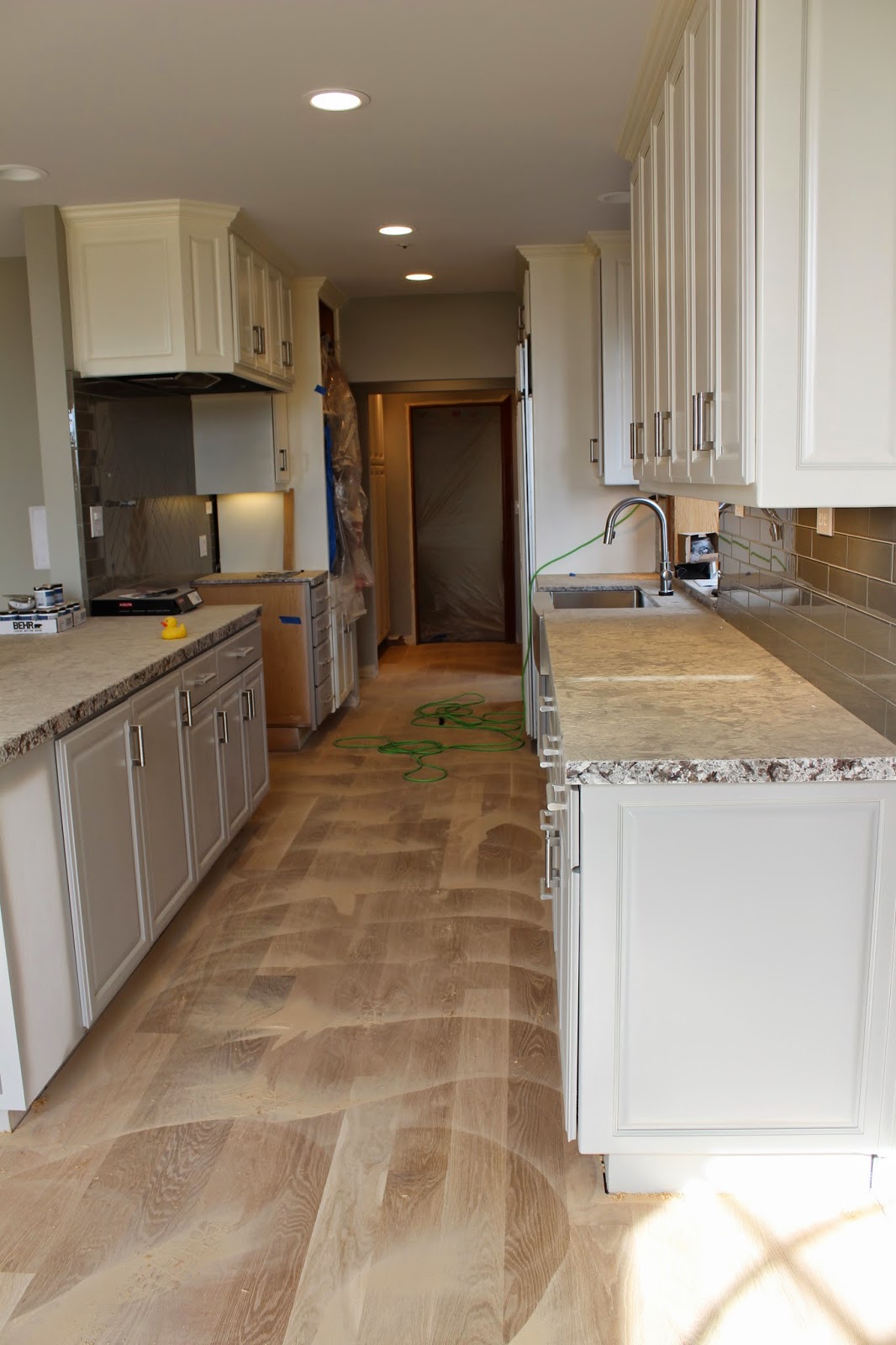 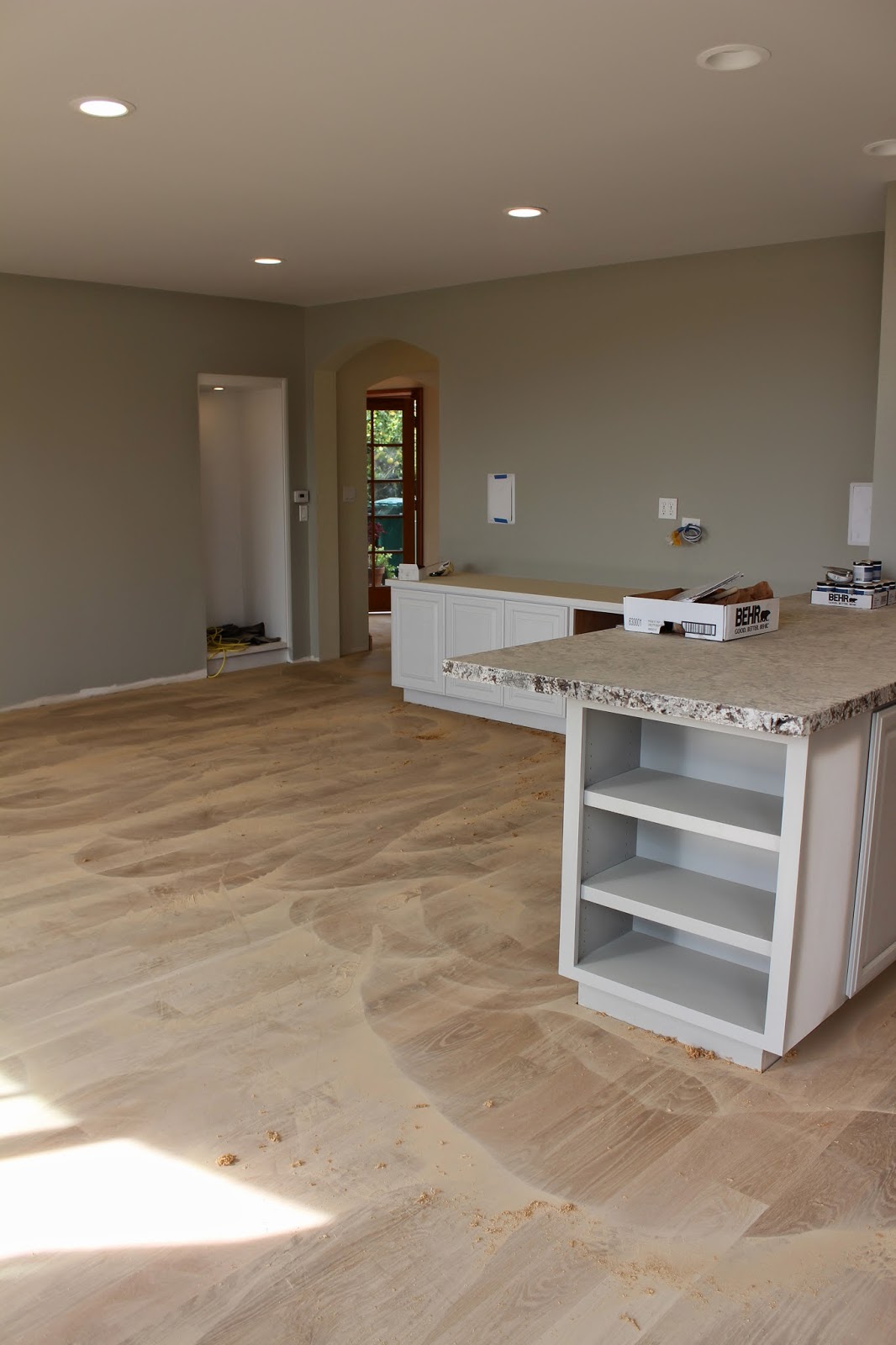 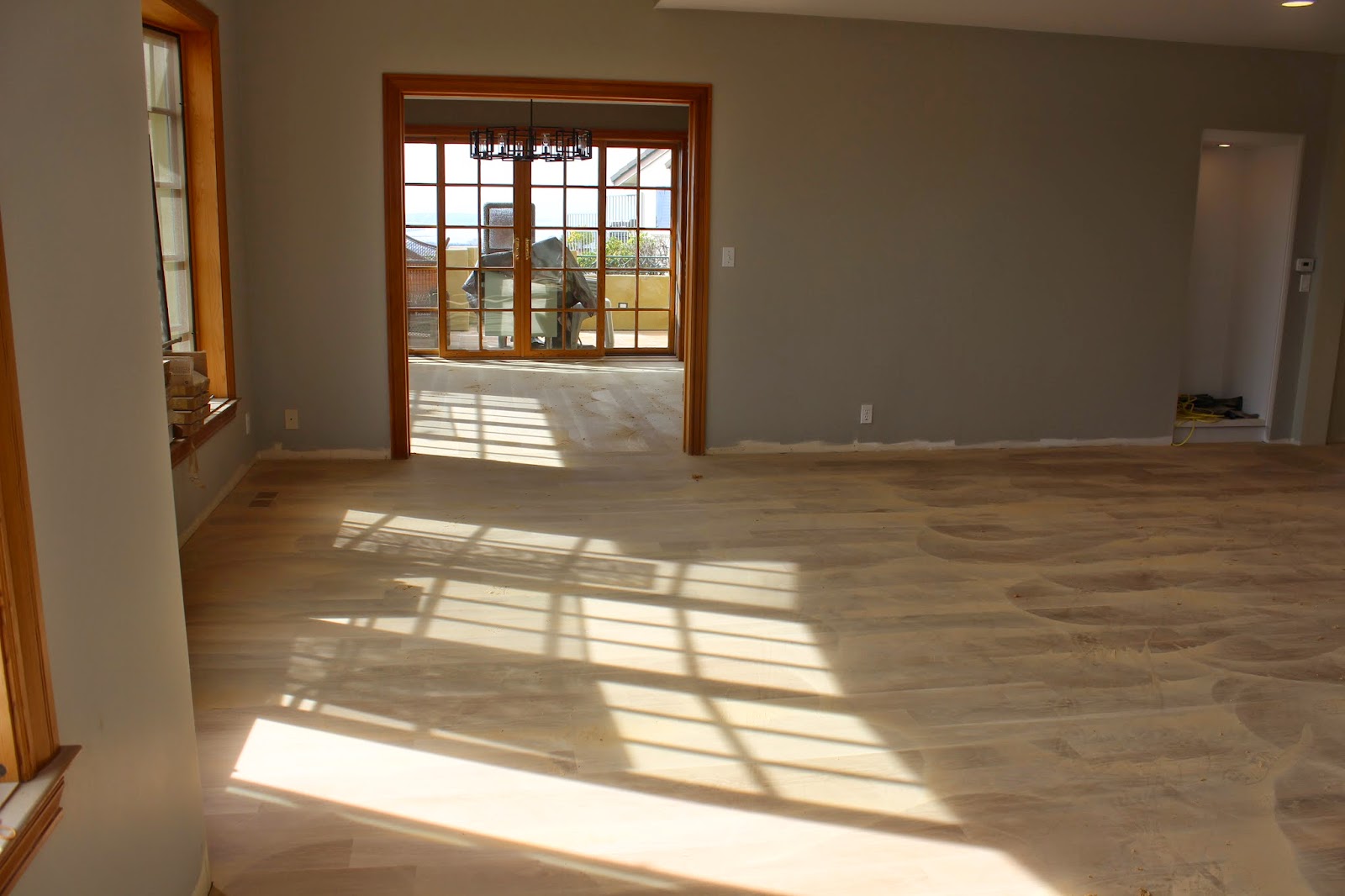 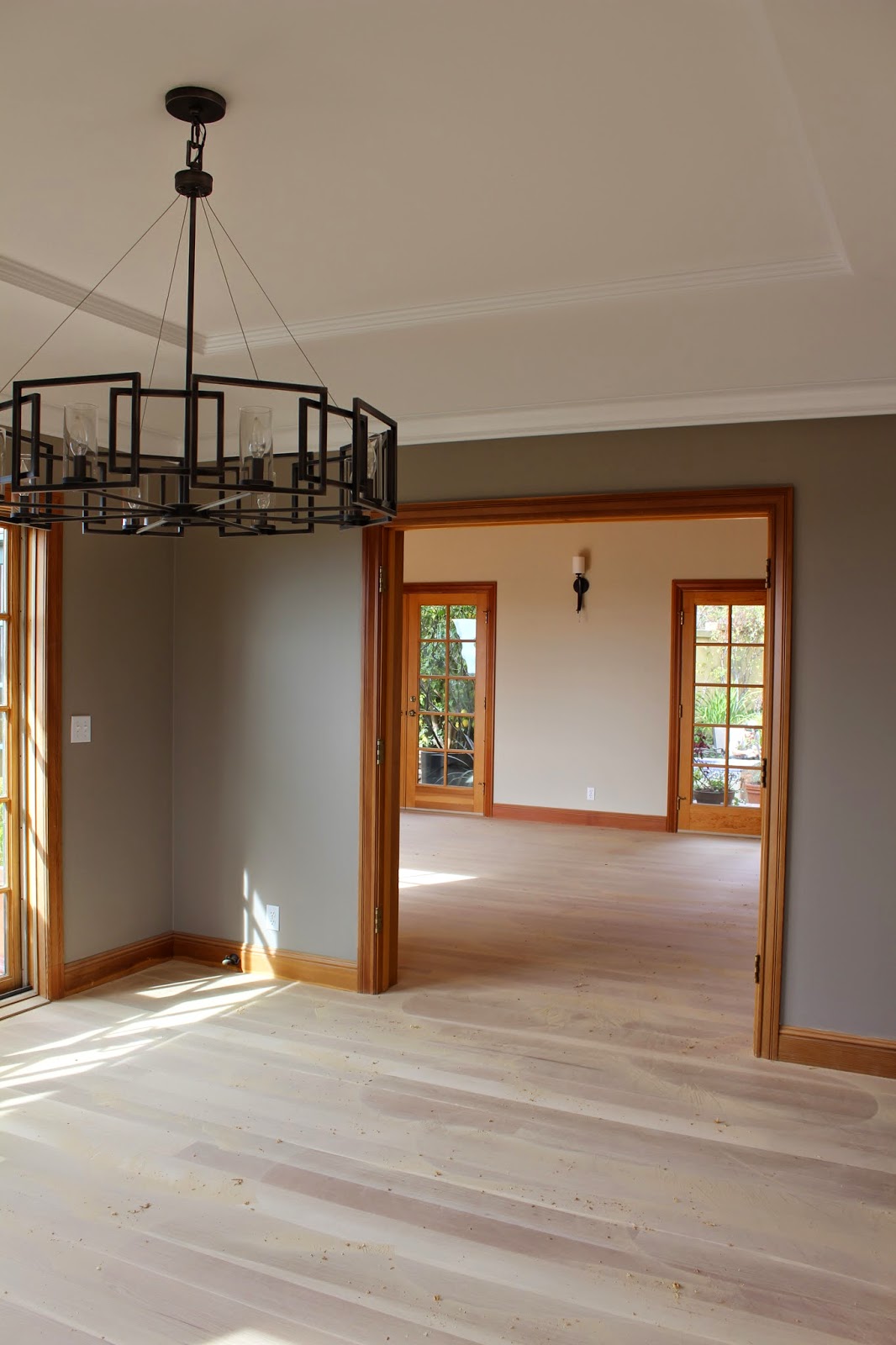 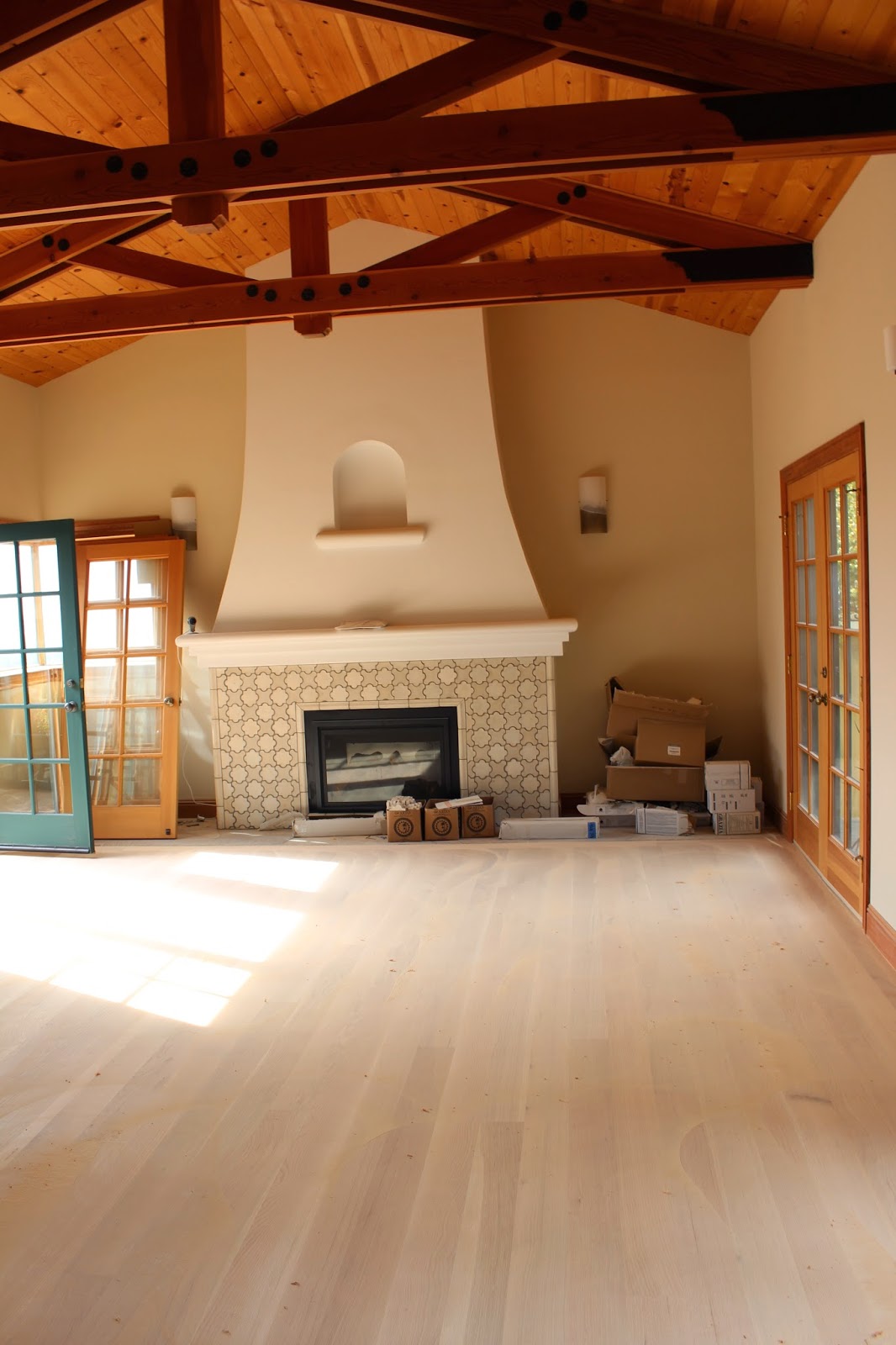 And then through the end of last week, this weekend and Monday they got 3 coats of poly down. We’ve been relatively disappointed by this company (every flooring company we’ve tried – and we’ve tried 3 – has disappointed us) but the floors look pretty good. It’s amazing the difference having the light colored Oak floors in comparison to the awful tile and AWFUL. White. Shag. Carpet. that was there before. Ewwwww 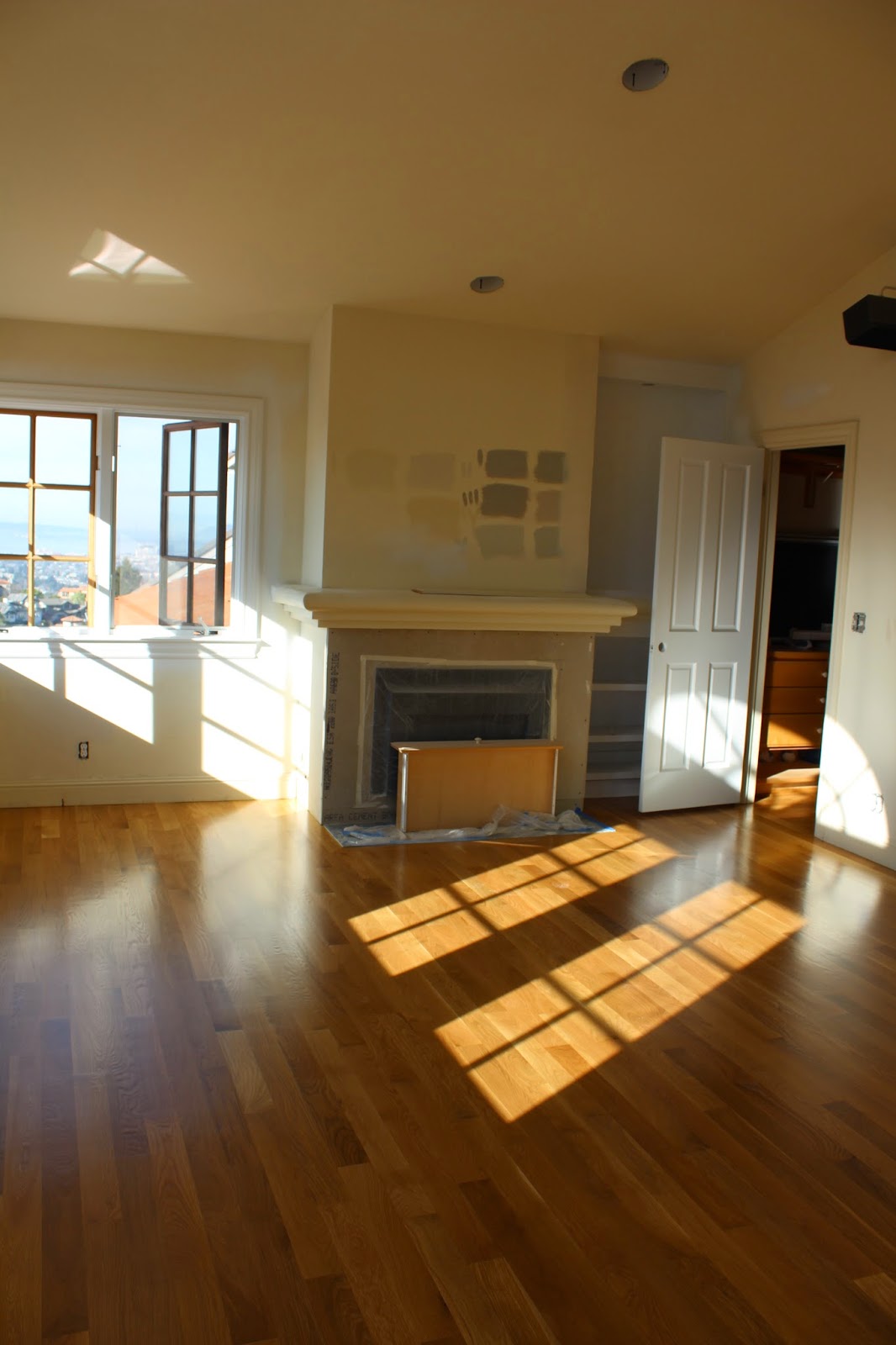 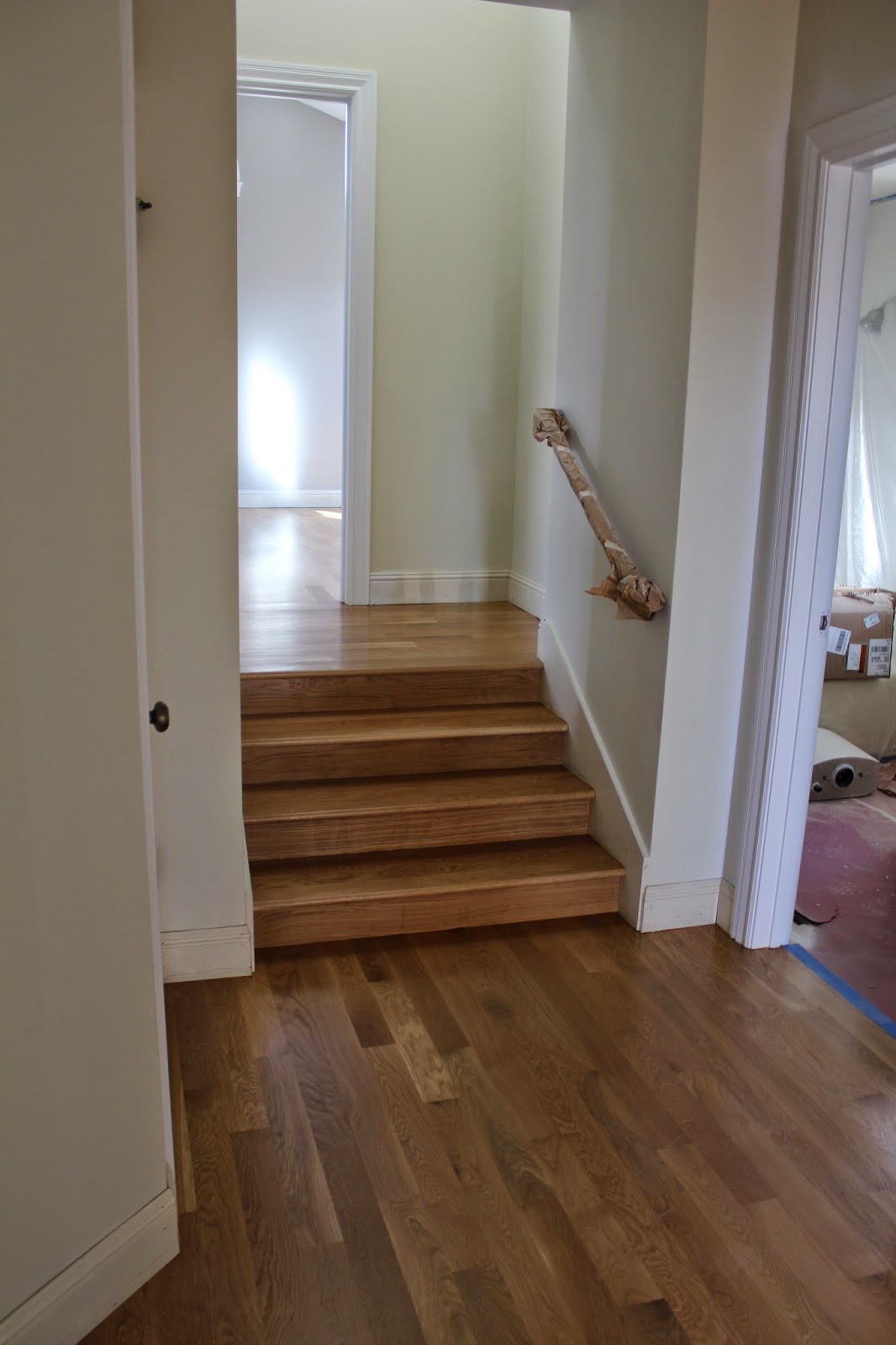 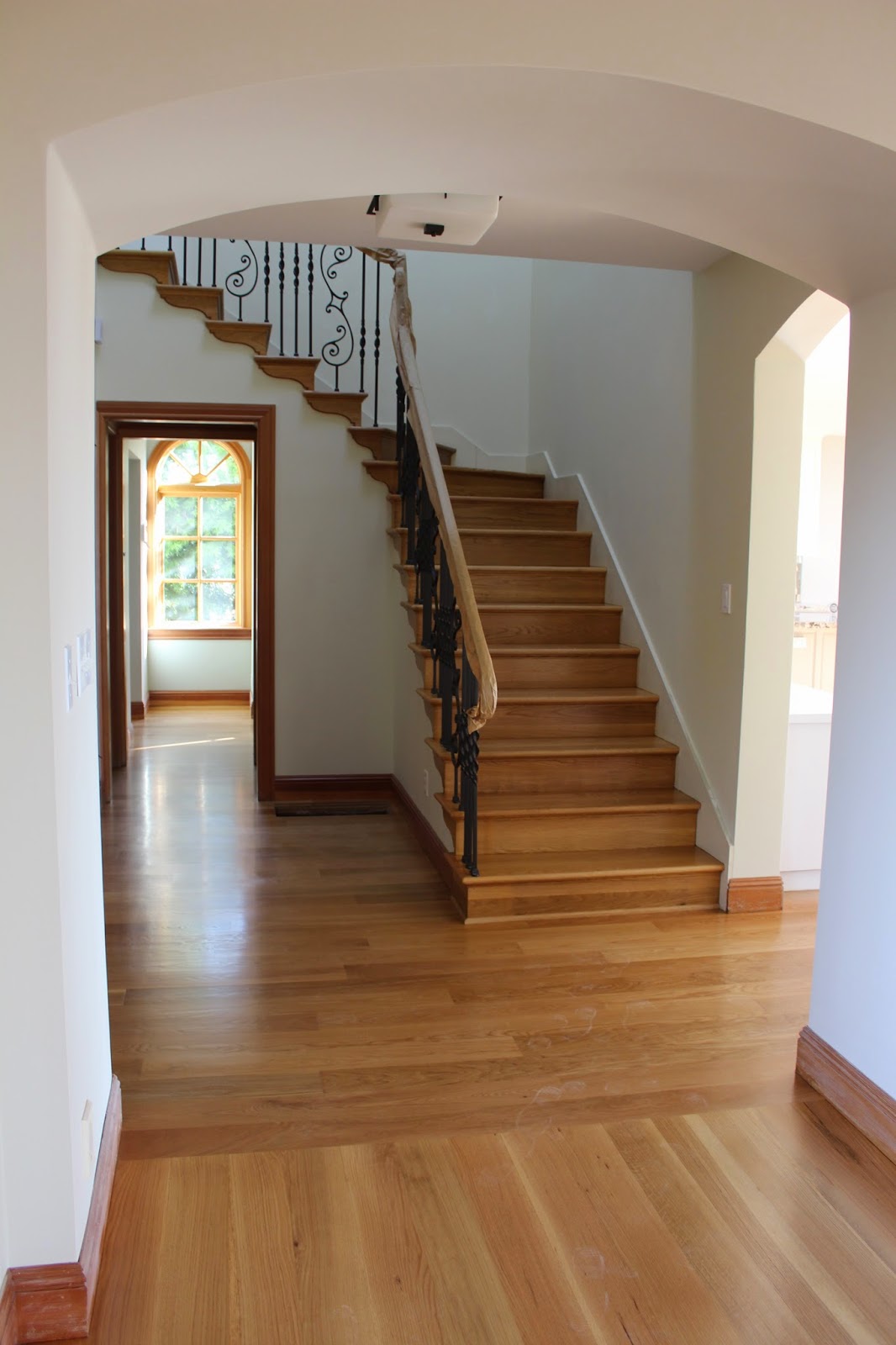 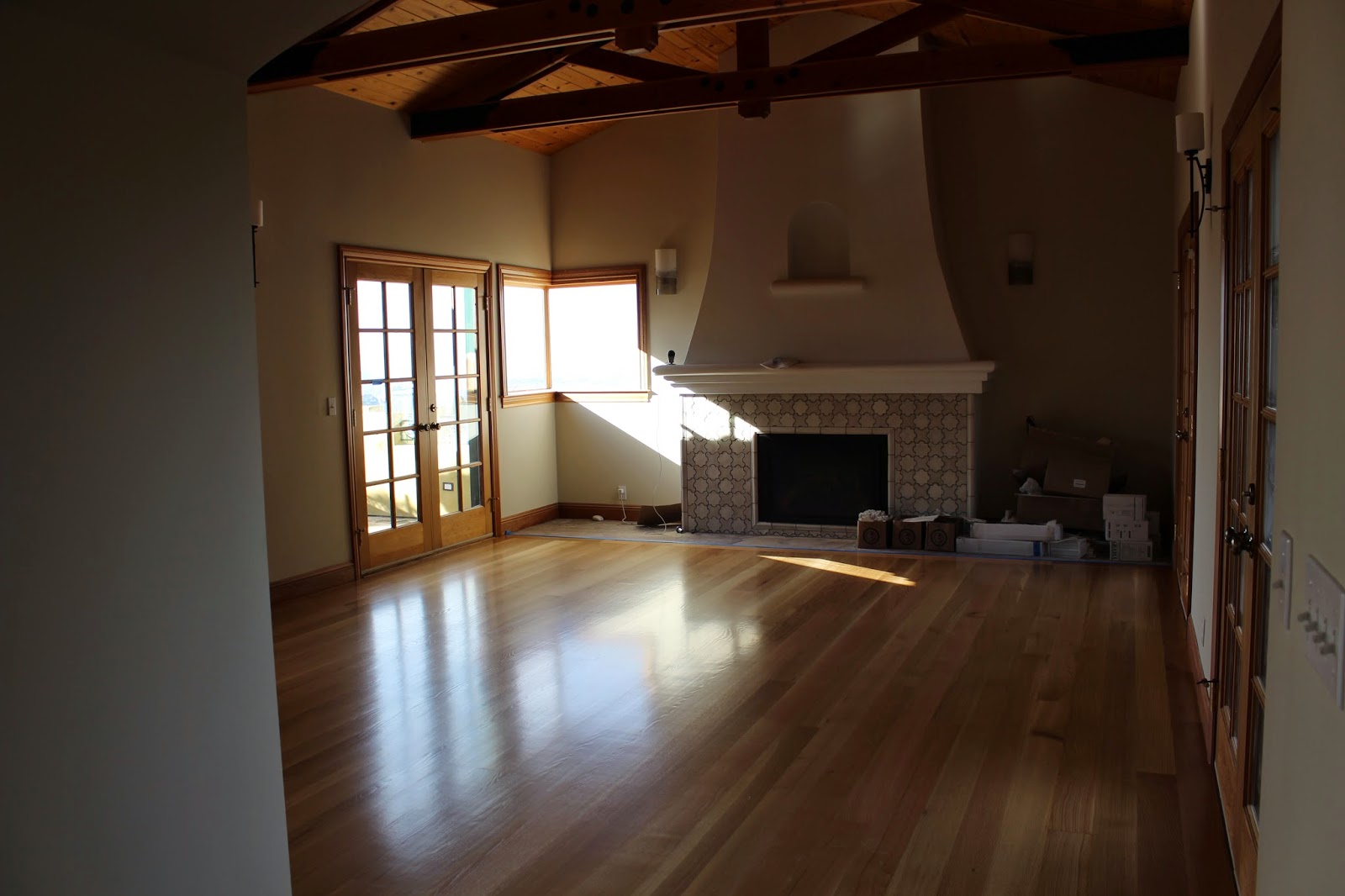 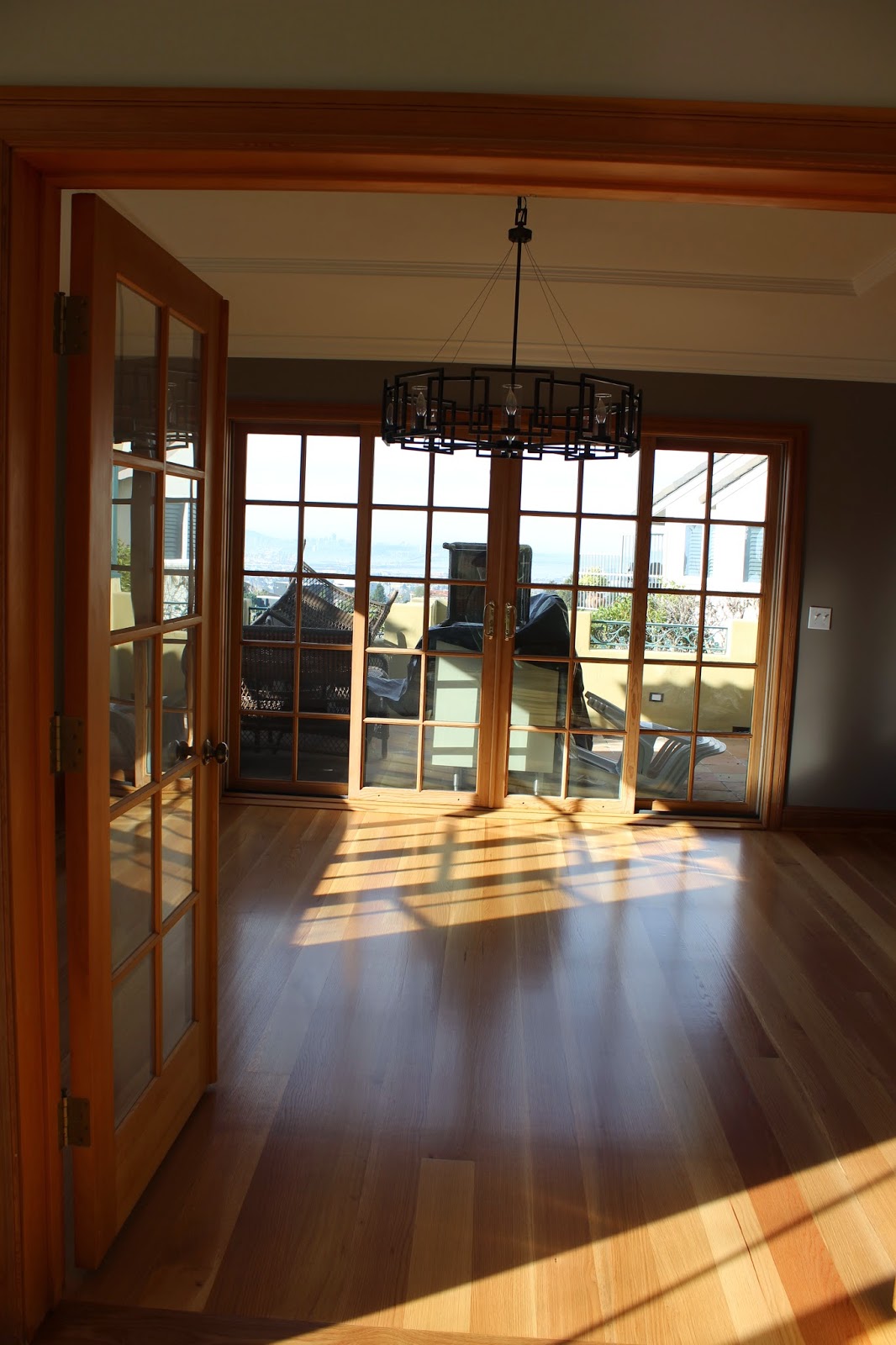 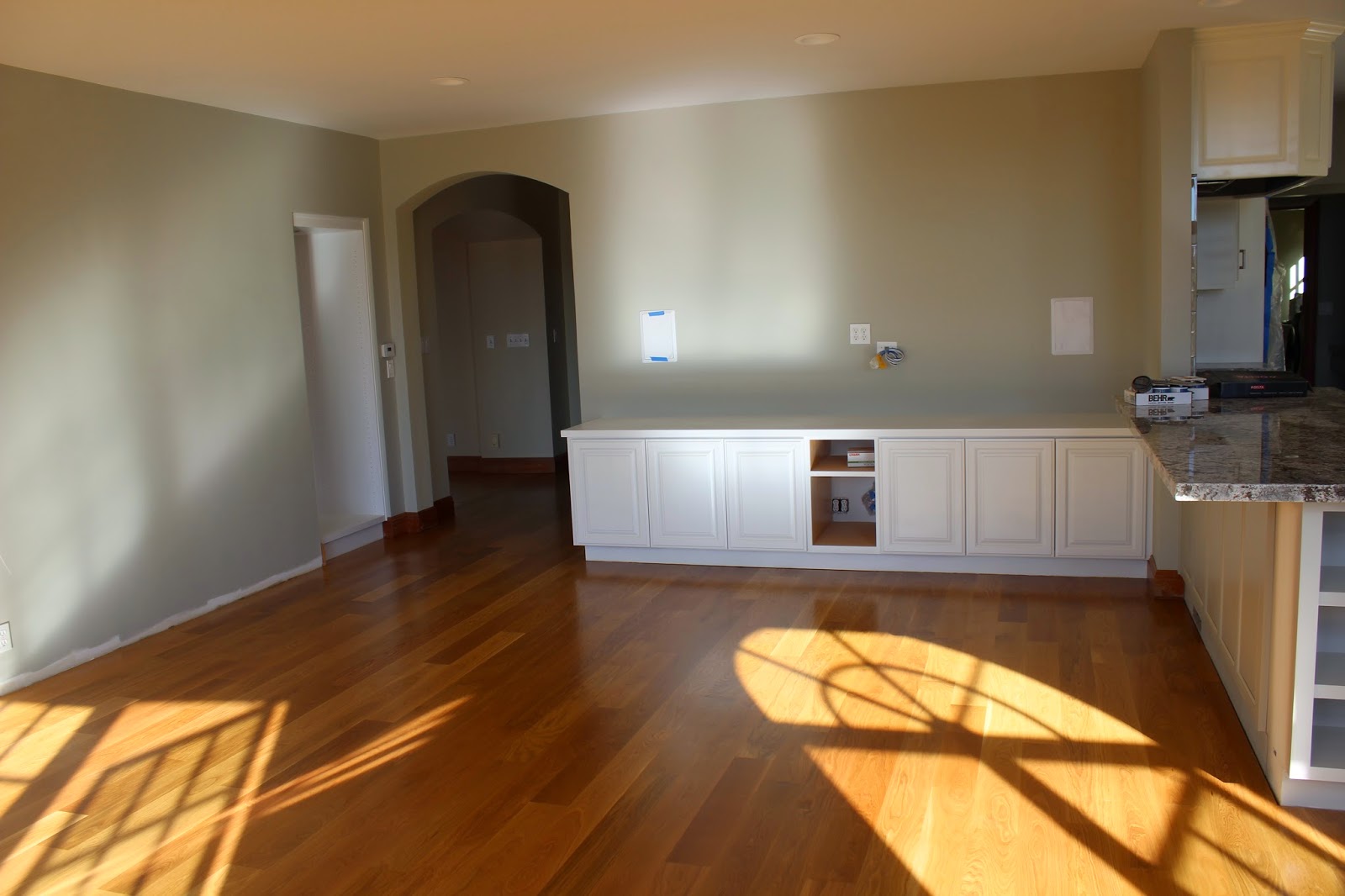 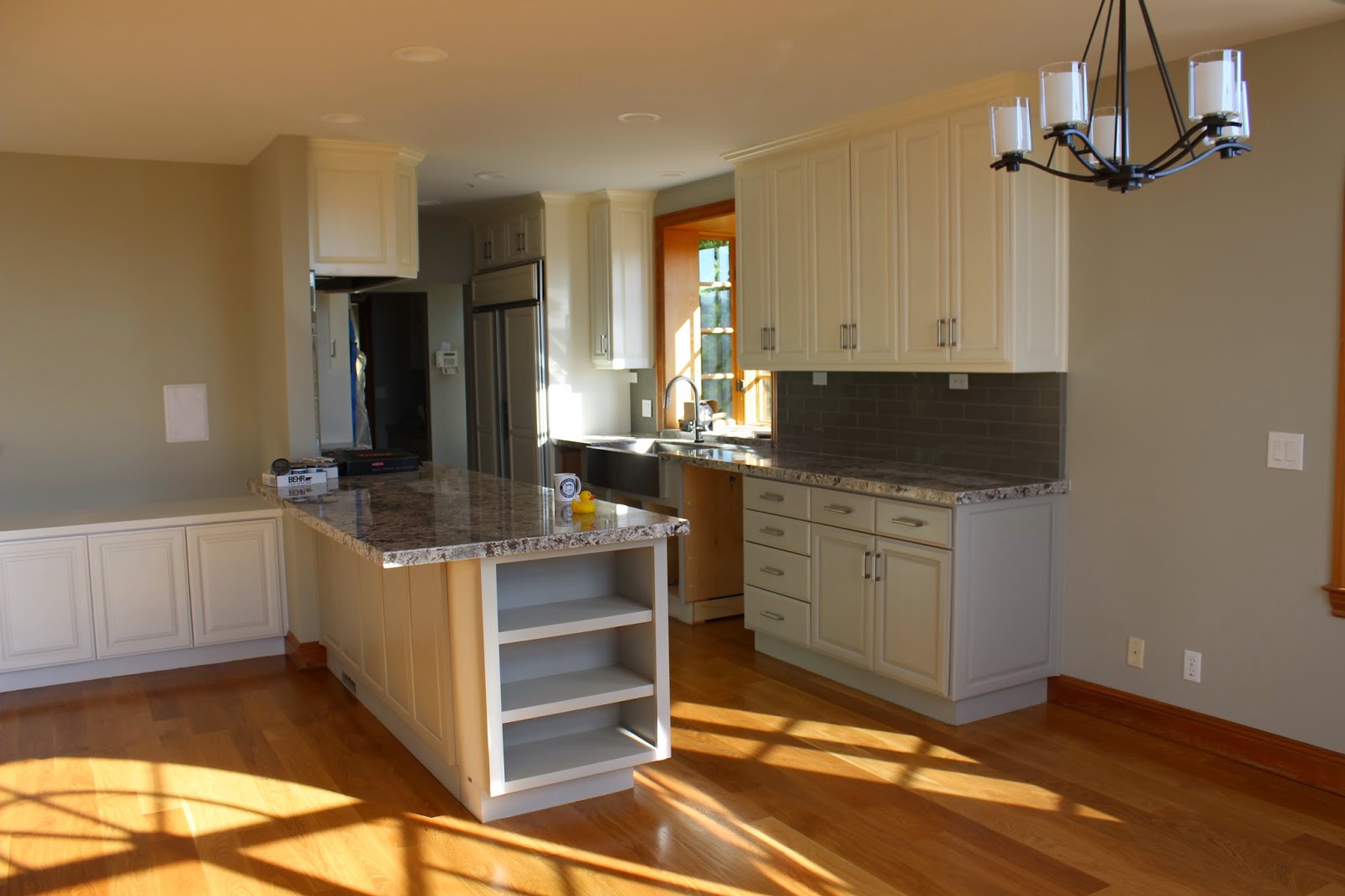 But, it seems like flooring contractors don’t really give a shit. I don’t know what it is. Whenever we work on other people’s houses we are SO CAREFUL not to ding things, knick them, whack into stuff – you’re there to FIX something, not give a homeowner another item on their to do list. Case in point, allllllllll the dings alllllll over alllllll the walls

I only took this one pic, but EVERY. SINGLE. ROOM has knicks, gashes, scuff marks. It’s awful. The painter of course will touch up after the floors are done, but the amount of markings and shit all over the walls that these guys left will go over any painter’s standard “touch up” line item. And that’s fair for the painter. He literally has to repaint a wall or two in a couple rooms and he should get to charge a fair rate for that because that work was done and another trade just didn’t give a shit. “Traditionally” floors are done last. But, honestly, in my experience, from now on, I think I’ll suggest to homeowners to redo floors FIRST (and them put ram board down to protect them). Plumbers are famous for cutting the shit out of floor joists to make their plumbing job go more easily (instead of rerouting things a little in order to maintain the strength and stability of floor joists). Similarly it seems like flooring contractors just have no real care in the world for keeping a clean – and damage free – work space. And this company was well referred in the area and been in business for a long time – so we weren’t just going on the cheap. But the smears, gashes in the wall, scuff marks everywhere, it’s just really annoying. I know they are dealing with heavy equipment (and I know, because I’ve done the work myself) but they honestly seem to have no care about being CAREFUL. Of course, markings happen and that is totally understandable, but we have to repaint in SO MANY places because they didn’t care. Like when they spilled wood filler on the brand new fireplace hearth and just didn’t care at all to clean it up 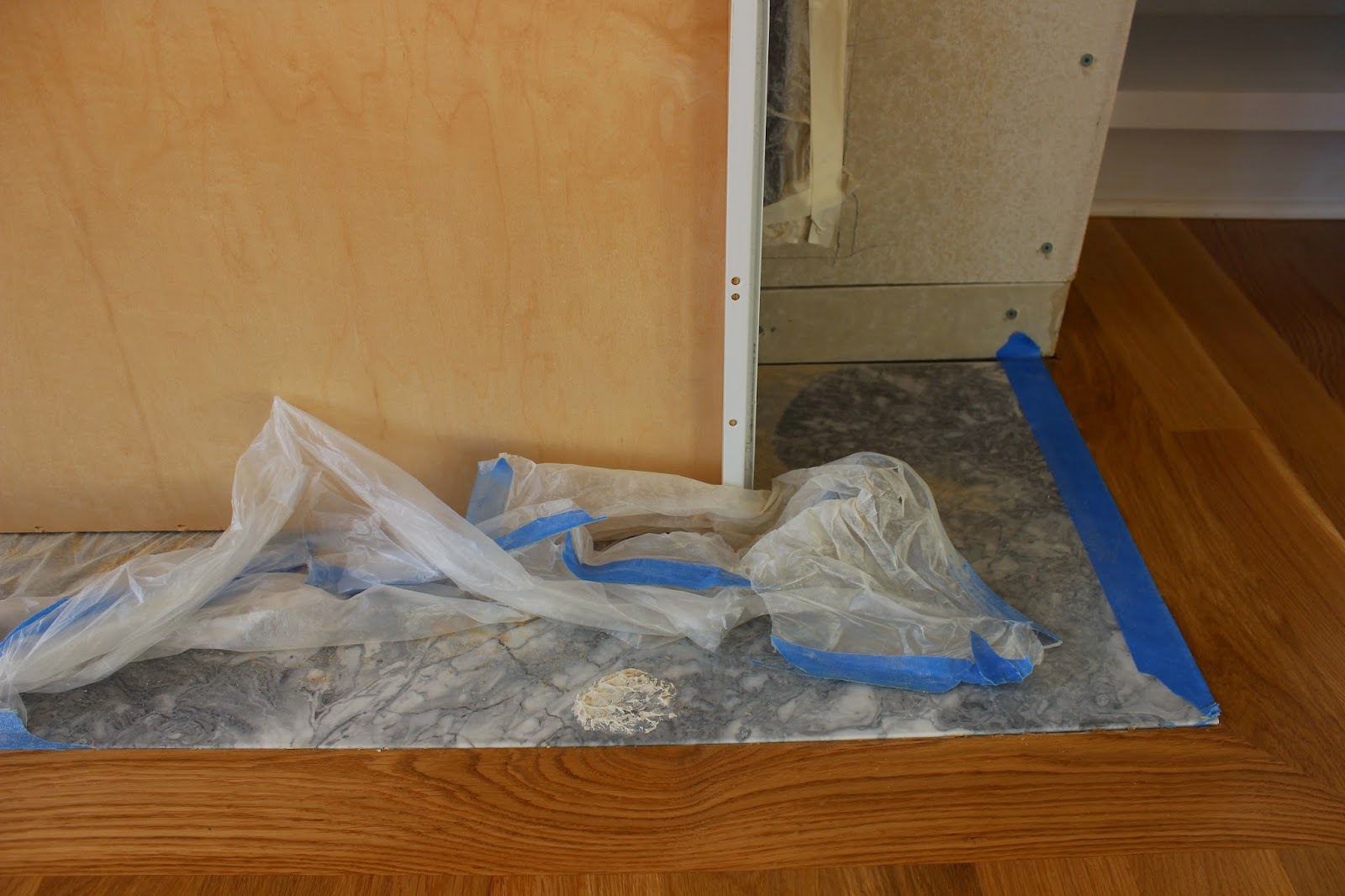 Sigh. Whatever. I’m just glad they’re DONE and none of us have to call them anymore to be more careful and stop leaving their garbage from lunch and cigarette butts all over the courtyard.

Moving on from my negativity…

Because no one could be inside last week, no other work went on, however, we worked at nailing down an exterior paint color. Initially Wendy was thinking about something in the green, or putty color range. Not too dark, but not light either. I painted these samples after color matching them from my book

But when Wendy saw them all, she wasn’t too excited (as I shared last week). So we went through the paint decks and got some other samples and went through Pinterest searching under descriptive words she had used. I painted all those colors on the exterior wall this time (the ones on the right). I didn’t think she’d like them (they came out so purple, it was weird) so I riffled through all of our samples we still had for the inside of the house and tried some of those as well (the ones on the right) 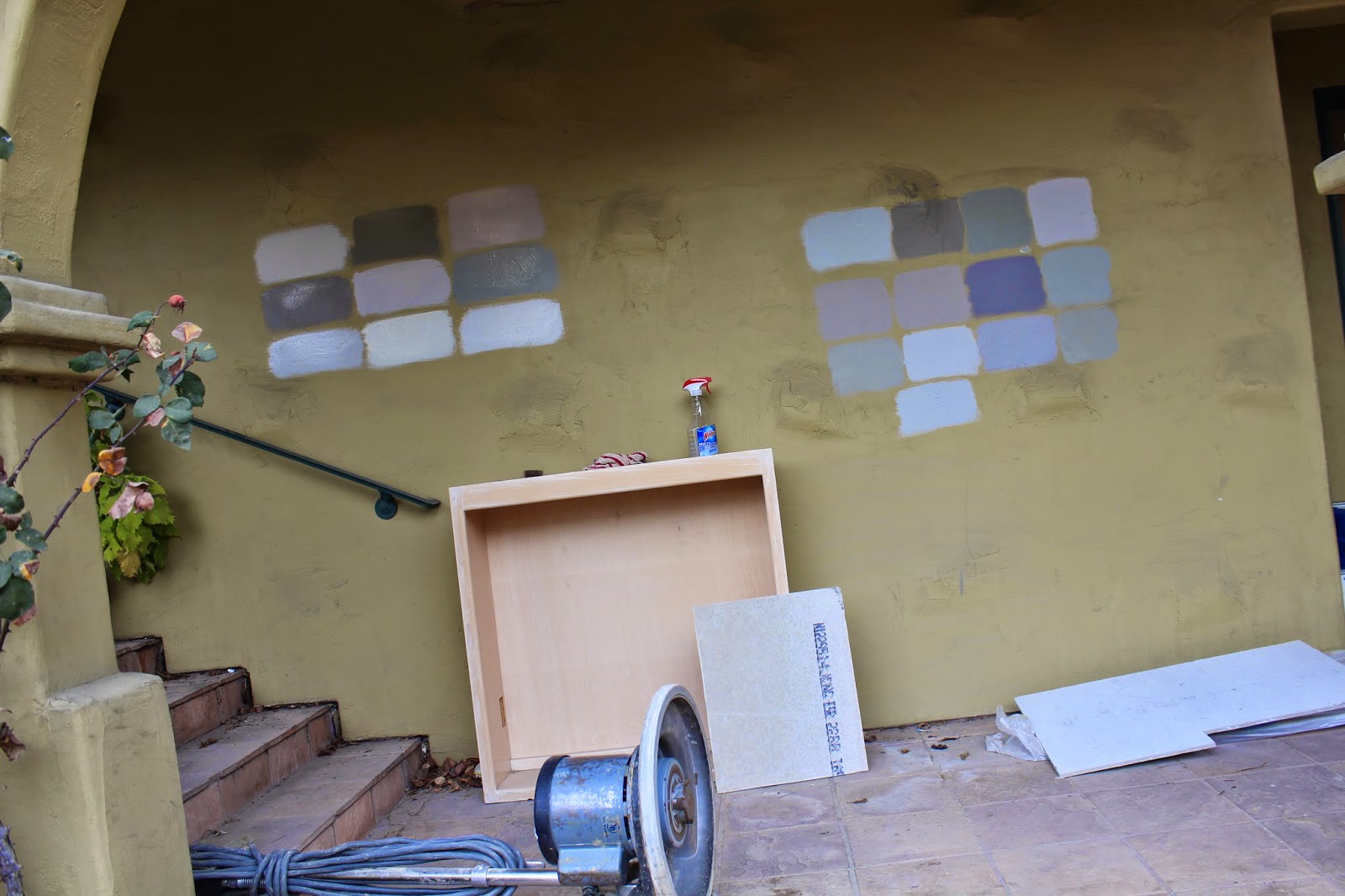 There were 2-4 in each group that my dad and I really liked, but again, Wendy wasn’t super thrilled. So we talked a lot about what kind of color she wanted. My parents are always thinking of resale, so because of that, she’s thinking about maybe a more traditional Mediterranean color scheme (creamy white with darker brown trim). I still think Wendy doesn’t have to go that traditional for fear of alienating people, so we put together another set of samples and I painted them on the wall 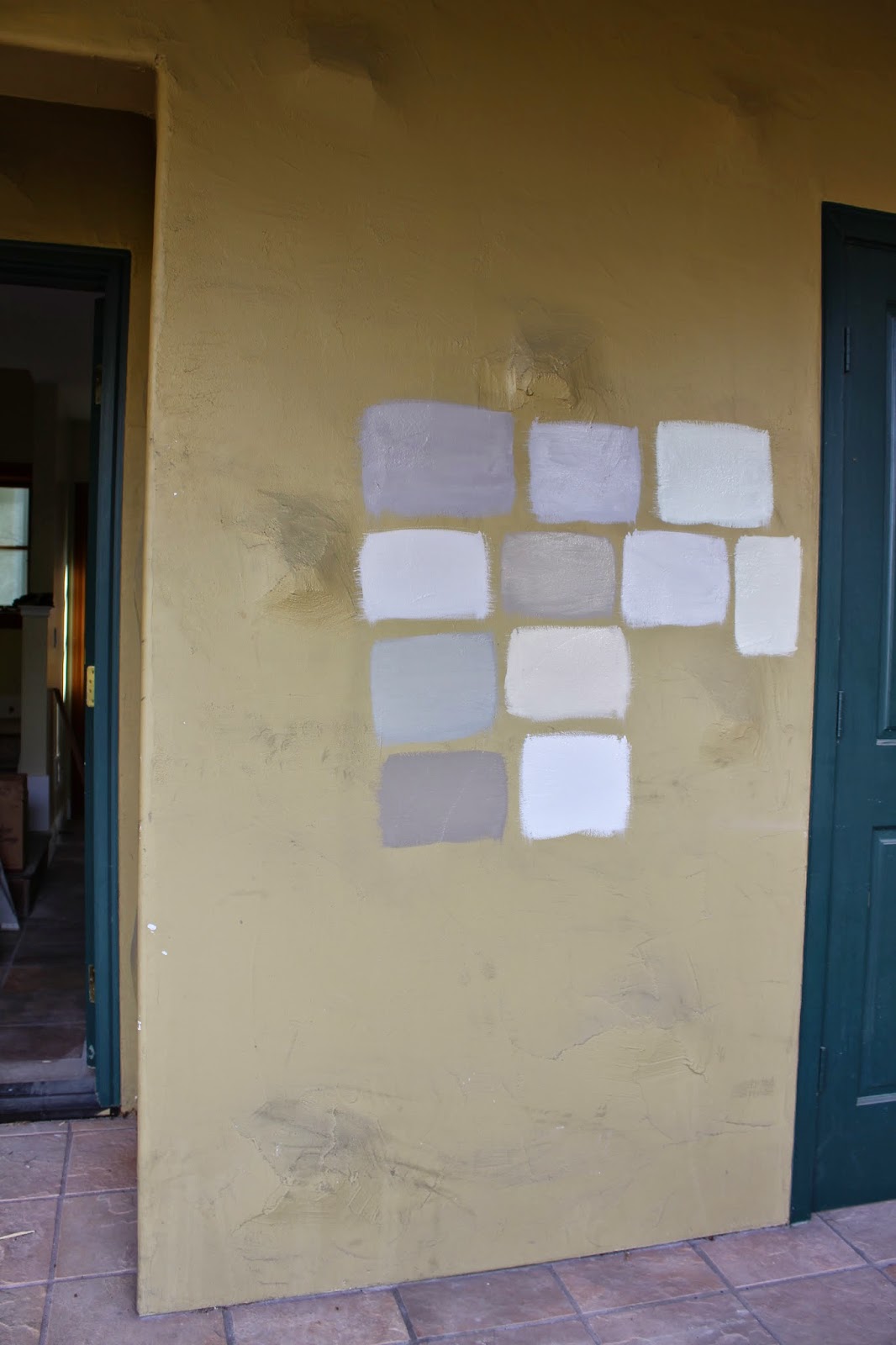 It is CRAZY how purple the colors end up looking when they go on (this was right after I painted, and they tend to dry browner). Currently there are 46 samples that have been painted… 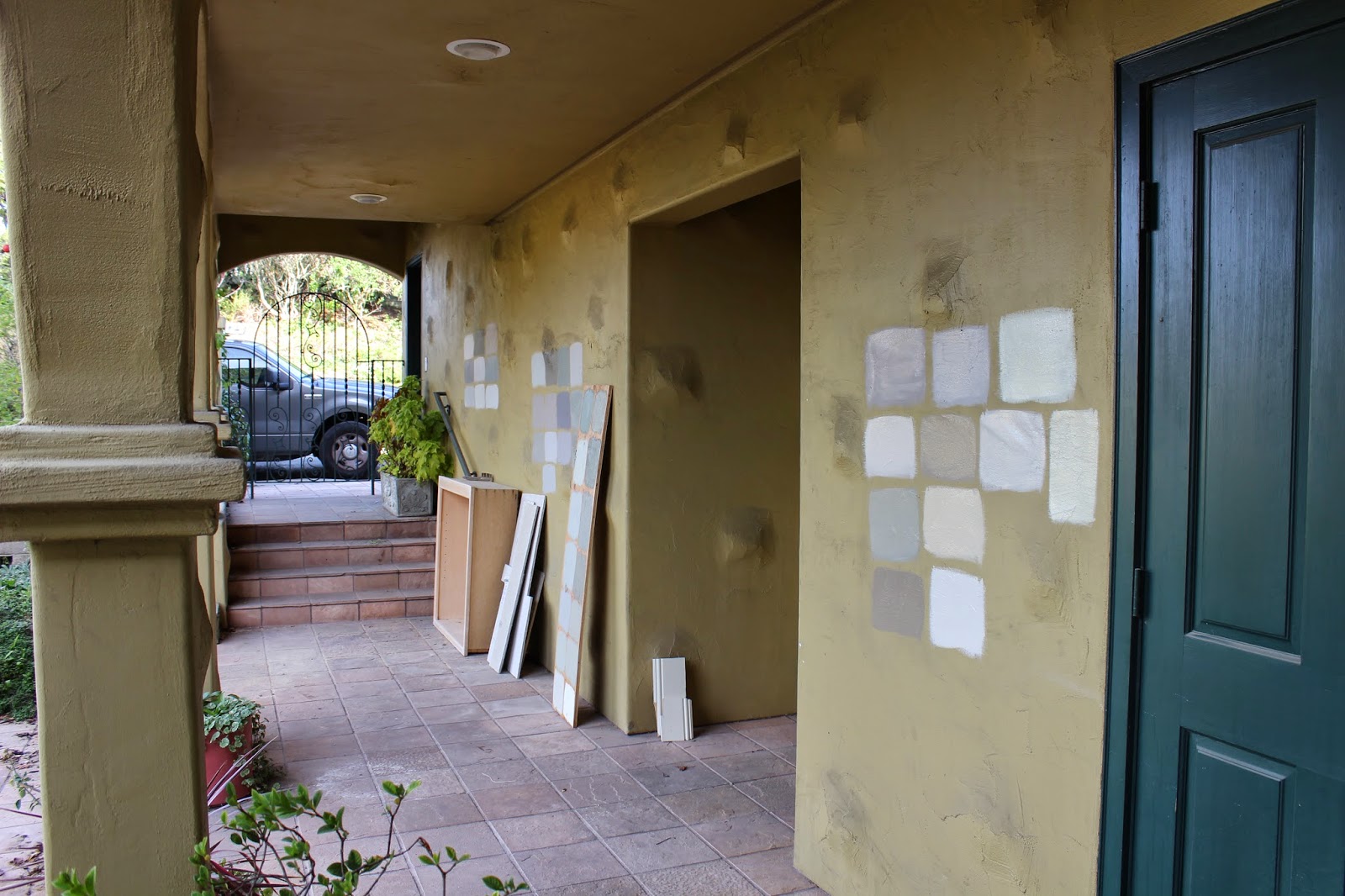 Hopefully there’s one in there that’ll work 🙂 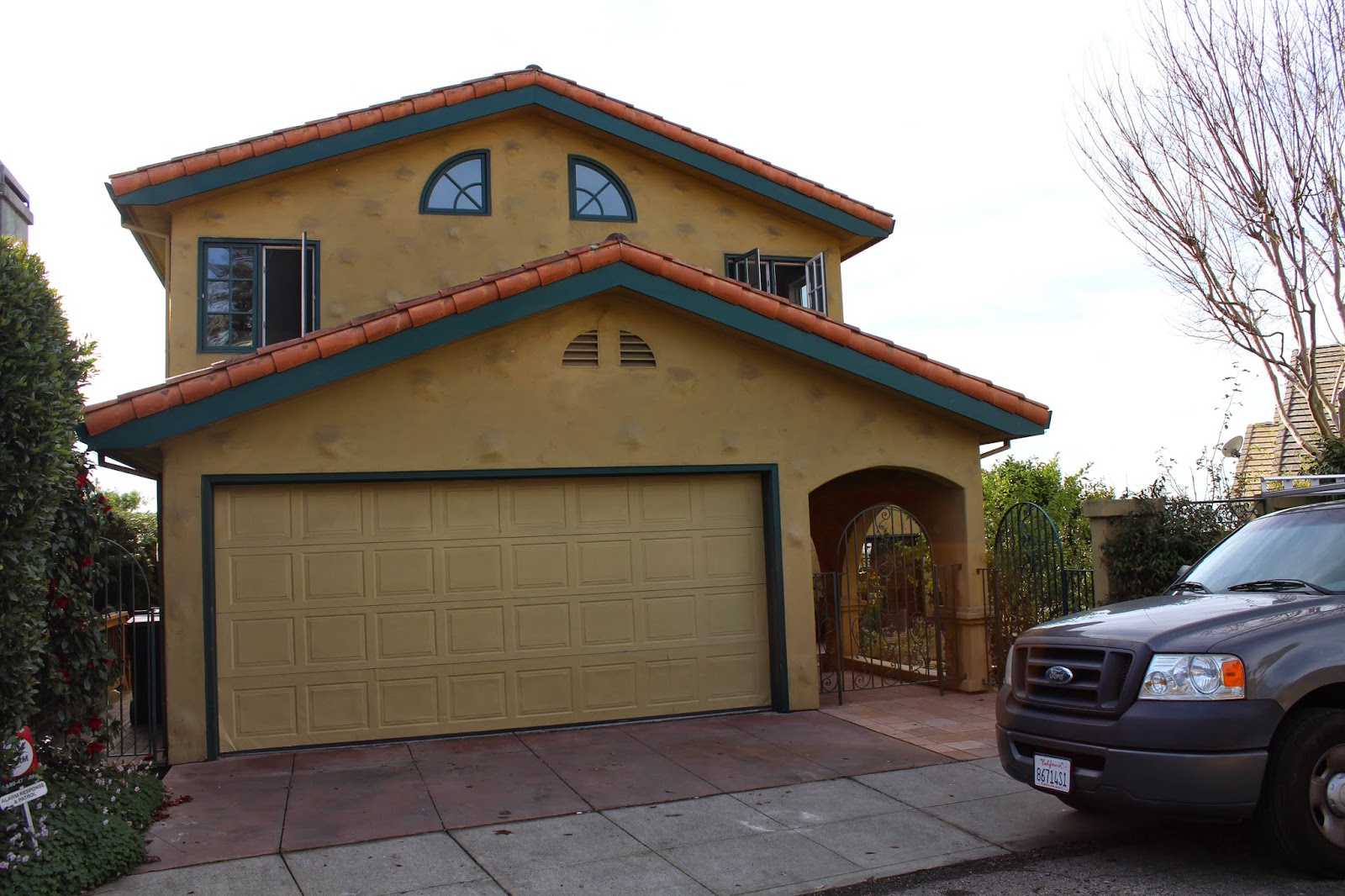 It might not look too bad, but there are a lot of dents in it and it is showing it’s 20 years of service. The garage is such a huge portion of the curb appeal of this house, so my dad and Wendy decided to go with carriage looking traditional opening doors. They picked the doors they liked, but it’ll take 3-4 weeks for them to be installed (their carriage style doors are special order items. Of course.) 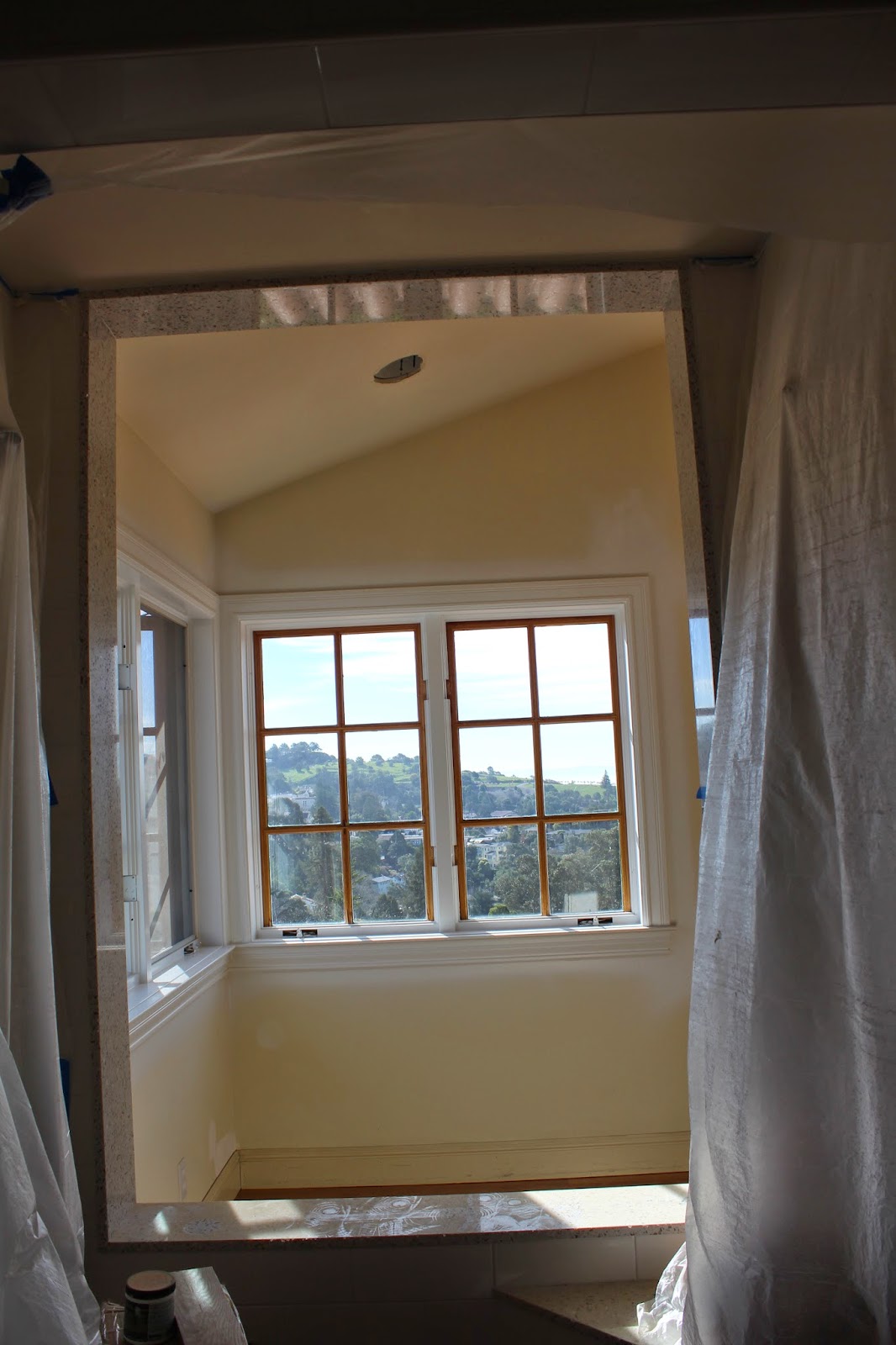 That means that shower “window” will finally get the glass installed and it will sort of all make sense in the space! 🙂 The plan is to have it frosted to about boob/shoulder height to allow for privacy, and then have it be clear above to take advantage of allllll the light this room gets. And to enjoy a pretty spectacular view while getting all shiny clean 🙂 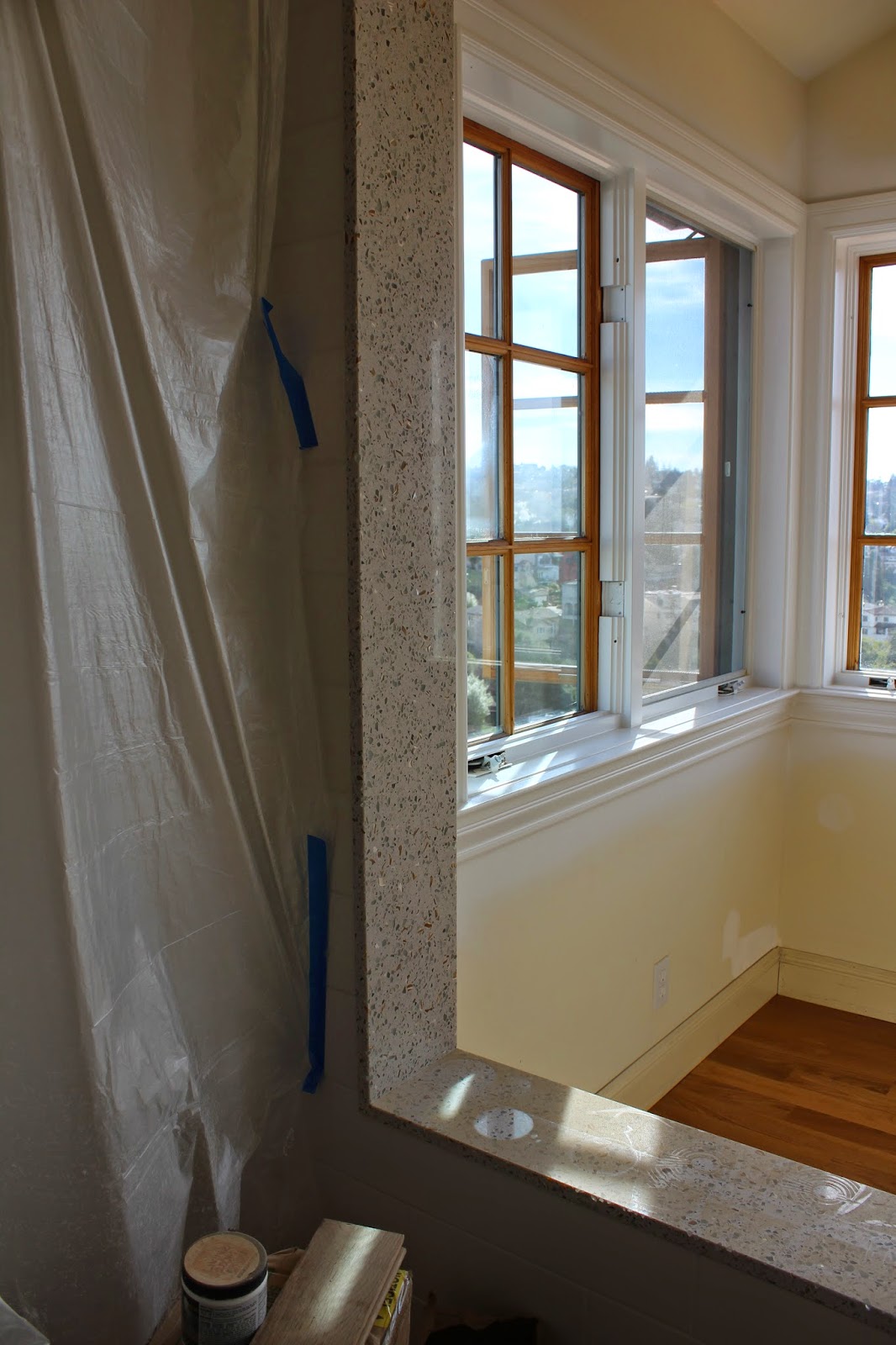 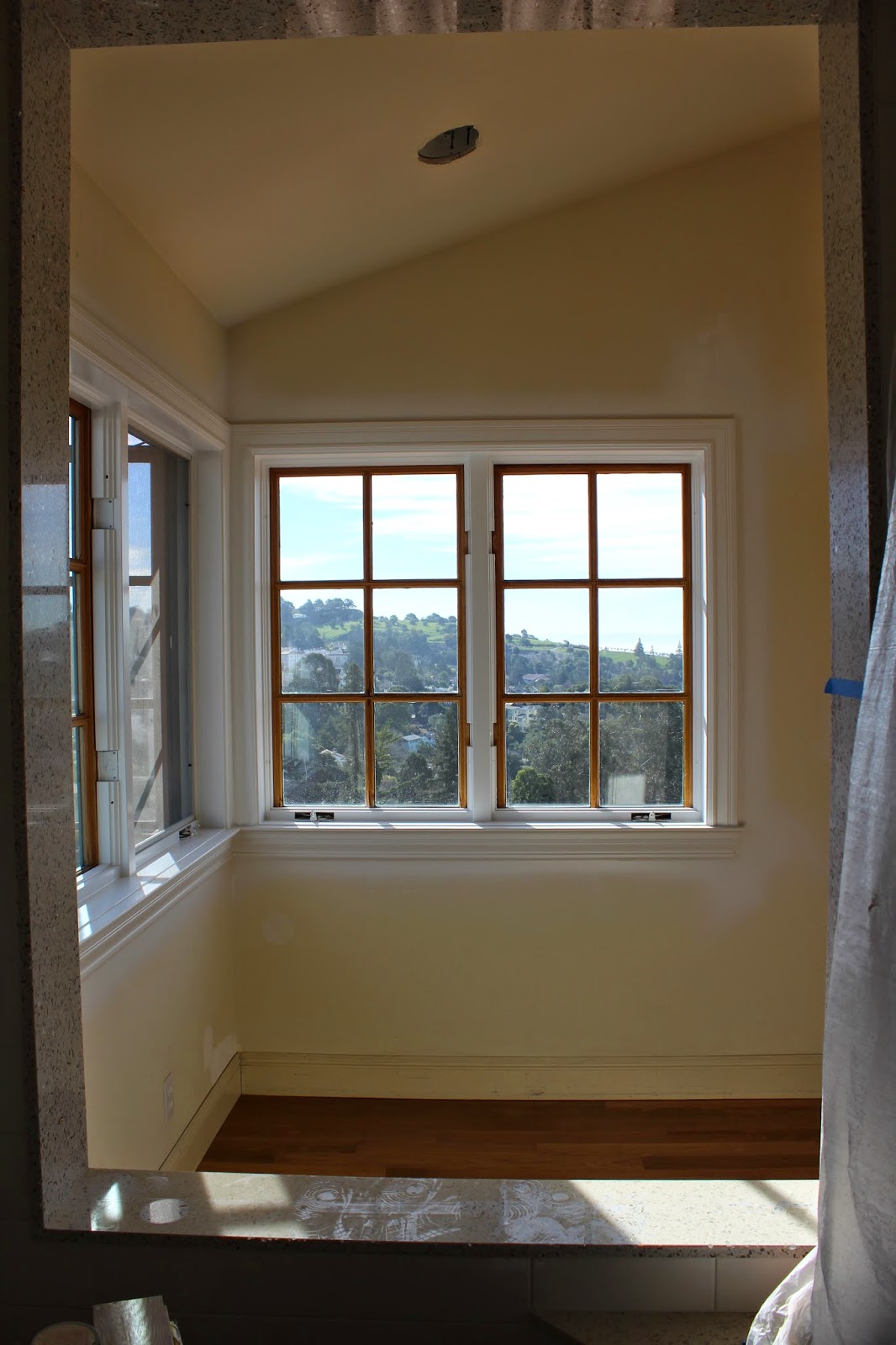 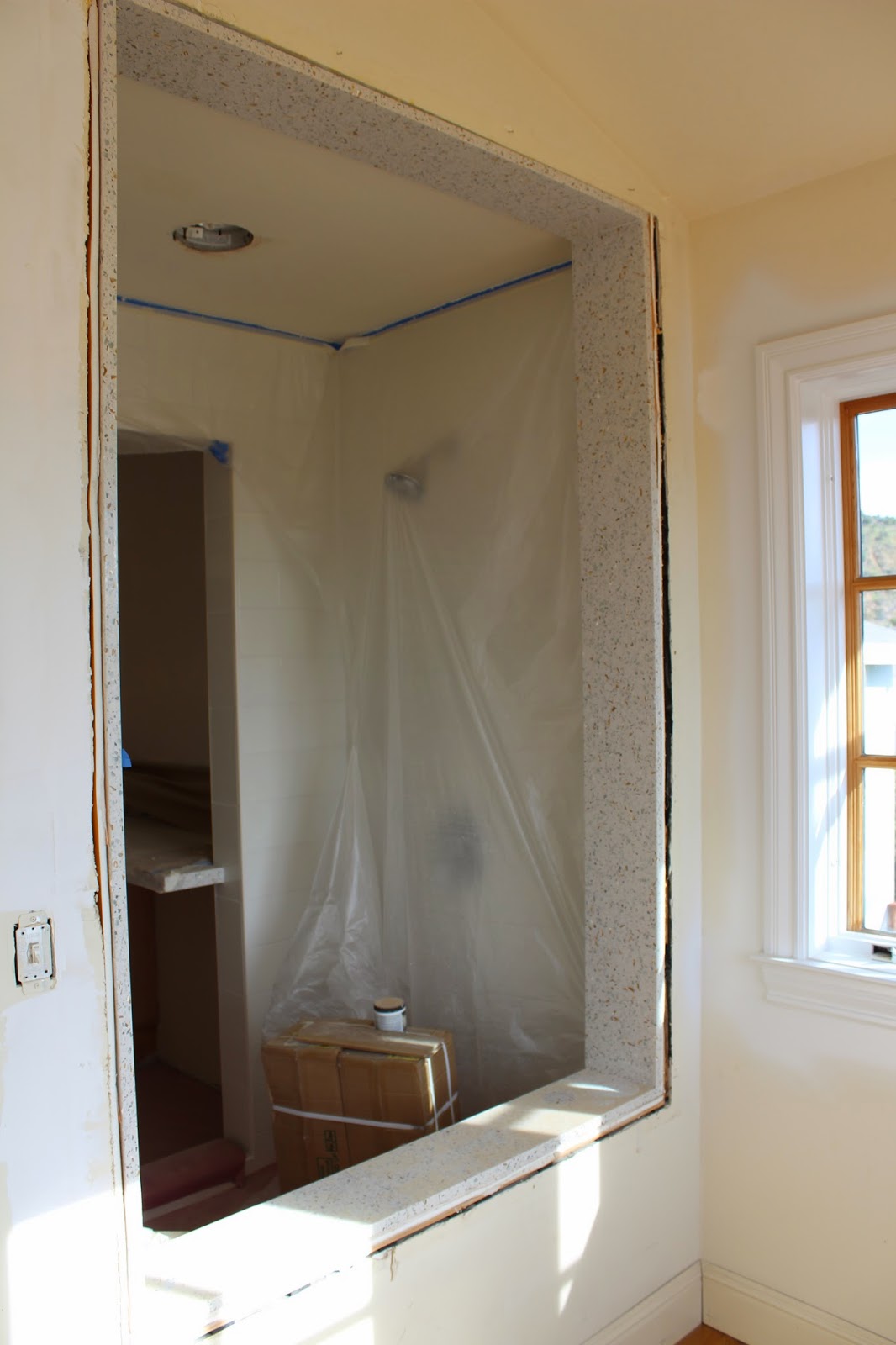 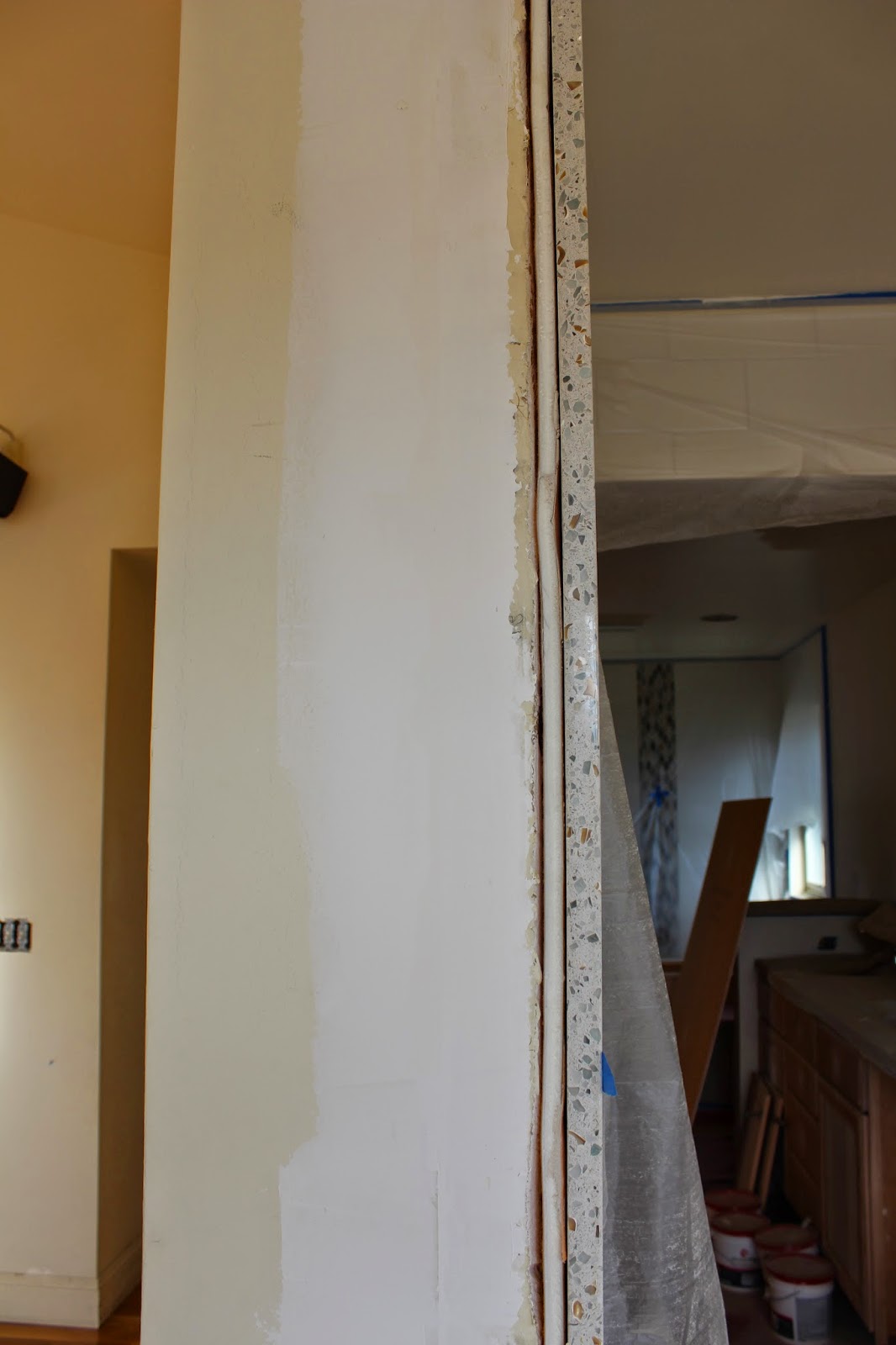 But that will come after the glass has been installed (10 working days out at least).

Welp, I think that’s all the progress for last week, and mostly this week too. We don’t really want trades inside this week just to give enough time for the poly to cure without heavy equipment sitting on top. But Monday the painter will come in to paint the last remaining rooms, touch up and paint the baseboards now that they have been re-installed with the floors done. And our tiler will come back to finish up one or two last projects.

THEN, it’s finishing touches. Ahhh, my parent’s move in date is officially less than a month away – time to get a move on!

« Little Football is a…..
Picardy Poll: Decora vs. Flip Switch »