We’ve never really planned to do anything in this room – which is good because now the plan is to move. It’s weird though. I feel like with every room in the house there has been a final vision, or at least things I imagine doing. But not with this room. That’s a very strange thing to me. So it’s good that I’m not going to be missing out with this room, which is a bit of a shame because the round fireplace in this room is very cool. 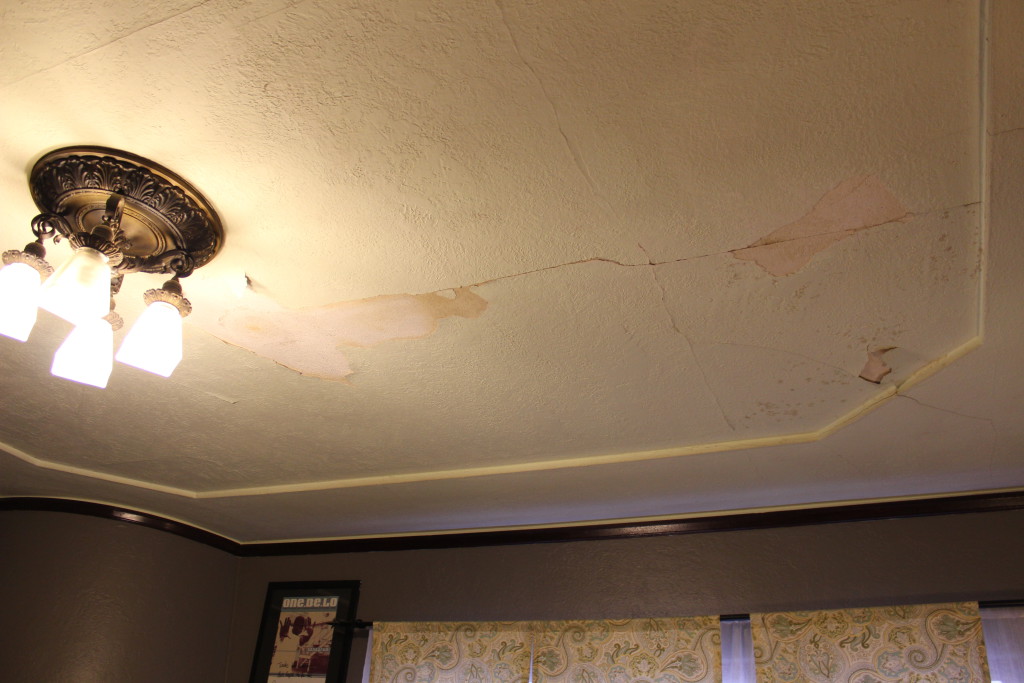 In all the time we’ve been here this ceiling has been peeling away. Surprisingly over the last 7 years we haven’t really had any plaster fall down on us. So that’s a good thing. But with it on the list of things needing to get done before we move it’s time to get to it.

Most of the time with this house the plaster has been so damaged that we need to do work to reattach it to the lathe. This plaster isn’t in that bad of condition, it just needed to be scraped down where it’s peeling and then a skim coat done over the whole thing. First Chris taped over all the egregious cracks. This helps for stronger joints when the mud is applied. After that was done he applied mud over all the cracks and uneven parts 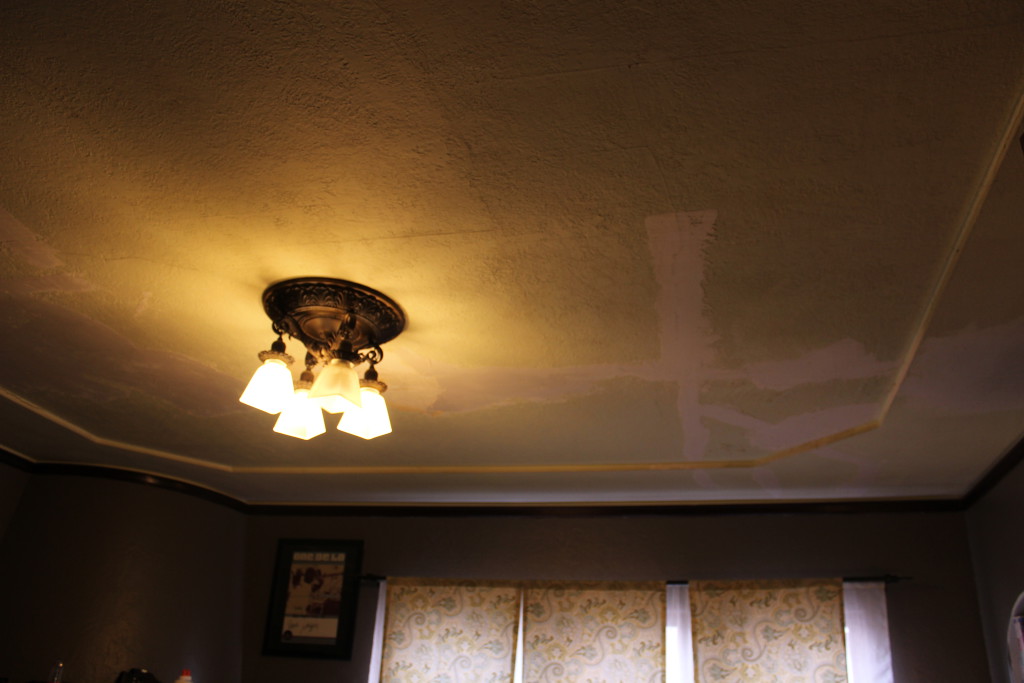 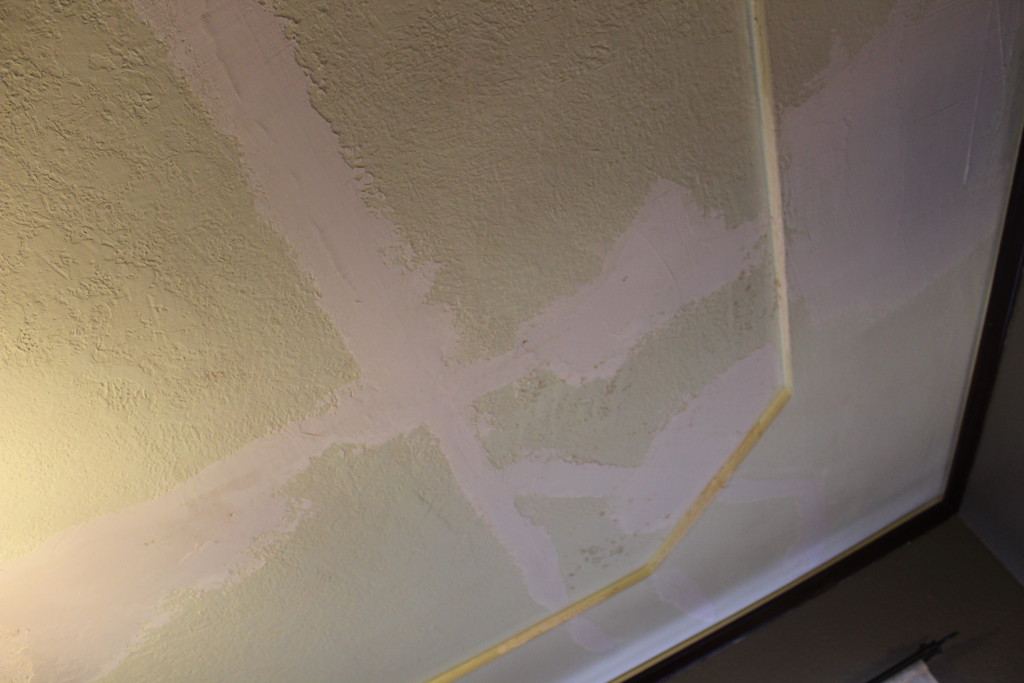 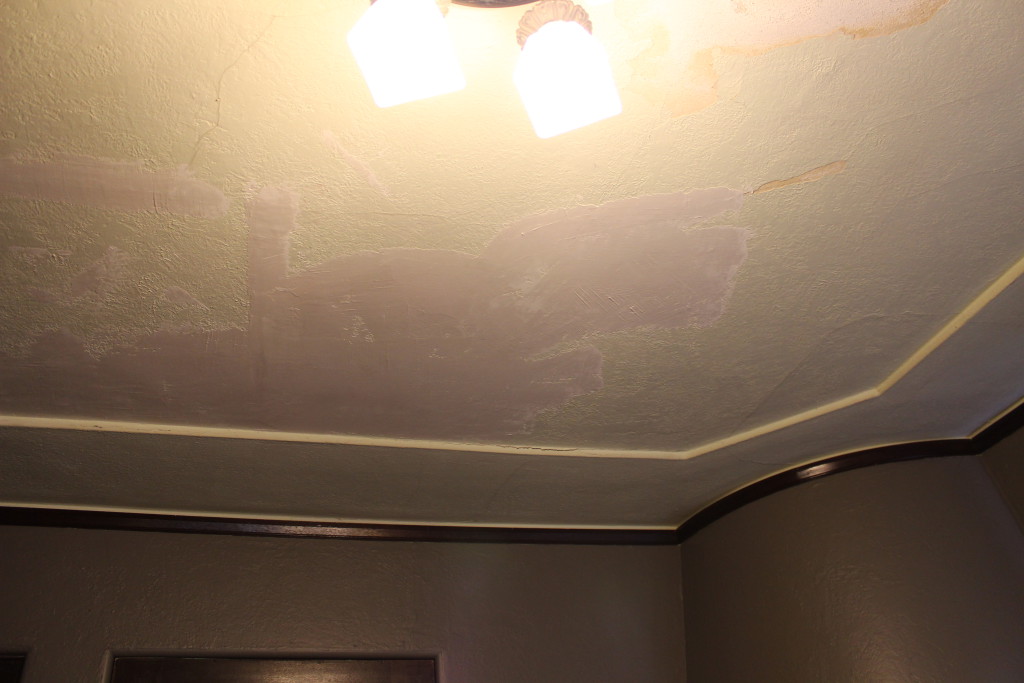 Once that work was done it was time for a skim coat over the entire ceiling. Zoe has actually gotten pretty interested in a lot of the work going on around the house lately. She’s always been interested in doing what we’re doing and being a part of what’s going on with the grown ups. But it’s been really fun to see because it’s been a while since we’ve actually WORKED on this house on any sort of a consistent basis. It’s cool to actually get to work on things while having kids run around, but that one of them actually wants to help us. She was really good at slowly pouring water into our bucket while Chris thinned out the joint compound 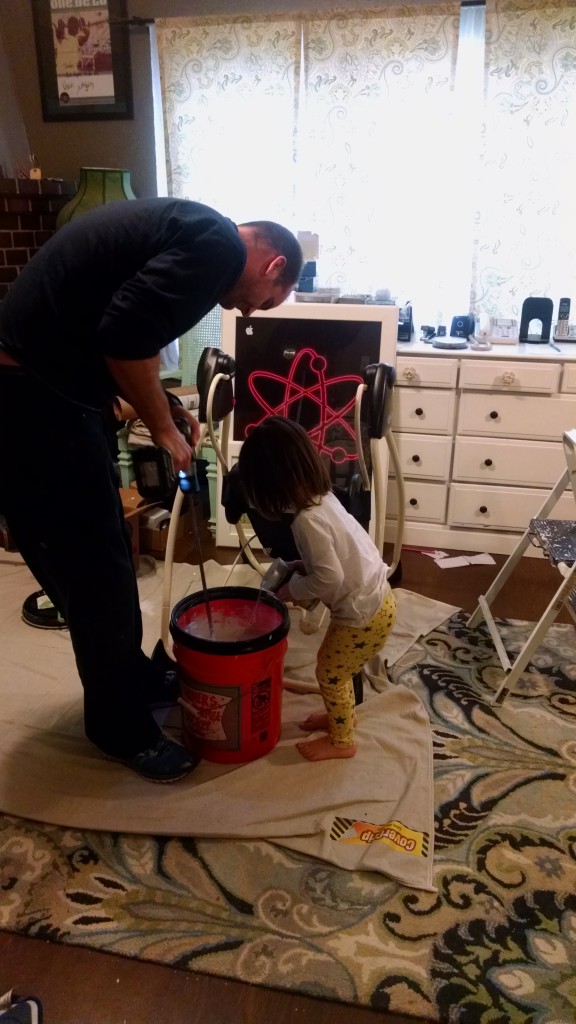 She was pretty adorable during the whole endeavor 🙂

After the skim coat was done Chris applied the texture on the ceiling. And again, Zoe insisted on helping 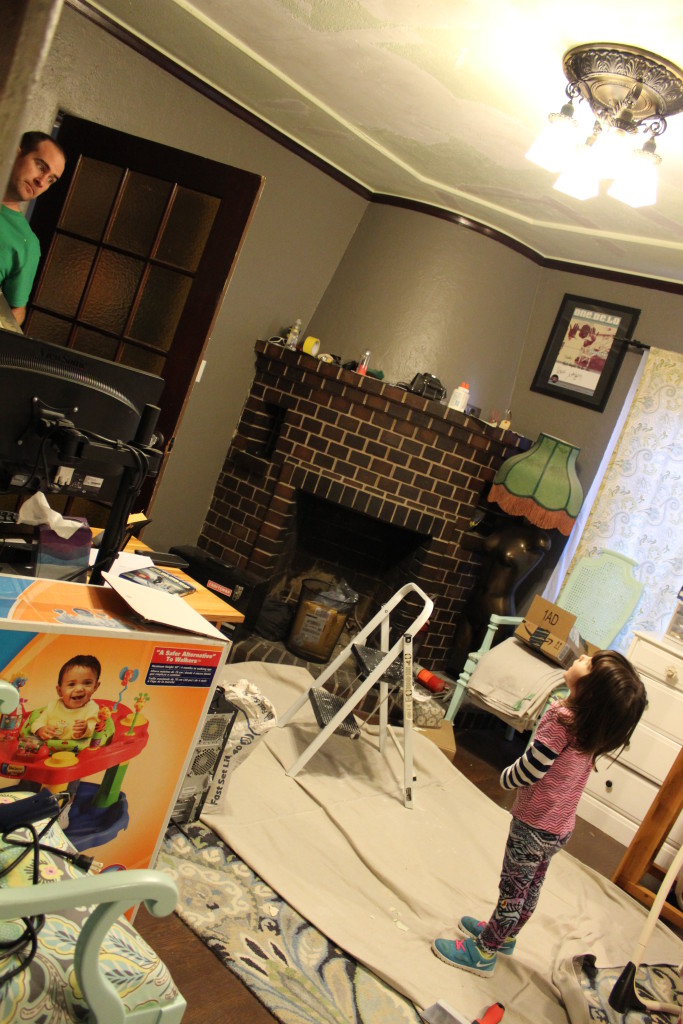 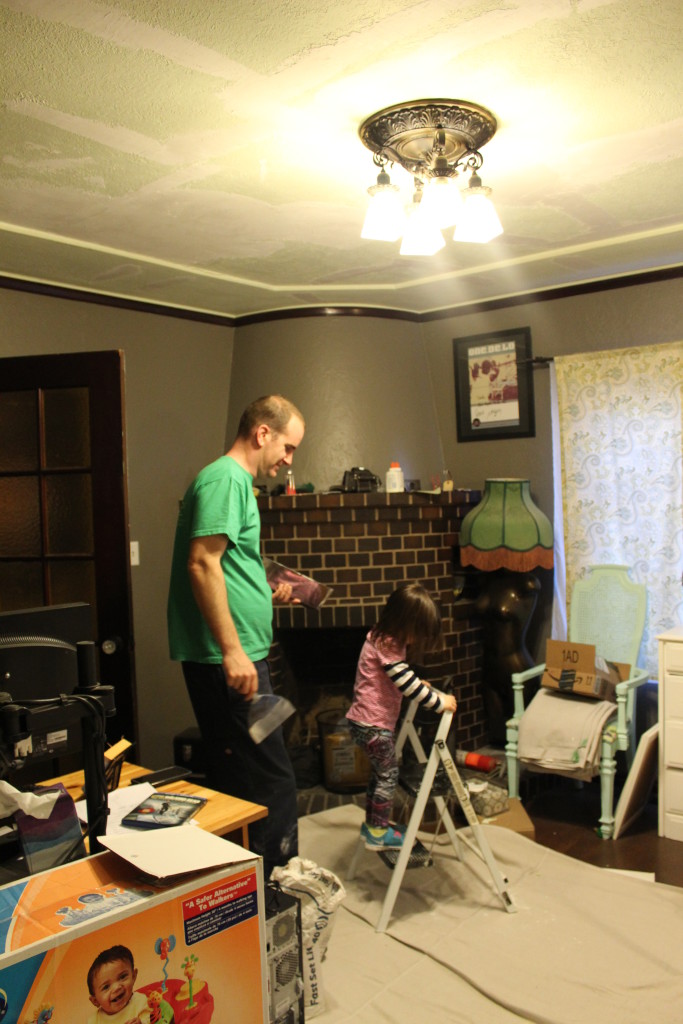 Chris has gotten really good at replicating the original plaster texture throughout our house. We want to make sure any of our “new” spaces look like the original spaces. After texture was applied it was time for primer and paint. And then it was done! (again, Zoe “helps” lol) 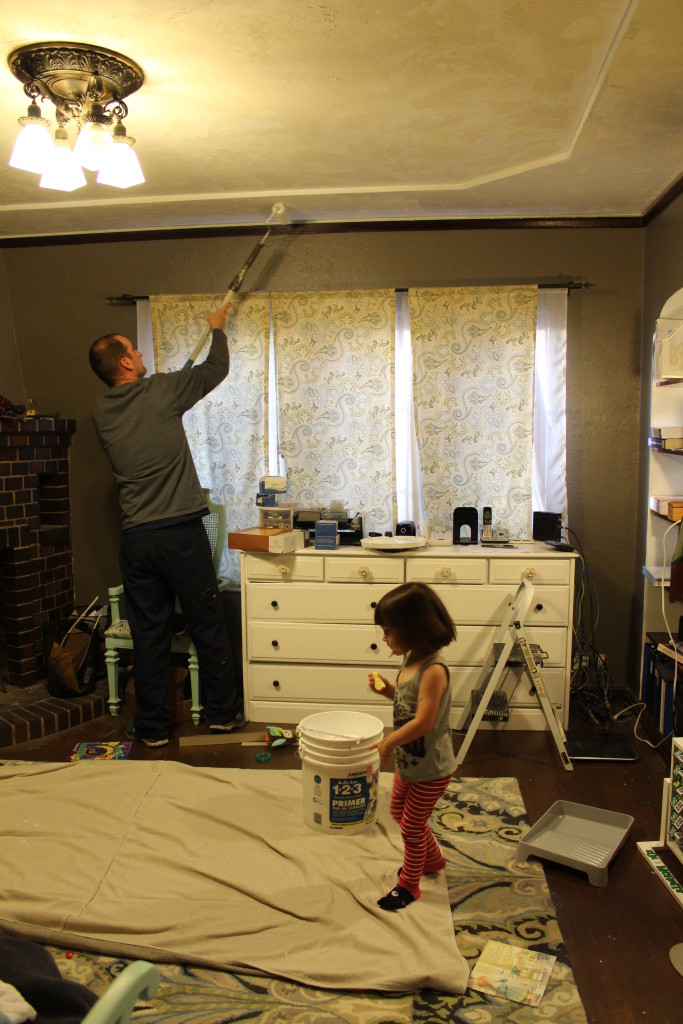 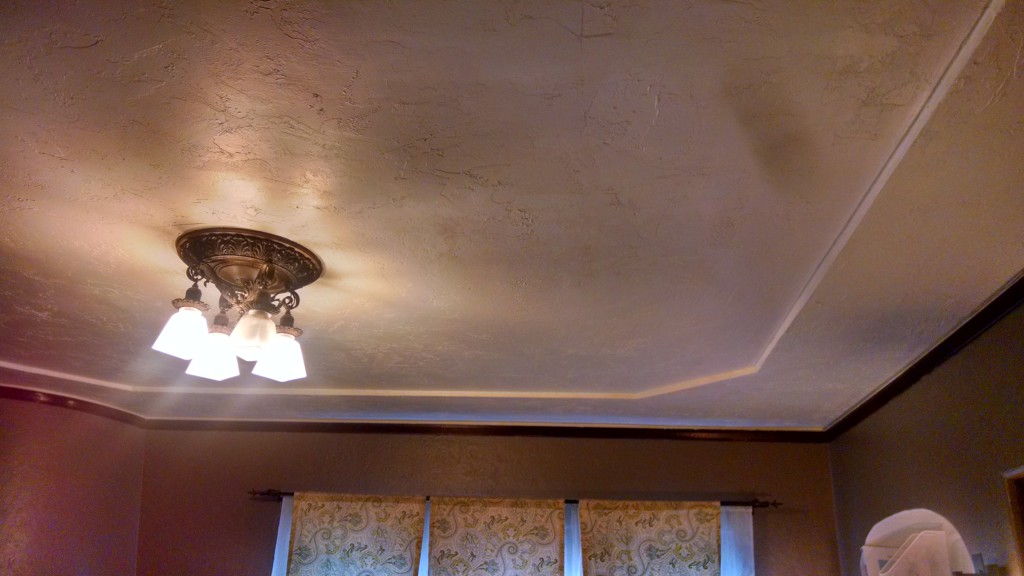 It’s fucking WEIRD to see this ceiling bright white without peeling plaster. We were “supposed” to paint this room for resale, but decided not to. There are too many windows and doors and that curved fireplace, so we decided it’ll just get some REALLY bright bulbs instead. It’s strange, but it’s been 7 years. 7 years of peeling plaster. And how it’s clean and done.

Another weird space to see done. The closet. What closet? This is a GIANT closet and we never did ANYTHING to it since we moved in 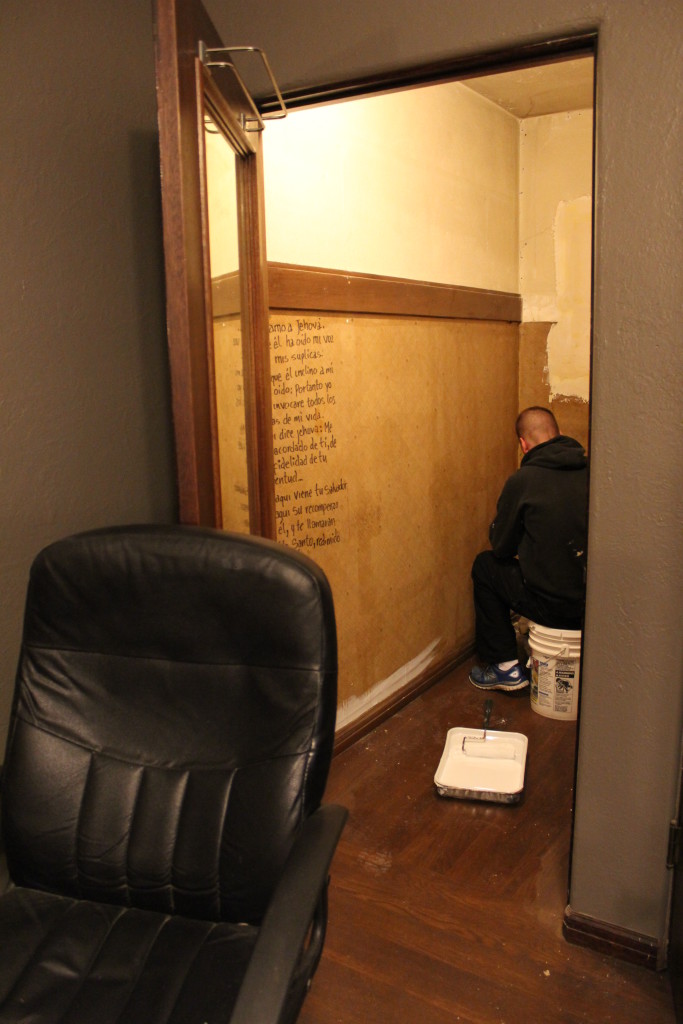 There was great writing on the wall from the previous owners 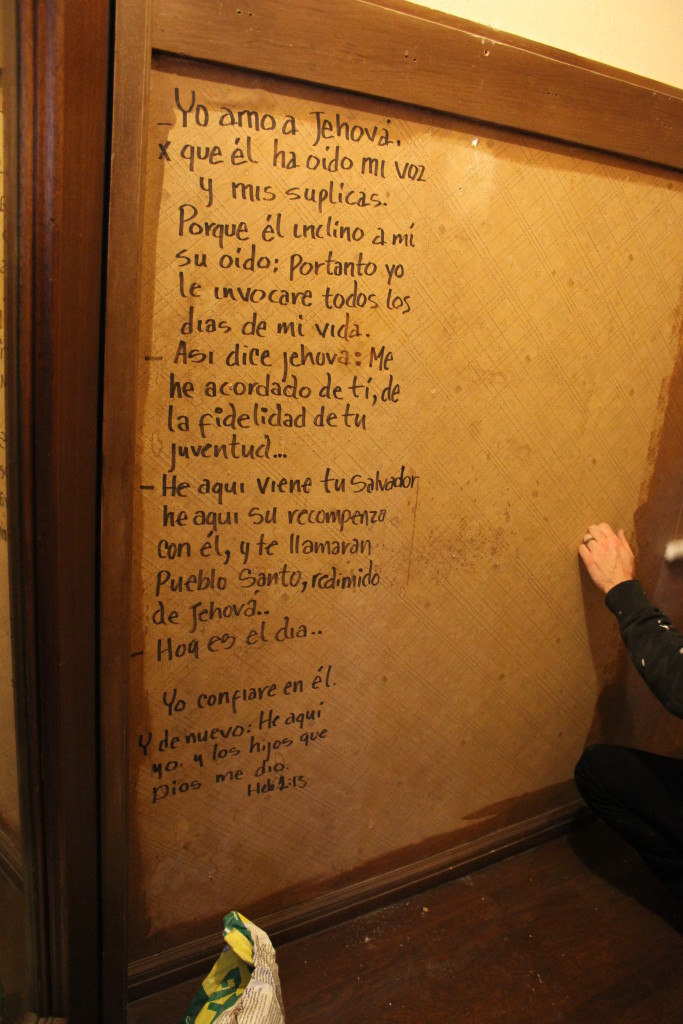 And the plaster was cracked and damaged. We never did anything in the 7 years we were here though because we just lined all the walls with bookcases and put all of our DVDs in here (we’ve got well over 1,000 – I told you, we love movies). It was the perfect “DVD closet” for us. But again, now that we’re moving, it was time to finally get to repairing it.

There was a window in the back of the closet (the laundry room that backs into this used to be a porch, so the window in here looked out on the porch). It was taken out well before we lived here and the trim was damaged and only partially in place. We decided it made the most sense to close up the window and patch the wall with drywall.

Chris took out the damaged trim and then was left with the back wall that needed to be patch. He put up some blocking and then installed a drywall patch. After the patch was installed it was time to mud and tape. Not only the area where the patch was done, but throughout the space (there were lots of cracks and holes throughout).

After the patches Chris applied primer on the bottom portion of the closet where the wallpaper was. It was OLD and damaged, so we painted over it. But the primer wasn’t regular primer – it helped make sure the wallpaper adhered to the wall and blocked the stain in from the wallpaper glue. And it stank like shit. I HATED it. I’ve always been really sensitive to smells, and since having kids it’s made my smell powers have super strength. I’m normally the painter, but because it was so awful, Chris applied both coats 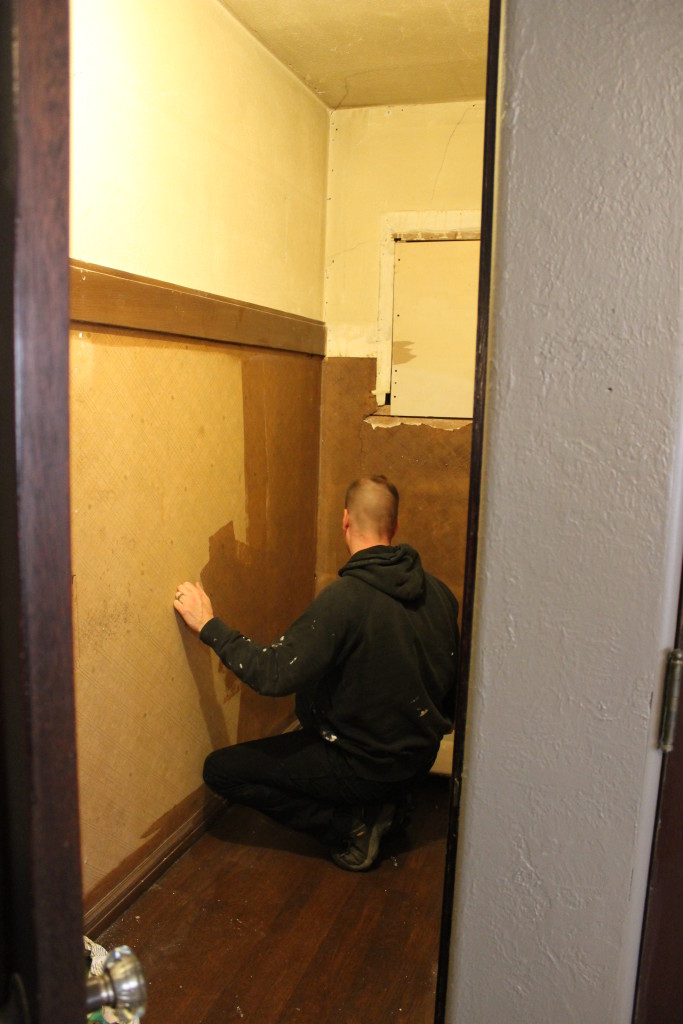 And then because he’s a rockstar, he also applied the color coat in here also unbeknownst to me. I feel like I’ve been painting everywhere lately, so it was a nice little treat to ask Chris over dinner a couple nights ago what paint I should use in the closet for the color coat only to have Chris tell me he’d already done it 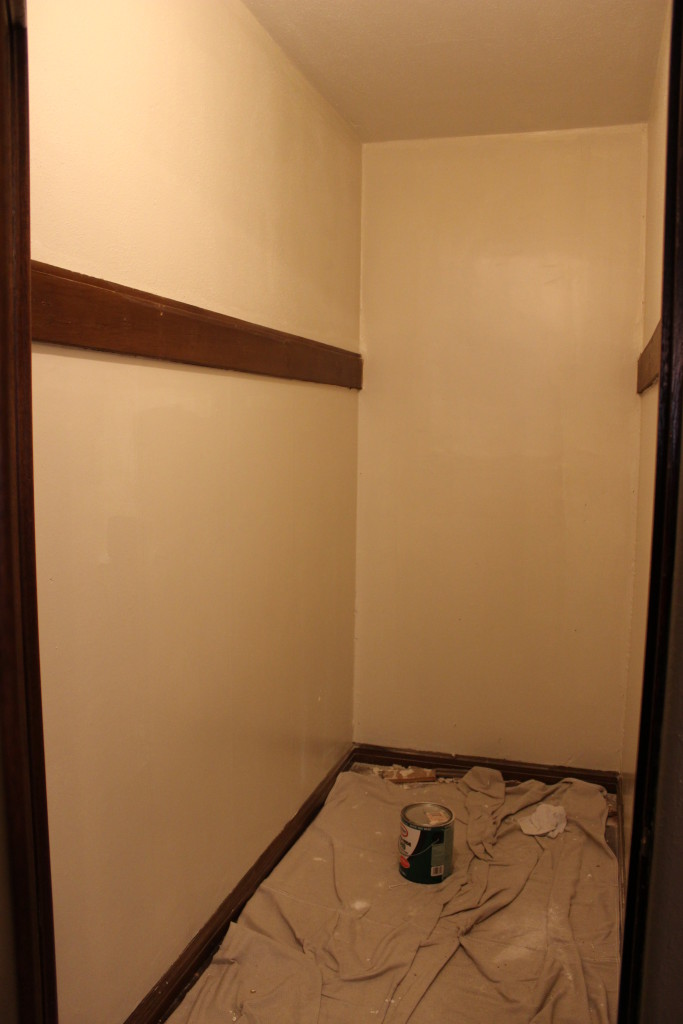 It was pretty quick an easy of a space to redo. I wonder why we didn’t do it 7 years ago…