I thought I was just going to write these posts every year from now on. But it seems fitting to do a 6 month check in on this little crazy seeing as last year I went from monthly to quarterly. I don’t have my “official” chair picture, but I’ll sprinkle in some Zoe cuteness as I run down the last 6 months.

These are the words people frequently use to describe Zoe: crazy, firecracker, piece of work, Zoe the destroyer…you get the idea. This child has a mind of her own. And it’s a stubborn, strong, willful and also pretty smart one 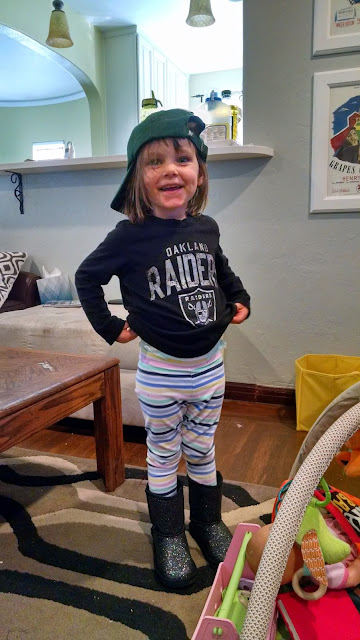 There is no doubt about Zoe’s verbal skills: the girl can talk your ear off and is pretty advanced about language. Her day care provider keeps thinking she’s 3 because she can talk so well (and because she’s tall as shit). That’s probably the thing people observe the most about her – they’re very surprised at her just hitting 2 1/2 with all the crap she talks about. It should come as no surprise seeing as I can’t ever keep my mouth shut. The two of us just talk talk talk talk talk. Poor Chris. Hopefully Merritt is quiet 😉

What does she talk about? ANYTHING. I like to say she narrates life. It’s funny. She could be by herself playing at the park and you just watch her and she’s talking about what she’s doing to herself. Or trying to talk to some other kid. Or just talking to nothing. It’s hilarious. It always makes me laugh and smile. I love it. She also “reads” books to herself. When you read books to her she frequently moves her mouth to the words with you. She does the same when she watches other people have conversations with each other. She does the same with songs. She listens to you sing and moves her mouth. Sometimes she doesn’t move her mouth correctly to match with the right words, but it’s like she’s practicing for when she knows it all.

Speaking of songs, oh MAN this girl likes to sing. I feel like each week she’s got another song in her pocket. We love ABC’s, Twinkle Little Star and Old MacDonald. We sing those 3 songs over and over again. She sprinkles a lot of others in there as well, but those are definitely her favorite. She also LOVES listening to the radio and likes to ask which song is playing and who is singing it. Her favorite song is “Renegade” by Jay-Z and Eminem. Definitely appropriate, lol. She always asks for it.

She loves to ask questions. We haven’t hit the “why?” stage (or maybe this is just her “why?”), but her 4 favorite things to ask are:

2) “What’s your name?” OH MY GOD she asks this ALL THE TIME. At first she would ask us what someone’s name was, but we encouraged her to ask people herself. So now she asks us, we say she should ask, she’ll tell us, “I’m going to ask him/her.” Then, with just so much authority and confidence she orders/asks, “WHA YO NAME?” (with her little toddler accent.) Sometimes it involves an assertive point at the person as well. Frequently people are a little thrown off but this little person being so direct and so they sort of act surprised for a second. Then they answer and ask her. This one took her a while, but now she responds, “My name WoeWe.” (it’s so fucking cute how she says her name.) She will continue to ask the person over and over again. All the time. She LOVES to ask. One time she asked our neighbor about 10 times in the span of 2 minutes. Luckily she’s little and cute, so it’s funny. Not weird. I wonder when it will get weird…

3) “He/She talk?” She LOVES knowing if people talk. I wonder if she just notices that people don’t talk as much as her (lol) so she’s wondering if they do talk at all. It’s a hilarious question she asks. It is frequently following asking what someone’s name is: “Wha yo name? He talk?” That kid cracks me the hell up.

4) “[insert name], you happy?” This is frequently asked after she knows the person is not happy. And it frequently involves Chris or I, lol. She might have done something wrong or knows she’s being a bit of a trouble maker, “Momma, you happy?” Usually it also involves her saying right after, “I will make you feel better.” And she gives you a hug and kiss. Can’t stay mad at her long, that’s for sure. 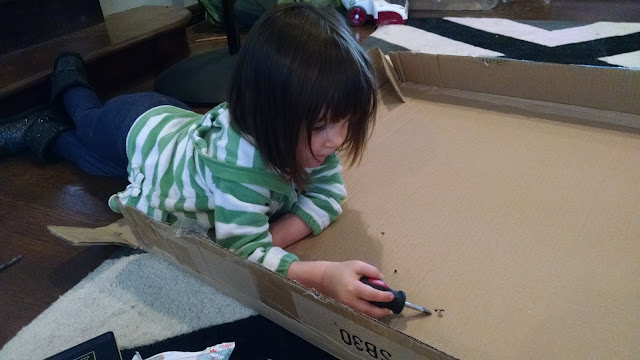 She loves to learn. I love that about her. She asks lots of questions and day care says that during morning curriculum they started her a bit early because she’s one of the younger kids but is interested in what’s going on. We go over letters and stuff at home, but I don’t press it. We learn what she wants to learn. I want her to make sure she likes learning and doesn’t feel like she has to at this age – because she doesn’t. I’m much more concerned with her learning to play with kids and getting dirty and discovering things than I am with her knowing the alphabet. It’s an added bonus that she likes to play with letters and wants to sing the ABC’s.

She is funny as fucking hell and loves to make people laugh. That has really never left her. She really enjoys people and likes to interact with them. She LOVES things that are funny and particularly likes physical humor. A friend of mine has 2 boys that are 5 and 3. They’re always rough housing with each other and Zoe loves to remark, “That’s funny,” and runs over to play with them. People falling down is hilarious to her. She’ll laugh and laugh. She loves when Chris acts goofy and falls all over everything. She just dies laughing. And she loves to be the one to make you laugh as well and when Chris and I laugh at something she does she gets a big smile on her face and says, “I funny.” She loves joy. 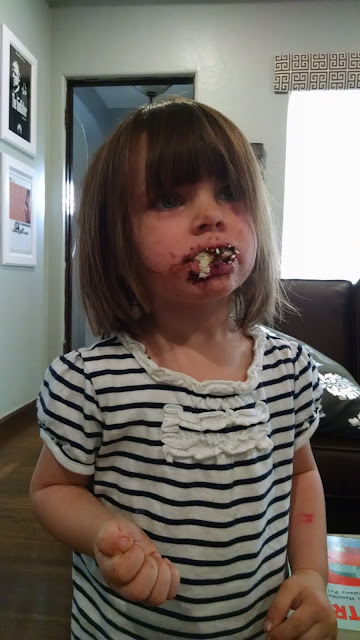 She also just continues to love people more than anything. She’ll tell me all about a boy or girl she met at the park on days she comes back with my mom. Or when I’m at the park with her she might just run up and hug someone. She always asks where her friends are (several of my friend’s kids.) The kicker is her adoration and love towards strangers. She certainly does NOT get that from Chris or I. I’m outgoing and friendly, but inside I’m actually a bit of a bitch. I’m the person on an airplane that PRAYS you don’t talk to me and I put headphones on AND read a magazine or book as an extra line of defense. Zoe? She could just socialize and talk with strangers all day long. On Thanksgiving we went out to get bagels (Chris is a “fake Jew” as I call him 🙂 hehe) and she decided at the end of the excursion that the family sitting next to us needed love. She hopped off her chair, walked over to them and hugged and kissed each of their legs. It was adorable. And the dad said, “That’s the best thing that’s happened on Thanksgiving,” and just had the sweetest look on his face. It melted my heart. I love how much she loves people and wants them to be happy.

She loves joy, but don’t let that fool you, this kid is also a bit of a bossypants. She is very orderly and likes things a very particular way 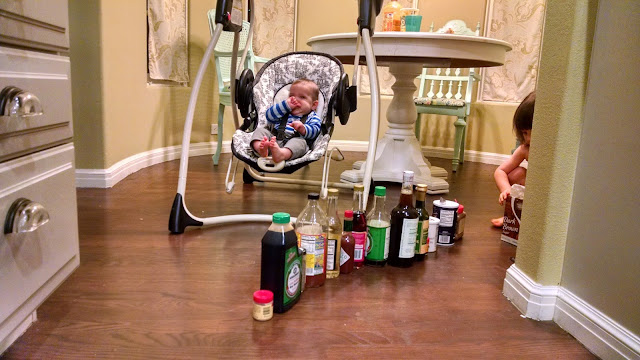 Lots of kids are like this but even her day care laughs about it (she has to put every kid’s cup in their correct cubby). It’s very humorous, but can also be frustrating at times and we’re working on it with her. She will yell at Chris and I or act out if we’re not understanding what she’s trying to ask or do. We try very hard to communicate with her and ask questions about what she needs, but she is of course limited verbally, so sometimes we all have a hard time understanding each other and she can get really frustrated when that happens. She definitely has a way she likes things. When she’s done with something in her room at night (like her water), she’ll leave it right at the door. And you absolutely cannot put it anywhere else when it’s done. That’s just where it goes. I think Chris has a bit harder time with it than I do when things get a little more testy with her. I have a very orderly brain and like things VERY MUCH in a certain order, so I understand how that little brain is chugging in that way. That’s not to say I don’t get frustrated because LORD is it aggravating at times. But it’s definitely something we’re working on.

She loves movies. And especially loves the bad guys or the mischievous characters. Lilo & Stitch from the same movie, Veruca Salt from Willy Wonka, the “mean witch” from Enchanted, etc. She thinks they’re fabulous. I don’t know whether to be worried about that one… 🙂 Other movies she’s liking right now are Alice in Wonderland and she LOVES Mary Poppins. 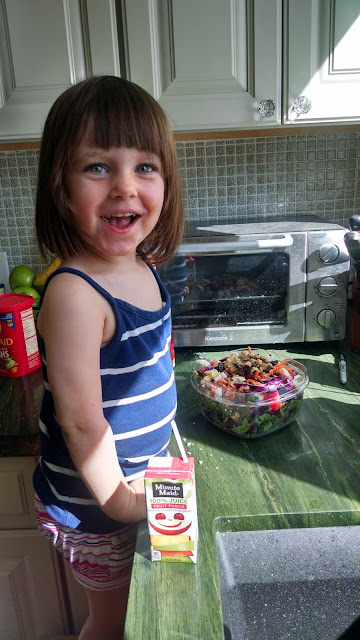 She’s got quite the lively imagination and has started imaginary play. She also likes to make up names for people in her books and make up things that she’s cooking. Oh, yeah, she LOVES cooking. LOVES it. LOVES to pull up her stool to the stove and help us. Then take out every single pot, pan, utensil, spice, etc. and pretend that she’s cooking. I try to not get frustrated when she’s making a mess and “cooking” because it’s a very good skill to have an will be helpful. It’s definitely full to have her be interested in it and we let her help us with things on the stove. 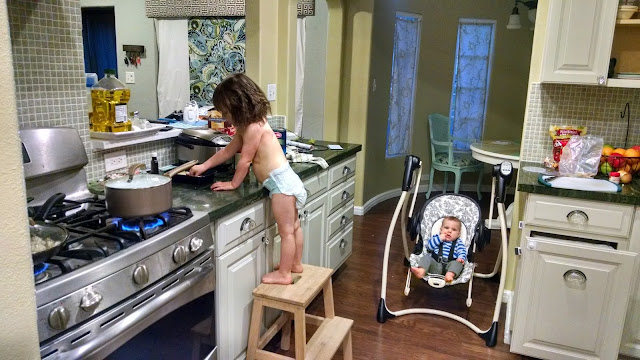 She used to LOVE to slam doors. Thank god that phase has passed. That was annoying. Jesus she would just SLAM them. We tried so many things to get her to stop: timeouts, putting a towel on the top, leaving them closed already…nothing worked. Thank god she stopped, it was so loud and I swear she almost broke a couple.

She loves water. We haven’t done swimming lessons in a while and we really should. That kid could just play in her plastic pool forever. Doesn’t matter if she’s clothed, it’s cold, whatever, she’ll jump in any water.

She’s still giant. Just hit 2 1/2 and exclusively in 4T clothes and almost in size 10 shoes. I still don’t get it cuz I was always a shorty. We’ll see if it sticks and she continues to be tall her whole life. I always wanted to be tall. So I’m envious 🙂 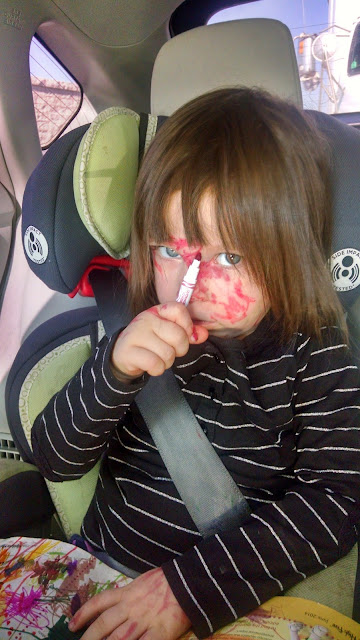 Hmmmm, well, I think that’s about it for now. She’s our tall, funny, loud, talkative, smart girl. She may drive me crazy sometimes with her energy, but I wouldn’t have it any other way. I can’t wait to see the little person she continues to be. She’s an entertaining one that little lady 🙂 Love you Zoe girl 🙂

« Things I’m Jonesing for in a Future House
Holy Shit…CABINETS! »