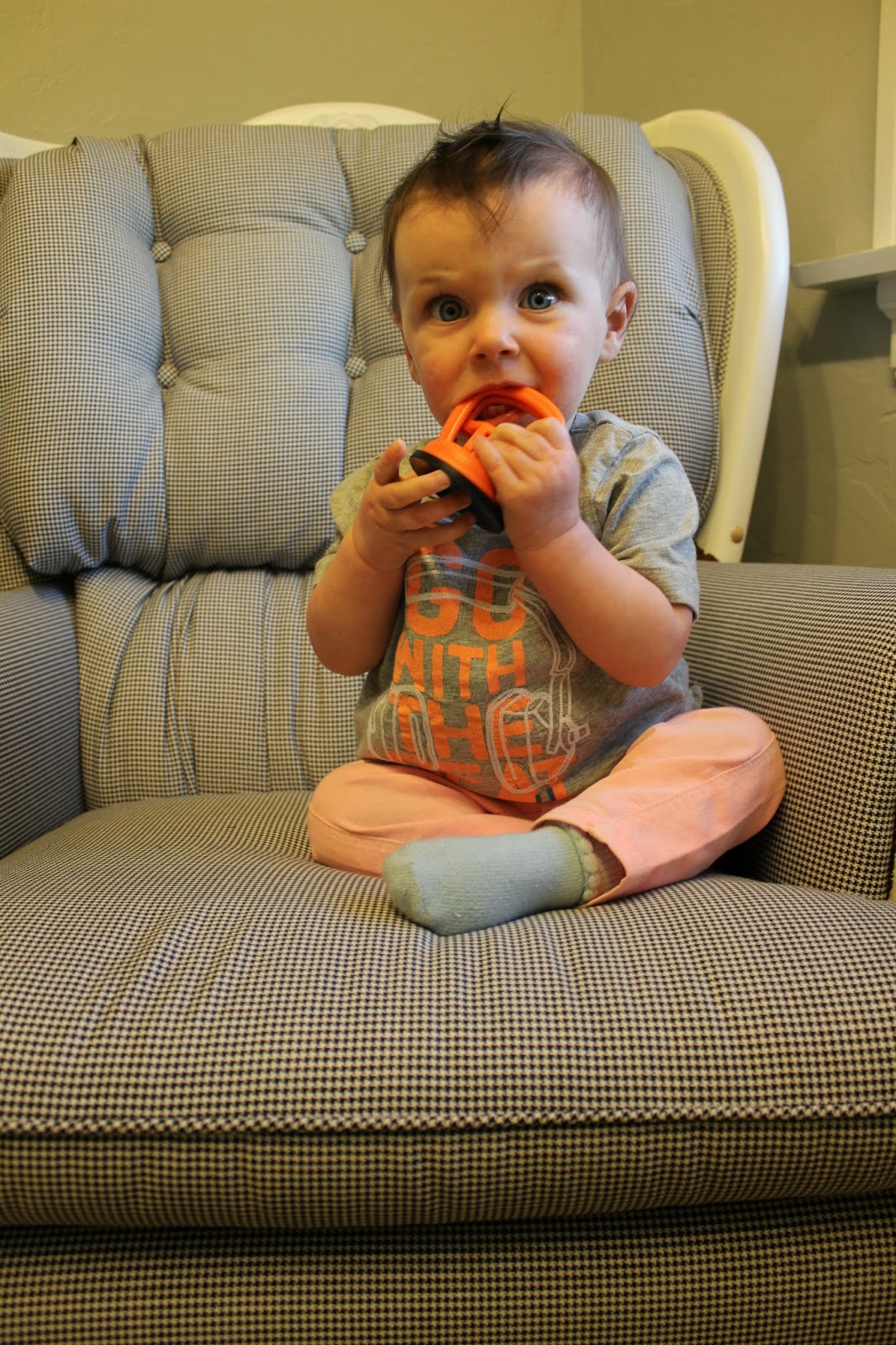 This month has been lots of fun and her personality is continuing to come out more and more. She still LOVES food (I gotta write that post…), she’s communicating more and interacting a ton. The sleep at night continues to get better and better, yay! And she seems very happy about that. Naps still are a bit questionable, but man, we’ll take what we can get!

The little lady still loves to go out and about. One of her favorites is going out to eat at restaurants, which is a good thing because we do that a lot. Chris and I tend to eat out more than the average couple probably just because we’ve spent most days running all around from client to client, so it’s a bit easier. Also, she’s got a ton of grandparents and family nearby and they all know how much she loves to eat so they like to take us out with her. Hey, I’m not going to complain about that 🙂 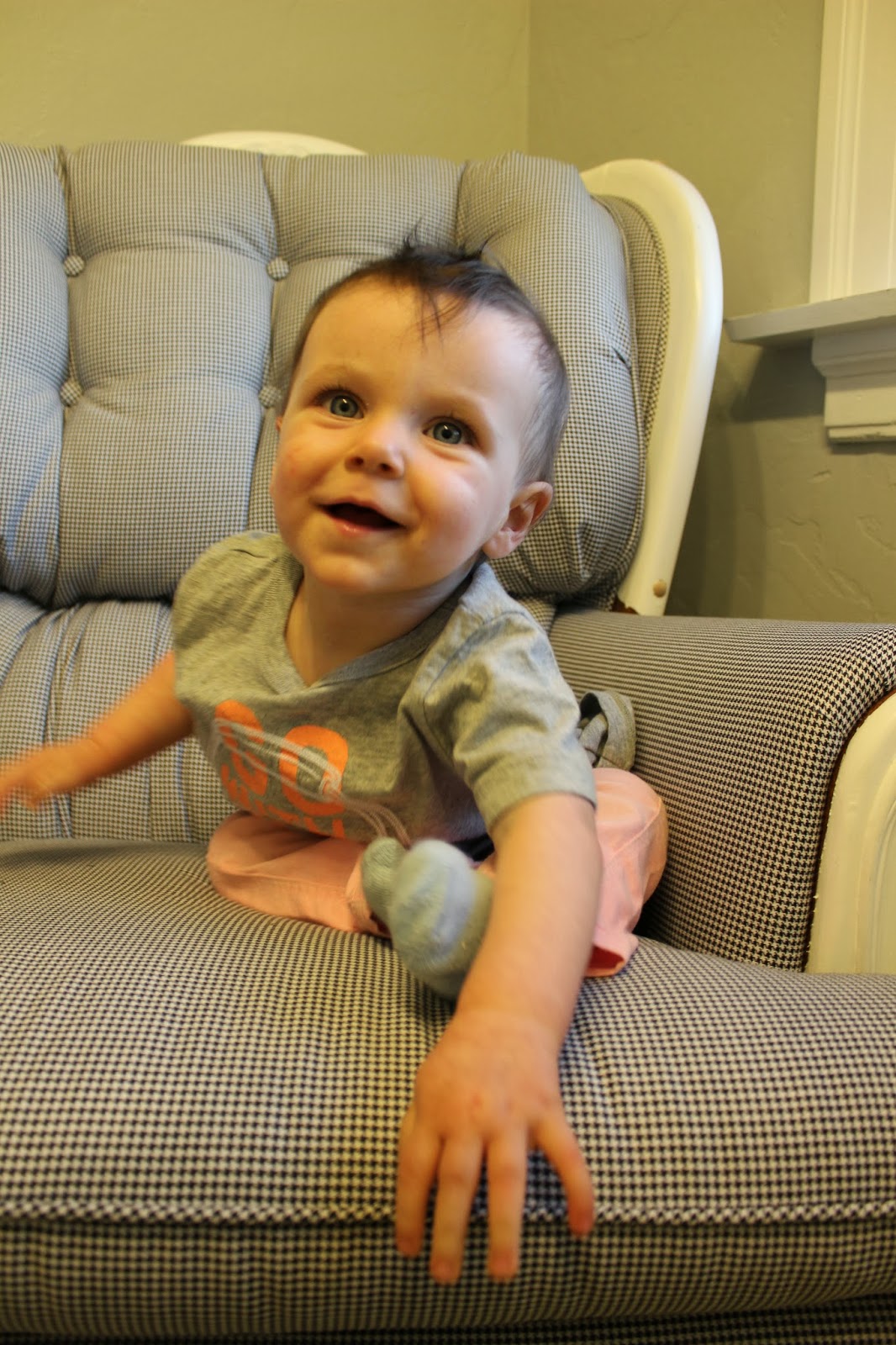 Zoe is a total ham at restaurants. It’s hilarious. She is also slightly inappropriate, but she’s a cute baby, so she should continue to try to get away with it while she can. Why is she inappropriate? Well, she loves to just STARE at people. And it’s not just a little glance, no it’s full on STARING AT THEM. Most people think it’s funny and smile at her, laugh, wave and makes comments about her not blinking (seriously, when she gets locked in she never blinks). If they’re not looking back at her she will politely grunt at them until they do. She never gets very loud because I guess she gets that they’re not interested. Sometimes people become her best friend. For instance, we were out at breakfast one day at a restaurant where the tables are very close together and this really nice guy was sitting behind us and Zoe was incredibly interested in him and he reached out to wave at her and she decided she would hold his hand. For a couple minutes. And then again later on in the meal. I politely apologize to people for her staring and her grabbing (I mean, you can’t really tell her not to do it, I think she just thinks everyone is her friend), most of the time they love it. The interesting thing is that she is very specific about who she chooses to do this behavior with. For instance, I was out to eat with my step dad and mom not too long ago and she had no interest in anyone sitting around us – coincidentally they did not look like super happy or friendly people (not much talking at their tables and sour looks on their faces). It was almost as if she knew they wouldn’t really be willing to be friends with her and in turn she had no interest in anyone at the restaurant.

She has also reached out and grabbed at strangers when I’ve been waiting on the corner to cross the street. I told you, she is slightly inappropriate 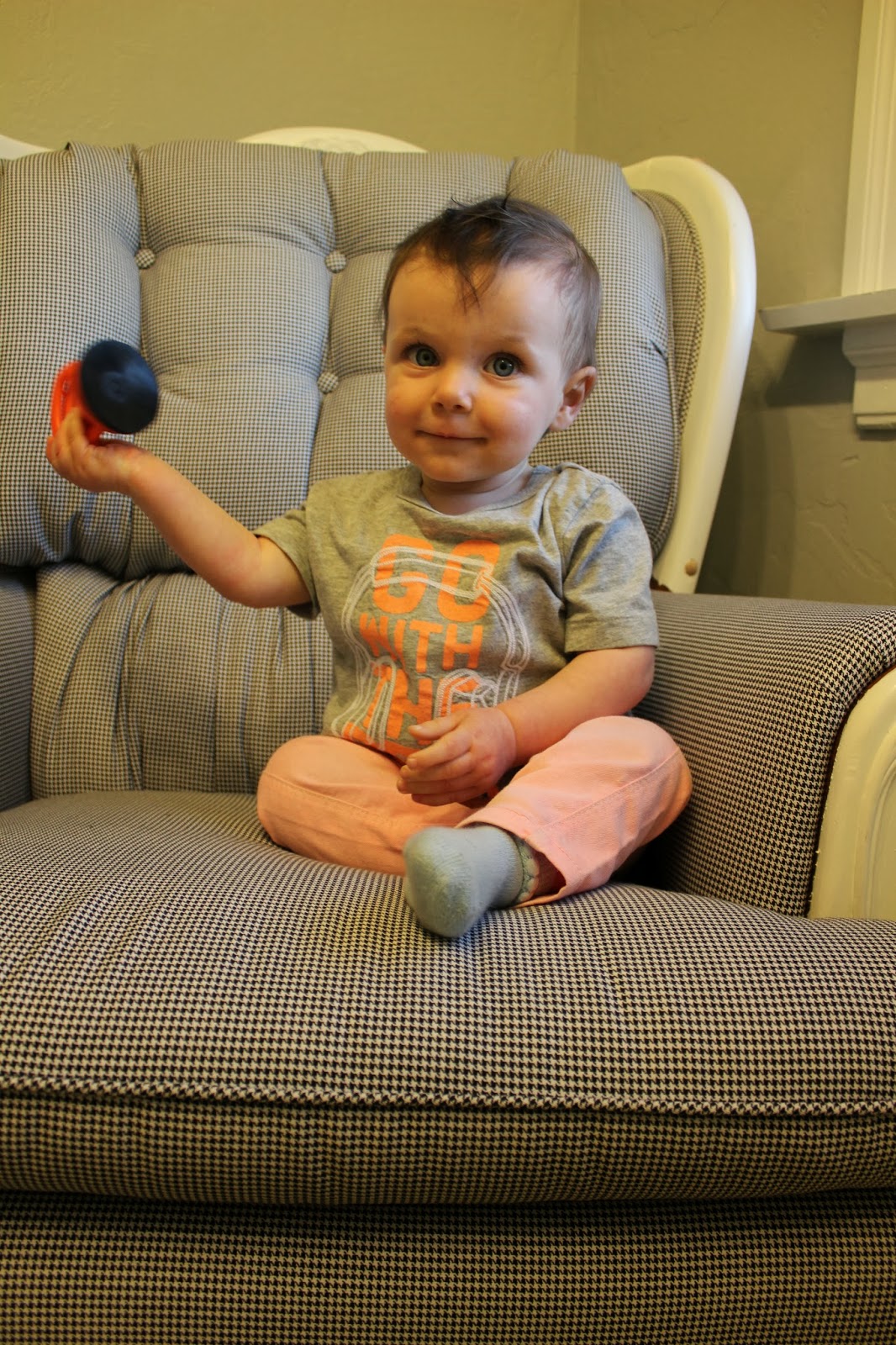 She still LOVES to talk and is learning to communicate a bit more. She knows how to sign for milk, so that is very helpful. When she started doing it I thought it was pretty awesome. All that pretending to milk an imaginary cow’s udder has paid off! 🙂 She also says “Ba ba” as bye bye and will wave. It’s pretty adorable. She doesn’t do it all the time, but it’s almost a guarantee when we go to the door to say by to Chris in the morning. She will wave to say bye to him and then say “ba ba.” She says “daddy” similarly, but there is a different inflection, so we think it might be two different “words” she’s trying to communicate.

She’ll also wave to herself. Which is very humorous. One time she was crawling on a box of diapers, saw a baby on the box and started to wave at the baby. I just about died laughing. Funny kid.

She LOVES big kids. Another time we were out to eat (I told you, we do it a lot) there was a little boy who was about 6 or so spinning around on a stool at a table next to us and she just thought he was the most fascinating person she had ever seen. She just stared and stared at him and followed him wherever he went in the restaurant. She tends to stare a lot at other kiddos playing 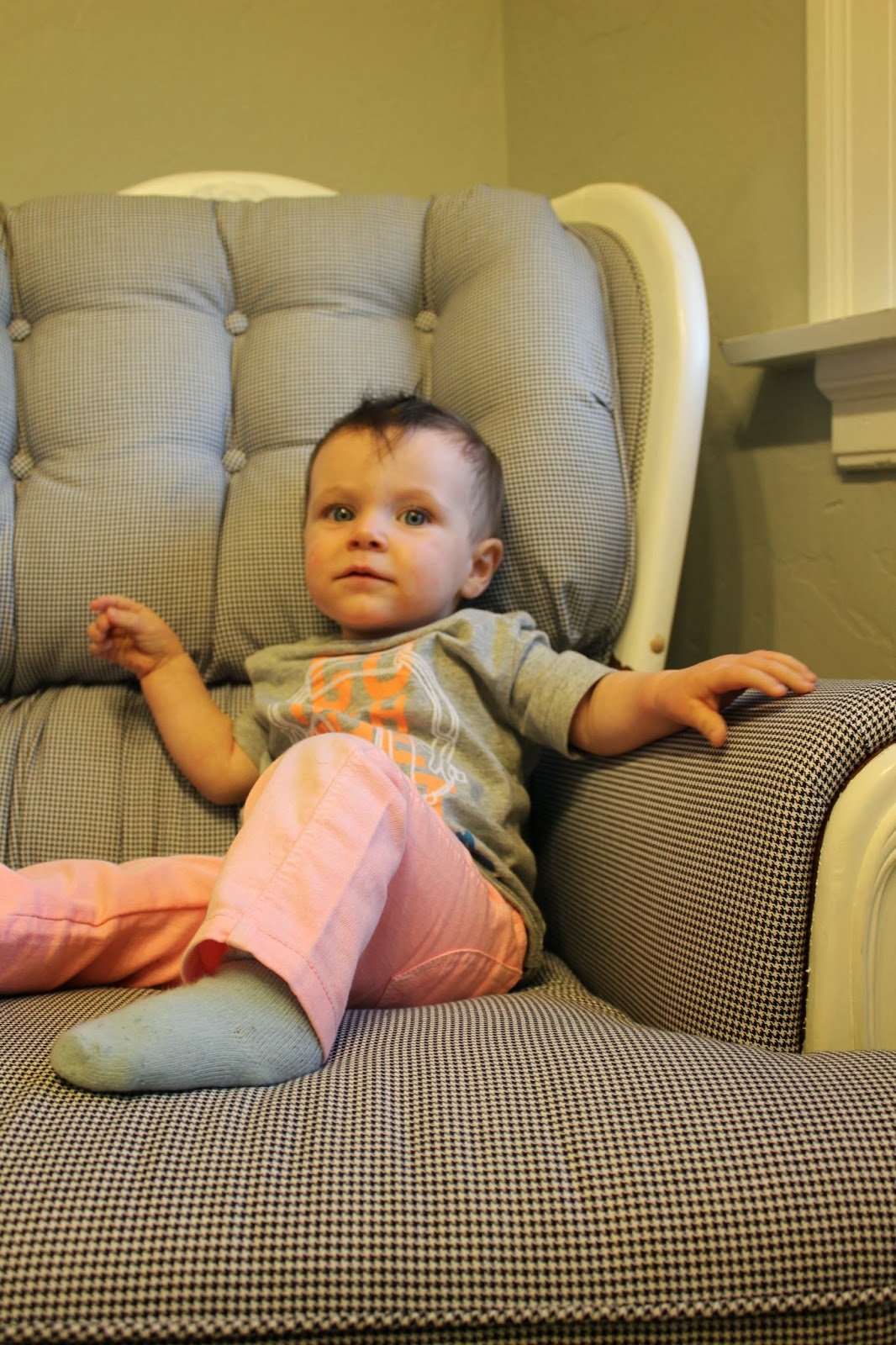 She’s got the crawling down pat and goes from room to room now on her own. I guess she’s finally starting to realize other rooms in the house exist that she’s not in. She’ll laugh at herself as she goes into another room, which is pretty funny. And strange 🙂 She finds it especially exciting if you crawl ahead of her and she can chase you. That gets lots of laughs. Even more when you jump out from behind the house and scare the shit out of her. She finds being scared very funny – she jumps and then laughs and laughs.

She’s still pulling herself up on everything. Twice she’s stood on her own for a couple of seconds before she went splat on her butt. I’m thinking we’re about a month away from walking. Though she tends to like to “walk” down the stairs (we just have 2 steps down to the front room). She’s great at getting up them and decided the proper way to get down them was to go headfirst, but for some reason she’ll sometimes stop at the edge of the stairs and grunt at you with her hand outstretched as if to say, “Help me.” I’ll walk over to her and grab her hand and then she’ll try to pull herself up to standing and “walk” down the stairs 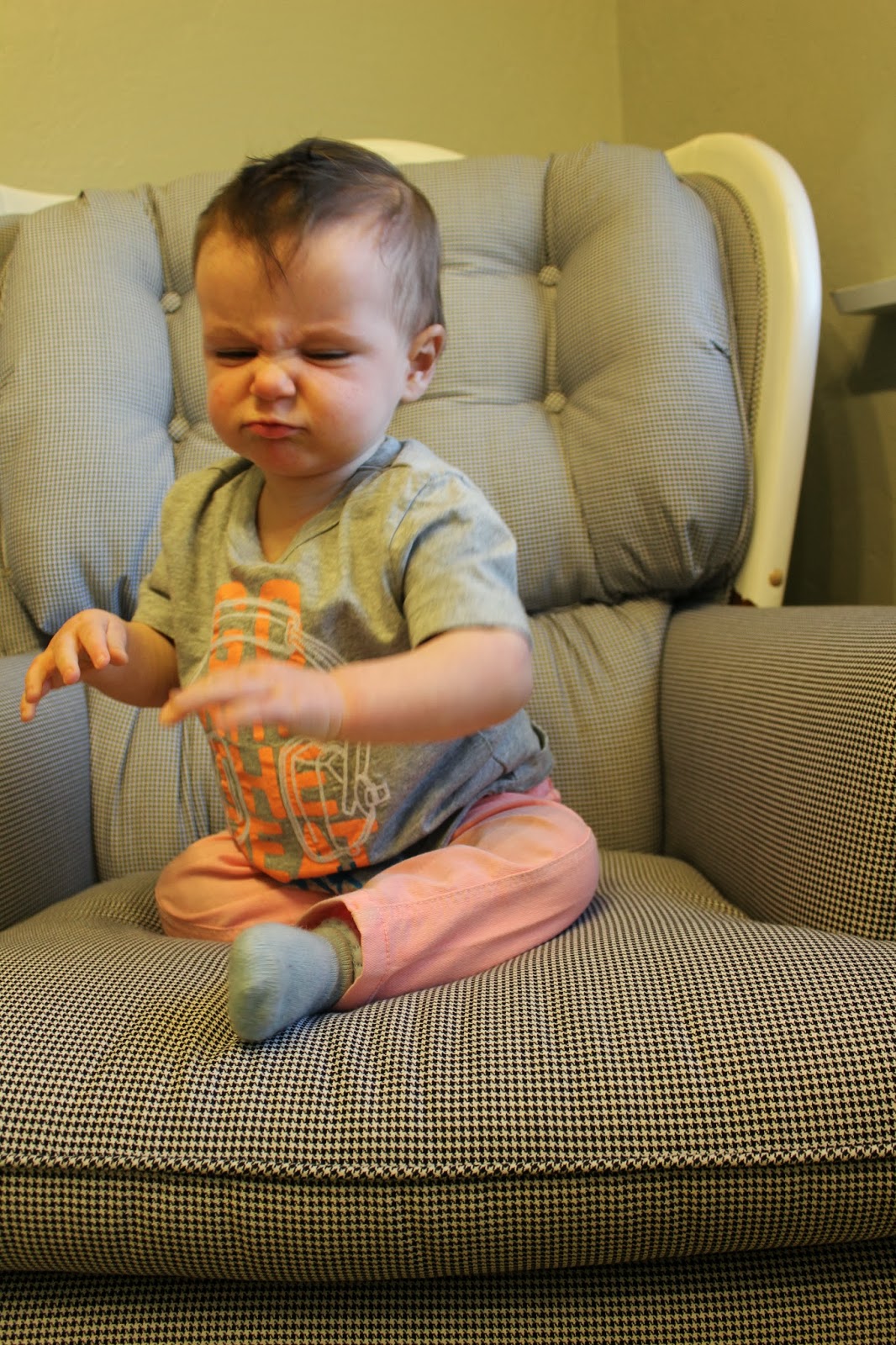 Yesterday was her 9 month check up, and I gotta say, I always get really excited for check ups because we get to see how long she is and how much she weighs. At her last appointment she was 100% for height and 67% for weight (long and lean) and this time she measured out at just about the exact same percentiles: 30 1/4″ (100%) and 19 lbs 7 ounces (67%). She’s got a big ol’ head too (90%). She’s mostly in 12 month clothes now and some of her onesies are 12-18 month (she’s got a long torso). She’s our big girl, that’s for sure! I was really long when I was born and then was very short all through childhood – usually the shortest, or one of the shortest – up until I hit high school, so I find the fact that she’s a string bean very exciting. She’ll have a whole different set of problems – I could never find pants short enough (thanks for my stub legs dad), and I’m sure she’ll have a hard time finding pants long enough

So that’s life with this little 9 month old: lots of fun, laughs, talking and eating. Sounds just like me 🙂 Love ya little one! 🙂

« Checking in on the Sod
Our Neglected Front Yard »