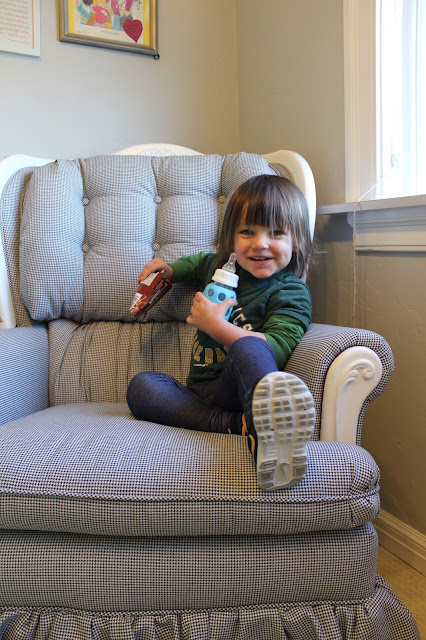 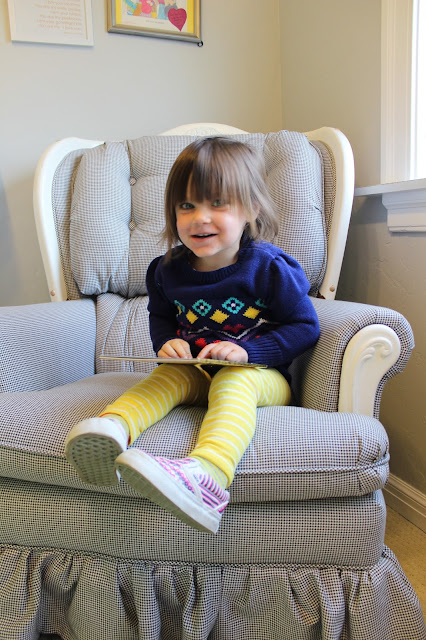 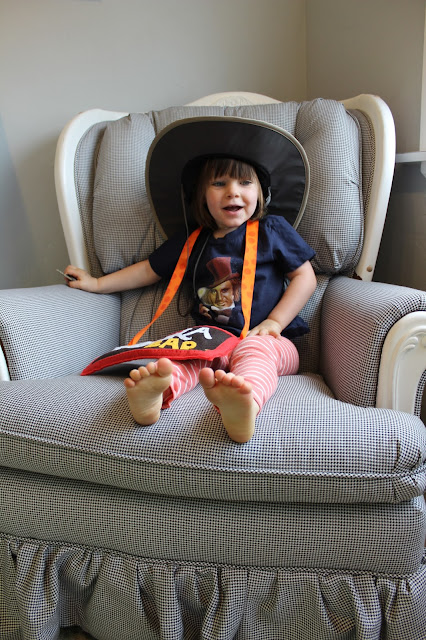 That kid is so cute I can’t take it 🙂

This past Saturday was Zoe’s official 2nd birthday. And because last year was pretty eventful, we decided to keep it a little more low key this year. What does that mean? Well, in the morning we went to a local regional park to ride the merry-go-round (one of Zoe’s absolute favorite things to do) and then in the afternoon/evening we went to a local ice cream place that’s been around 100+ years for dinner and “i-ceam!” We invited just our parents, siblings and Chris’ aunt and family who live in town. It was a pretty splendid day. 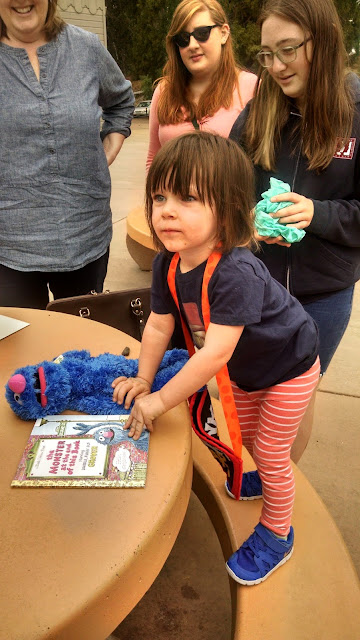 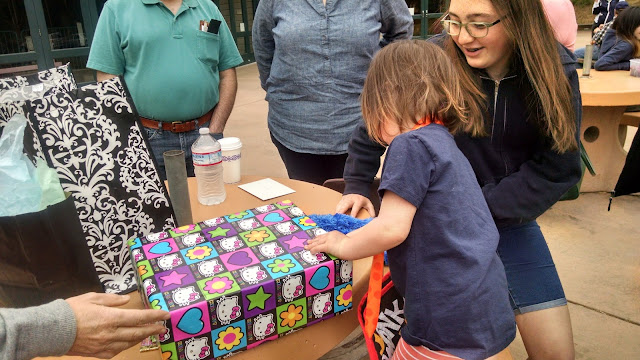 Chris and I try not to get her too much stuff for her birthdays. We try to encourage family to get her memberships (to the zoo, etc.) and lessons (tumbling, swimming, etc.) or books as things she can enjoy for longer. And, let’s be honest, kids like all the pens on your desk more than the actual toy you buy for them.

But she is OBSESSED with Willy Wonka, so we bought her a shirt (which she didn’t take off for 2 days) and I made her a wonka bar purse. She always asks, “I wonka bar?” and she likes purses (when she sees me taking mine out when we leave she says “my purse?” and usually grabs a little A’s one she has), so I thought she would like it a lot. I made it out of felt and hand stitched everything (because I’m a moron) – it took me 4 nights of 2 hours each, but she loves that thing, so I consider it a win 🙂 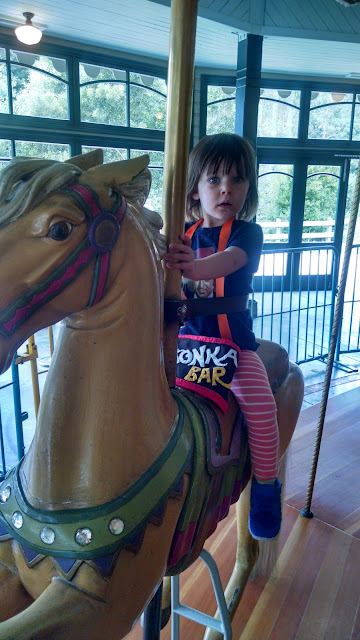 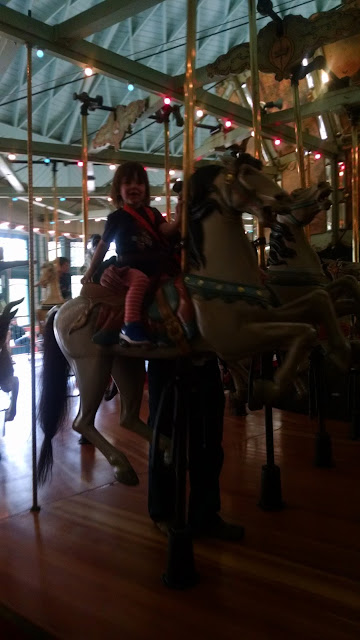 We tried super hard to keep her away from the TV until she was 2, but relented at about 20 months or so. That was in the midst of MAJOR temper tantrums, cranky behavior and Chris and I were dying. Our challenge with Zoe has always been about trying to slow her down a bit and get her to rest. She is always running everywhere, never stops, goes to bed later/wakes up earlier/doesn’t nap long than we would like and so I know she is super tired. People say kids sleep really well when they have an eventful day and you tire them out. Eventful days are the WORST with Zoe and she sometimes stay up till 9-9:30 dicking around her room on days when there’s lots of excitement. We finally started using the TV as a pause button for her. I feel a little bit like a bad parent for doing it sometimes because I don’t want to replace good parenting with letting her sit in front of the TV, but some TV in a day is okay because it gives her a moment to sit still and relax. Otherwise she is literally bouncing off the walls the entire day.

We’re pretty specific about what we let her watch. I really dislike most kid’s programming on TV nowadays and cannot stand the sight of it. She likes watching sports (hooray!) and this kid can seriously not get enough of Willy Wonka or Cinderella. Amazingly obsessed. We tried Aladdin, Beauty and the Beast and Snow White and each took her many, many, many sittings to get through (although she never finished Snow White) and she repeatedly asked for Willy Wonka or Cinderella while she was watching them. Mary Poppins is starting to somewhat enter the rotation as well. 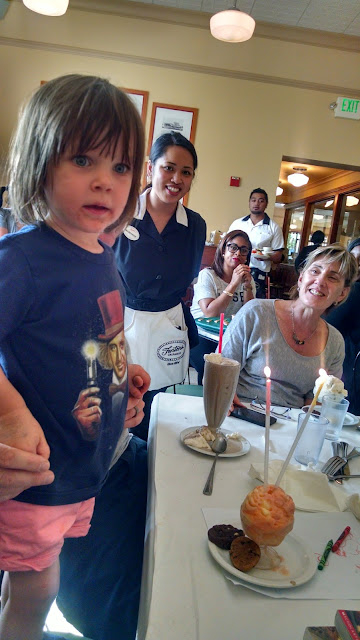 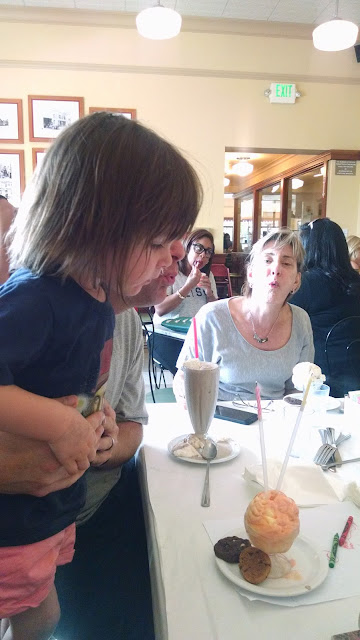 Sleep is still our big challenge with her. We try to get her in bed by 7:15, but she usually messes around her room till about 8:45. Then she’s up around 7:15 again normally. Lately she’s been getting up closer to 8 because she’s been messing around till sometimes after 9. I try not to let her sleep that long in the morning because I don’t want her sleep schedule to get more messed up than it already is. Nothing we’ve tried (routine, taking things away, ignoring her, going in, etc.) seems to help her fall asleep at night. She just wants to play by herself. We’ve debated keeping her up with us longer, but those nights she’s a DISASTER because she’s really tired and cranky, so that is an epic fail. I think she just likes personal time to recharge, and I can’t get mad at the girl for that.

We’ve started taking her to tumbling classes which she really seems to like. She tries to do somersaults on her own at home and gets really proud of herself when she sort of completes one. It’s highly adorable to see. Possibly THE BEST thing about tumbling is the parachute at the end. I don’t know what it is about kids and parachutes, but they love them, don’t they? I remember really liking that activity at PE when I was little. They also get stamps at the end of class and Zoe adores that and usually grabs any stamp she can get her hands on and stamps all over her body. The most I counted at one class was 17. “Stamp!”

Tumbling class also started her love of songs. Well, not started it, just continued it. She has always had a habit of singing or humming to herself when she was waking up in the morning or getting up from a nap, but we sing “Twinkle Little Star” at tumbling while playing with the parachute and Zoe thinks that’s fabulous. Now whenever she sees a star in one of her books she sings the song to herself. She’ll also ask you over and over again to sing it to her 🙂 She’s a big fan of “yo ya yo” which means “Old McDonald” that her Nana enjoys playing for her. Zoe could sing “Moo moo herrrr, moo moo herrrr” for hours. 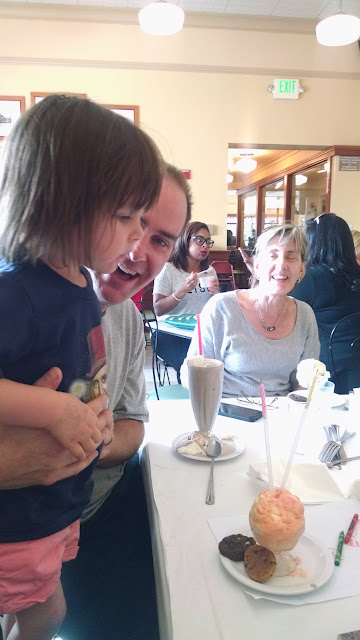 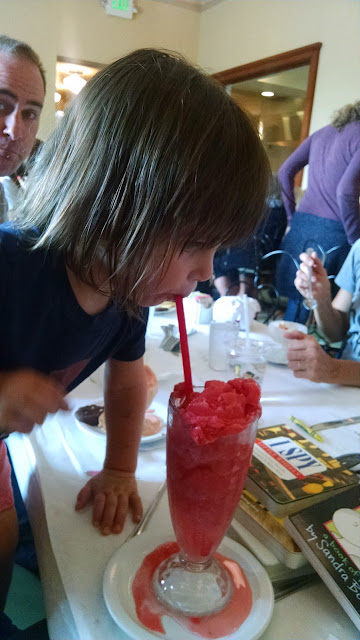 I also love how much she continues to love coloring and books. Those are two activities I love doing with her. Her favorite thing to draw is a “himey hace?” – or a smiley face. We have pages and pages of paper with smiley faces we’ve helped her draw. I save some of her works of art, but try to reserve it for about 1 in 15 that she makes at this point because she colors so frequently I would have about a bankers box full already. She doesn’t seem to show a preference for colors, but likes identifying each one as she’s telling you what she’s drawing.

And her love of books that started very, very young continues. Usually in the morning we let her hang out in her room by herself for 10 or so minutes. She can be a little cranky sometimes in the morning, and letting her have some time to herself is usually really helpful. She likes to roll out of bed and take her books off the shelf and read through them. She’ll recite certain parts of them to herself and it’s pretty cute to watch. I love going in there in the morning and spending time reading with her. If we don’t have anywhere to go (no day care or grandparent’s house to go to) sometimes we’ll spend 30-45 minutes reading through her books. It’s time I really, really enjoy. 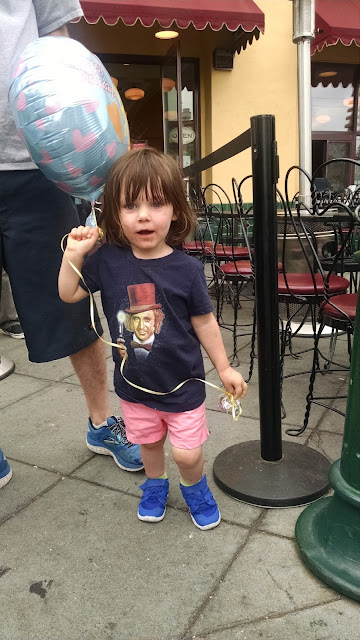 She’s fairly orderly about how she arranges her books while we go through them also, which as an OCD sufferer is a little humorous to see. She either likes all her books to be all over the ground not touching each other at all, or neatly stacked into piles. It’s pretty funny. I know lots of kids have certain orderly things they like to arrange, so it’s interesting to see what hers are. I don’t know if she’ll grow out of it or not – I hope she does because I have a lot of really strange OCD behavior that can be a burden at times and I sort of hope she doesn’t suffer from the same affliction. 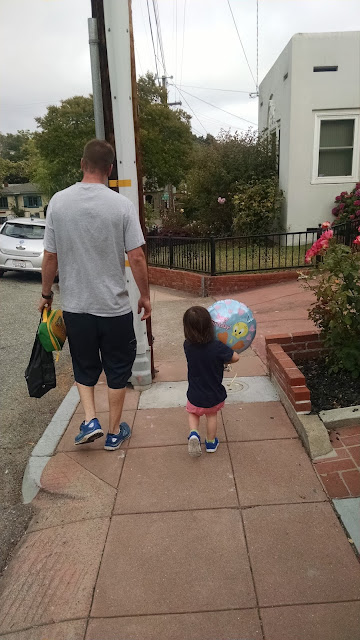 I think one of the most amazing things to have really watched these last 3 or so months is how much of a kid she is now. She speaks in abbreviated sentences, can communicate what she’s feeling or needs and has started to really have a sense of humor. She likes to play little “tricks” and be silly and is REALLY starting to ham it up with people. That was especially true on her birthday when she had so many people she loves around – she was just making the funniest faces, trying to get people to laugh, and just engaging so much with everyone. Her love of people has never gone away and I absolutely love that about her. She really likes to make people happy and have a good time. If she senses that someone is upset or hears someone cry she asks, “Hug? Feel better?” and will frequently go over to the person and give them a hug. It warms my heart so much.

The talking is pretty insane. It’s so weird to think that a year ago she had maybe 10 words she could say and now she can speak in abbreviated sentence form. Childhood development is amazing. The other day I told her she was being funny and she said, “Why? Because I’m funny!” She loves to be funny, say funny things, tell you that something is funny, and be perceived as funny. Humor is important to this girl, and smiles in life are always appreciated, so you really can’t go wrong with that. 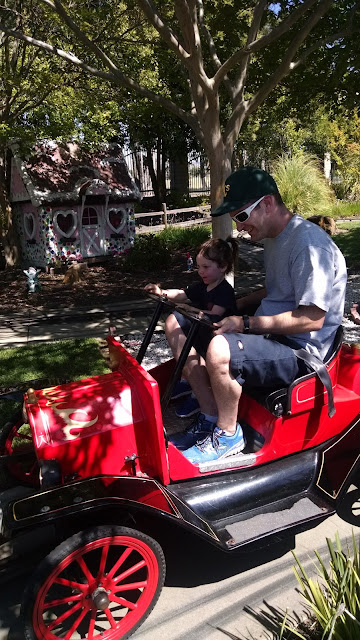 Well, there we have it, our little 2 year old girl. From now on I figure I’ll do an annual update, but she’ll still always make appearances around here – how could she not? What’s crazy is in 2 weeks we’ll have another little nugget enter the house also. We talk to Zoe about being a big sister a lot and although I’m sure she doesn’t logically understand it, she will hug and kiss my belly, so hopefully that love for her little sister continues. Mostly 🙂

« Little Football’s Artwork is Complete. And I Love It.
Before & (More “In Progress”) After: The Long Awaited Post of My Parent’s House »