3 weeks ago was Zoe’s first baseball game. And it was awesome. A lot of people asked me why I didn’t take Zoe to her first baseball game last season, and the answer was simple: my dad and I have a tradition of going to Opening Day together and have for many, many, many years and I wanted her first game to be on Opening Day because that day is always special to me. Zoe of course will not remember it AT ALL, but it’s a special tradition with my dad and so I wanted it to be memorable.

We didn’t know what the weather was going to be like or how she was going to do, so Chris and I were a little nervous. We decided it would be best to take two cars in the event that Zoe had a freak out and so Chris could take her home and I could stay at the game with my dad. After all, her bed time is 7:30 and the game was scheduled to start at 7:05.

And then there was the fun of the weather. It had been super rainy for a couple days before and it was supposed to be rainy again. We really wanted to tailgate, but with a little tyke making the trek with us we decided at the last minute we would eat at the restaurant inside the stadium. That didn’t save us from the pouring rain that showered us while we were waiting to get in though 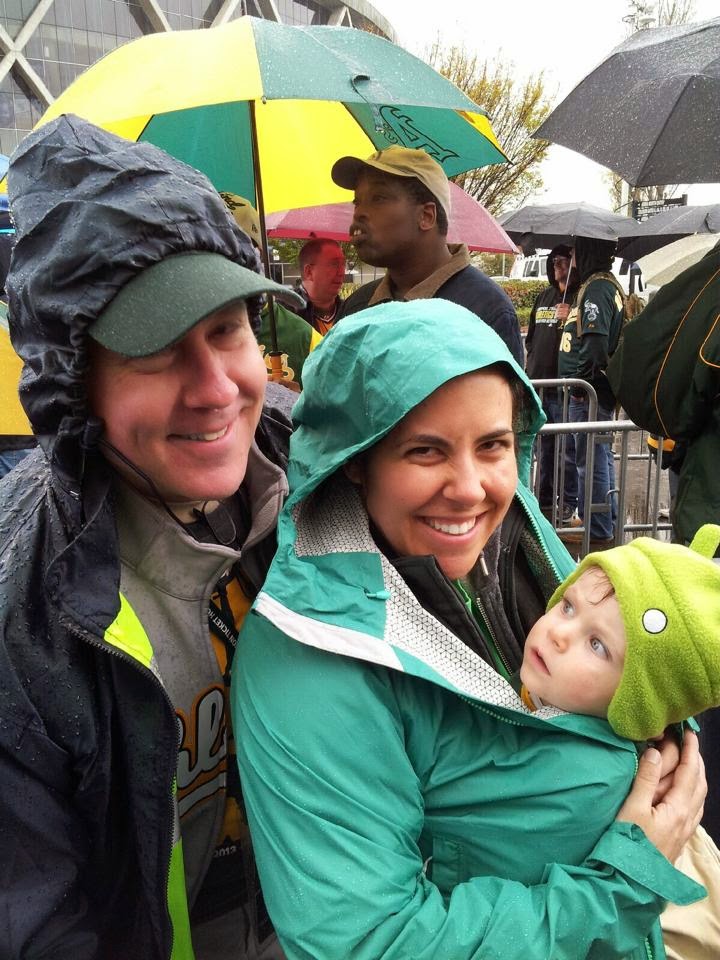 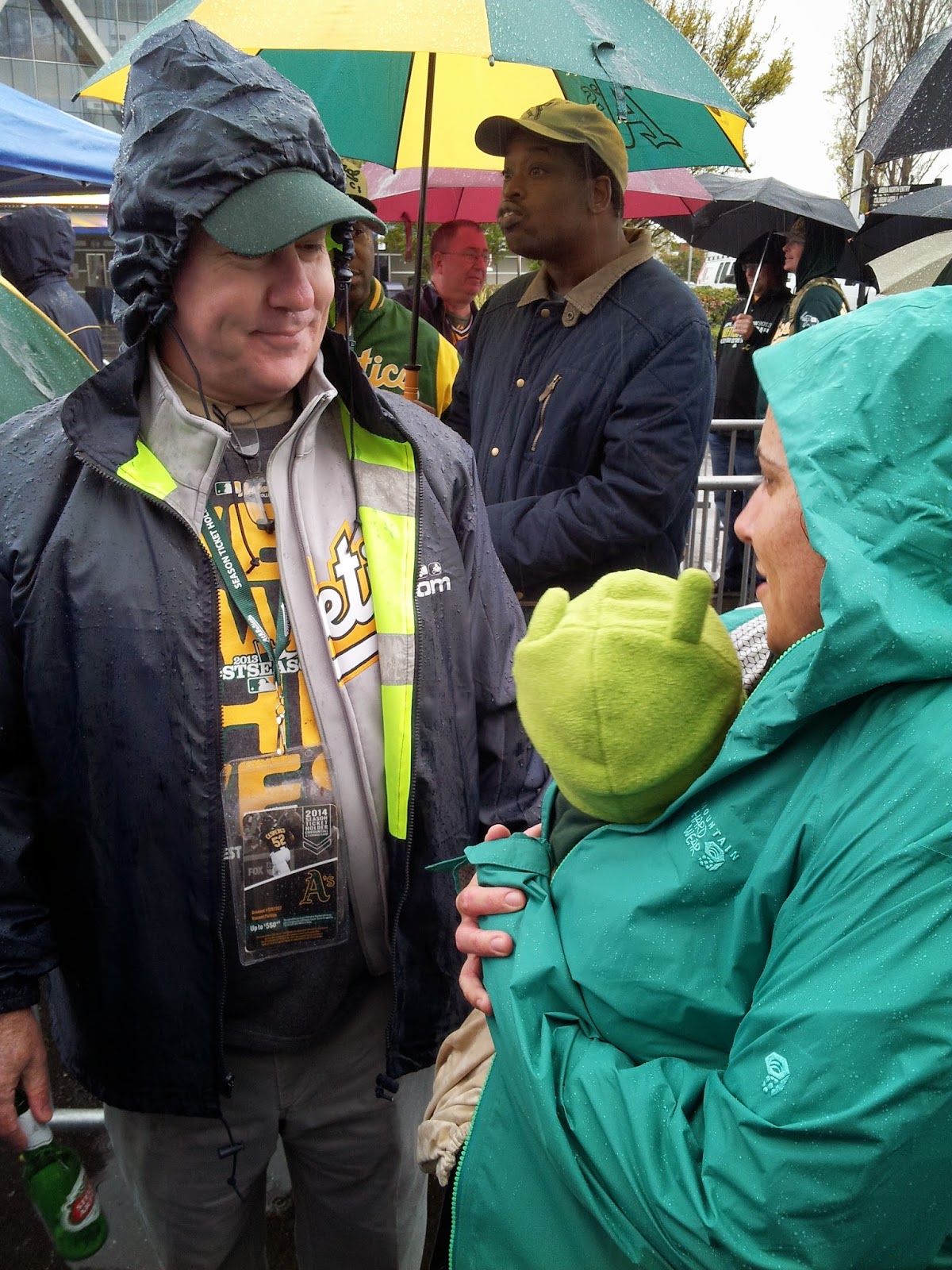 It was actually kind of astonishing how well she did while getting rained on. I had my jacket that was waterproof wrapped around her (and it wasn’t cold, just wet) and even though her head and face got soaked, she had fun gabbing away, pulling at my drawstrings and snuggling while we all waited in line.

Then of course it was off to eat dinner, which is always a fun time for Zoe 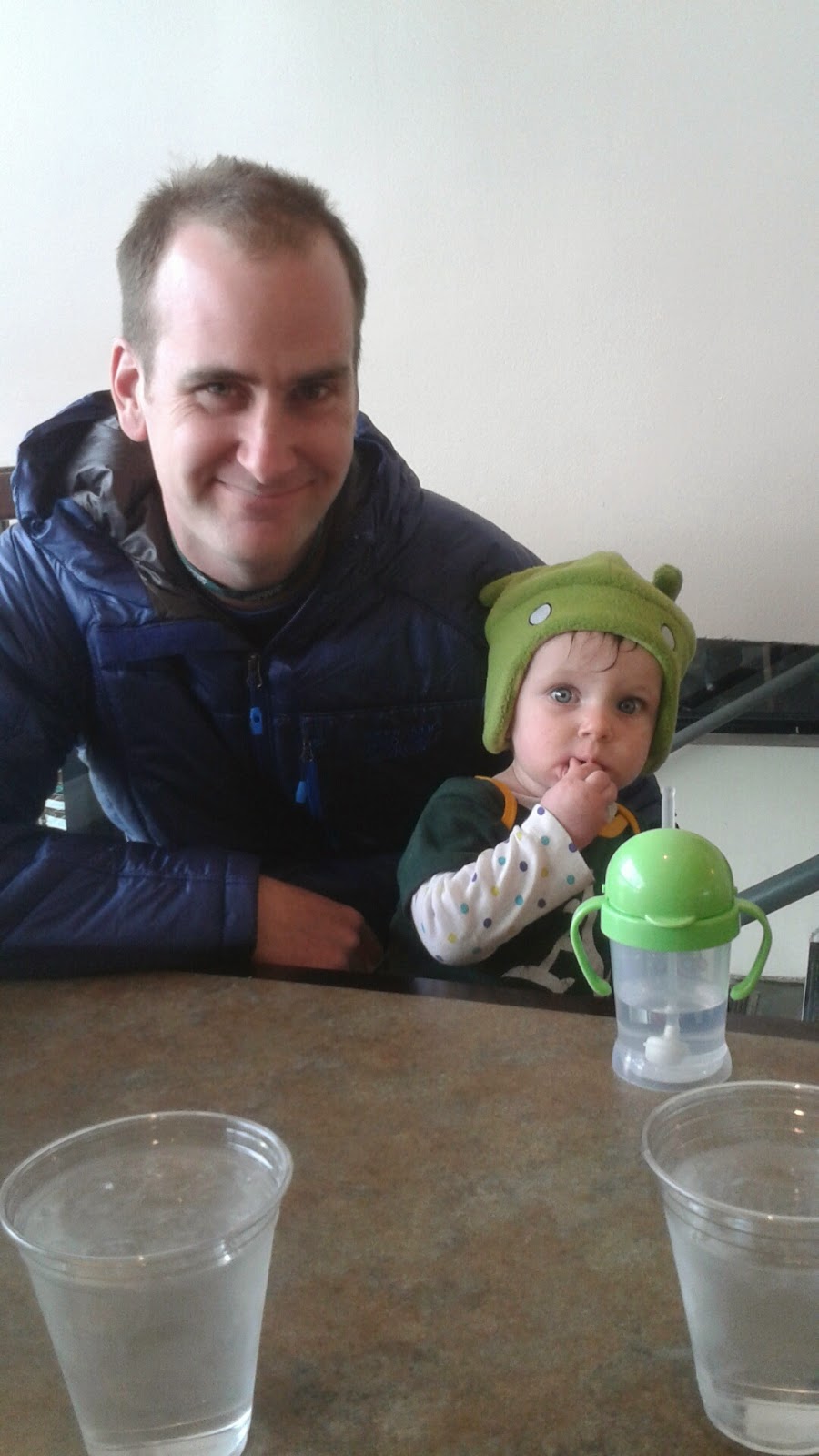 We brought lots of food to keep her occupied for dinner and throughout the game (especially because we didn’t know if she was going to stay awake and get more hungry). She was super good while we ate dinner and had fun watching all the people walk by.

Then it was time to find our seats. I was a little nervous for how the game would go – would she get cold? Would she get sick of being in the Ergo? Would she have a fit or meltdown? But we just went with the flow and from very early on she was mesmerized 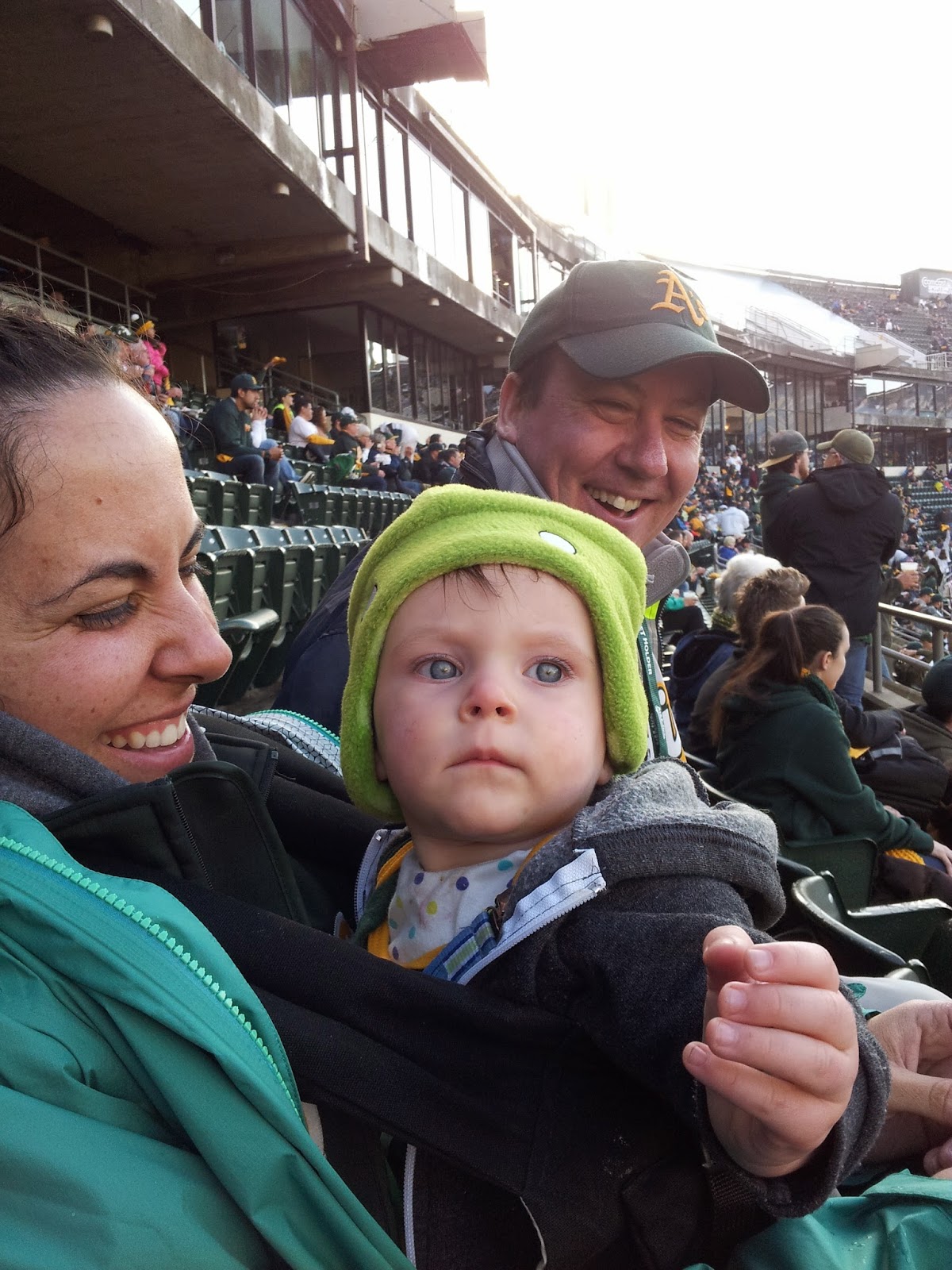 It was fucking HILARIOUS how serious she got when we found our seats and waited for the game to start. She needed to survey everyone, check things out and make sure everything met with her approval. She LOVED the rally towels they handed out and decided that when people swung them around they were waving and so she waved all around whenever she saw them flying in the air. It was pretty funny. She of course made friends with people sitting around us and smiled and tried to play with them. And she actually had a pretty good time watching the game. Upsidedown 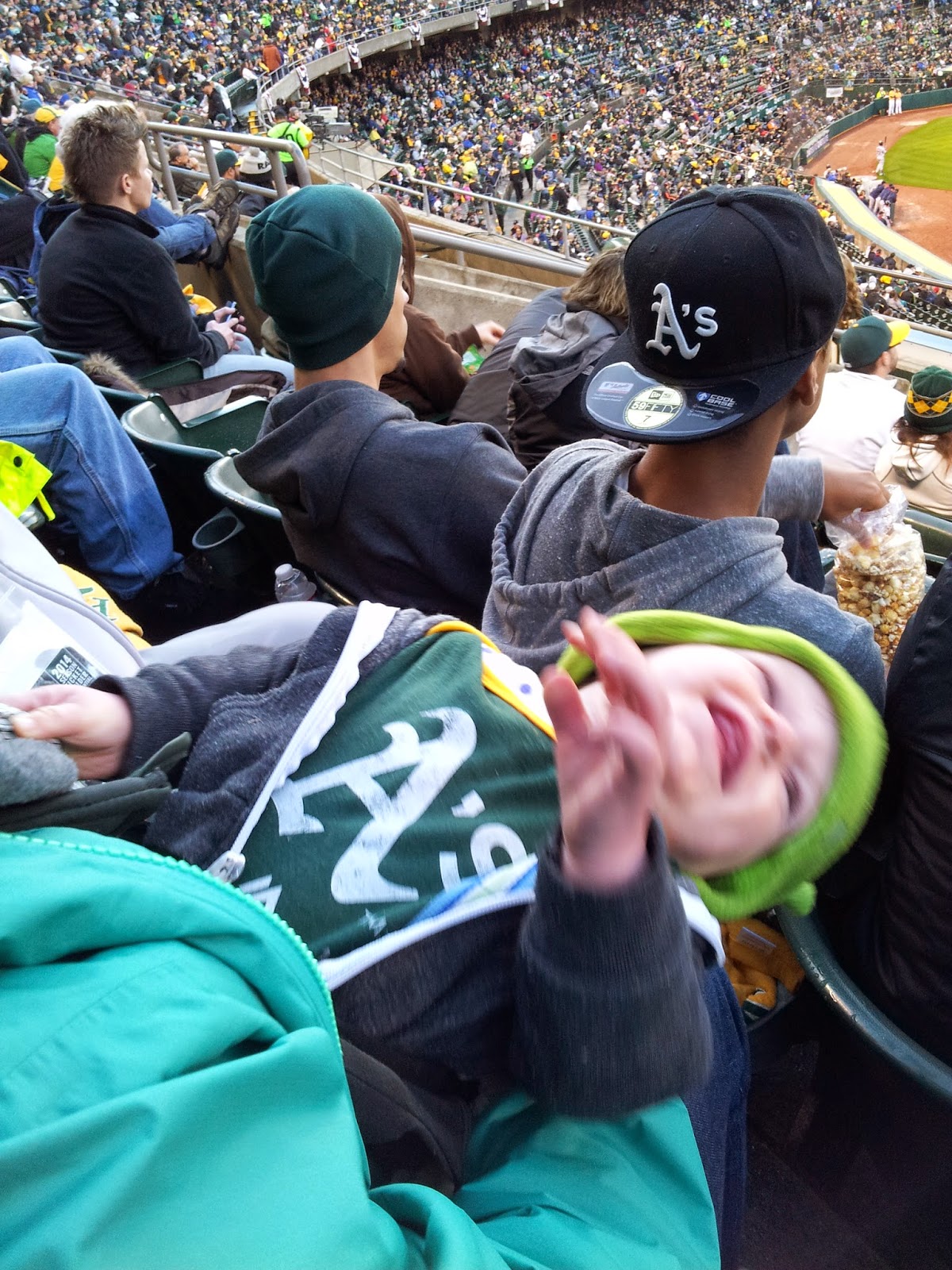 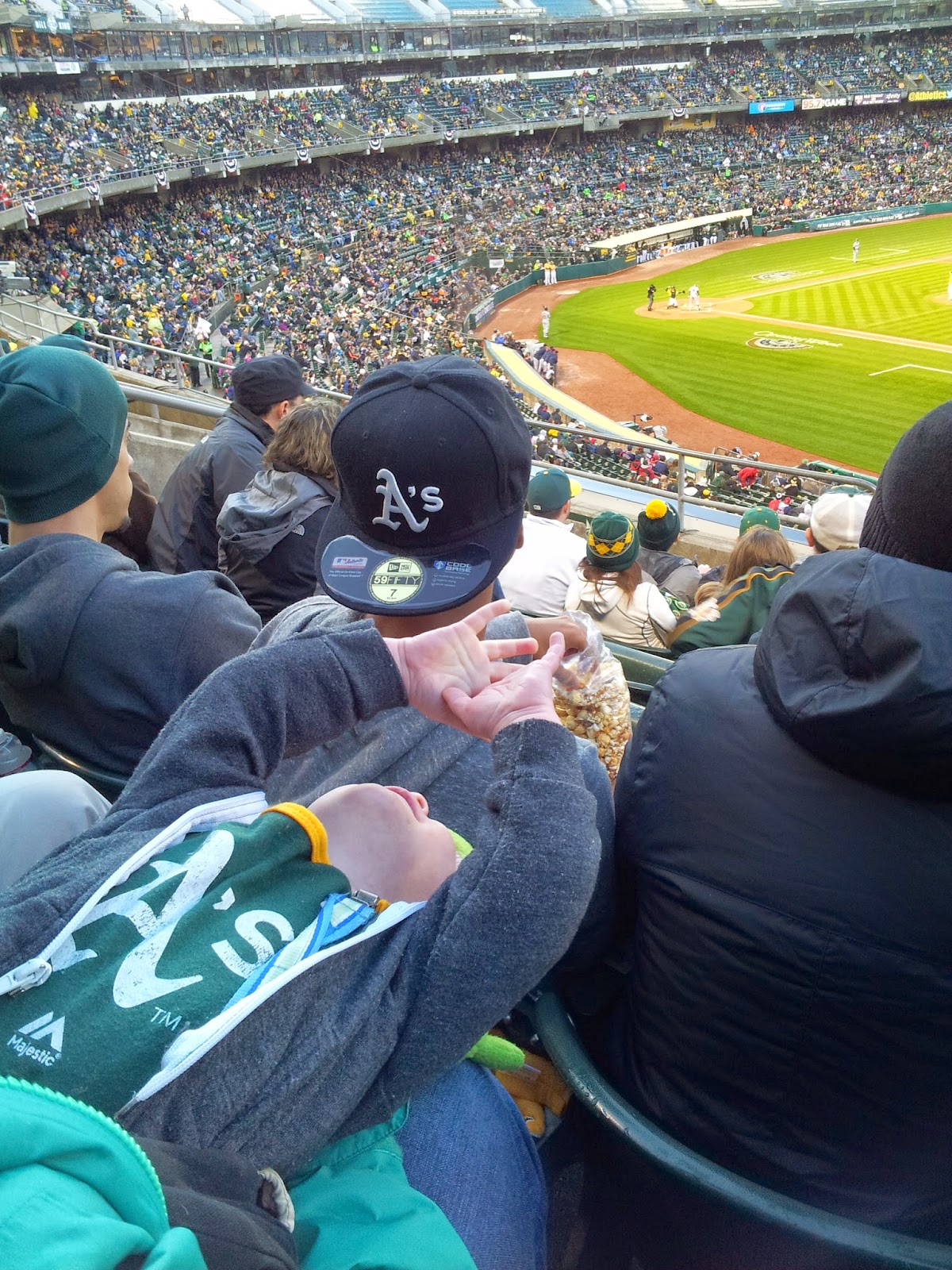 The fireworks and cheering didn’t bothered her once, she just soaked it all in.

She was awesome all through the first 3-4 innings, then we could tell she was getting tired. I was nervous what would happen but I just wrapped my arm around her, let her hold my other hand and she drifted off to sleep (she likes to snuggle like that in her Ergo when she’s tired) 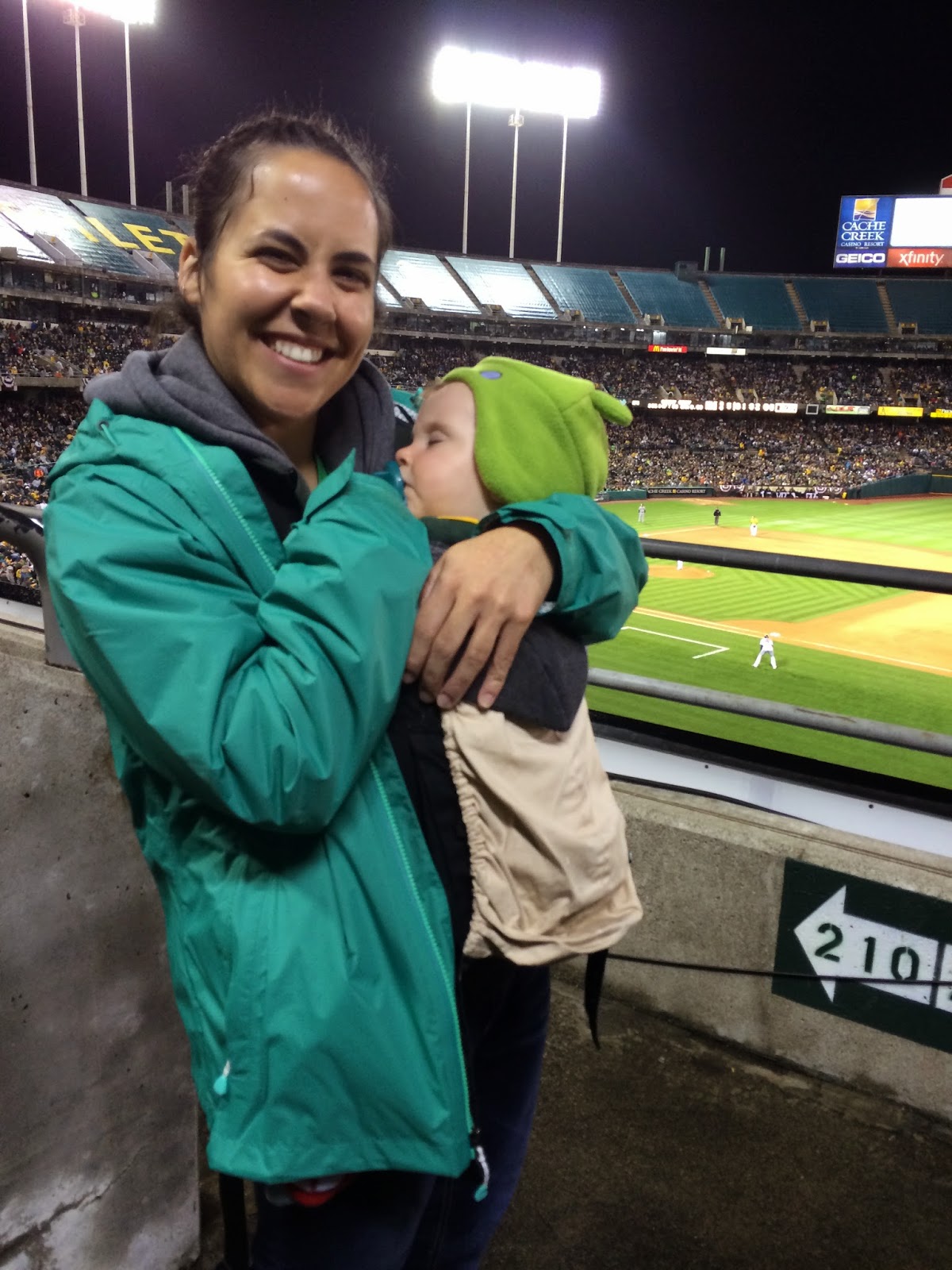 She totally crashed for about 3 innings 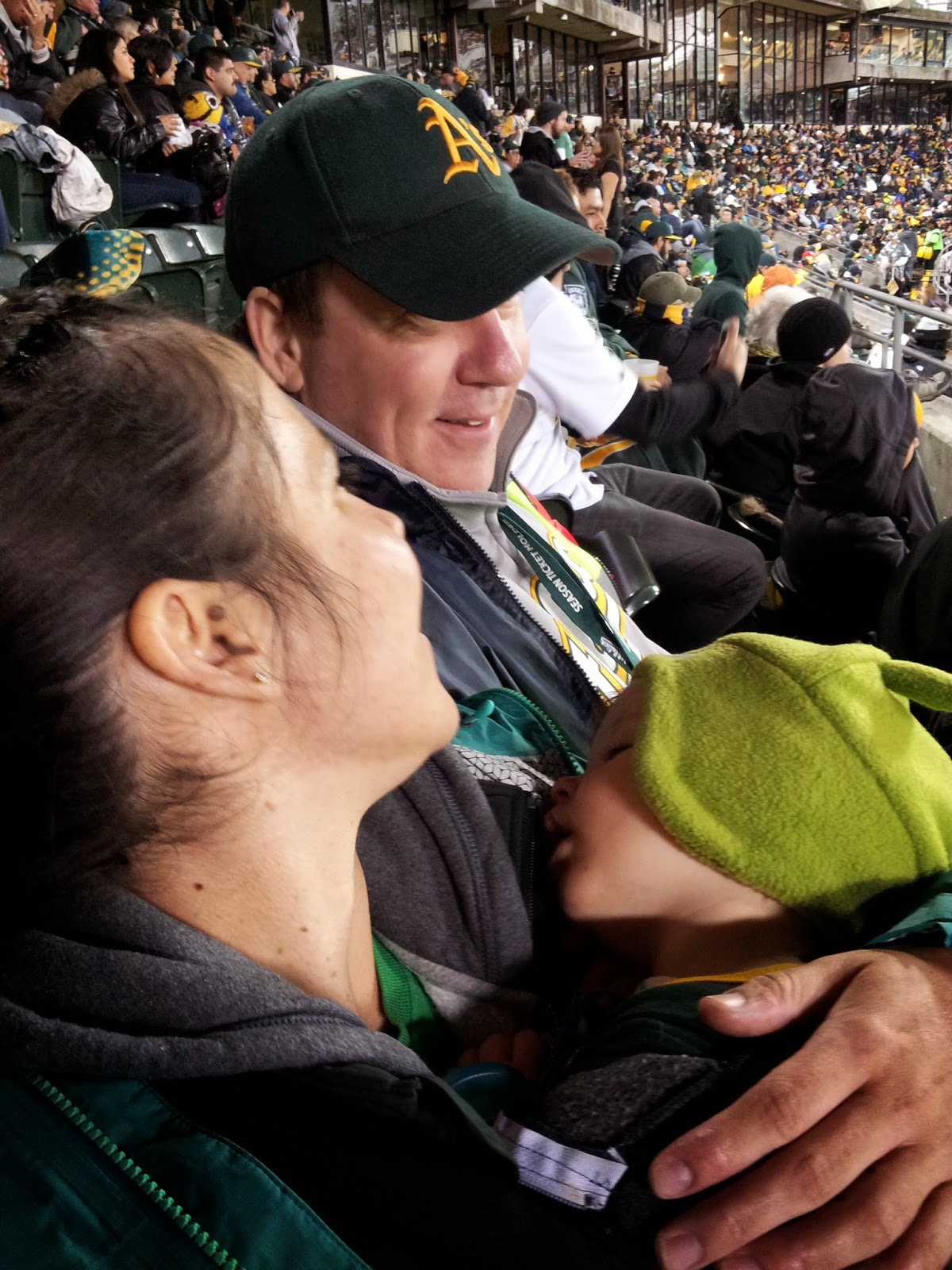 But that didn’t stop me from introducing her to Stomper 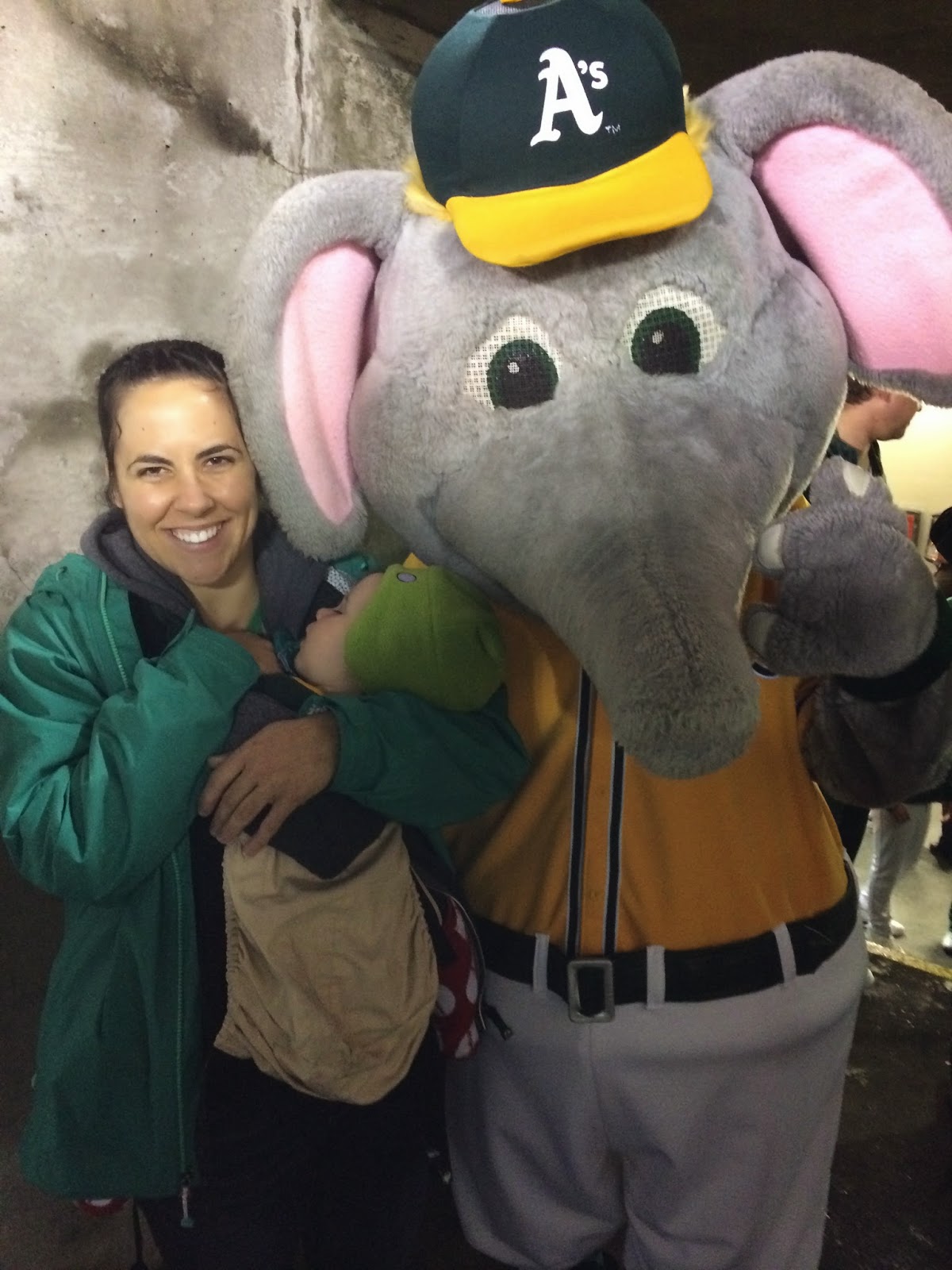 I wondered how long she’d sleep for and she lasted from about the 5th to the 7th inning and popped right awake during “God Bless America.” She didn’t fuss or anything – which I was super happy about. It was more like she woke up from a nap and was ready to go again. She waved again to the rally towels, tried to make everyone sitting around us her friend and was just generally a smiling, happy little baby 🙂

She made it through the whole game and although I was hoping her presence might bring good luck and break the A’s home opener losing streak of 10 years (ughhhhhhhh), they still lost. But I could not have been prouder of my little lady. She lasted the whole game, waved all around, tried to make friends, had fun looking at the field, fussed only once and was a trooper while getting rained on. I honestly could not have asked for a better first game from her. Obviously she’s an A’s fan for life.

« Some More Nails and My Ring
The Pantry is Painted »