This post isn’t very exciting, but it does describe 2 little things.The first: about a month ago while I was scraping the garage Chris completed a little task that has been on our sort of to do list. You know that list of things you kinda want to do, but you know there are way more important other things to do? But this was a teeny tiny task that took him about 90 minutes, so it wasn’t a super big deal.When we put in this flower garden a couple years ago we made a nice little border with bricks 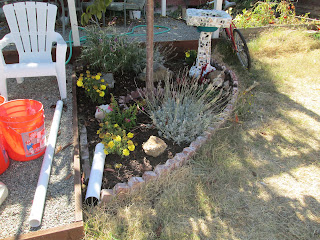 But we always wanted to lay another row flat against the ones that were angled to make a nice edge to run the lawnmower against (because we are so good at mowing the lawn). We had some leftover bricks from other projects (not the front porch ones, these ones are slightly smaller) so the cost of the project was $0, which is always a nice thing to hear. And while I was working hard scraping lead paint off the garage, Chris laid them all out 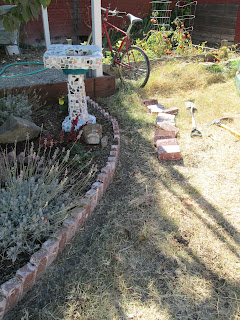 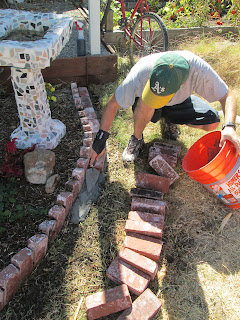 He wasn’t crazy precise or nit picky because in another month or so the bricks will be mostly covered with weeds (I mean grass) that we never mow. But when he was done, it looked pretty good! 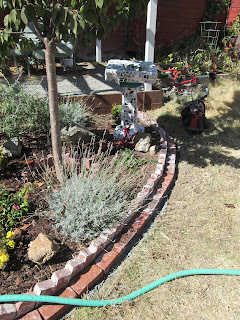 The other little item was getting a rug for our bedroom.When we first moved in we hated the redish stain of the bedroom floors that existed no where else in the rest of the house, so we covered it up with a free finished edge piece of leftover carpeting from a friend. Sure, it hasn’t been the most glamorous floor covering, but it’s worked 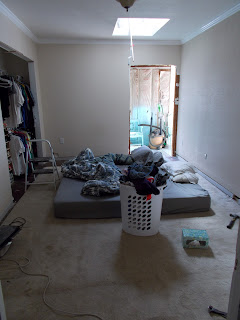 And now that the floors will be refinished when we get back from our trip we want to be able to look at them, at least a little bit. The finished edge carpet rug in the bedroom now fills up almost the entire room. I measured and figured that an 8’x10′-ish rug would work. If I could find on that was a foot or two more narrow that would be magical, but we all know that’s not really standard. Sigh.I know we want to paint this room a light blue-ish tone so when I got an email from RugsUSA that they were having a Columbus Day sale of 60% off I said yes please! I sent Chris an email while he was at work, making sure to point out the really good sale 🙂 And per the way we usually purchase decor items, I sent him links of rugs I liked and told him which were my favorites. Usually he whittles it down to 2, tells me what his favorite is, then I make the final pick.These were the 3 rugs I settled on 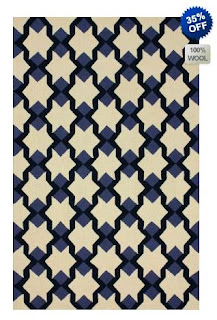 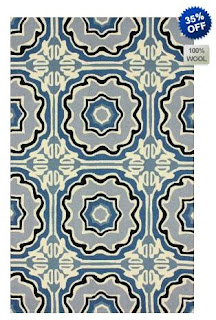 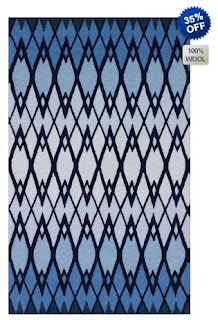 (found here)I had liked the 2nd and 3rd the best and I was hoping Chris did too. I was surprised and excited when I got this response from my email, “just buy whatever one you like and don’t say i never give in! 🙂” Gotta love that man 🙂With my pick of what to get I was really torn between the 2nd and 3rd. I really liked the 3rd, but I liked all the color variation and gradient the best, and frankly, you’re just not going to be able to see that under the bed so the smarter decision was the 2nd. Yay!

So I snatched it up yesterday for $205 after the 60% off discount! A 7’6″ x 9’6″ wool rug for just over $200? Score! And now we’ll have a pretty rug for our pretty bedroom. Well, one day pretty bedroom. The mattress on the floor and ripped off baseboards don’t offer a lot, but who knows, maybe we’ll start a new style: lazy chic.