The last week has been madness. I worked at the A’s Friday, Saturday, Monday, Tuesday, Wednesday and went to the game Sunday (and Chris’ cousin’s choir sang the National Anthem). If you haven’t already figured it out I LOVE baseball and I LOOOOOOVE the A’s. And this season has been nothing short of magical. I won’t bore you with a bunch of stats that I find absolutely amazing, but between walk off wins, their amazing camaraderie, a surprisingly amazing winning season, working there this year has been awesome. Working the game on Monday night was a highlight because I got to see them clinch a spot in the playoffs 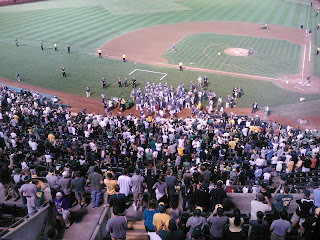 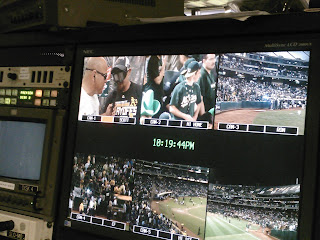 The A’s were 13 games back on June 30th, and 5 games back with 9 to play in the season. They finished 6-0 and SWEPT the first place Rangers in Oakland on Monday, Tuesday and Wednesday. Being a part of that magic was just amazing. When I played the “roll out” (the “best” highlight of the game played when the game is over) on Wednesday I struggled really hard not to start bawling as I counted out my audio and video time codes. It was awesome. My goal at the beginning of the season was for them to be .500, but a winning season, a playoff berth and an AL West Championship is just amazing. And to top it off, Wednesday was my 27th birthday, so it was pretty much the best birthday present ever (then Chris took me out for an AWESOME day yesterday for a belated celebration). 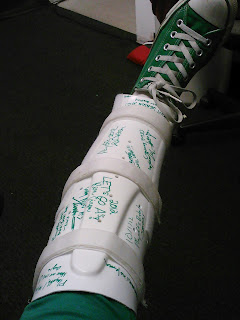 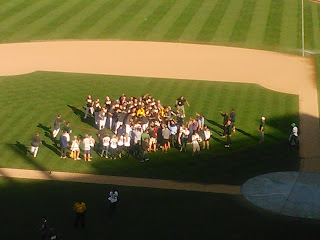 (they came out nearly an hour later and celebrated on the mound, much to the delight of all the fans still in the stadium) 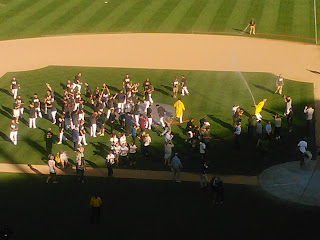 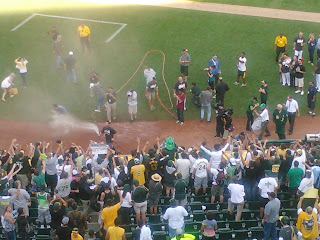 And we were sooooo happy . Here we are in the parking lot still celebrating 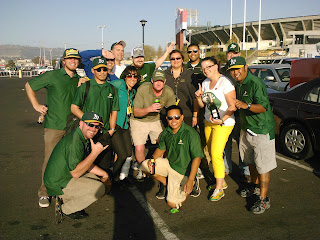 But now back to house stuff 🙂

The last week was crazy, and now it’s about to get even crazier: we have SIX DAYS till we leave on our trip!!! That means we have 6 days to complete 17 items on our flooring to do list (we only got one done this week…), buy the stain for the flooring refinishers, and put the house in somewhat packed-up-disarray-order for family who will be staying here while we’re gone. It will be a crazy 6 days, but nothing really lights a fire under your ass like a list that HAS TO GET DONE. Cheers to the A’s and 6 days of insanity!

« The Evolution of a House
Countdown: 4 Days »