Now that it has finally been consistently warm here in Oakland for a couple weeks (although Friday it RAINED), our compost has finally started breaking down. A little over 6 months ago I built us a handy dandy compost shelving unit 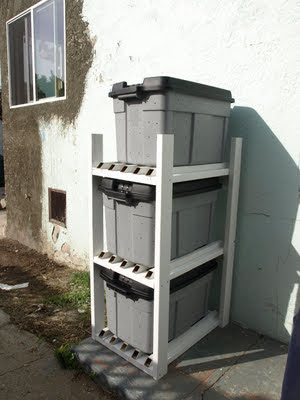 Although we could put things like paper, paper towels, and other similar products in our compost, we only put in food waste because we’re planning on using the soil it creates in our second vegge garden (the one that will line the back of the house, more on that at the end of the post), so we want to limit the amount of chemicals in our compost because we’ll be growing veggies we eat with it.

A little while ago I took down the top two bins to see how things were going and mix it around a bit.

First, I took down the middle bin – food that’s in the process of breaking down (not totally graphic, but it is rotten food, so I give you warning) 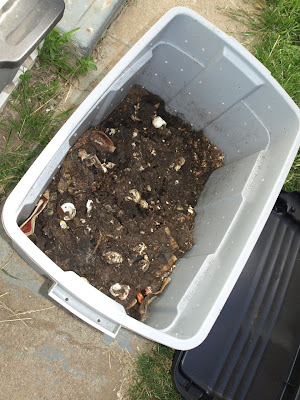 I was actually surprised by how much things had broken down already considering it hasn’t been that warm and there aren’t too many earth worms making a home inside (we normally just toss in ones we find around the yard).

After I mixed things around I put the bin on the bottom (though it’s not totally broken down, the two bins that have food waste inside are getting pretty full, so I wanted to start a new one).

Then, I got out the top one, our most recent food waste 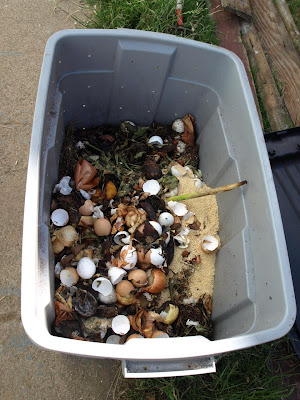 This one isn’t nearly as far along (as you can tell), but after mixing things around it looks a lot better 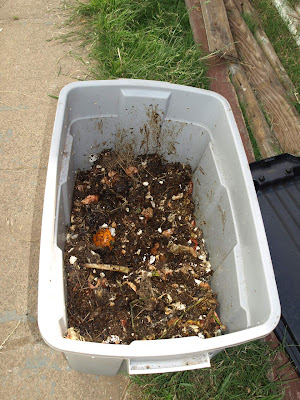 After I was done, I tossed this one back on the middle shelf and started a brand new bin for food waste. 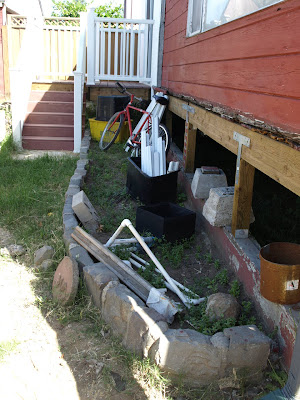 (we’ll wait until we repair the back of the house – that GROSS addition – then get it stucco’d, clean things up a bit, and then plant some tasty veggies). It’s so cool to see the process of how food breaks down and turns into soil.

Food we’ve noticed that hasn’t broken down as fast: orange skin, avocado skin, onions and egg shells (that one I was actually very surprised about).

I can’t WAIT to plant our vegge garden with the help of this soil!!!