With the bathroom just about done, it’s time to get our heads wrapped around the next projects we’ve got in the pipeline. And to make things start off on a positive note, we’re going to finish two rooms, hooray! What two rooms?

First up is my art room. Because finishing this room will probably only take about 5 hours. We’ve got to finish this wall 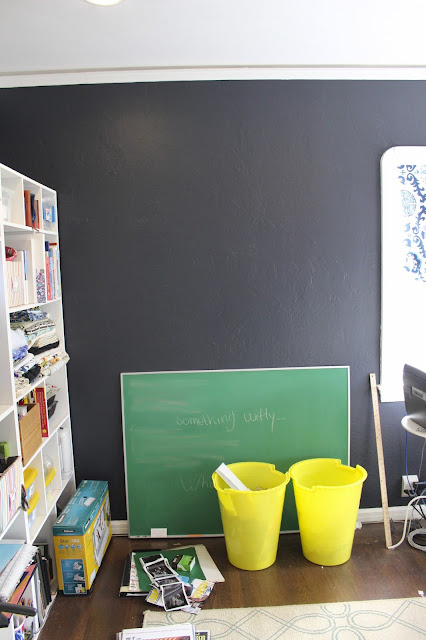 That entails building the legs for my work table and then hanging that chalkboard right above it. The other task is finishing off the top of my shelving unit 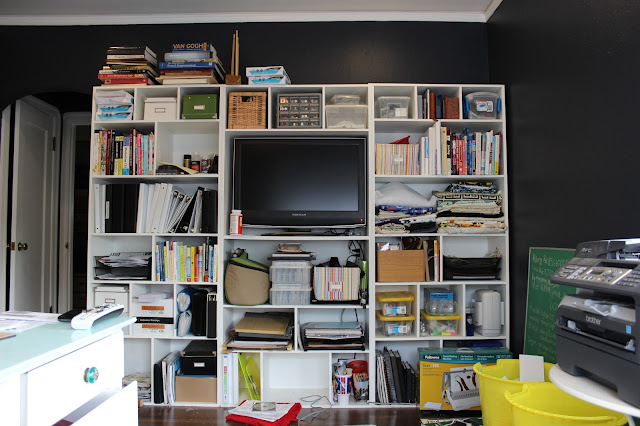 After that I need to clean up a bit. Cashew’s shelving unit in the middle of the room doesn’t make for a good Before & After pic 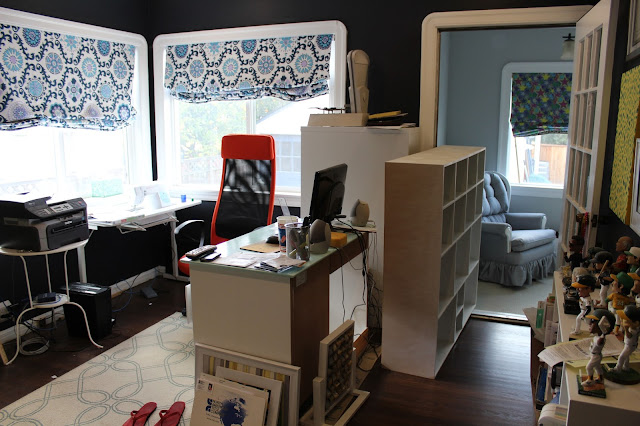 Once we cut that shelving unit down (making it about 4″ skinnier so it fits on the wall with the crib) all the furniture placement for her room will be done, so that’s pretty good news too. Then just comes filling it with baby stuff and hanging the artwork.

The next room that also only has 2 tasks to complete to call it done: the TV room 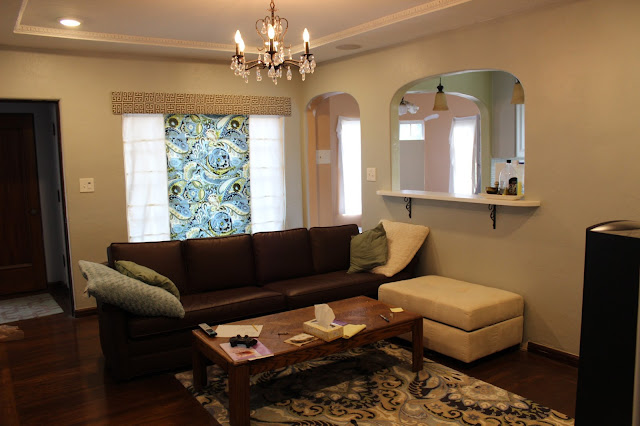 You can see in the above pic a little spot to the right of the ottoman that’s got no baseboard. We’ve not no baseboard there for about 5 feet, but it’s nearly all behind the ottoman and couch so we’ve ignored it. It’ll be nice to cut the baseboard down, stain it and install it. No one will really notice, but it’s just one of those things that nags at you. 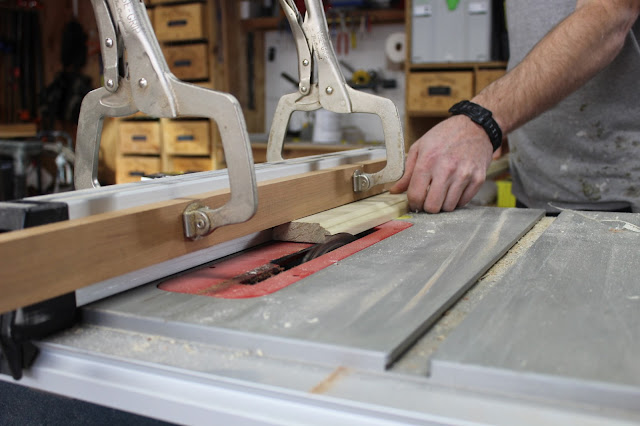 We started last weekend on a break from bathroom work. It was one of those days where all the measuring goes wrong, tools aren’t working right (it makes me feel better than saying, “We weren’t using the tools right,” though I’m sure our router table was being an especially big bastard that day). Building ten won’t go quickly, but we’re hoping they’ll be finished in the near future. After all, these walls are begging for artwork It’ll be exciting to check two rooms off of our to do list, put another two check marks on our 2013 house goals list, and write 2 more Before & After posts 🙂 Everyone likes a good Before & After 🙂

Then we move on to a project neither of us are really looking forward to: the laundry room 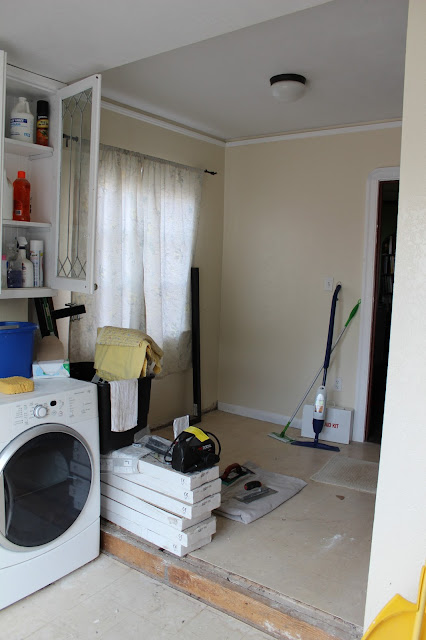 For now we’re just planning to level out the floor, level out the ceiling and install the “new” laminate that’s sitting in those 6 boxes. I say “new” because we’ve had this flooring for approximately 3 1/2 years and it’s been sitting there waiting patiently to be installed. 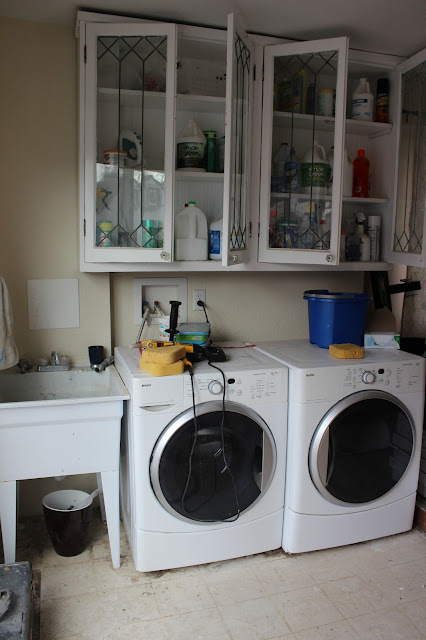 We’ll probably call the work done around that time. Though we might put up some hooks on the ceiling to hang our bikes so they’re out of our way and stored nicely 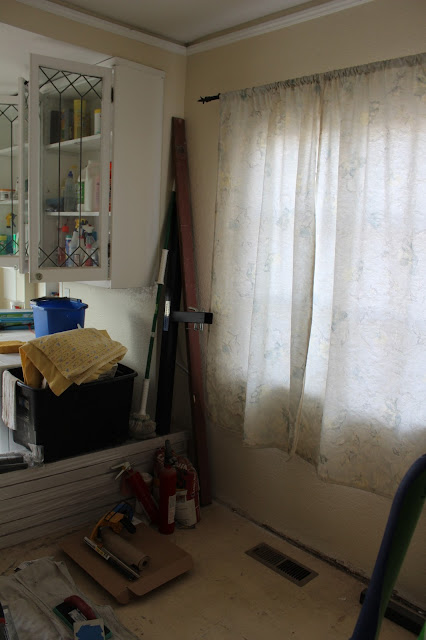 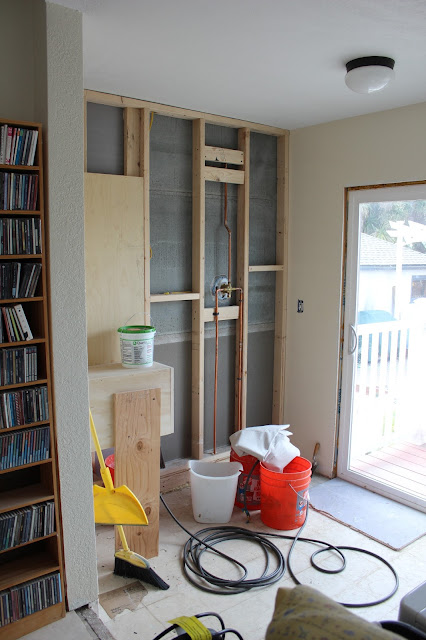 It would be exciting to get all of those projects done in the next 6 weeks. That would give us about a month to tackle the drainage issues in the backyard and under the house before Miss Cashew is set to make her arrival. Here’s to hoping! 🙂