I love the chair in Zoe’s room, but I was feeling like it needed a face lift for her new room 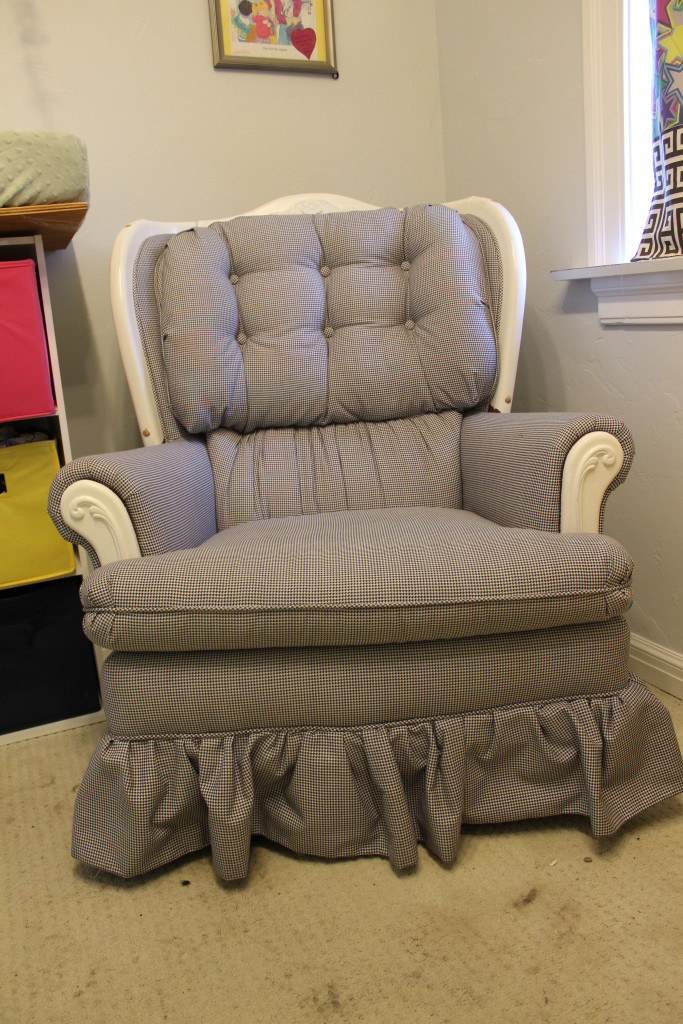 I never had the balls to upholster it in some crazy fabric (mostly because it costs to much and I was afraid I would get sick of it in a year or two). I was (obviously) on Pinterest and found this great image Perfection! I LOVED the buttons. 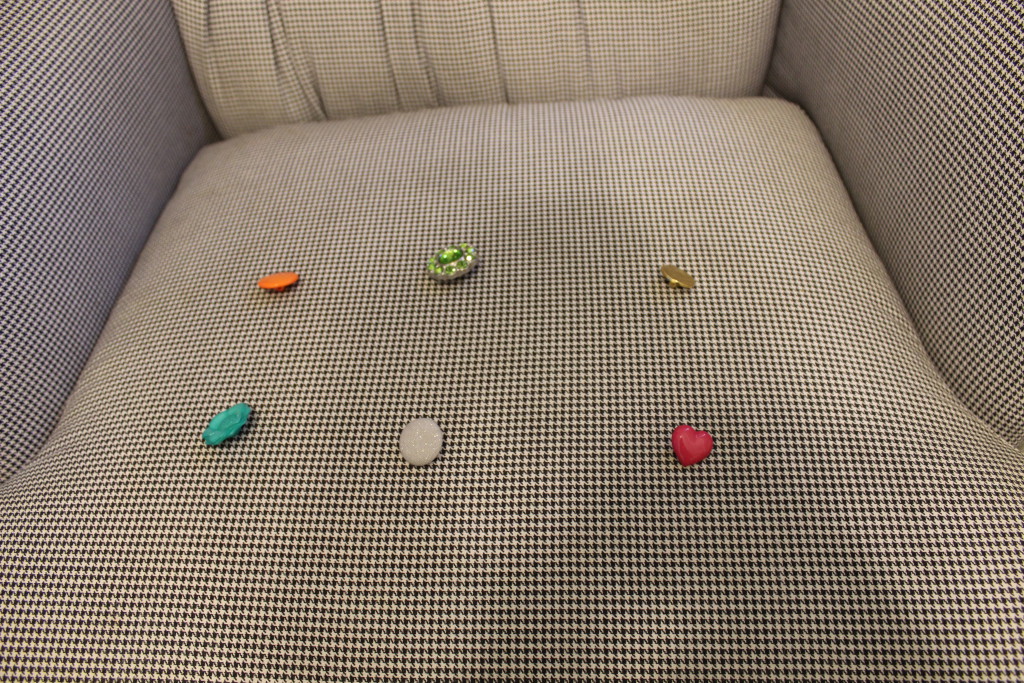 I wanted them colorful and different. I liked the various shapes and styles. I thought it made it a lot of fun.

I have to admit I was a little scared to take this project on because I didn’t know how to replaced tufted buttons. I Googled a little bit but couldn’t find anything extremely helpful. I went over to the chair and examined the buttons and gathered my tools:

And that was all it took. 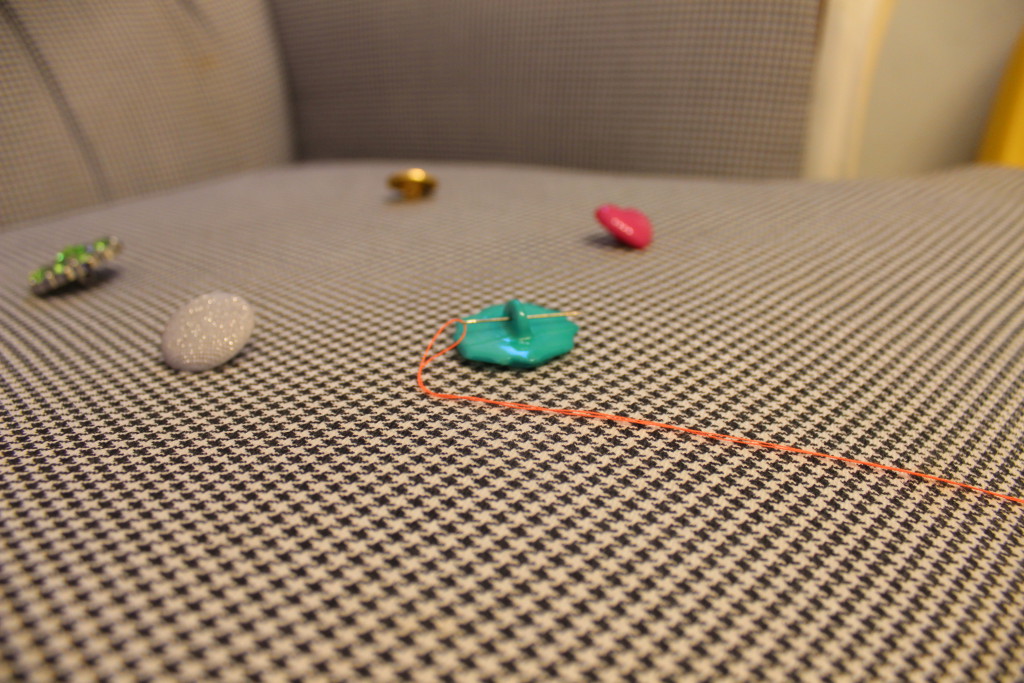 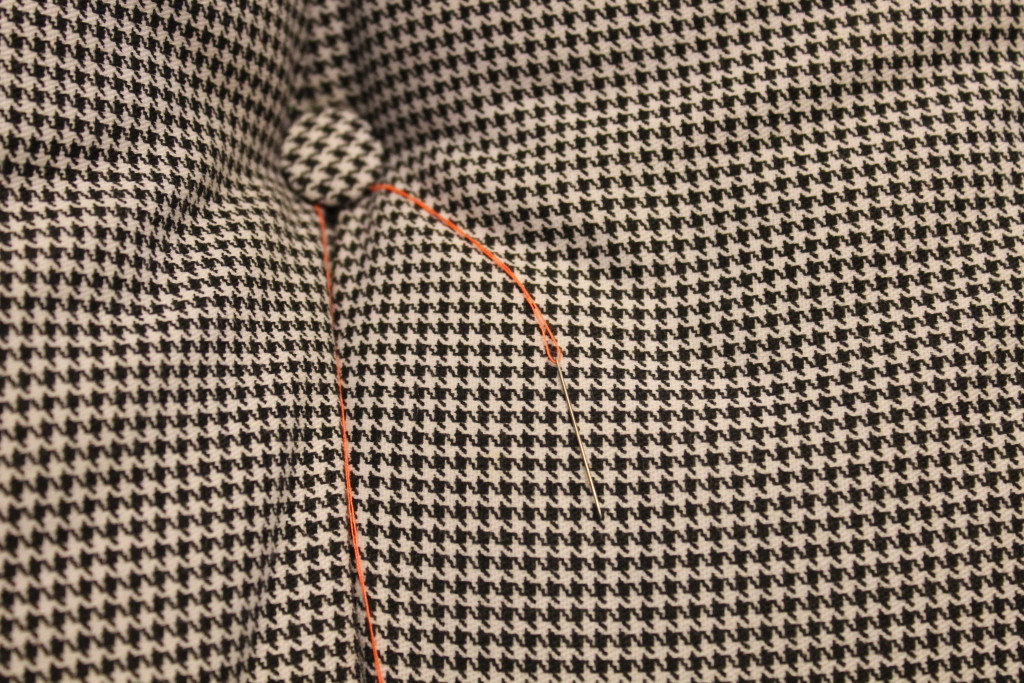 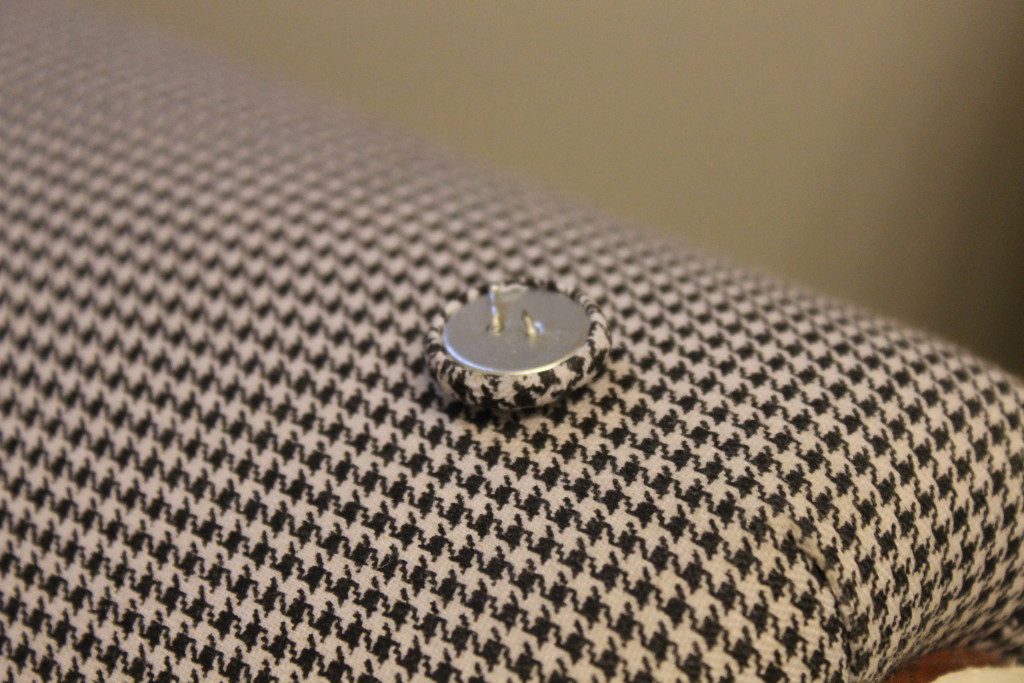 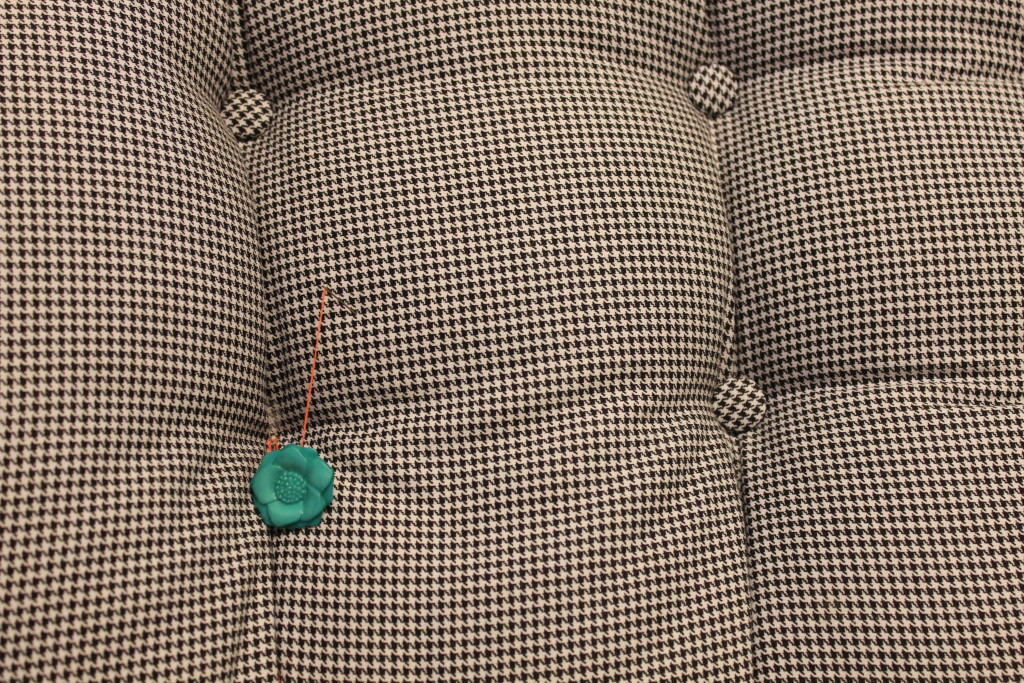 Once the new button was threaded, I cut the string so the needle wasn’t attached anymore. And then I just simply tied the string in a couple knots, and boom, the button was attached! 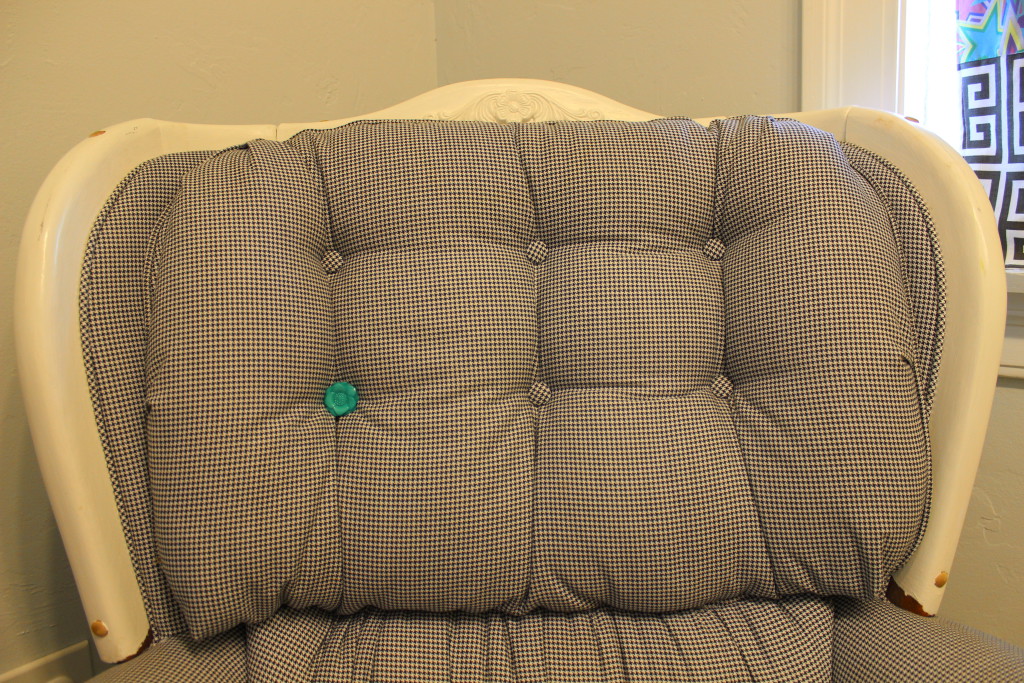 Now, the reason I said in the beginning that I would have rather used a thicker needle is because the standard sewing needle is thinner, it was actually a little hard to poke through the metal ring in the chair and then direct it to a point that it wasn’t poking into the chair. A thicker needle doesn’t bend as easily, and therefor is easier to work with.

The other revision was thicker embroidery thread – which is easier to thread through a thicker needle also. The reason I would revise this is because Merritt became completely FASCINATED with the new buttons and ripped one off. Obviously standard sewing thread is thin, so Merritt was able to rip the button off easily. After I replaced the button with thicker embroidery thread even after I fucked with the button I couldn’t rip it off. WIN!

I repeated all the steps for all 6 buttons. And it looks marvelous 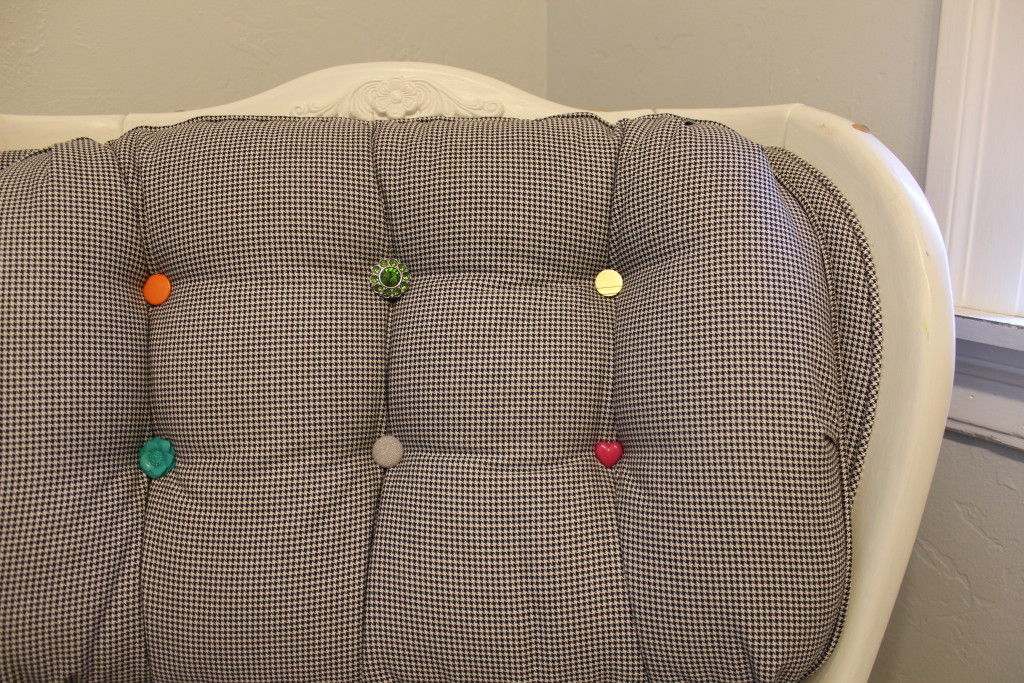 One of the best things is that Zoe “helped” with this project. She had fun following simple directions and “helping” me tie the knots (she actually did help with this in fact). But the icing on the cake was that the next morning when she woke up, she was running out of her room, and right before she was out, she stopped, turned around and said to me, “Mommy, I really love my new buttons.” Heart melting 🙂 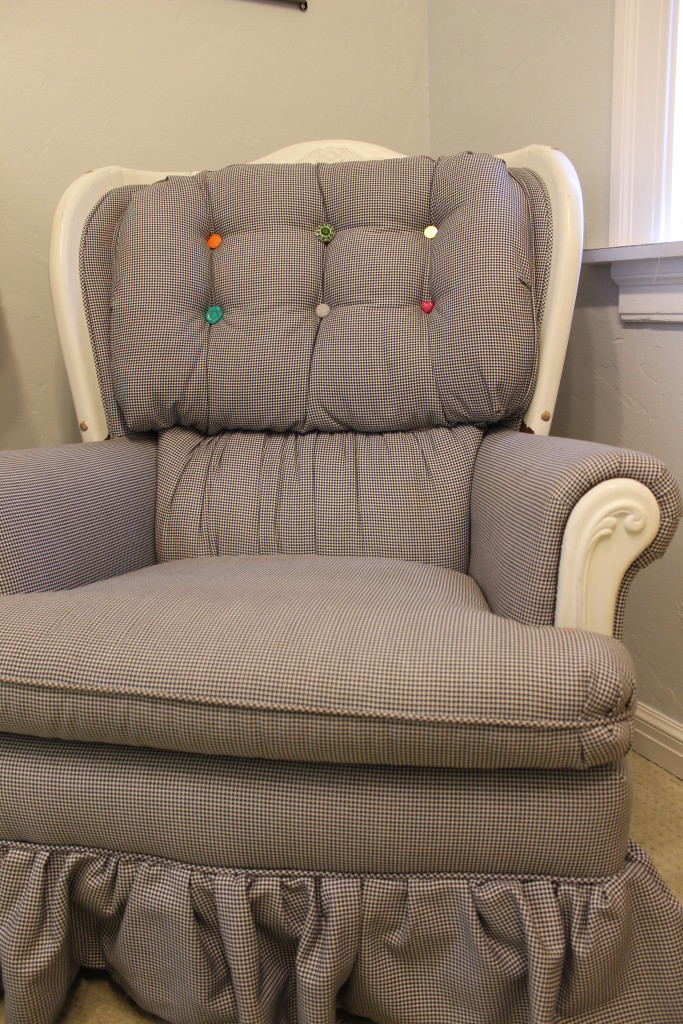 I still need to touch up the white paint – something I haven’t done in the 2 1/2 years that we’ve had this chair. But I was actually thinking about painting over the white with a fun, bright color. I’m also thinking about removing the skirt on the bottom. Just to update it a bit more. I was at the park with a friend and our kids the other day and she gave me some great ideas about how to jazz it up a bit with a little trim. But hey, those buttons are replaced and they’re looking good. And it makes me happy. And Zoe loves them 🙂

« Merritt: 8 months
Of Course there are “Extenuating Circumstances” »