If you follow us on Facebook you’d know that last week Zoe and I went to the city of Oakland to learn about our house. It’s been on our to do list for several years and now that baseball season is over and Zoe is still immobile I figured I should take advantage of these last couple months of being able to cart Zoe wherever I please without her being able to protest much. Off to the city of Oakland it was! 🙂

We spent about 2 hours there in both the Building Permits section and the Department of Planning, Building and Neighborhood Preservation. I even got to spend a little over an hour with the Historic Preservation Planner. So cool!

Chris and I were pretty sure the city would have cool information about our street (and hopefully our house) because it’s a very well known street in Oakland. We get many visitors on Halloween, a TON during Christmas and all the houses were designed by WW Dixon and built by RC Hillen as Storybook homes (so all the houses on the street look like little fairy tale castles, all with their own cool features). In fact, as I went through talking to various people at the city of Oakland, many were excited about the street we lived on and chatted with us about it, “Oh I’ve visited that street on Christmas every year since I was a kid!” It made me feel very lucky once again to live on such a great street.

But anyway, on to what we learned!

When I was first downstairs in the permit department they easily found some files on microfiche from the 50s and 60s. Most were pretty boring (pest inspections) but I did find a hilarious note addressed to the building inspector in 1959 (you can click all photos to make them bigger) 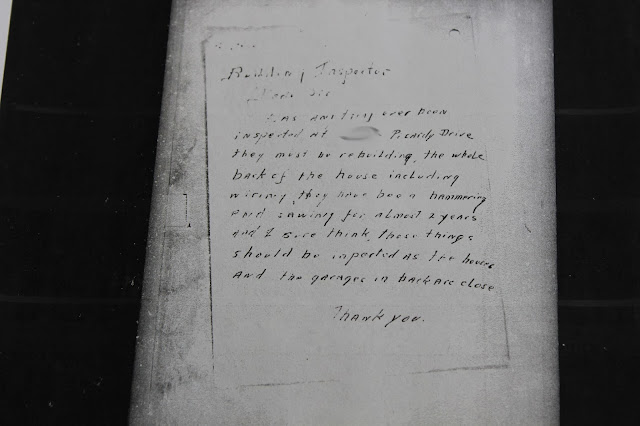 I found this note hilarious for 2 reasons. 1) that you could actually write a note addressed to the building inspector expecting a response and 2) that someone was complaining about all the noise coming from our house and that someone must be renovating. Bahahahaha 🙂 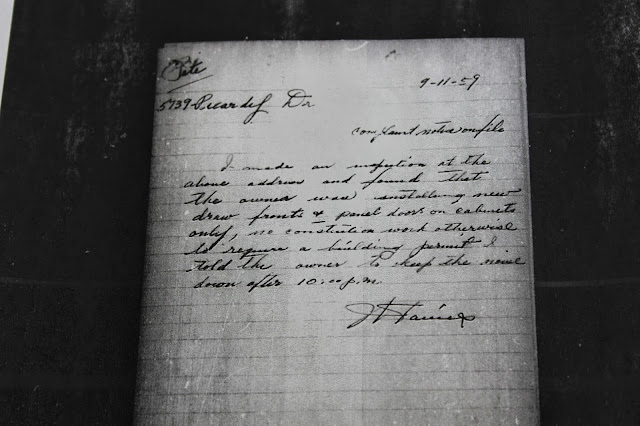 Hilarious. They came to see what was happening and found that they were just putting drawer fronts on cabinets and installing panel doors. Then he asked that the homeowners keep the noise down after 10pm. Bah! Awesome.

After a little bit the man behind the desk couldn’t find much more, but he knew because our street was well known that there must be more info so he referred me to a young man in the Historic Department who then took me upstairs to talk with the Historic Preservation Planner. And that was fucking AWESOME.

I spent an hour+ up there talking with Betty Marvin and she was an amazing wealth of knowledge. By the time I got upstairs she had pulled out the file on our street, several maps, newspaper clippings and so many other awesome things for me to look at. I had so much fun talking to her and she was just so cool. It was amazing getting to look through all the goodies she had set out for me to look through. She even let me start a copy pile so that I could take home stuff with me (I tried not to be too greedy).

In the end, these were my favorites that we copied:

An article written by RC Hillen in 1919 about Oakland and why it’s great to live here (duh!) 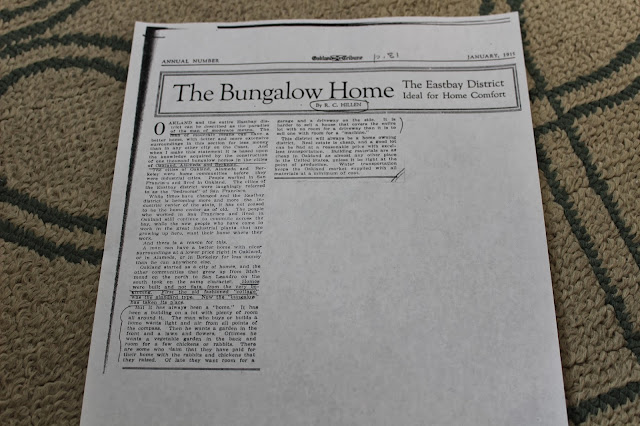 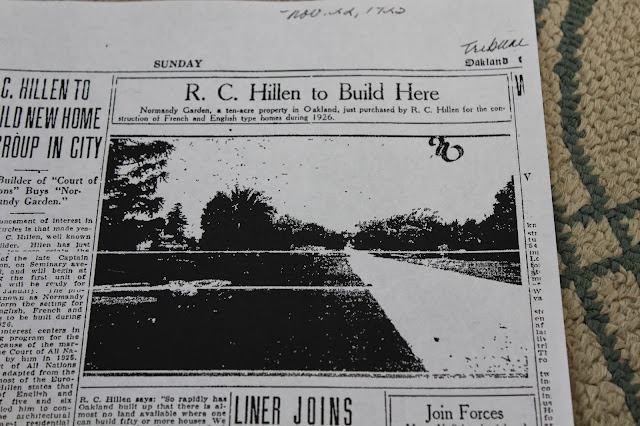 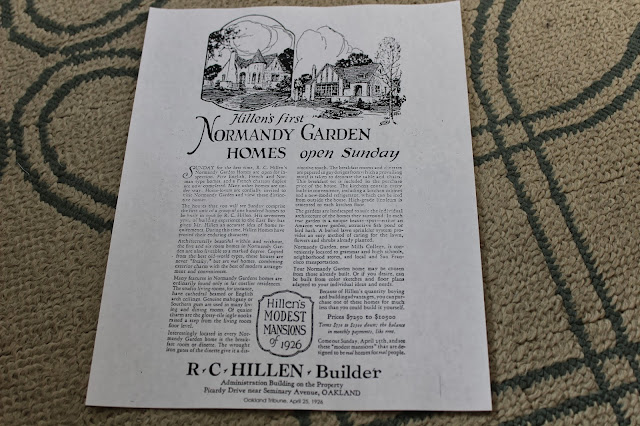 That clipping especially was really interesting to read because it explained the houses in such detail and it was just so interesting to read about how they advertised them, the original features in each house, the place settings you got with the purchase of a home (so cool!), and so many other awesome things. 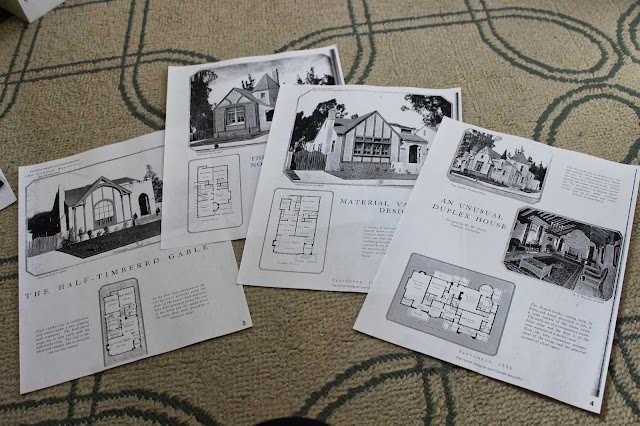 Unfortunately they didn’t have a clipping of our home (booo), but it was really cool to see all the other ones.

There was also a 20 page report done by the city of Oakland in the 1980s. It was done in conjunction with the State of California Resources Agency Department of Parks and Recreation and was a Historic Resources Inventory. Most of the other areas of Oakland that were studied during this time were downtown or in West Oakland (the oldest residentially developed area), so it was really cool to see that our neighborhood was specifically selected when so few other residential areas were.

And lastly, Betty found the original map of our street and neighborhood with the permit listings for every house on our street. She gave me instructions where to look downstairs in the permit department for our original building permit and we found it! 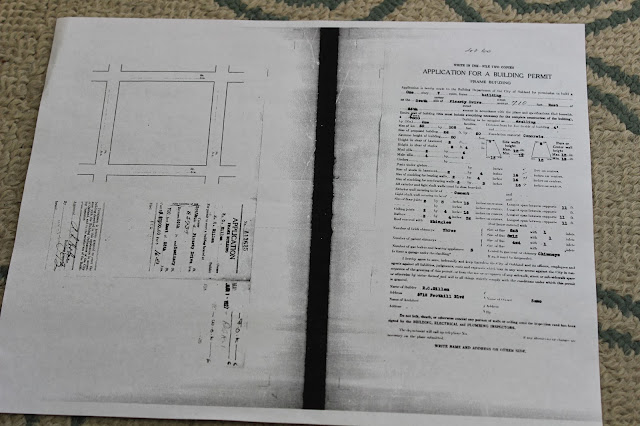 This is the best part 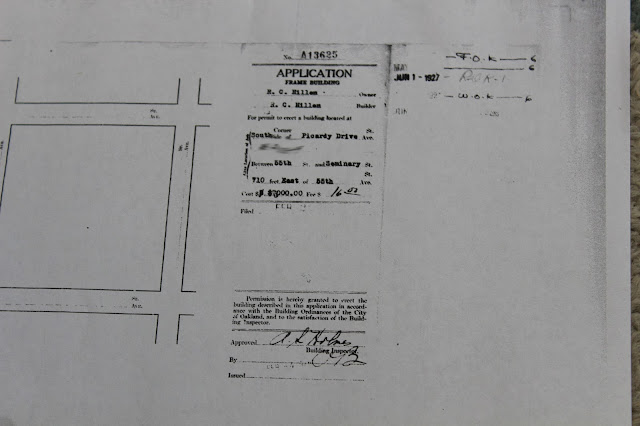 I was so happy to come home and share all the clippings with Chris. We went through all of them together and read all the articles and talked about how awesome Betty was to go through everything with me and spend so much time talking with me. She is a gem and is just invaluable. I’m sure there are few people in the city who know as much as her and it was just so awesome that she spent so much time with me (and Zoe of course). And she seemed to happy to do it.

I also felt so thankful to live on such a great street. We already thought our street, and house, were awesome, and this just completely cemented its awesome-ness. We love all of our neighbors, our community and getting to be part of such a great street that does so much for each other. We have street wide yard sales, an explosion of lights on the holidays, summer social parties, neighborhood watch meetings and so much more. It’s wonderful to live on a street with so many great neighbors and such a love for where you live.

« Zoe Can Finally Wear Those Onesies
To Get the Bedroom Done »