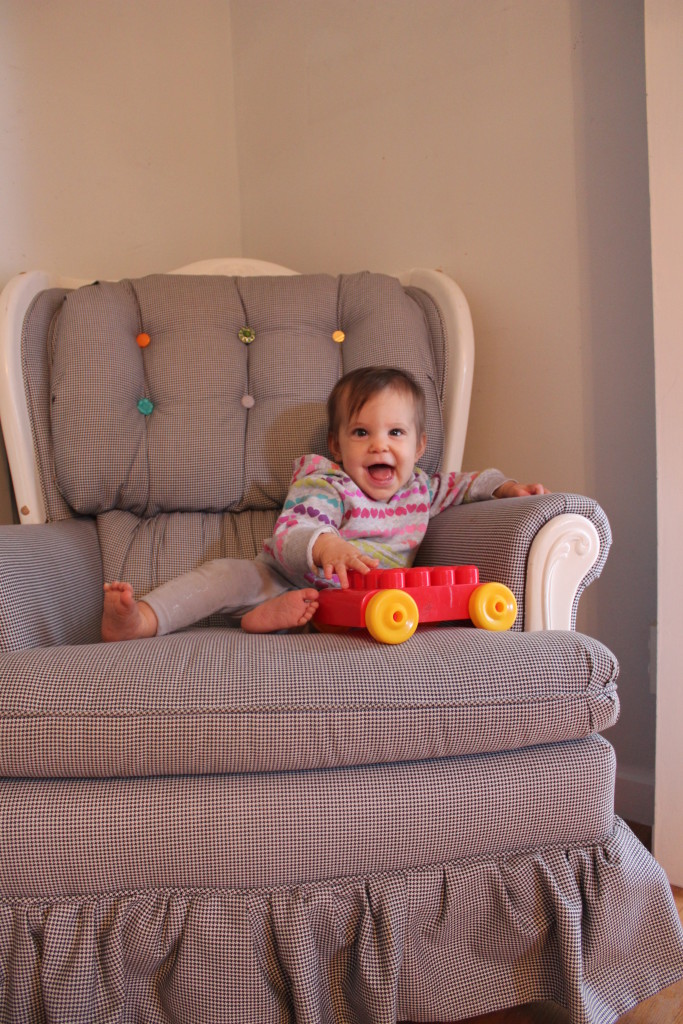 Cuties. Both so smiley and goofy. And inadvertently the same sort of range of colors. Lol. I do that all the time on accident.

Merritt is still just one of the happiest babies. Honestly, she is always in such good spirits and is just totally content to hang out and be around everyone. It is such a joy to see a kid that is so easily pleased with herself. And everyone around her. She is just happy as a clam to be around everyone and part of the party.

One of the things that makes her happiest is Zoe. LOVES her so much. And Zoe still loves her too (frequently at bedtime she asks if baby can sleep with her). But the adoration in Merritt’s eyes when Zoe is playing with her is just about one of the best things to see. They’ve started to play together and you can actually leave them alone to entertain each other for 5-20 minutes at a time. It’s pretty awesome. Having babies close together is paying off from time to time lately 🙂

One of Merritt’s FAVORITE things is when she’s sitting in her highchair and Zoe runs back and forth behind her. Merritt just follows along turning from side to side wiggling those feet a mile a minute and cracking up. It happens maybe every other day at breakfast or dinner and I always look forward to the interaction. Zoe laughs so much and Merritt laughs so much. It just gets them both so excited 🙂 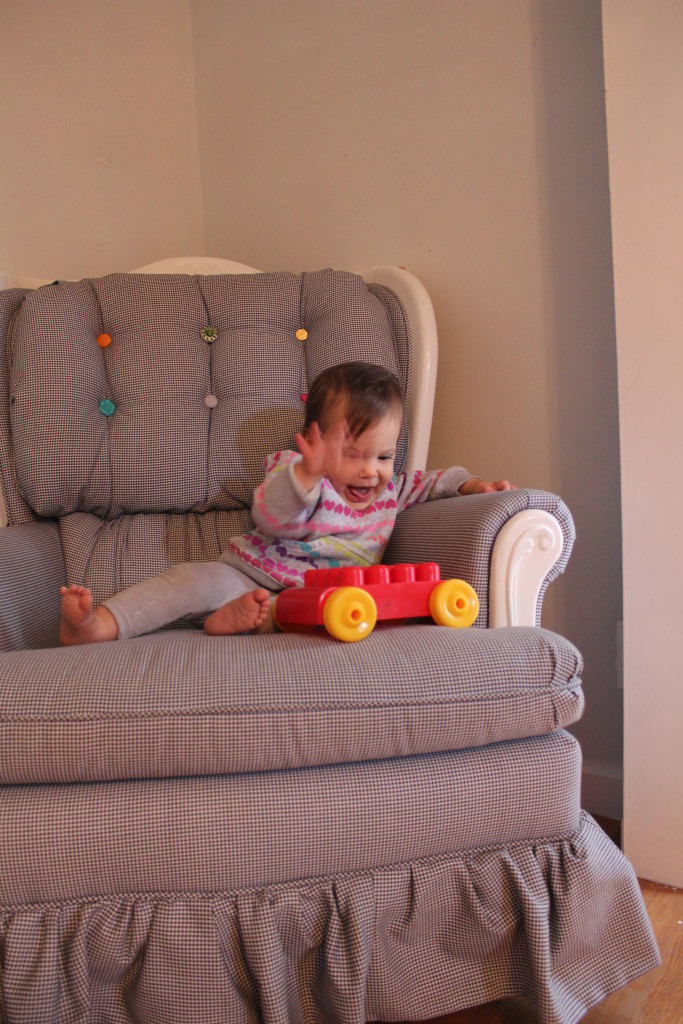 Speaking of the highchair: holy crap Merritt L.O.V.E.S. food. I thought Zoe was in love with food, but Merritt takes it to an entire new level. I’m still nursing her about 5 times a day (and once a night), but every morning when she wakes up and she crawls over to the coffee table banging it or looking at me grunting ready to eat. And it doesn’t stop throughout the day. Always the grunting, always the demanding of eating. I joke with Chris that with the amount that she yells at us for food when we’re out I fear people don’t think we feed her. But I will have just nursed her, she will have eaten 2 pouches of food, a small tupperware of blueberries and then she spots you eating some crackers and she just starts yelling and grunting at you demanding to eat some as well. One time I had nursed her, she’d eaten some blueberries, corn and a pouch and then I sat down at the coffee table to eat a sandwich. She literally came crawling over from across the room, stood up at the table, and started grunting at me and pounding the table. It was hilarious. And she will take BITES out of it.

The girl finally got her first two teeth, yay! I was wondering when she’d pop some out. They’re still really bitty and only just broken through her gums. But they have made an appearance! 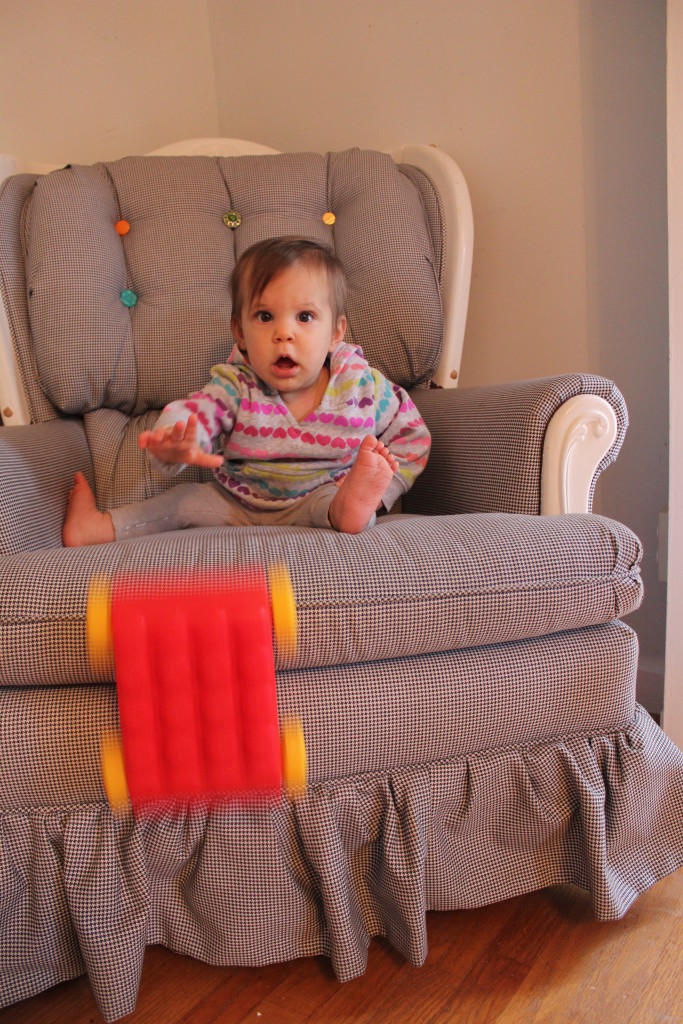 One thing I’ve noticed about her is that she loves toys with wheels. I first noticed that she liked this little pink car a lot at my dad and Wendy’s house. She would usually find her way to it each week when we’d be dropping Zoe off. But then I started noticing that she would usually gravitate towards the toys with wheels that we have at our house as well. We’ve got several train cars and old matchbox cars of Chris’ and she would find one and just start fiddling with its wheels and running it along the ground. Her favorite is definitely this red car to build with blocks that’s in these pictures. I wonder if she’ll continue with a love of cars and trains. I hope so 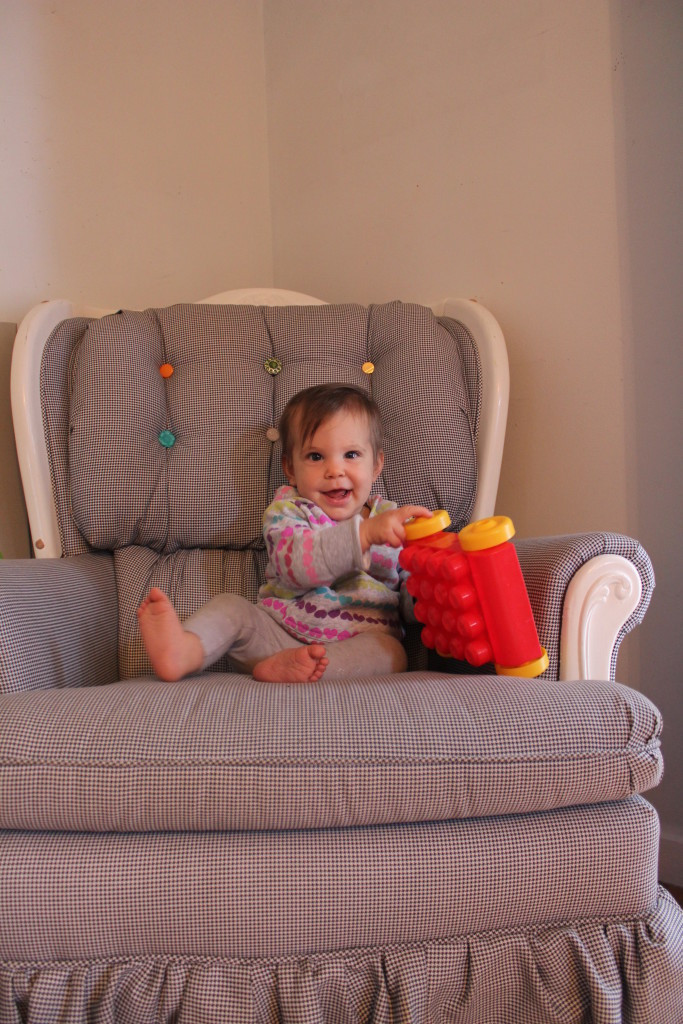 No walking yet. Zoe walked at 14 months. She was also standing at 7-8 months. So obviously the two had no correlation for Zoe 🙂 Merritt has been obsessed with standing this month. She’s finally figured out how to sit back down (sometimes), which is good because she would get frustrated with not being able to get down from a standing position. But she likes to stand everywhere. Especially at the coffee table. She was trying to take a step or two for a while when you would hold her hands. But she seems very content now with just standing.

The thing I’ve really noticed about Merritt is that she works really hard to master one task at a time. She doesn’t really seem to like to multi-task. She works on one skill, gets it down, practices it for a while till she masters it, stays content with it for a while, then realizes there’s a new discovery that needs to be made. She’s very focused on learning one thing at a time. I remember Zoe sort of being all over the place is trying to figure things out. Merritt is very methodical and thought out. It reminds me a lot of Chris.

She’s started also understanding how things work a bit more. For instance, she likes to try to put her pouch tops back on. When she gets it she becomes QUITE pleased with herself. It’s adorable. Zoe has a toy kitchen with pretend fruit and veggies that are velcroed together that she can “cut” in two. Merritt will take two of them and sit on the ground for 5 minutes trying to put them back together. It’s adorable to see. She sits there on the ground with this sweet little face she always gets when she concentrates and just tries so hard to stick them back together. I love her determination. 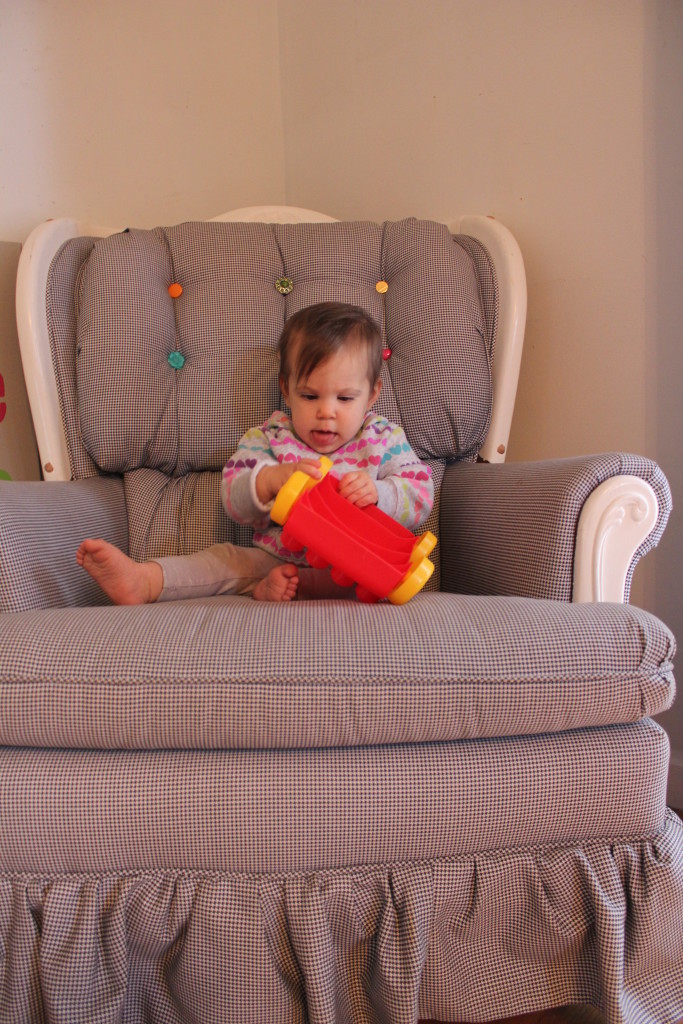 She’s learning lots of fun new skills. In addition to the high-5 she had down we now having waving, blowing kisses and clapping. And she does all of them with a giant smile. Duh 🙂

A couple weeks ago a friend of mine started watching her for a couple hours on Wednesdays and Thursdays. Merritt is definitely super attached to mommy and in the next couple of months she’ll start going to day care with Zoe. I’ve also become slammed with work now that my brother has started to get busier (he bought a new place in SF and we MIGHT do some renovation on it, it’s still up in the air). It got to the point where just working during nap time wasn’t cutting it anymore, so thank goodness for my friend. It’s helping me get a lot of work done, and it’s a nice ease into Merritt getting used to someone other than mom taking care of her. It helps that she knows my friend and sometimes her son comes to play with her as well, and she really likes him. 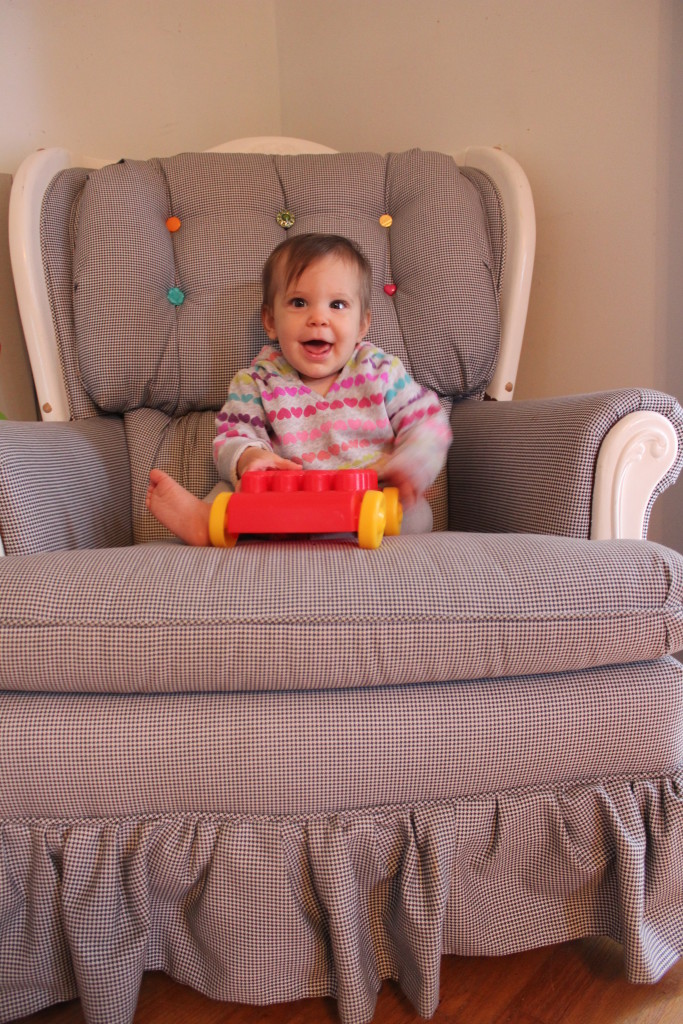 Well, that’s how life is going for this 10 month old. Just happy as a clam and loves to enjoy life with you. This little lady has such a sweet and gentle spirit.