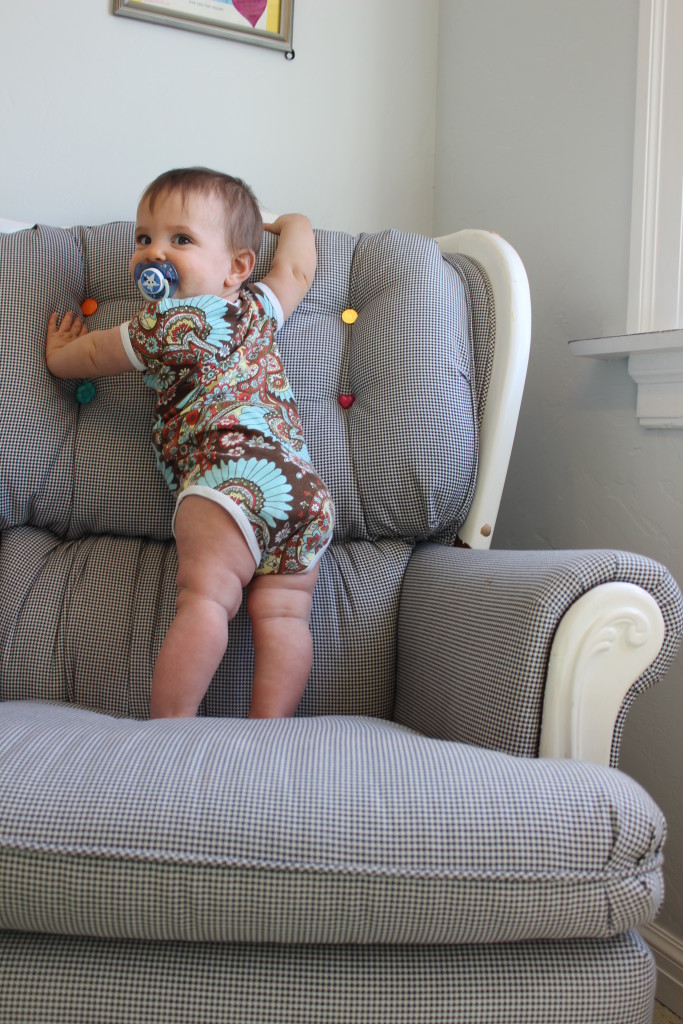 SQUISHY! 🙂 If there is one thing that is right in the world, it’s rolls on the legs of babies. Honestly, is there anything better. You just want to SQUISH them 🙂

And, of course, the comparison shot 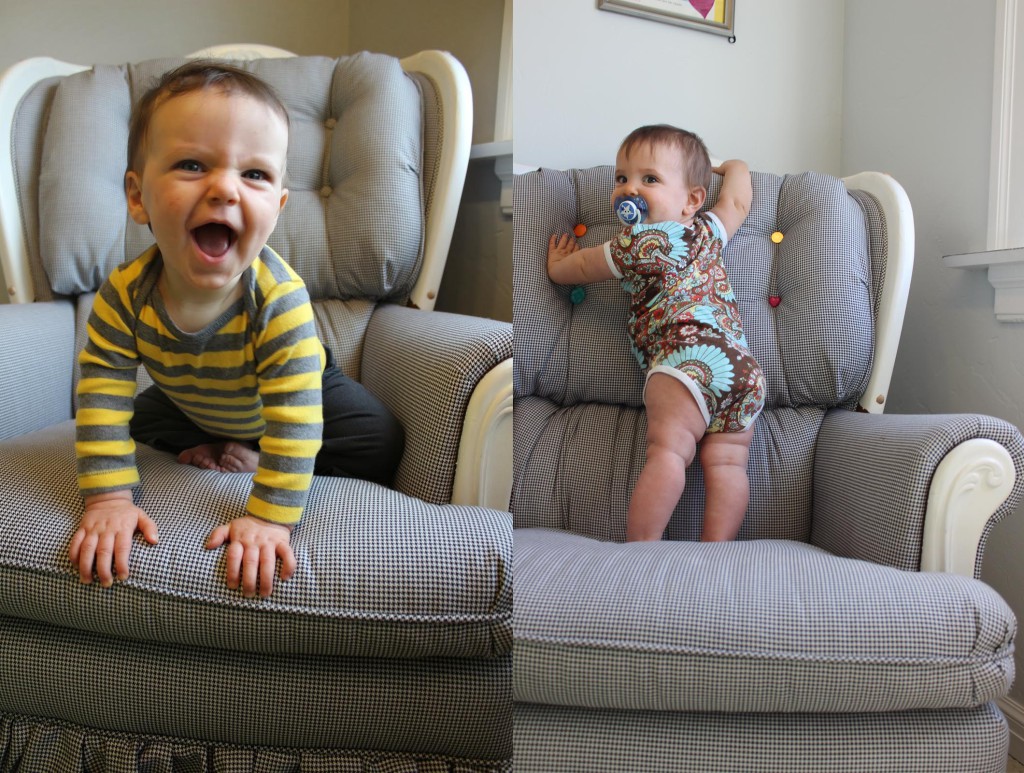 One thing of note is how playful they are in each of these photos. At this point Zoe was definitely coming into her playful personality, and Merritt has started to show that as well. She definitely isn’t as, well, for lack of a better word – crazy – as Zoe was, but she’s starting to get more playful and wiggly and for sure wants to hang out with Zoe.

Prime example of that would be the prop she has this month – Zoe’s pacifier. Yes, I KNOW, it’s bad that we haven’t taken it away from Zoe yet, but with the potential move on the horizon and Zoe’s attachment to them, it’s been hard for me to want to take it away. I have finally vowed to myself that we will start the weaning (whether the rip of a band-aid or nice and slow) after we move and before Zoe is 3. But anyway, Merritt LIGHTS UP when she sees a pacifier, “OH! Zoe loves those! I MUST HAVE ONE!” And she just dive bombs it. If Zoe has one in her mouth Merritt must crawl/climb to her and try to take it out. Luckily Zoe thinks this is all hilarious and will usually laugh and say, “No bay-bah,” and then give her one of her own to have. Merritt is then delighted and spends the next 20 minutes figuring out how to properly put it in her mouth. We took one away from her so early she now has no idea how to correctly use it so it’s usually just sitting in her mouth (sometimes in the wrong direction). She doesn’t suck on it or anything, she just holds it. Sometimes she smiles so big because she’s so delighted she has one it squirts out of her mouth. That always makes me laugh

So, obviously the love for Zoe has continued, and so has Zoe’s love for Merritt. Still wonderful to see.

One thing that’s funny is that this month Merritt has started to TRY to crawl and Zoe thinks that is FABULOUS. The beginning of the month Merritt would sort of get on all 4’s and then rock back and forth, sometimes grunting and yelling. She couldn’t figure out how to make herself go and sometimes she would get really pissed off about it. It was both hilarious and a little sad. I’ve never seen a baby so obviously express their frustration about something they can’t do that they’re trying to. This has continued most of the month, but she’s finally figured it out a little bit. She never did the army crawl (dragging themselves on the ground that I see most babies do), she has been intent on only crawling on all 4’s. She had one going where she would sit up, face plant, pull herself forward and do it all again. The problem is that she’s so focused on her feet and legs that she will sometimes shove herself in a push up position and then wonder why she’s not moving. Just like not using her arms during tummy time, this lady has convinced herself she will accomplish crawling the hard way. 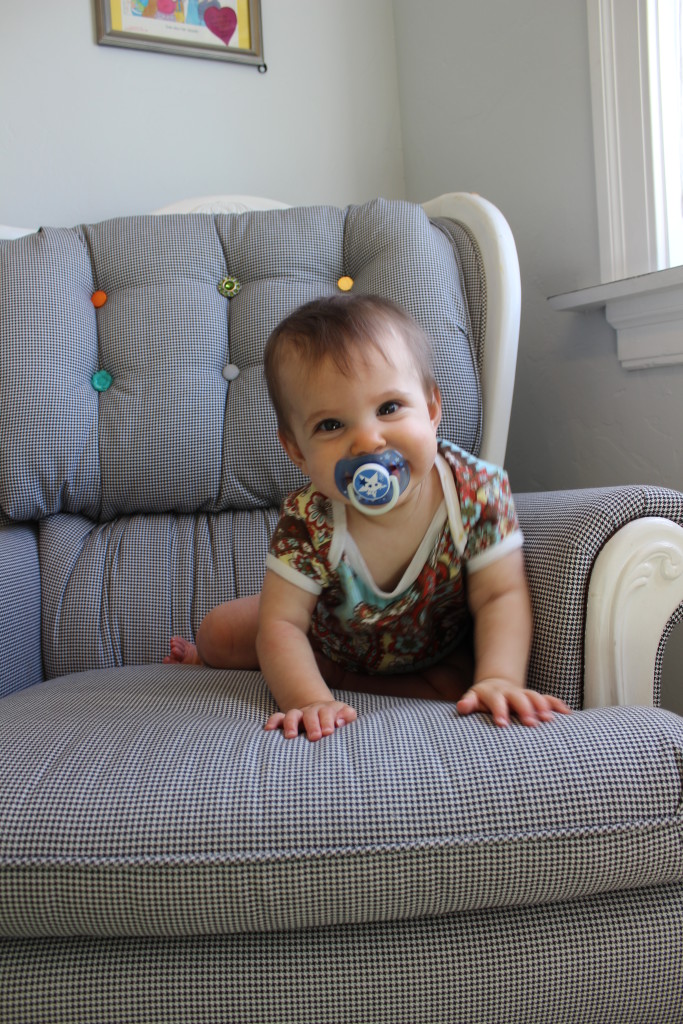 Zoe loves it and insists on crawling around on the floor with her laughing. I know once Merritt gets going Zoe will LOVE getting to play with her more. Because Merritt is getting better at crawling and moving all around from laying to sitting, etc. you can definitely tell Zoe wants to play with her more. She gets a little too rough and aggressive sometimes, but that’s totally normal, so we just try to tell her nicely when she’s going a little too far.

But for the most part, Zoe is great with her. I can actually leave them both in Zoe’s room playing (Zoe is usually “reading” to her) while I go into the kitchen for 5-10 minutes and get the backpack ready for an excursion. It’s pretty damn great to get to do that.

Like Zoe was, she’s great on errands and likes to be out and about. She LOVES sitting in the cart – an opportunity to get those feet swirling and kicking around. Still with the feet. Still so much that strangers continue to make comments to me about it 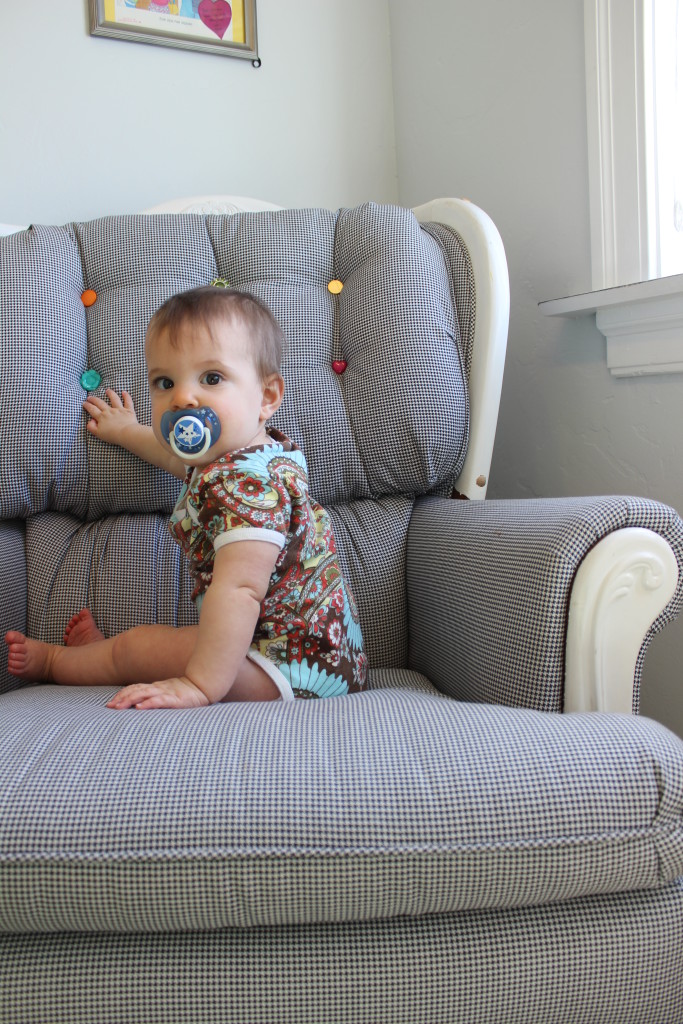 We had a little stranger danger going this month. She’s actually almost reconciled it. But in the beginning if you were to look at her too much, and heaven forbid you SMILE at her, she might dissolve into tears. I actually laughed one time about it at Home Depot because I could tell the older man who was adoring her felt awful. I felt bad for him. I told him her age and he understood immediately 🙂 She’s returned to being cautiously polite to strangers (never as outgoing as Zoe was), and she’s definitely happy to smile at you if mommy or daddy is holding her 🙂

Food is THE BEST THING IN LIFE. Honestly, I have NEVER. NEVER. NEVER seen a baby eat as much as this kid does. She must be in a growth spurt because the last week or so she has just shoved food in her mouth like there is no tomorrow. Her whole life I have never encountered a baby who was more apathetic about the boob. On occasion she has literally pulled my boob out of her mouth and pushed it away. Then she will – and I’m not joking – YELL and grunt at you until you give her food. And she can pack it away. I have a feeling she will wean herself early like Zoe did because she just does not have the attachment/desire to nurse like most kids do. She just LOVES food.

Favorites: BLUEBERRIES, still any applesauce, puffs and anything that you are trying 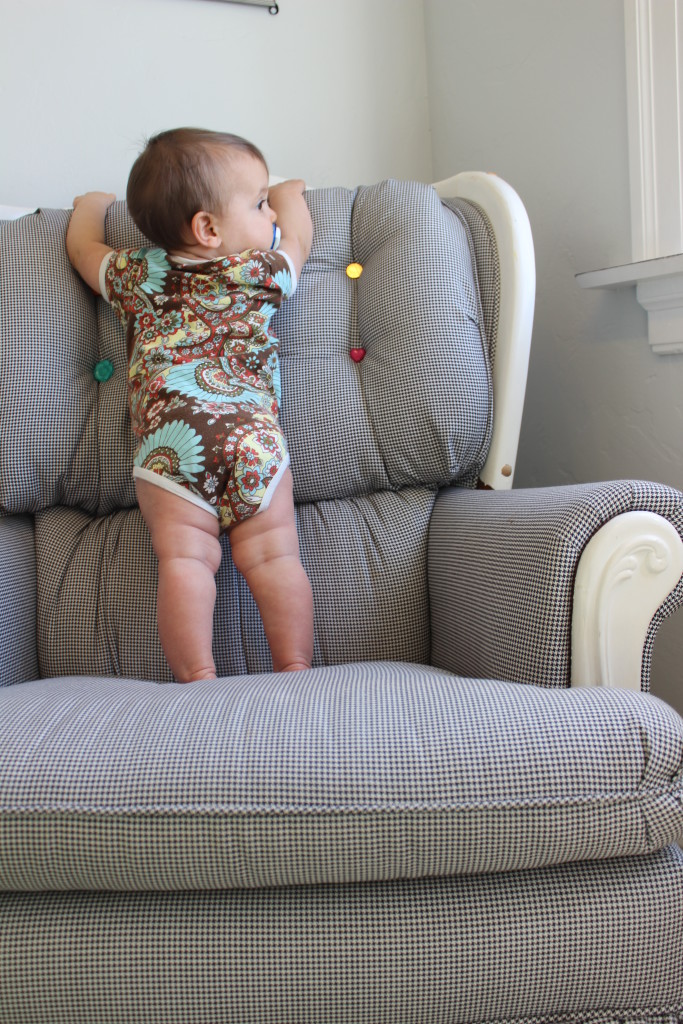 She’s great at trying new foods – like Zoe was too. It seems like in both kiddos we got the good eaters and bad sleepers. Well, not BAD, just “late” to the through the night game. We’re still not there yet. She’s waking up once or twice a night, which is still better than it was. And she puts herself right back to sleep each time. The only time in fact she WANTS to nurse is at night – and she loves it. Just my luck. Weaning her from night nursing will be a challenge. I’m thinking of starting after we move because I don’t know how much she’ll perceive that change and I’d like to have that ace in the hole if it does fuck with her a little bit. We shall see.

Oh! And last little development: she’s starting to TRY and pull herself to standing this month. Still not super great at it and can’t do it on her own. But I love seeing her try. It’s always so fun to get to see them want to do things like that. And when we cheer for her for doing it she looks at us with a GIANT smile on her face and she’s so pleased with herself. That’s one of my favorite moments – seeing her happy with herself and happy that you’re happy. This little kid is the best 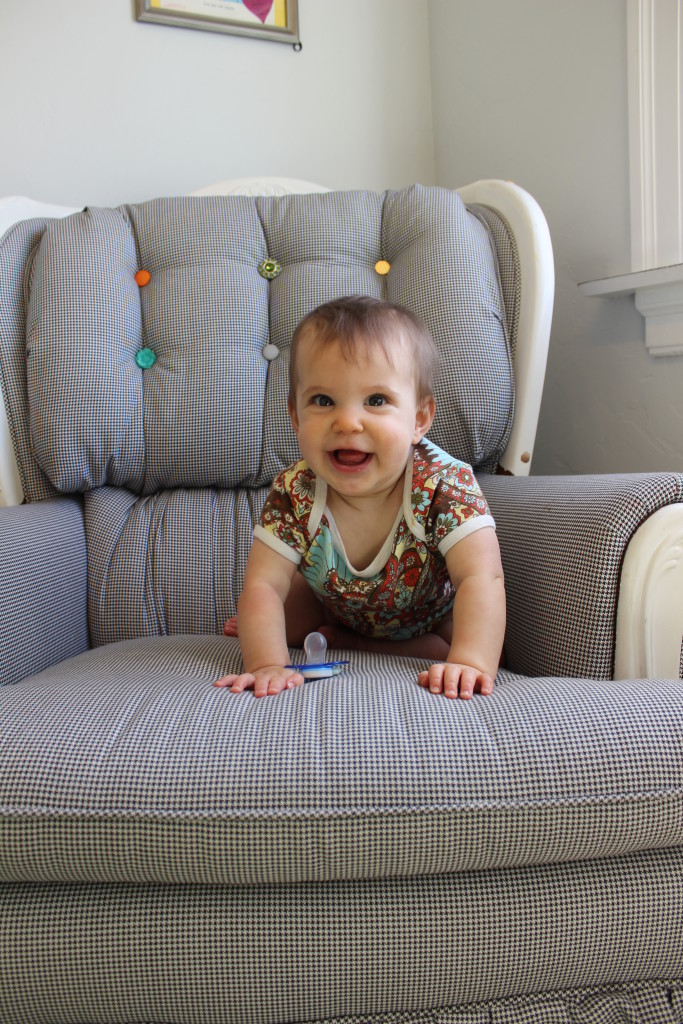 Love you my little squishy girl!

« The Laundry Room is Still Not Done
How to: Replace Buttons on a Tufted Chair »