We have now worked on this damn fence at my dad’s house on various weekends for, oh, the past 2 months. That’s right. A project we HOPED would only take a long weekend has instead taken, well, a lot more time than that.

But we are FINALLY FINALLY FINALLY done! (Thank god) We were originally going to go out and finish it on Saturday, but I have work at the A’s that afternoon, and the weather is questionable for Sunday, so with Chris having a day off today I was able to pull some switcheroos at work to head out there earlier this afternoon to get ‘er done.

Because this project took so friggin’ long (and was actually a pretty big undertaking considering how wood intensive this fence is), I’ll be breaking up the planning, building and finishing up into a few posts.

Here goes the first one: The Plan

My parents have a very large, very underused, very strangely designed side yard 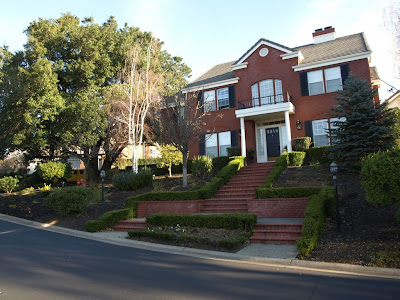 See that HUGE, beautiful oak tree? Wouldn’t that be nice in your BACKyard? Instead of the mud pit of a side yard? I would think so. Especially considering there really is no reason not to include this part of the property into the back 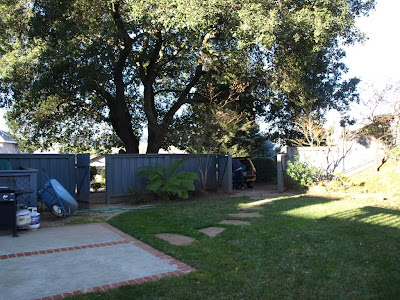 So that was just the plan. Take the underused (and by underused I mean not used at all) side yard and incorporate it into the backyard. And really, that tree is just amazing. Another project in the pipeline (very far down the pipeline, we need some time away from this fence to heal our wounds) is to build some benches around the tree 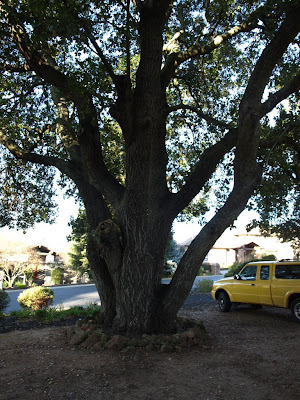 First on the list was planning out the new fence. My dad and Wendy weren’t quite sure yet about how exactly the fence would be laid out so we spent nearly the entire morning of the first day laying out where all the new posts were going to go and how the fence would run into the house. There was much debate about that.

The fence is tall and there is a lot of wood. They wanted to keep the new fence the same style as the old fence (it’s what lines the rest of the property) 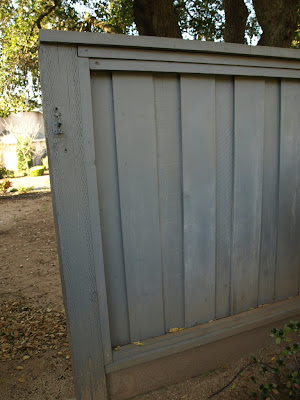 The original fence fell so far back that you really couldn’t see it (ie, it wasn’t a distraction from the house) 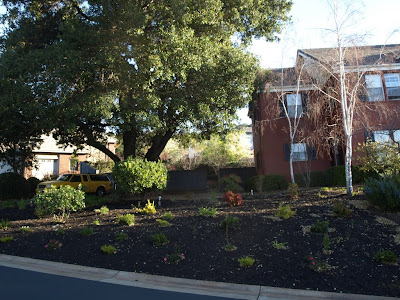 While my parents wanted to utilize all the space they could, I was afraid if you ran the fence into the house from so far out into the yard it would really crowd the beautiful architecture of the house and make things look too full and crowded. As stupid as it sounds (even typing it), I thought the house needed a bit of room to breathe away from the fence.

With the new fence running much further out into the yard, they wanted to keep it straight the whole way and run it into the house next to the first window to the left of the front door 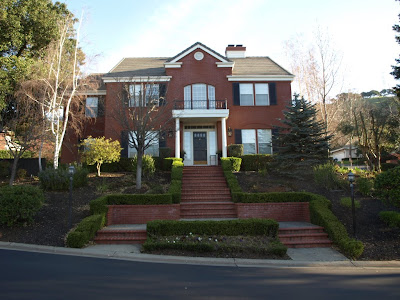 So it would look like this (bird’s eye view) 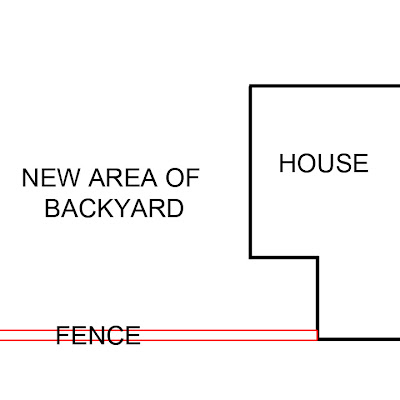 From the beginning I was not a fan of this idea. I thought it crowded the house a lot. And because the house is much higher than the street, I thought the fence would appear a lot larger because you’d be looking up at it from the street. My idea was to make two right angles and run the fence into the house from a bit further back (another bird’s eye view) 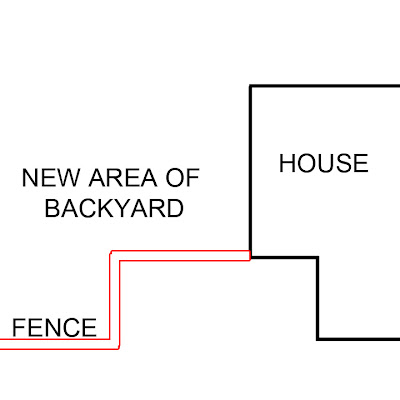 My dad was at work and so Chris and I moved on with planning out all the posts while we all waited for him to come back on his lunch hour. When he came back Wendy, my dad, Chris and I finally settled on a plan: to create those two right angles and run the fence into the house a bit further back. Yay! I was glad they picked my idea. Sure, it took away about 75 sq. ft. from potential yard space, but I thought it would really help prevent things from looking super crowded.

Here we are mapping out the posts 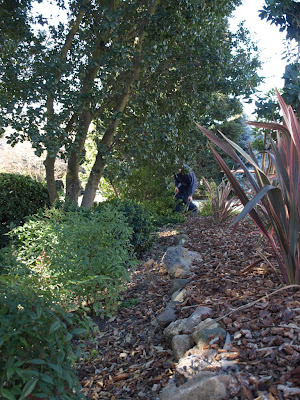 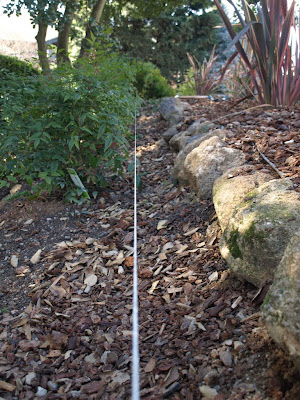 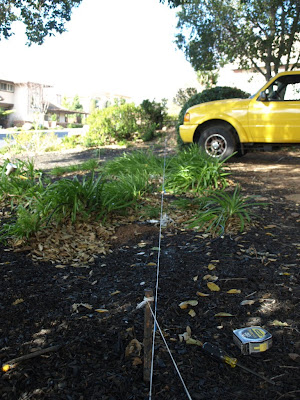 We also worked on taking down the old fence 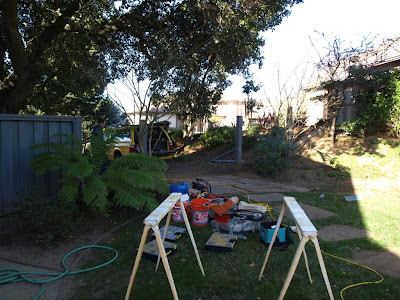 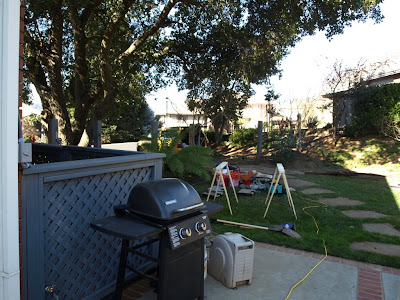 Then came the fun task of ripping out the old 6×6’s (which is really way overkill. For a fence like this 4×4’s really would have been more than adequate. They just made things more difficult and more expensive) 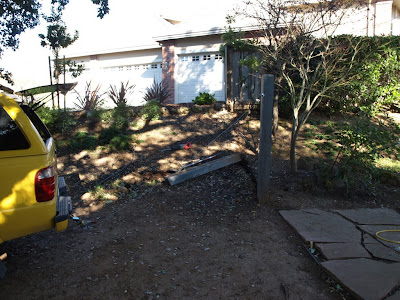 While Wendy was talking to a neighbor and not paying attention to what we were doing — 🙂 hehe — we attached a ratchet from the post to Chris’ truck and ripped out the posts. It was pretty awesome, except when we ripped the cable out of the ratchet. Whoops 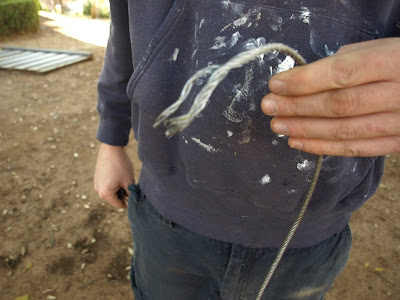 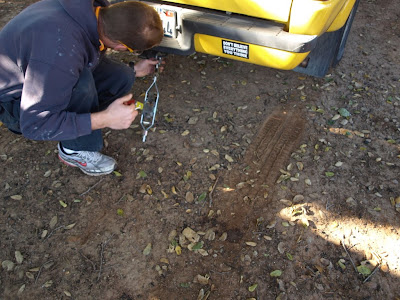 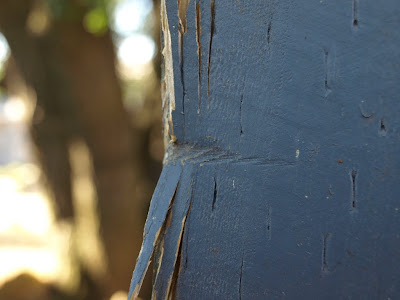 But once we’d lined the exterior of the fence line, marked where our new posts would go, we were ready to get started.