When I was pregnant with Zoe I decreed that I didn’t want any pink stuff. I knew that LOTS of people would get pink things because I was having a girl, so I asked the people I was close to not to get her more. We stuck with black and gray for things like car seats and strollers and green and yellow for sheets, highchairs, towels, etc. I’m a tomboy and a lot of the guys I worked with at the A’s thought my attitude about this was hilarious. They asked what would I EVER DO if I had a girl who liked pink and ballet because I was rejecting pink in the beginning so much? These were my thoughts:

1) dresses on little babies are just plain stupid to me, they get in the way of their movement and they literally make them fall over.

2) I have no problem with pink. Or purple. My problem is that people feel SO COMPELLED to get pink pink pink pink pink and tutu’s and tule and giant headbands the second they find out you’re having a girl. There are A LOT of different kinds of girls out there. They don’t all like pink, they don’t all like headbands. And I feel like this same behavior isn’t the norm when you’re pregnant with a boy. It really frustrated me.

3) I wanted Zoe and Merritt to figure out what they liked because they actually liked it. I put them in pink. I put them in blue. They have doll toys. They have car toys. I want to expose them to as many different things as I can and let them decide. If they decide they love pink and love ballet on their own, well, then I’ve got to learn what plie is and learn that it’s not appropriate to scream from the audience during a recital.

Zoe has decided that she likes pink. And purple. She also likes going to Raiders tailgates. She is very assertive with her opinion about things. I love her opinions. And I love her self confidence. So you know what, I had to swallow my pride when it came to painting Zoe’s room, specifically her closet nook 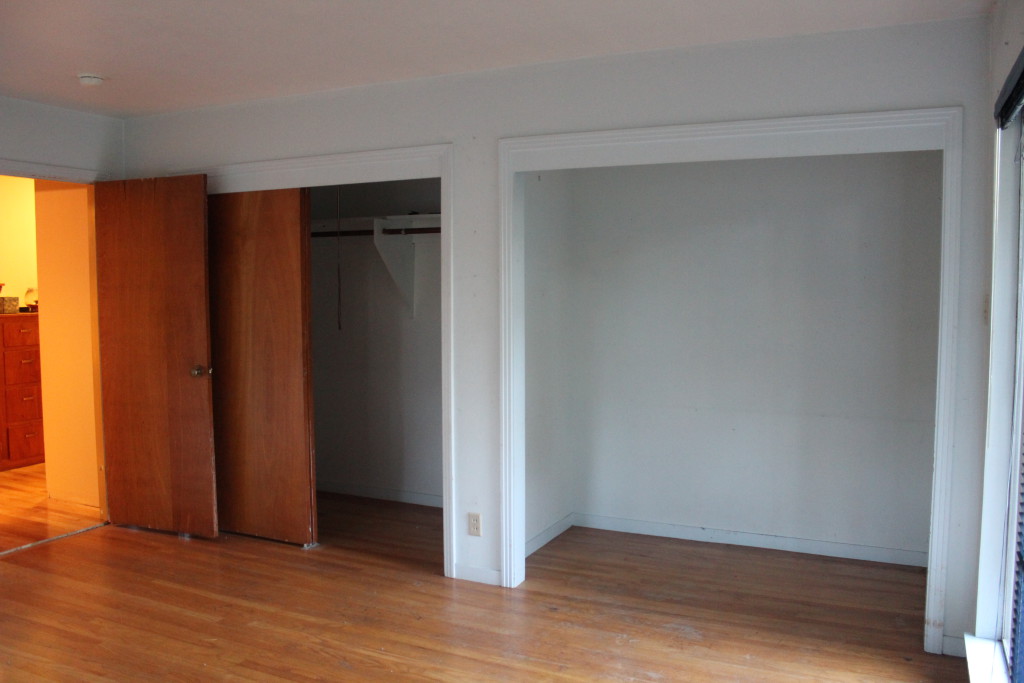 Her room is an excellent exercise in releasing some control for me – allowing Zoe’s opinions to rule more of the roost. Purple seems to be her favorite, but she also picked pink for the back of her bookcases. Originally I thought about painting this nook the same color as her room, but only got a gallon, so I didn’t know if we’d have enough. Instead I decided on a little experiment 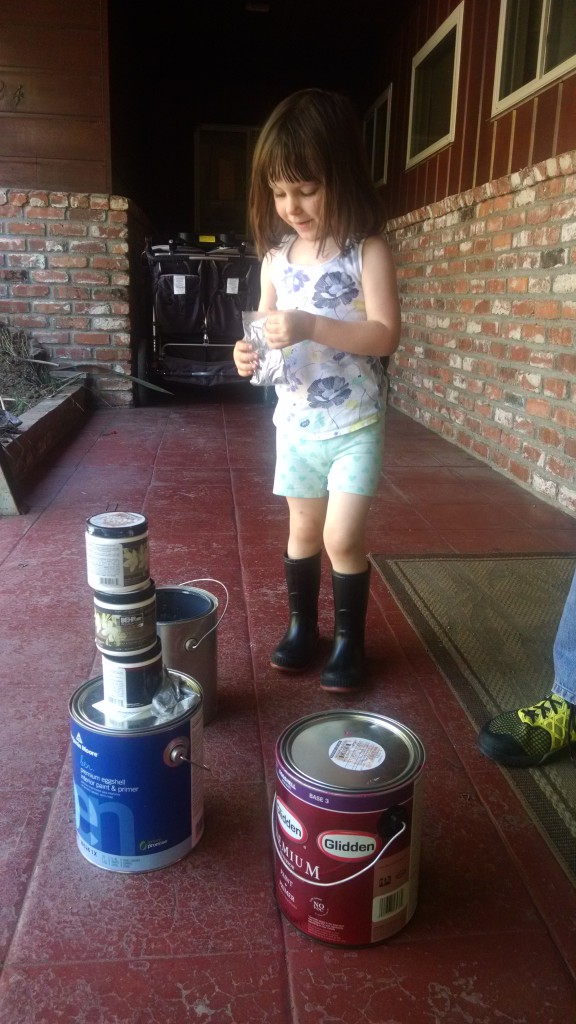 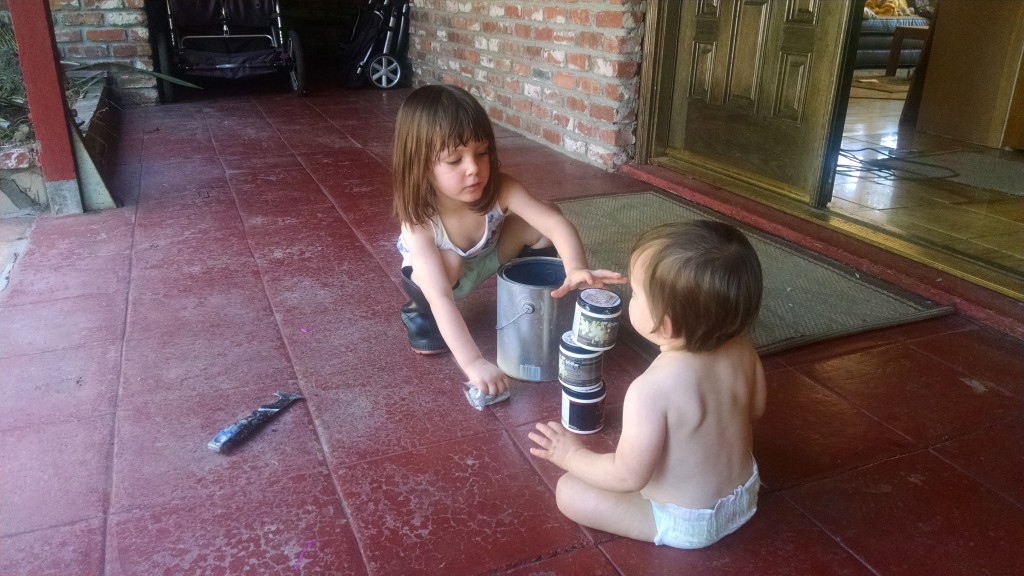 I took an extra gallon container we had and decided to mix a custom color for Zoe with samples and other paint colors were had around. Zoe thought this was FABULOUS 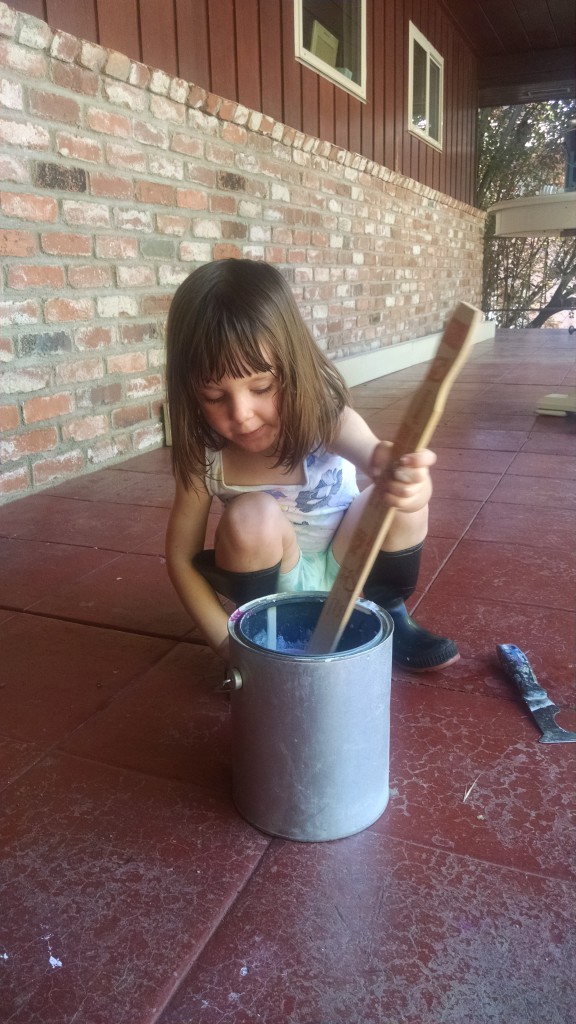 AND we mixed in some sparkles too. That’s fucking right: sparkles. Zoe really likes sparkles, so I bought a sparkle additive that you mix in to give the paint shimmer. HOORAY! A fun little treat for this cool little nook.

Working on the house with the kiddos has been a challenge for me. My step dad has been taking Zoe a lot of Friday mornings lately, but last Friday I asked if he might stay at the house and help get the nook painted. He was all for it 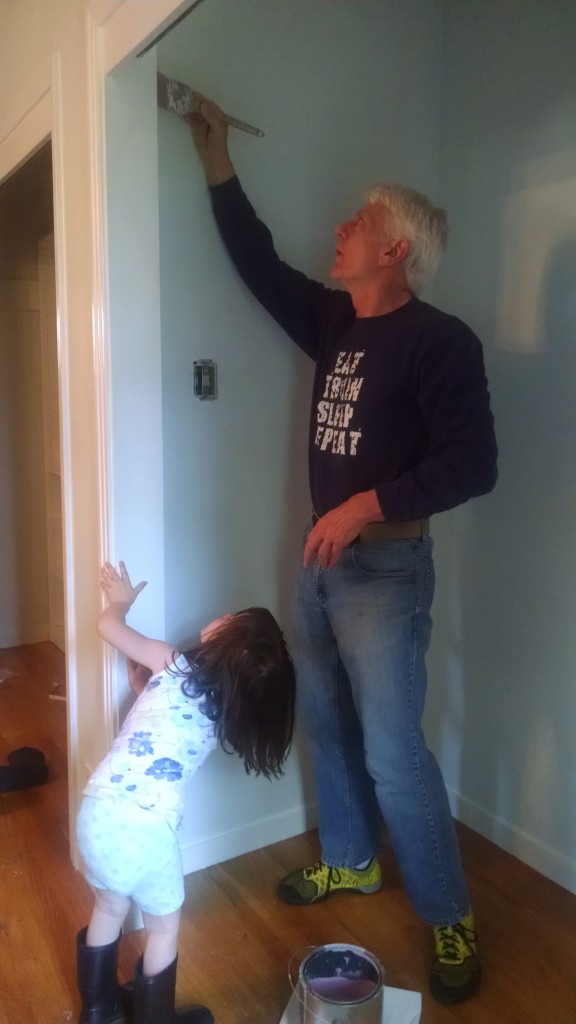 Over the course of about 2 1/2 hours Clarke got the cut ins done and rolled it. Children were obviously involved as well

It’s sometimes a big headache, but I really try to let Zoe be involved in projects 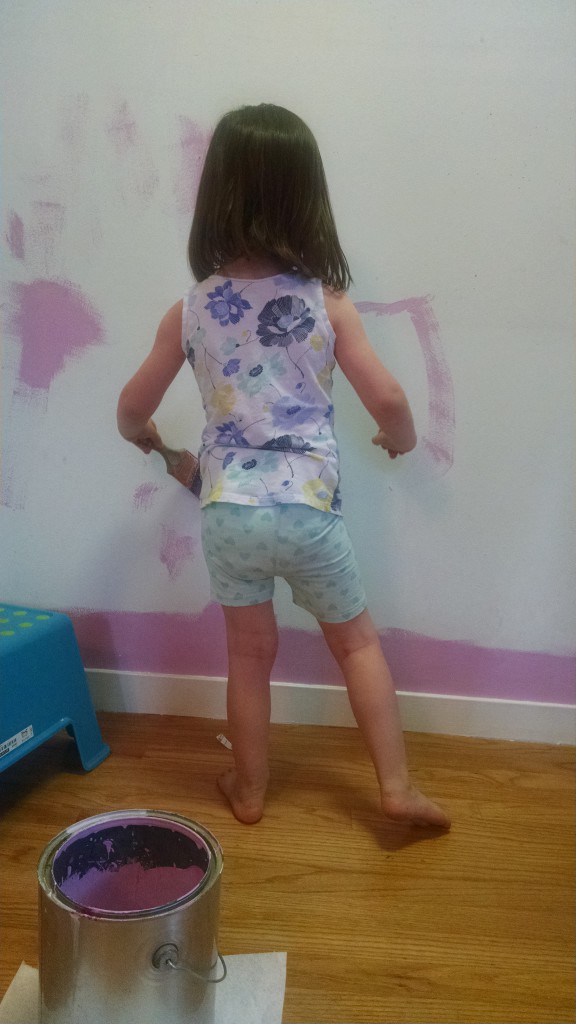 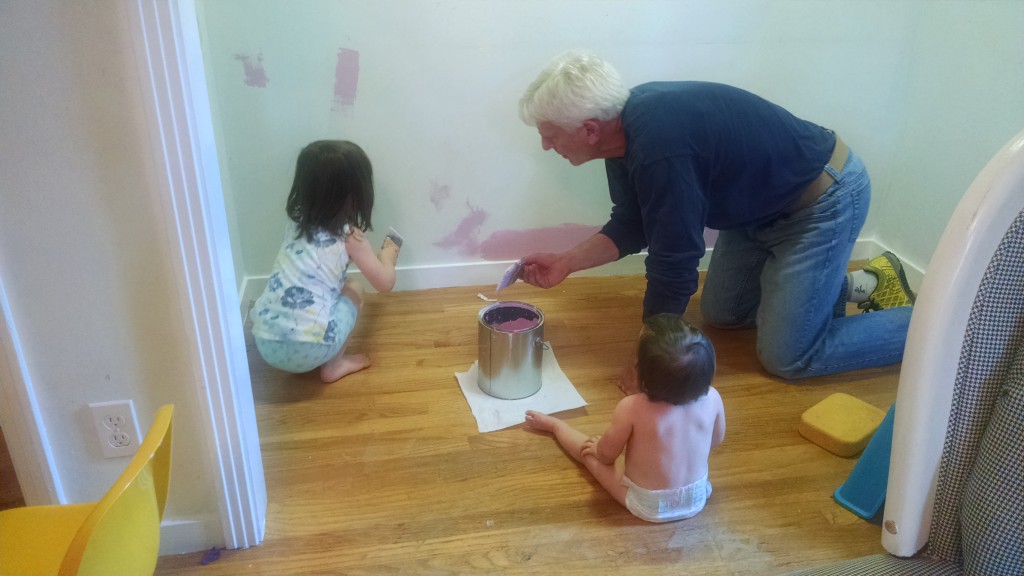 There was definitely a lot of use of the sponge cleaning things up, but she really enjoys helping and I want her to love her room and love taking part in the process. So I sort of just take a deep breath and go with it.

It was all painted and dry by nap time, but i still left things out to make sure it was all 100% before the furniture went back in and things got hung up 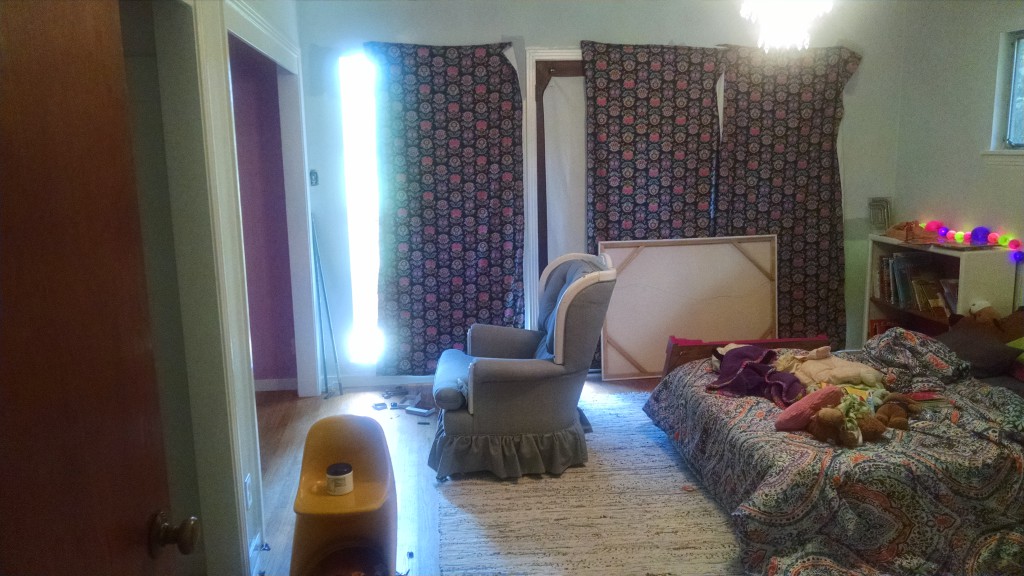 Then it was just a matter of getting things up on the wall which I am of course not going to share with you because we are SO CLOSE to the final “after.” 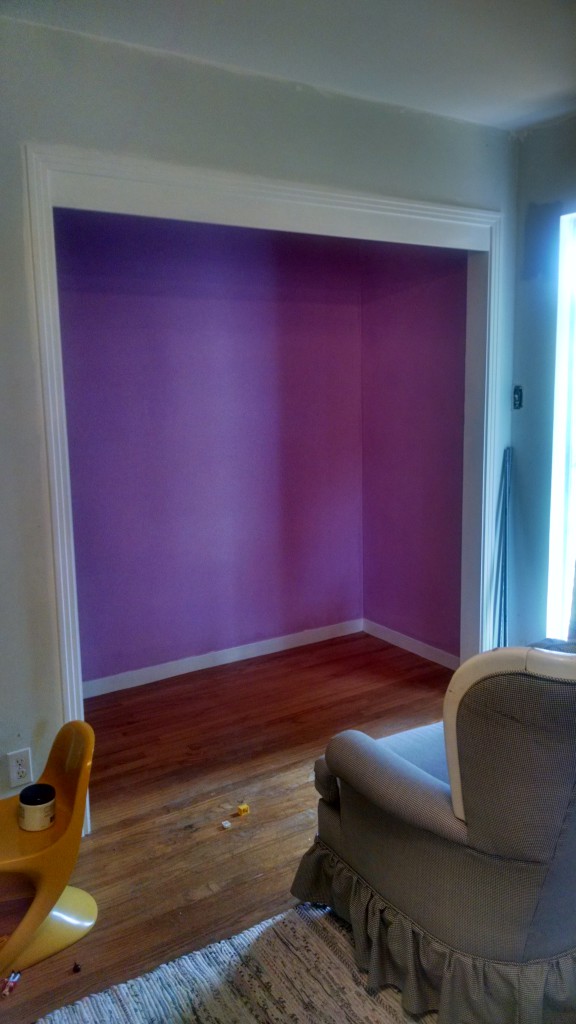 We just need to get the paint up on the rest of the room and hang everything up. SOOOOOO CLOSE. And to think I wanted this room done before we moved in, ha!