I’ve talked a lot about Zoe’s love for food in her monthly updates, and I think her immense love deserves a post all its own 🙂

No two ways about it: Zoe loves food. We were advised by our doctor to introduce food a little earlier than the 6 month mark because she was just so damn interested in it and because she was a big girl. She was super excited to get started 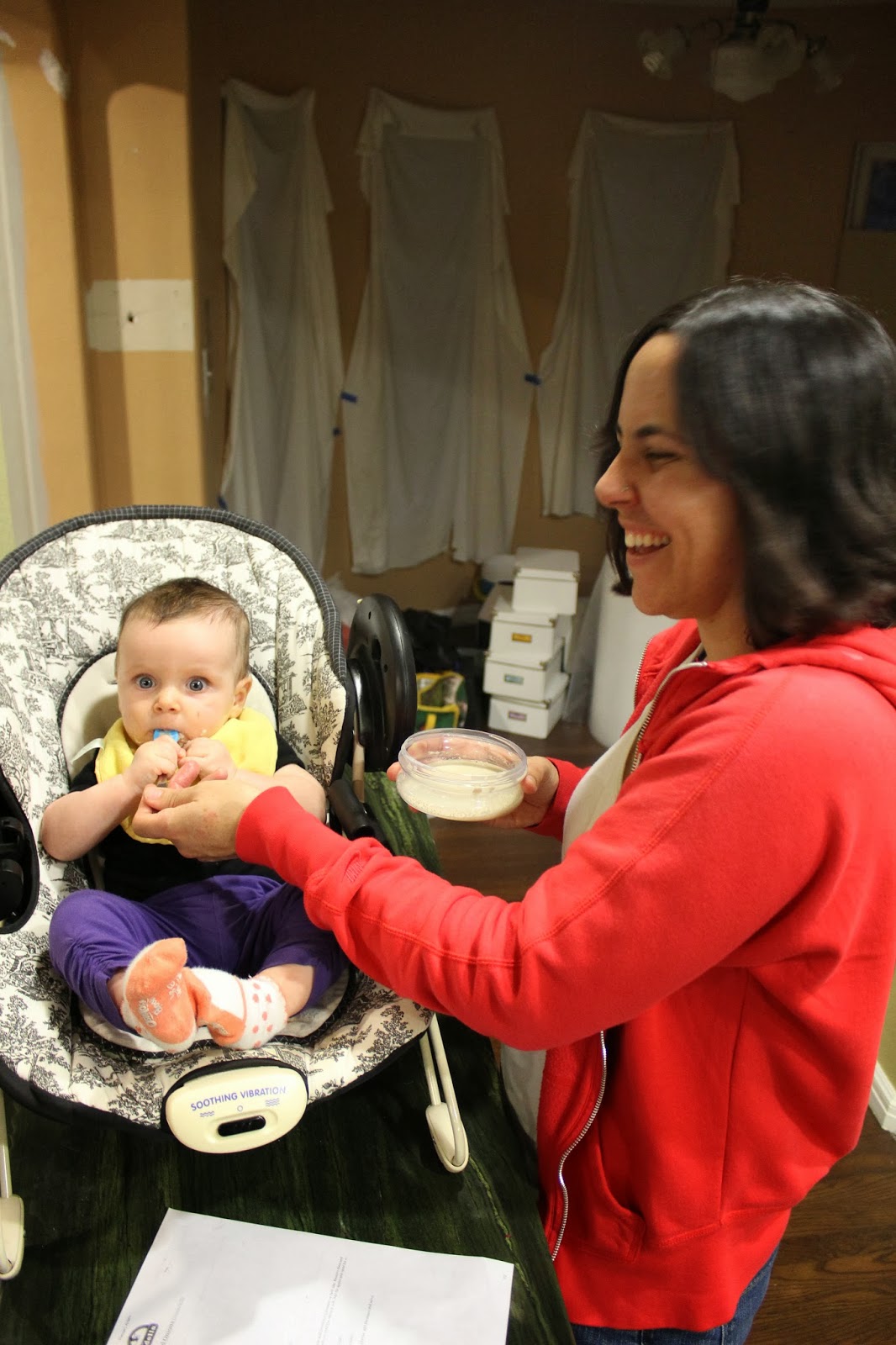 And ever since then we’ve had a lot of fun introducing new foods to her and having her develop a love for food. I must admit, I know we are very lucky to have a kid who is so eager to eat, excited to try new things and likes to eat what we’re eating.

We started off with “baby food.” There was oatmeal cereal and banana, but pretty quickly it seemed like Zoe was a little bored with that, so we moved on to avocado and Plum organics food (thanks to lots of your suggestions). We started with one ingredient packs, but honestly, after about a week Zoe was still grabbing so much for food that we moved on to two ingredient packs. She was all about food, so we figured we would just dive right in.

We started off feeding her, but around 6 1/2 months we tried finger foods 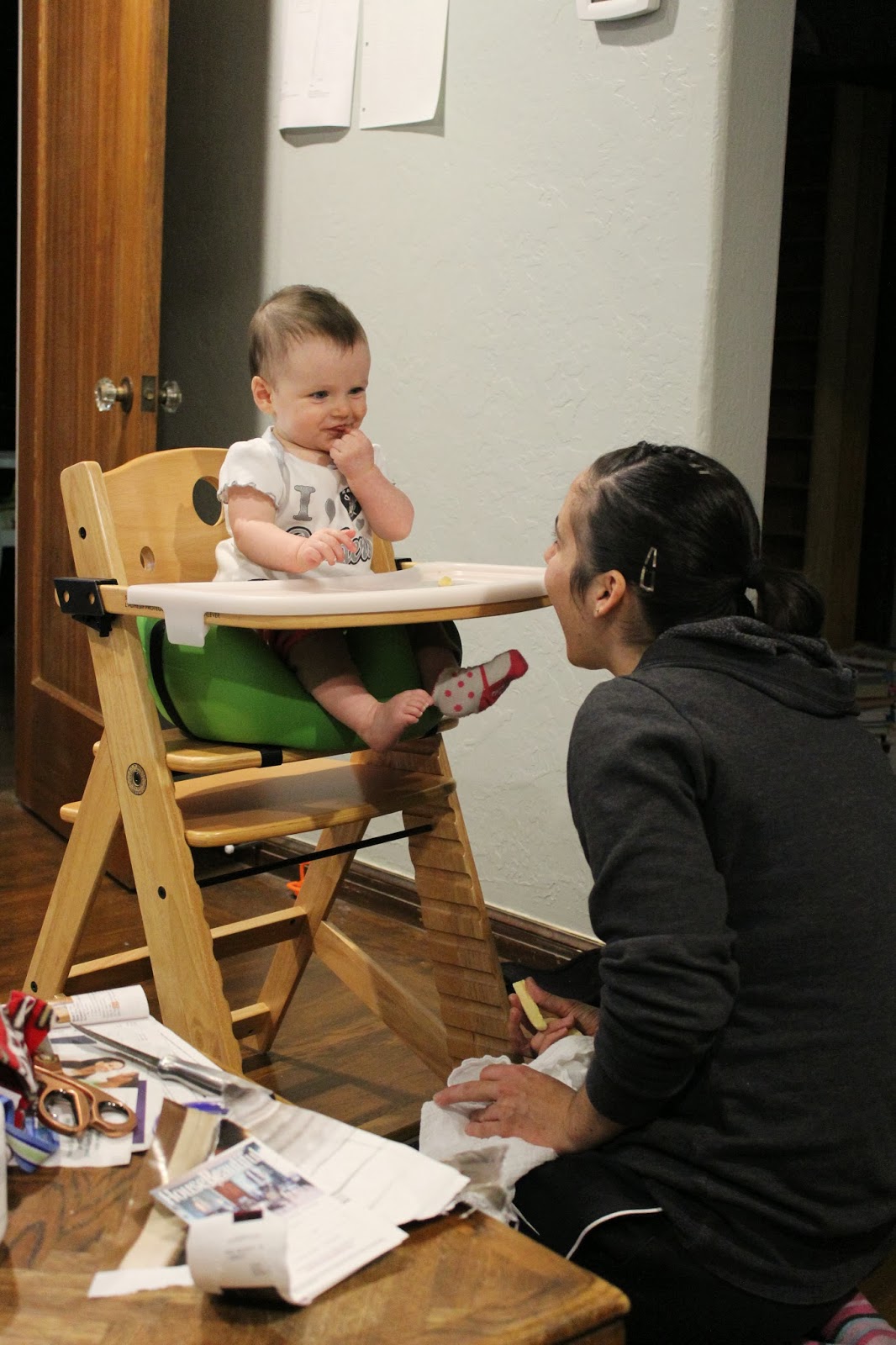 Banana was first and then we quickly moved on to mangoes. Chris is allergic to the skin of mango, so I made sure it doesn’t have any skin on it just to be careful, but she loved it from day one. The hilarious part was that she had a little difficulty with the fine motor skills in the beginning, but was so eager to eat that she would just face plant on her highchair to get to the food 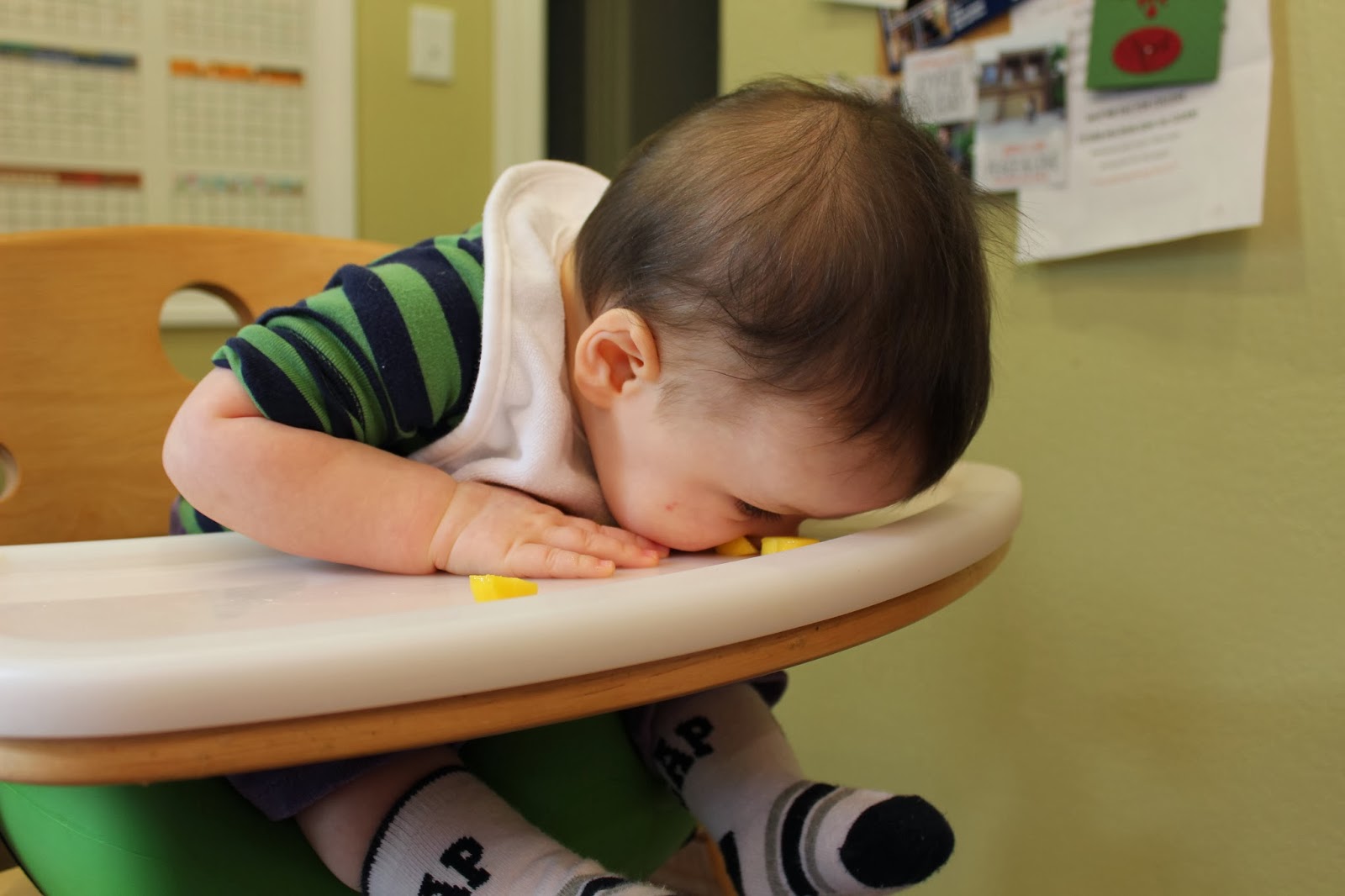 She got pretty good at it (and still does it sometimes when things are really slimy). She’ll move the food she wants into a pile with her hands and then -BOOM – face down on the highchair and sucks it up. It still cracks me up 3 months later.

In those early finger food days I tried berries too – raspberries and blackberries. Those were quite tart for her and got her really messy. But she seemed to like them 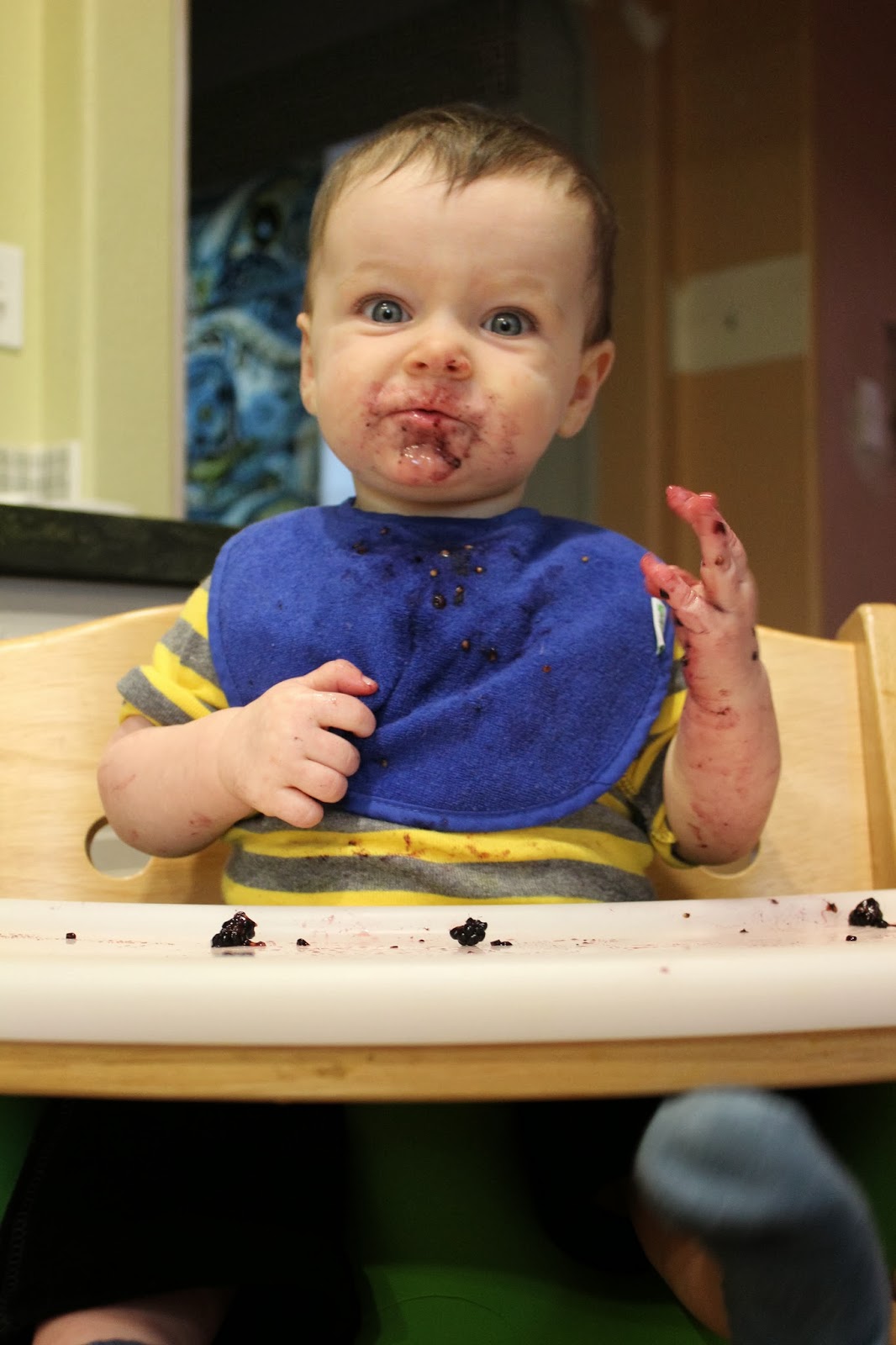 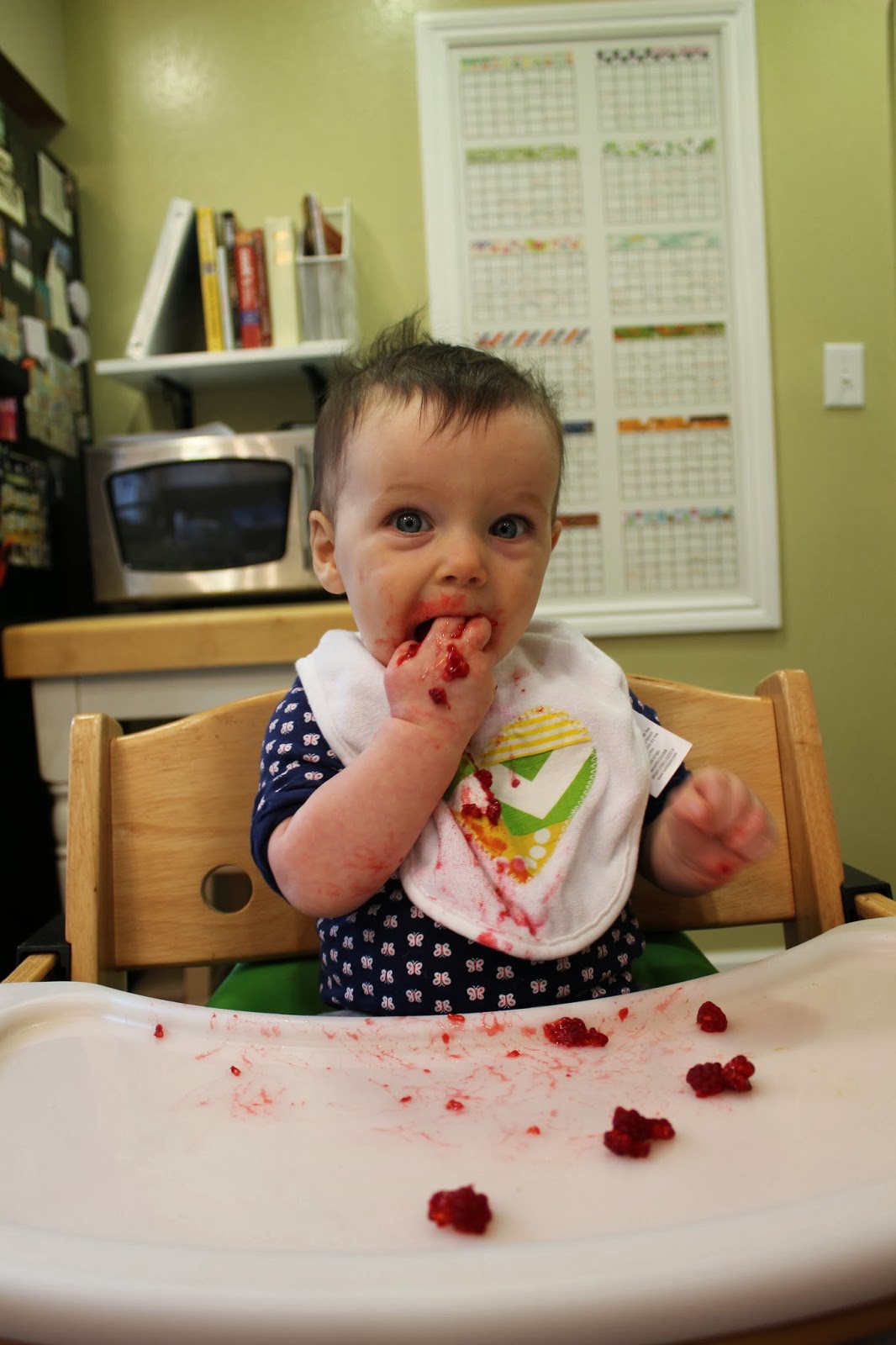 And it quickly just spiraled into eating everything awesomeness. When we took her out to eat with us she was so interested in what we were eating that we would give her things off of our plate, and she basically tries WHATEVER you’re eating. Seriously, it’s quite amazing. Now she’s an official eating champ.

In the morning she is HILARIOUS. When I put her in her highchair when we wake up (after I’ve nursed her) she literally starts grunting and banging her hands on the table. If she sees you reach into the bag to get Cheerios she starts to freak out even more 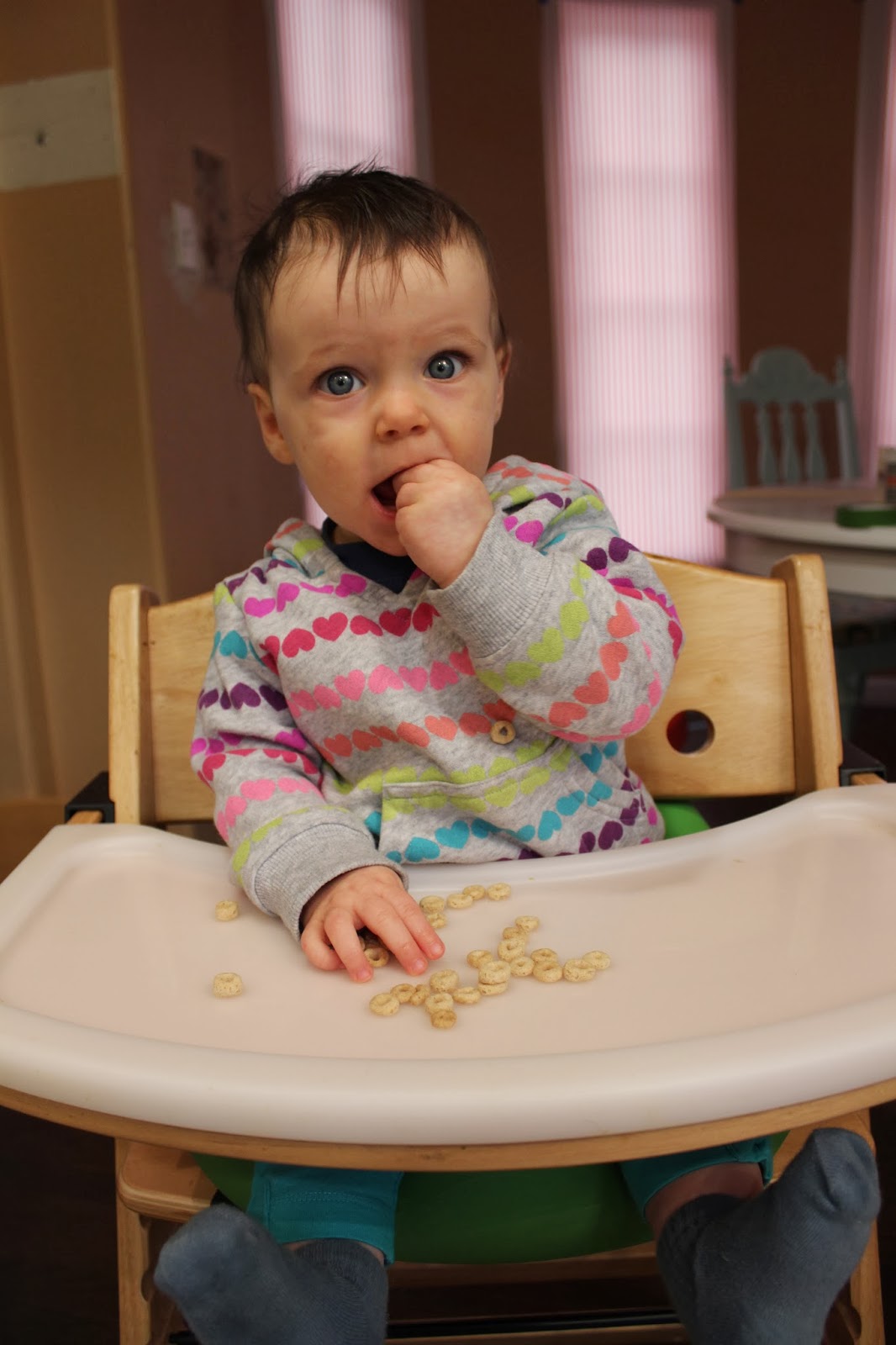 She will take a HANDFUL of Cheerios and just shove them in her mouth. Just thinking about it now makes me laugh. It is so fucking funny. In the mornings we do Cheerios, then raisins, then some fruit (usually bananas). And all three of them she just goes ballistic about. Raisins? More grunting. Hearing me cut up the banana? Lots of grunting. And it goes on all morning long. She just fucking loves it. When I bring it over to her she gets so happy and kicks her feet around, makes happy grunts and immediately shoves it in her mouth when she gets it.

But it’s not just breakfast – every meal and every snack is just a party waiting to happen. And heaven forbid she sees you eating and not have food herself – get ready for a little miss cranky pants. She could have just eaten a huge meal and just the sight of you putting food in her mouth you would think she hadn’t eaten in about 3 months. Grunts, hand banging…food monster comes out.

She’s hilarious to go out to eat with

And we take her out with us and with our families all the time. We bring food for her, but I also keep in mind whenever I order that she’ll want to eat whatever I’m eating, despite having her own food in front of her. And waiters? Oh my god, they’re her favorite ever. She just STARES at them. She must know that they’re the ones who bring food because she stares so hard at them you’d think she was memorizing their soul. They get a kick out of it too and usually wave a lot and talk to her, which in turn Zoe loves even more.

Chris and I joke that if CPS ever came to our house they would think that she never got to eat anything because she will literally bang on the table and grunt for food whenever she sees it. She could have just eaten an entire banana, a pouch of Plum food and a bunch of raisins, but, “OH MY GOD GIVE ME THAT STRAWBERRY,” and grunting and pounding ensue. Seriously, the girl just loves food. I feed her 4 meals a day, still nurse her and give her snacks throughout the day, but just the thought of food gets her all jazzed up 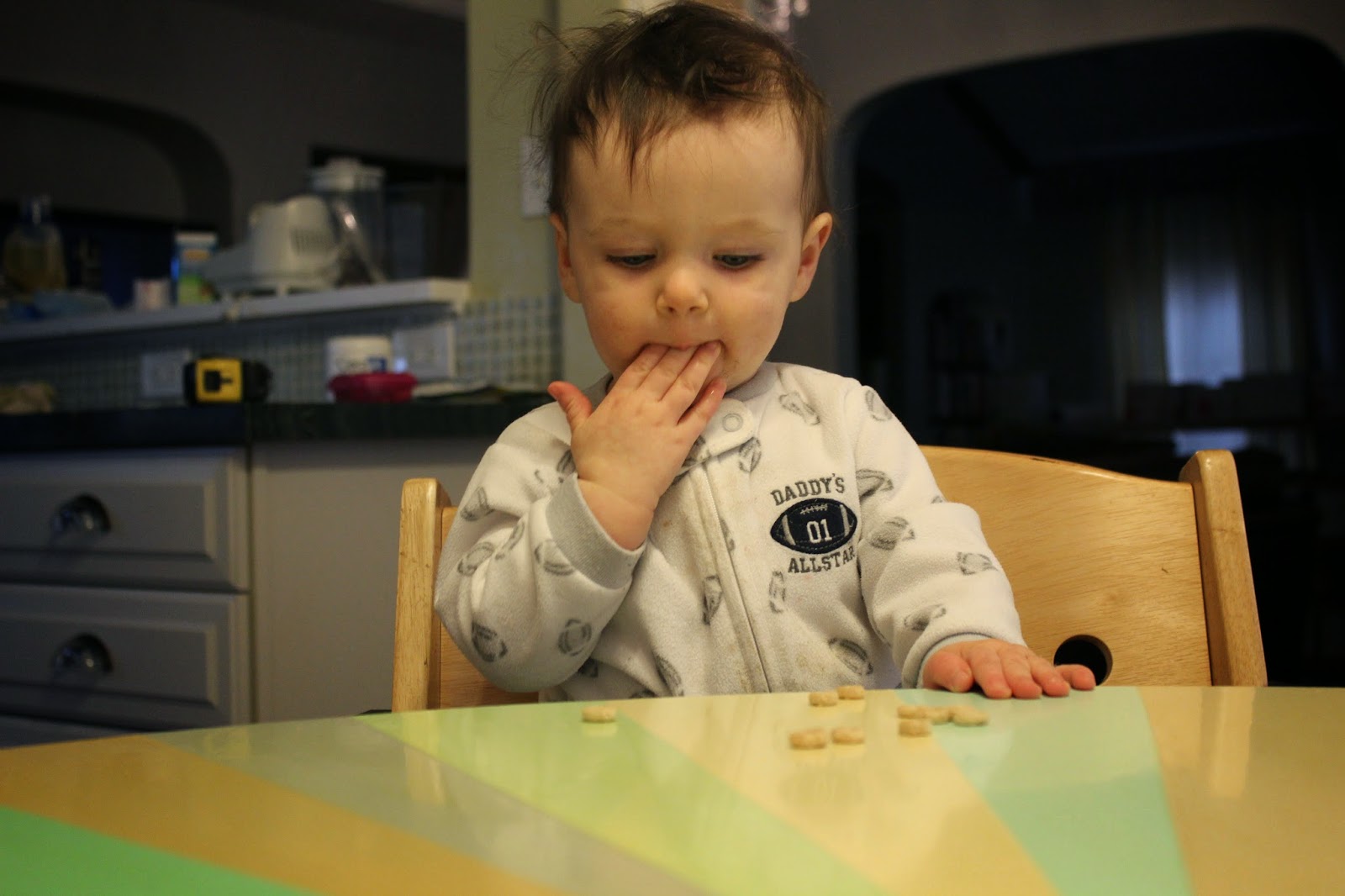 And miss crazy pants will try just about anything as well. Some of the weirder things: pickle, wasabi, jalapeno, red onion, some exciting sushi dipping sauce, and probably some more that I can’t think of. She will literally try anything you’re eating. It’s hilarious because she’ll put it in her mouth, taste it a bit, take it out, look at it, and then put in back in. If she doesn’t like it she’ll take it out and fling it on the ground, but most things she’ll eat at least once and then decide whether she likes it or not.

We haven’t found many things she for sure doesn’t like, they really seem to only be avocado, peaches, corn and peas at the moment. I keep trying the avocado about every 2 weeks, but she still doesn’t seem to like it at all. That’s really no problem for me because I LOVE avocado, so that means more for me 🙂

The things she loves are: strawberries (OMG the sight of them…), banana, mango, applesauce, cheerios, raisins, apricot, pomegranate, black beans, red beans, rice and cheese. She loves most of the Plum organics pouches too, but doesn’t seem too fond of the apple, spinach and peas one. I thought the apple mixed in might trick her, but she still rejected it 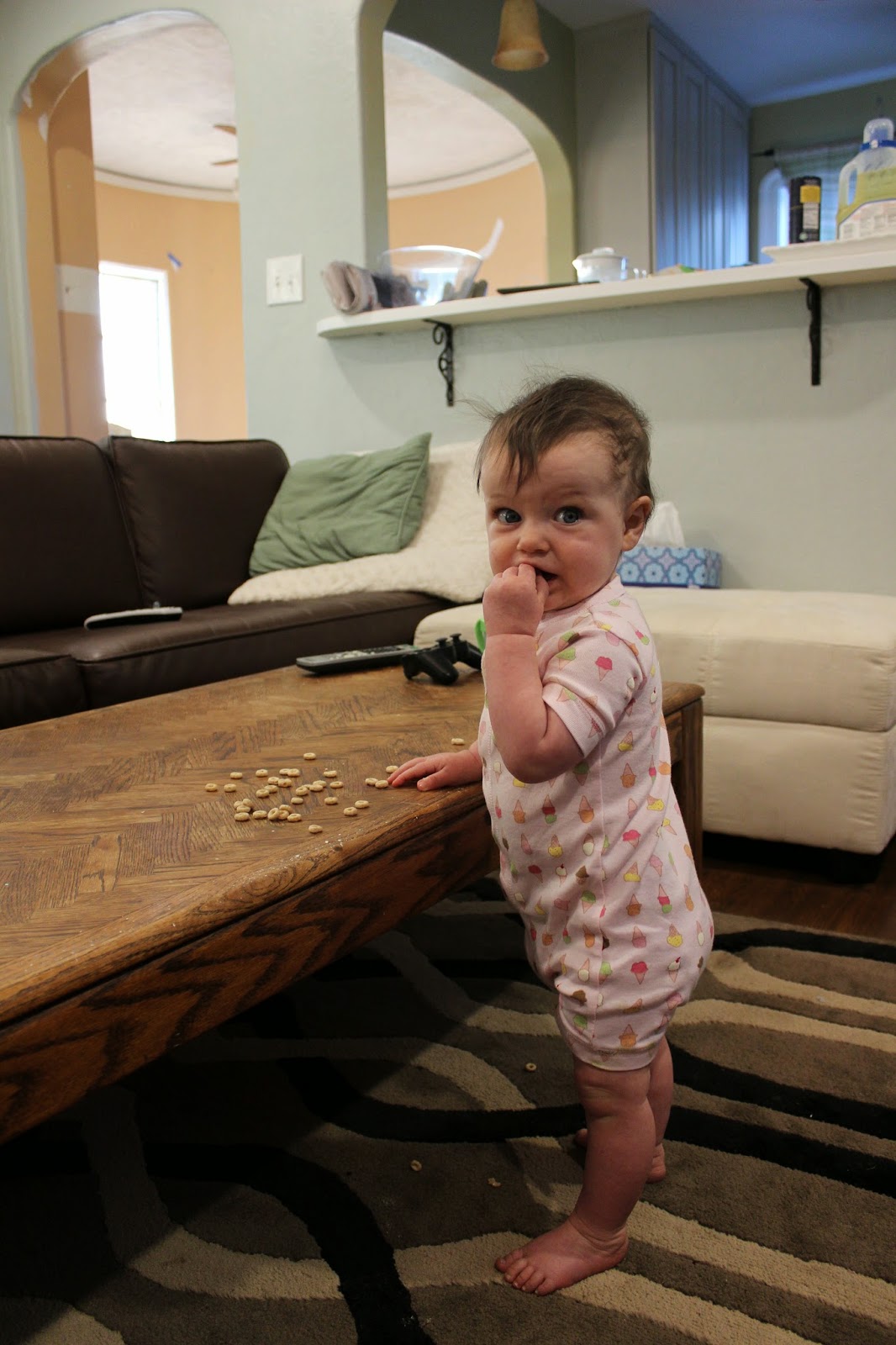 So that’s our little garbage disposal 🙂 I love how much she loves food and I hope that never changes. Just like her momma 🙂

« Mohawk Home Rug Review & Giveaway
And Now, on to the Backyard »