Wouldn’t it be so nice to finally get to call this room done? It would. But we’re not there yet. CLOSE! But not there.

The first thing I have done though is organize the wonderful cabinet. WONDERFUL cabinets. I love those things 🙂 One thing this house doesn’t have is too much storage, so it’s really nice that this room has sooooooo much storage. We have 5 cabinet areas that are empty. One was taken up with the laundry chute 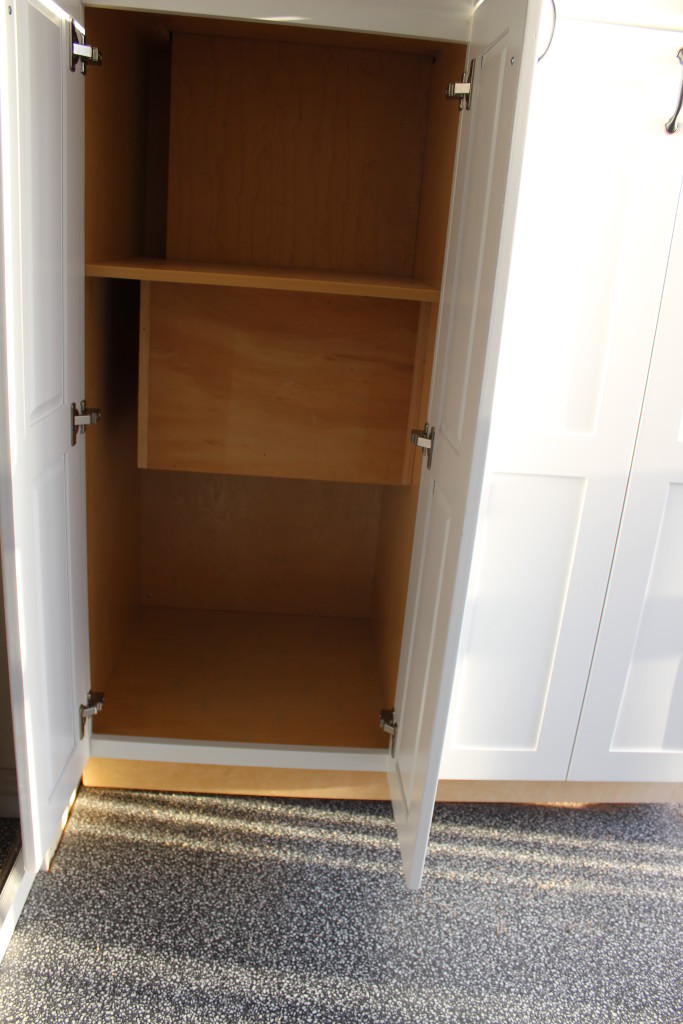 We searched for a hamper that would fit in the area, but it’s kind of a strange size so we actually decided to just go without one completely because it’s right across from the washing machine – maybe only 3 feet away. So it actually felt like getting a hamper would be a waste of money 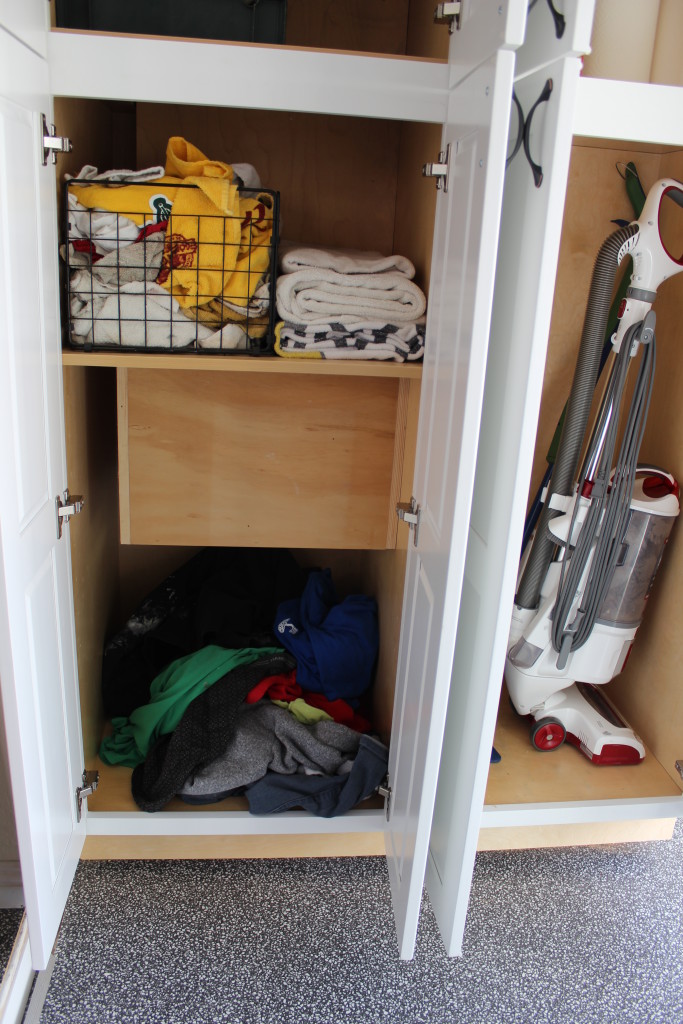 The other 4 areas got filled with: our spare rags, cleaning supplies, vacuum/mop, and then miscellaneous kid stuff 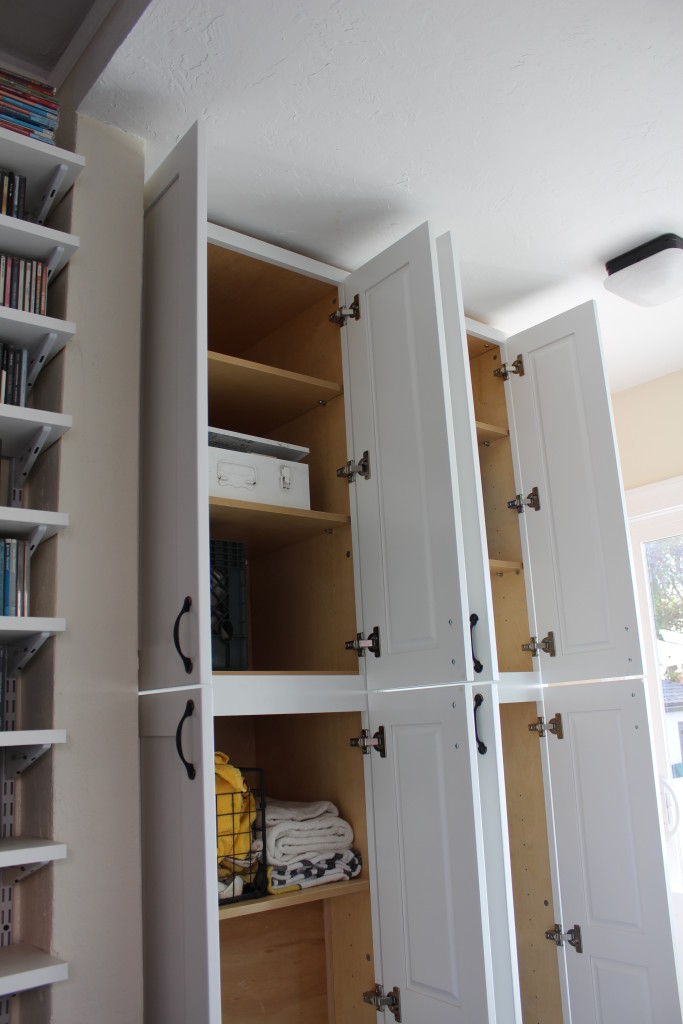 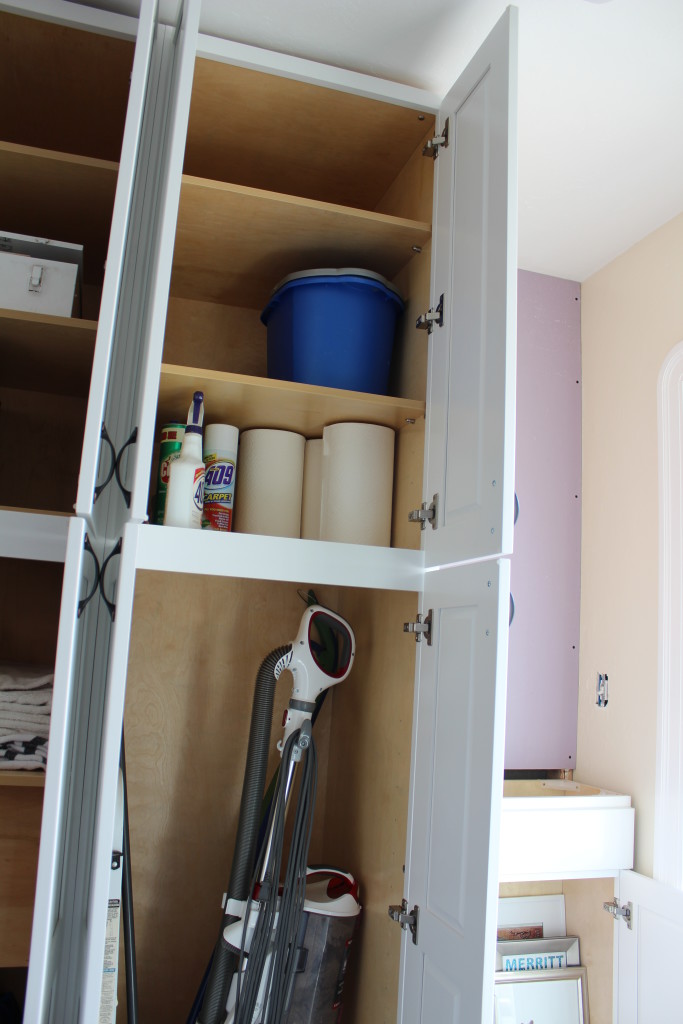 It made sense to have some of the kid stuff in here just because it takes up enough floor space in the house, so any chance we get to put a little bit of it away is nice. The small base cabinet has nothing in it 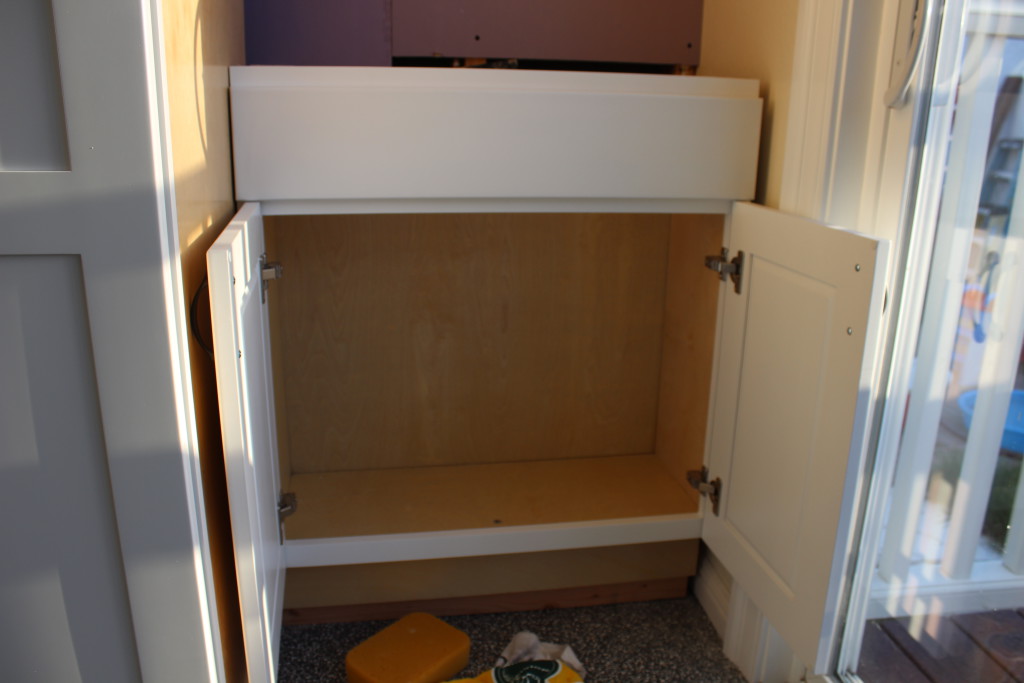 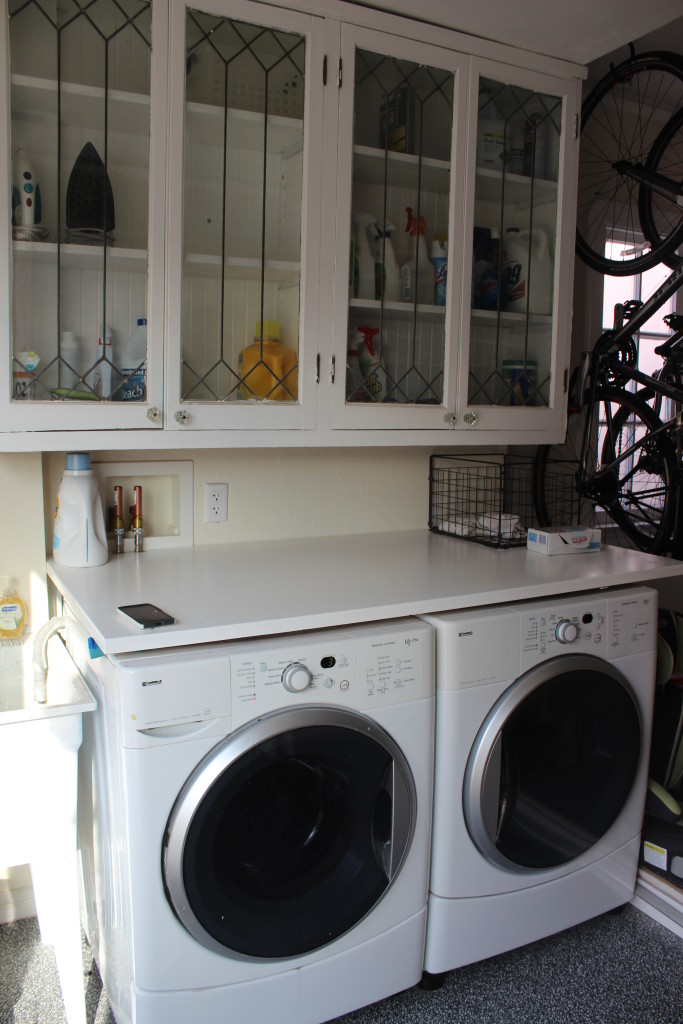 And the other cabinet on the other side of the room 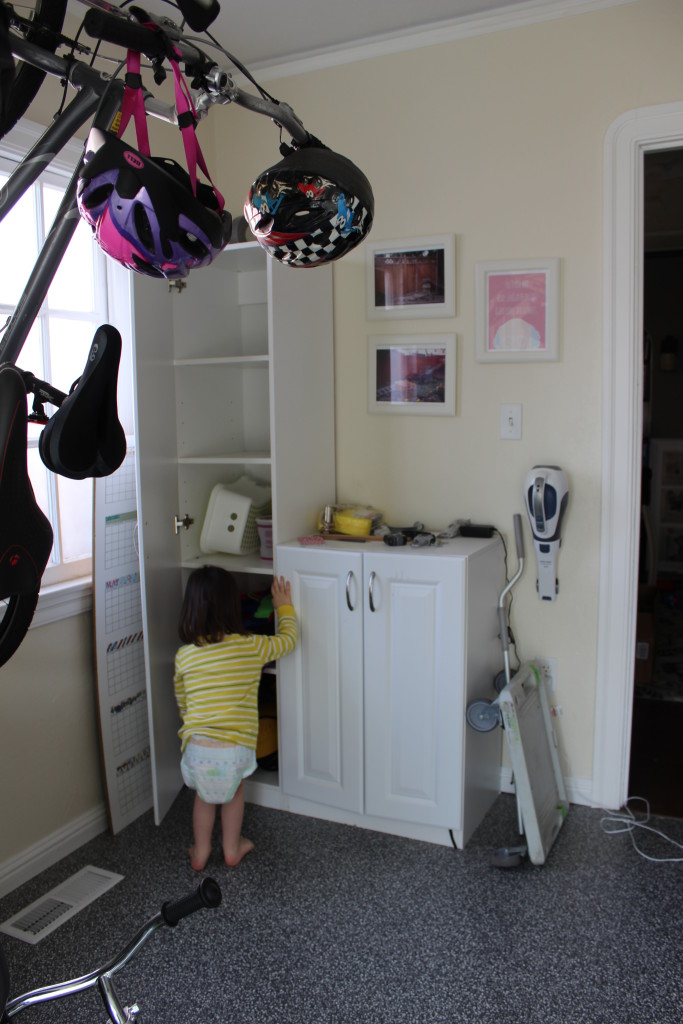 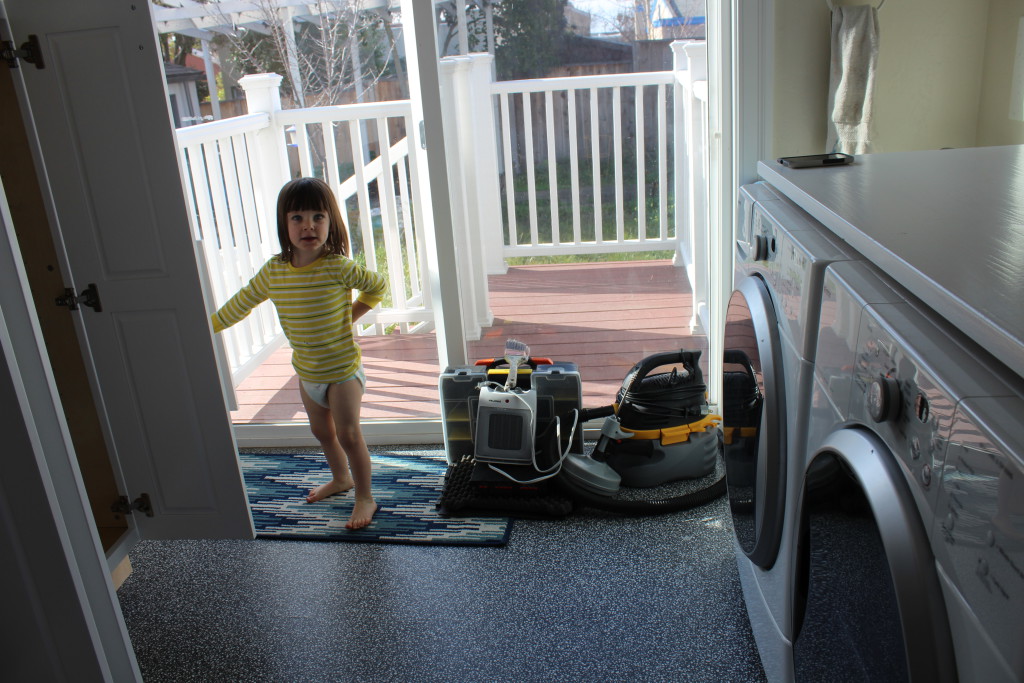 Of course, the other cabinets on the other side of the room are now inaccessible with Merritt’s crib in here. The things we do 🙂

The next items on the list were finishing out the cabinets. What does that mean? We had to put in the metal sheathing, install crown, paint touch up, install base, install a counter top, and put in the floor trim. We didn’t get all the way there, but we’re pretty close.

Because we had to set the cabinets away from the wall a little bit (to account for the box we needed to build for ducting), we had to cover the gap between the wall and the back of the cabinets.

We got a piece of metal fabricated with a bend in it and another that slid into a channel in the bed. That way the corner would be as seamless as possible. The only problem is that for some reason we mis-measured and the metal that came was just SLIGHTLY not fitting. So  Chris had to cut it down a little bit. He also cut for the outlet cover. Then he put it up in place 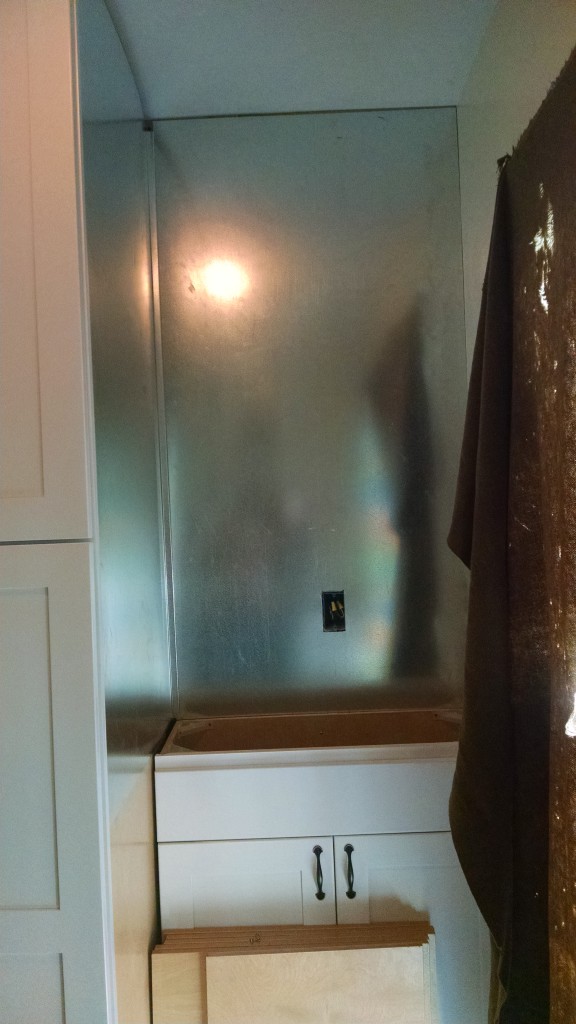 It looks like it fits, but the sheet against the cabinets had a very slight bow in it, and the piece against the wall was not fitting into the channel properly. This doesn’t look like a huge deal, but because we’re installing picture molding at the top, with the bow in one of the pieces, that means we can’t install molding over the top. After a lot of swearing and a lot of headache, we decided to remove the sheet that was against the wall and just mud and tape there instead. The sheet there was just for looks. We didn’t need it because it wasn’t covering anything bad, we just liked the seamless look with the piece against the cabinet. So we removed it. We decided to just mud, tape and texture there instead 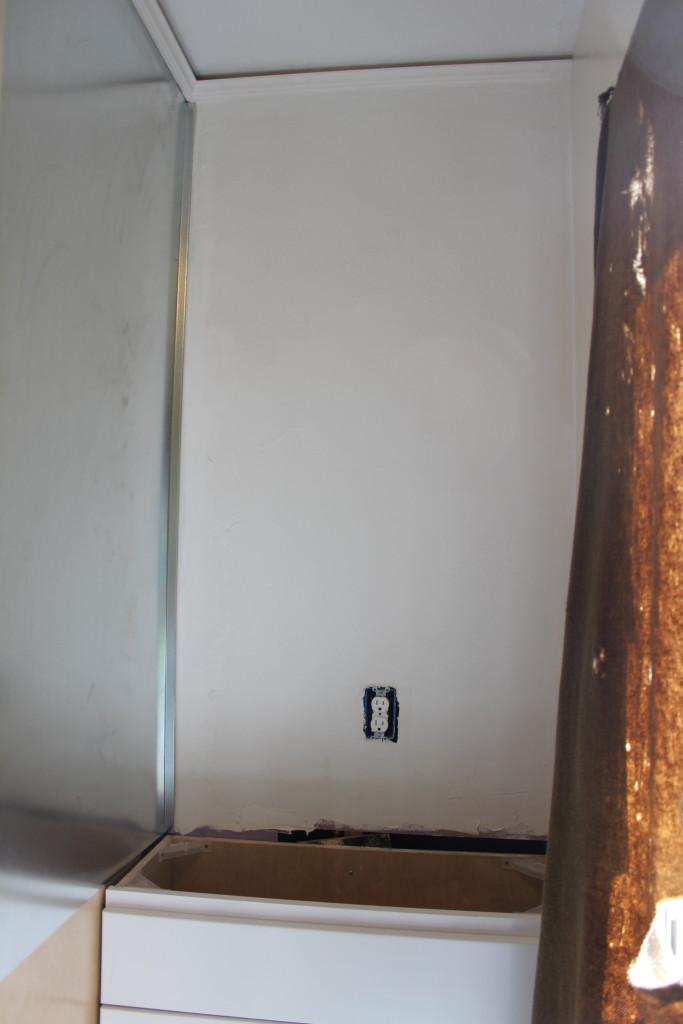 Not the look we wanted initially, but it was so FUCKING annoying that the sheet wasn’t fitting into the channel and the bow in the necessary sheet. Once we took out that sheet, the one against the cabinet was laying flat. And once it was flat, Chris could install the picture molding around the cabinets 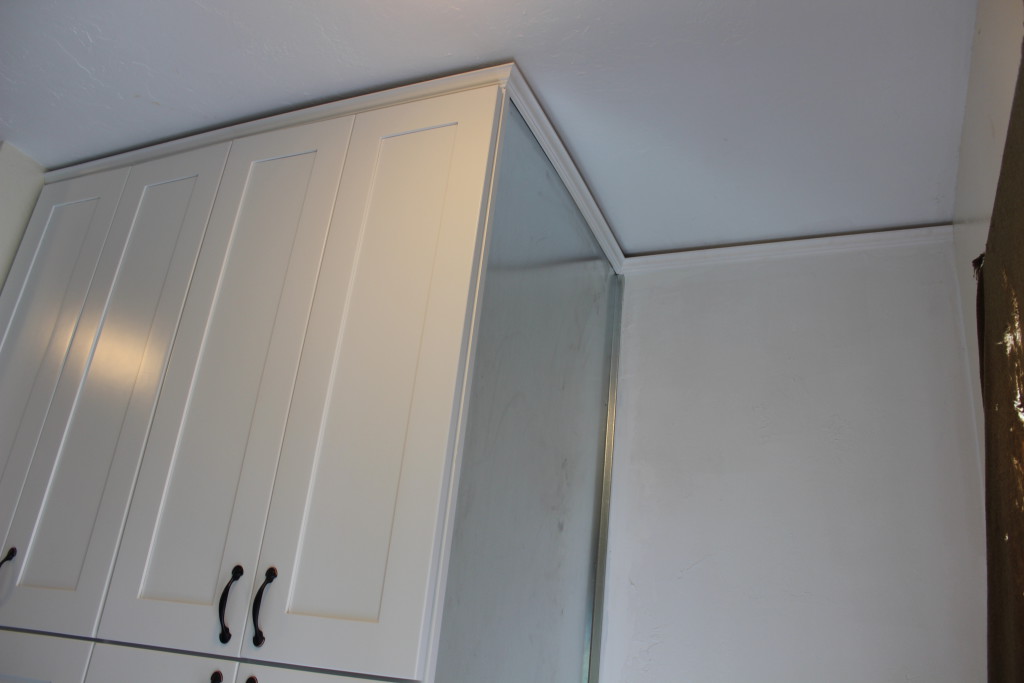 And then he installed the base 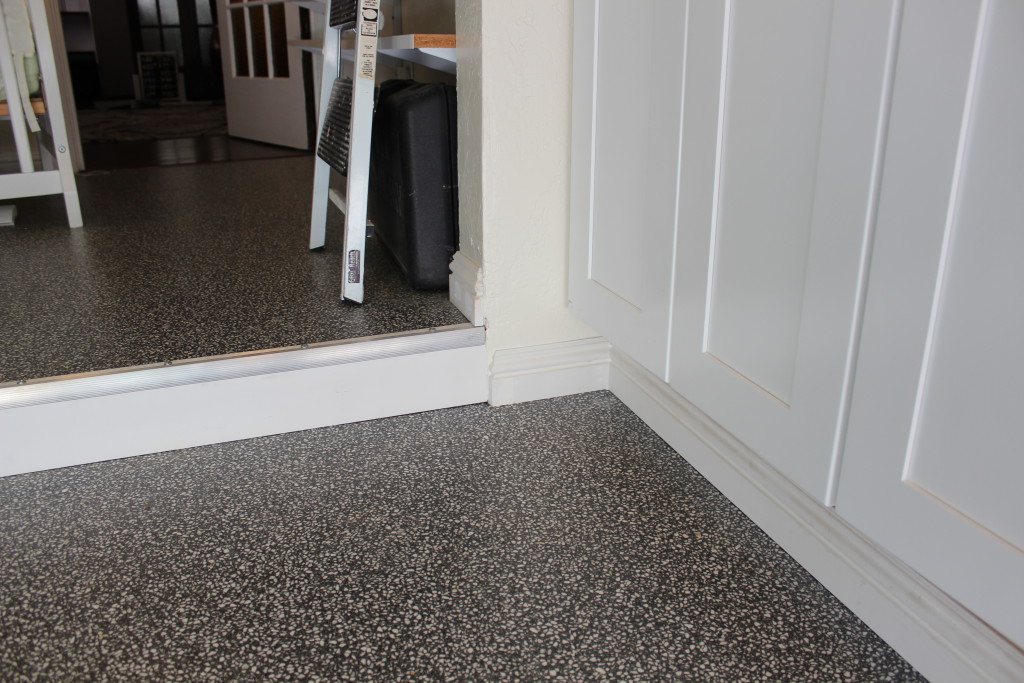 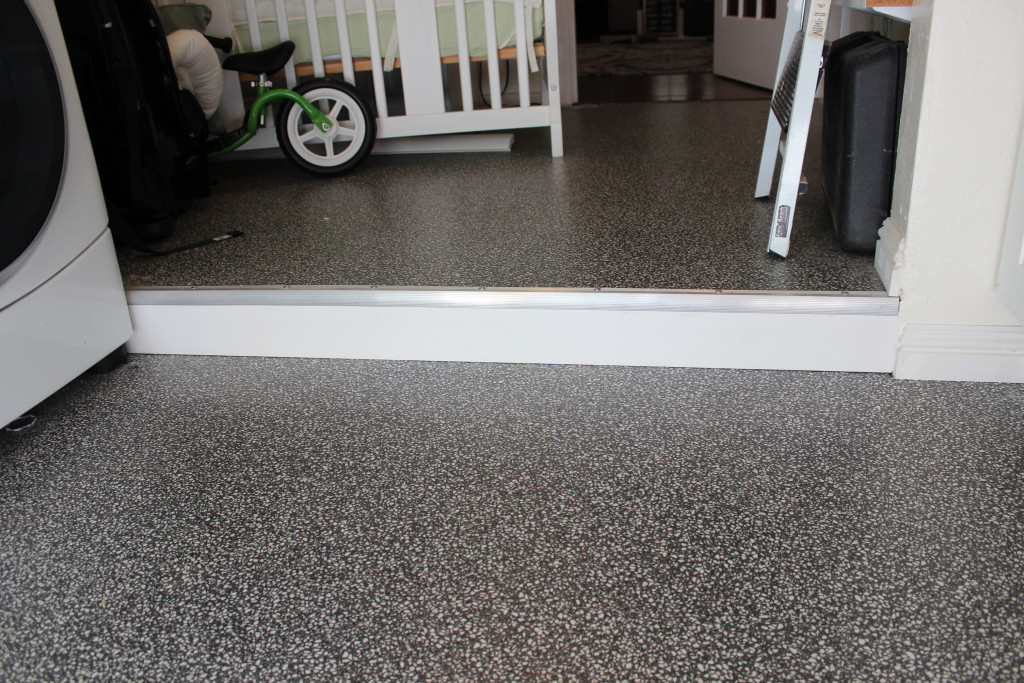 This corner piece has just been sitting on the corner uninstalled for several months. Which means a lot of it being accidentally kicked out of place.

So what’s left now to get it done? Chris did the mud, texture and priming. I’ve got to paint it (and touch up here and there), and then we’ve got to install the counter as well. We’re allllllllmost there. Just 7+ years after we’ve started. I’m not joking either, sadly. We started this room when we first moved in because we brought the washer and dryer in here (it used to live in the kitchen). It will be nice to finally finish it.