Eventually, at some point, maybe in the future, we’d like to FINALLY get to working on the back bathroom. We have of course mentioned it before. For the last 18 months we’ve always said, “That’s the next project.” And then, somehow, some other project pops up. Last January when we demo’d the addition we had planned on quickly re-doing the animal room and then moving on to work on the bathroom 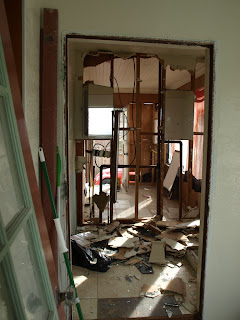 But we finished the animal room and then decided for some reason it was time for us to get the house painted, so we spent several weeks doing a bunch of stuff on our way to prepping the house and then hiring someone to paint it.

We got so excited after the house was painted that we wanted to stick with the outside theme and we moved on to working on the patio.

We finished the patio, but before it was even done I had decided that we would work on the front room and put the back bathroom on the back burner yet again. We thought that it would be quick and easy, but it was definitely not quick and spending nearly 40 hours painting the room and attempting to cover stained floors in our first foray into refinishing floors was a larger undertaking that we had anticipated.

And without even having the front room done we moved on to working on the TV room. I don’t really know how that decision was made (it was most likely by me because I’m the more crazy, irresponsible one) but we moved on to the TV room. Thankfully that room didn’t take forever, though we only have TWO more things to finish and we can call this room done and well, those 2 things haven’t gotten done yet…

After we revealed our Before & After of the yard we’ve sort of been dabbling here and there. Mostly working on finishing up outside projects before it starts raining a lot. We also decided to get the floors refinished while on the trip so we’ve got a 40 item to do list we’ve made some serious progress on. And that list has finally got us working on a back bathroom task. Which may motivate us to finally start working on the back bathroom.

When we first moved in, this was the bathroom we used for almost 2 years 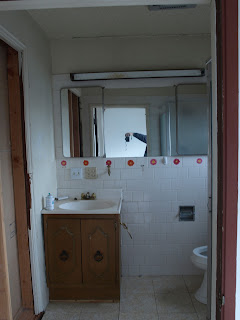 It was really gross. The picture doesn’t due its grossness justice. But when we finished the front, main bathroom I was really excited to not have to shower in there anymore.

The entrance of this bathroom was also really stupid: in the back of the house off of the laundry room. I could understand if you lived in a house that had like 8 bathrooms and you had one stupid bathroom off of your laundry room by your back door, but for this being only the second bathroom in the house, it’s really in a ridiculous spot. So when we planned out the layout for the bathroom after we ripped it all down we decided that this would be an en suite and we would close the wall where the old door used to be and open up the wall between the bedroom and the bathroom (and install a pocket door) and make it an en suite. And because the floors are getting refinished we wanted to make sure that we had a nice transition from the floor of the bedroom to the future bathroom floor. 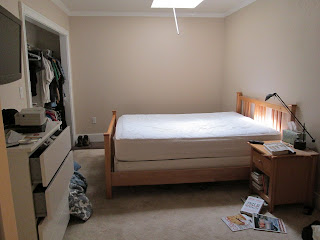 And busted a hole in it 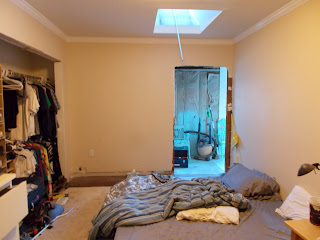 And it’s awesome. I LOVE the light that gets brought in. Of course, when we work on the back bathroom some of that light will get cut down because you can currently see into our backyard from this hole 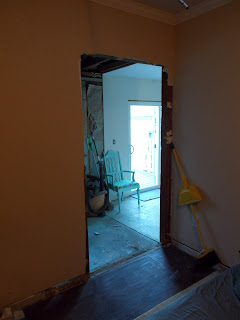 There will be a wall there in the future that separates the bathroom from the laundry room (that’s where the door to get into the room used to be). But we did install a larger window in the bathroom that is up to code for egress (because at some point, some idiot redid the bedroom and took out the window so we have NO WINDOW IN OUR BEDROOM), so that will continue to bring in some much appreciated light because this room is always pretty dark.

It’s awesome to have one of the larger tasks checked off the flooring to do list (really, the only big one left is to bust out for the bigger closet), and the even better news is that this may finally motivate us to actually work on the back bathroom. We’ve only had the materials for it sitting in a pile in the corner of the laundry room for the past 18 months 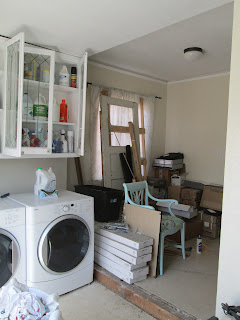 Here’s to hoping!
« Flooring To Do: More than Half Checked Off
The Evolution of a House »