I was a little scared to install the sink because Chris had had so many problems with it when we installed it in the main bathroom. We had formally complained to American Standard (the company that owns Porcher, the maker of our sink) after all the headaches we’d had when we were putting it in our main bathroom. They were incredibly nice, apologetic and helpful and spent several days corresponding with us to remedy the situation and even sent us an additional sink (plus sink faucet, toilet paper holder, towel holder, towel ring and hook) for FREE as a measure of good business and to say thank you to us. When they sent the duplicate sink it had already been modified to fix the problems we were having because apparently the company realized their errors already. (you can read the whole story here) 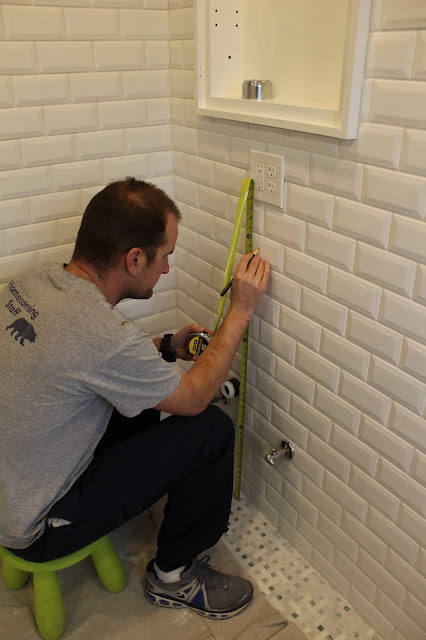 Chris held it up in place to double check and make sure that we liked the placement. When we were satisfied we started marking off the wall (the top line level line of the sink) to give us a good guide when we were installing it and a mark for where to drill to install the bolts 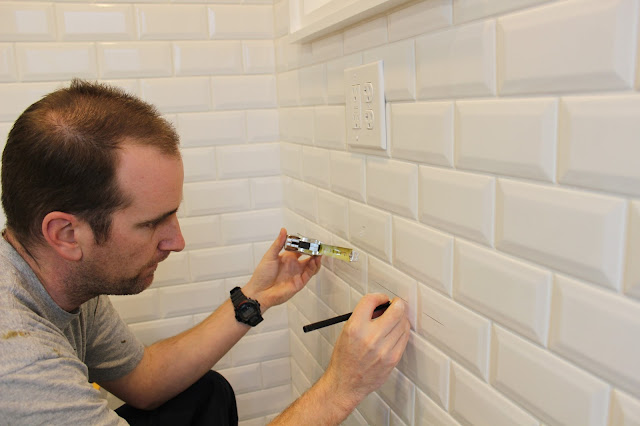 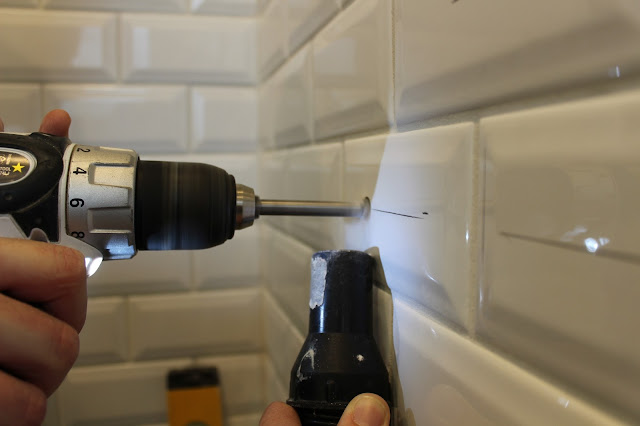 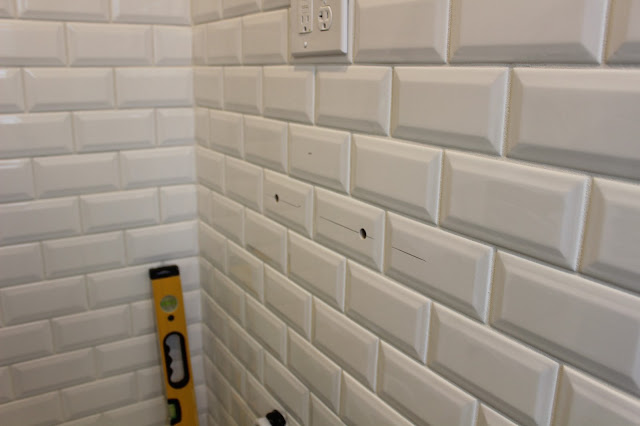 Next up was installing the two bolts that hold the sink to the wall. Chris likes to leave two nuts on the end to help give the socket attachment more to grab onto as he’s drilling the bolt into place 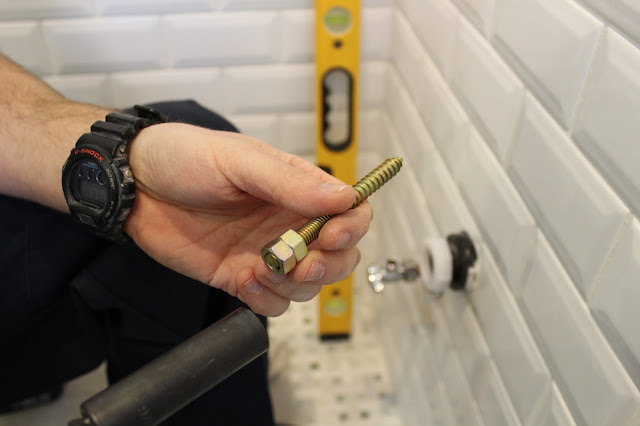 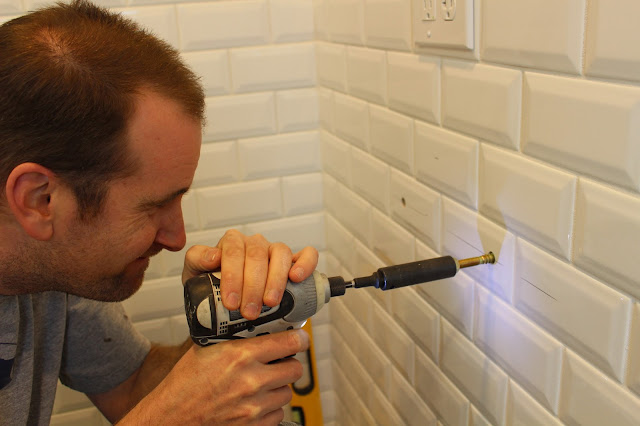 With the bolts installed… 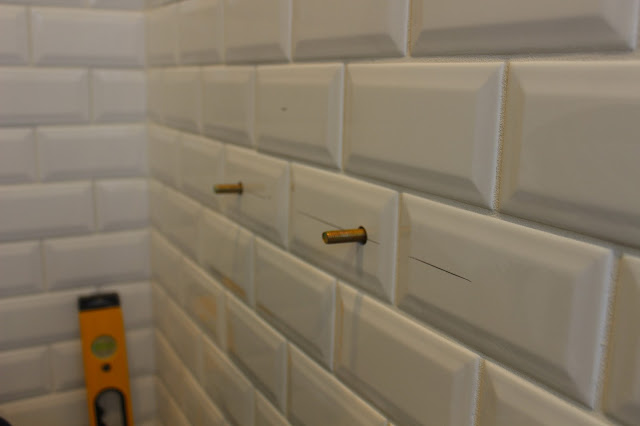 …it was time to prep the sink.
The sink has two holes on the back that the bolts go through to hold it up on the wall 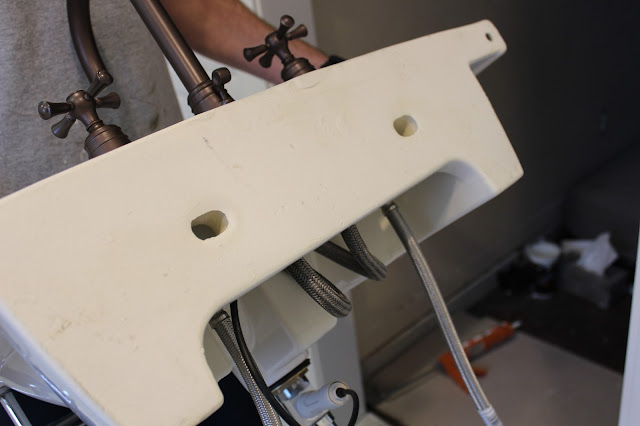 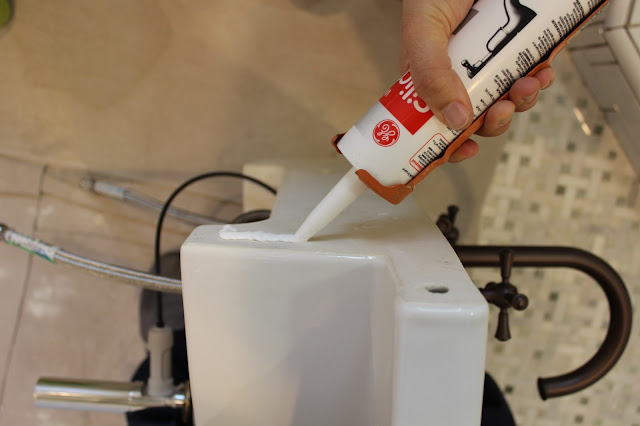 Ready for my pregnant cleavage? 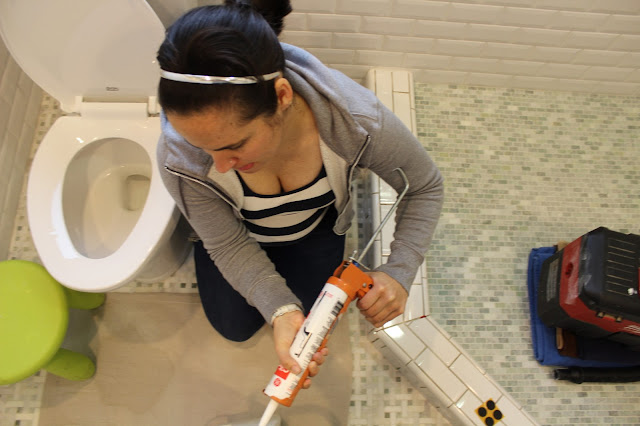 I’m sure Chris enjoyed taking that picture 🙂
Once I was done getting a line of silicone on the back, the sink looked like this 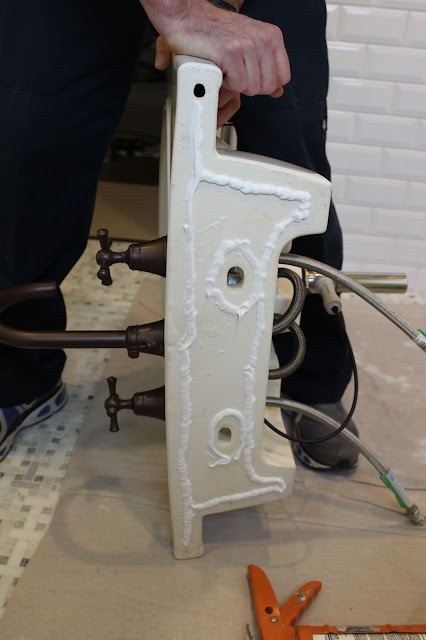 Now that the bolts were in the wall and the silicone was on the back it was time to put it in place. Chris set it through the bolts and against the wall while I put a level on top of the sink. He slightly adjusted to make sure the sink was level while I slid under the sink and put the washers and nuts onto each of the bolts coming out of the wall and now through the back of the sink. The wrinkle however was that the back of the sink was actually thicker than we anticipated (which we could have measured for and knew without error, but of course we didn’t do that) and so we didn’t have the bolts coming out of the wall far enough. We had to take the sink down, and bring the bolts out from the wall a little bit. Then, it was repeat (Chris holds it up, makes sure it’s level, I attach the washer and nuts). For a second time the bolts didn’t come out far enough. We didn’t want the bolts too far out from the wall because that meant less that they were going into the studs, so it was difficult finding the perfect length that allowed me to attach the nuts enough to the bolts and have the bolts secure enough to the wall. But the third time was the charm and we finally got that sink up 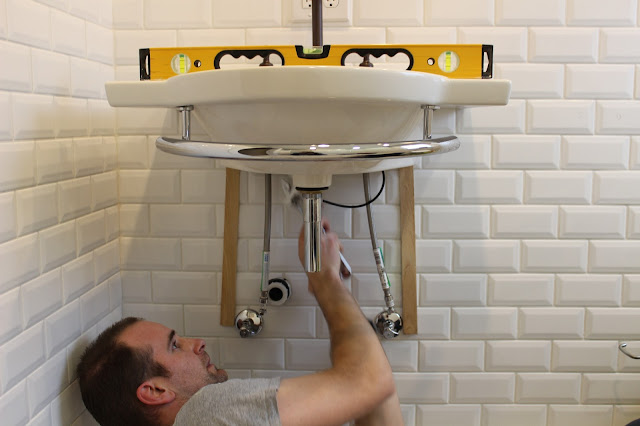 And as you can tell, Chris had already installed the faucet to the sink a couple weeks ago to make things easier on himself 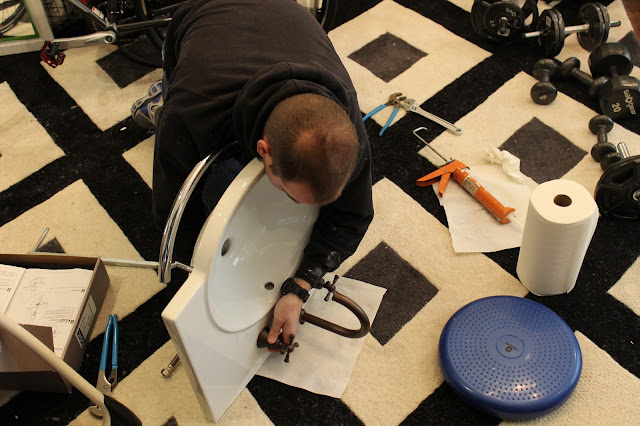 It’s a lot easier to get the faucet installed when the sink isn’t installed yet because you’ve got a much larger and more comfortable working area instead of being smashed up under a cabinet or against a wall.
But it wasn’t all fun and games because you can see in Chris’ annoyed face here there was a problem 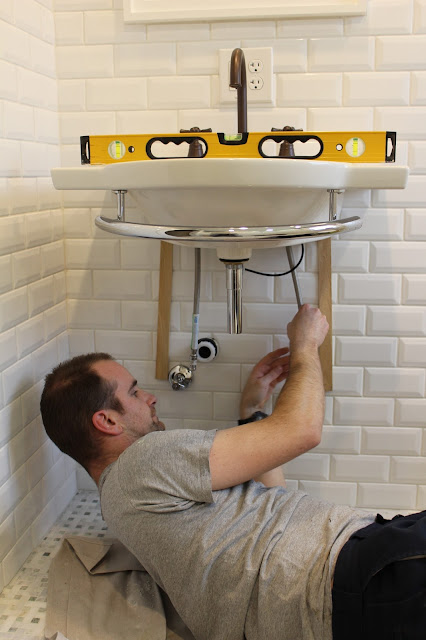 The water supply lines we got were too short, doh! 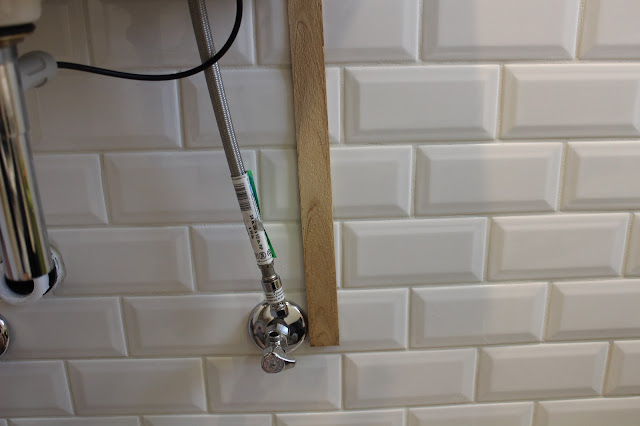 Not a big deal. We had purchased 16″ ones thinking that would be plenty long, so we just made a run to HD and got 20″ ones.
The next task was attaching the drain, Chris’ least favorite part of plumbing 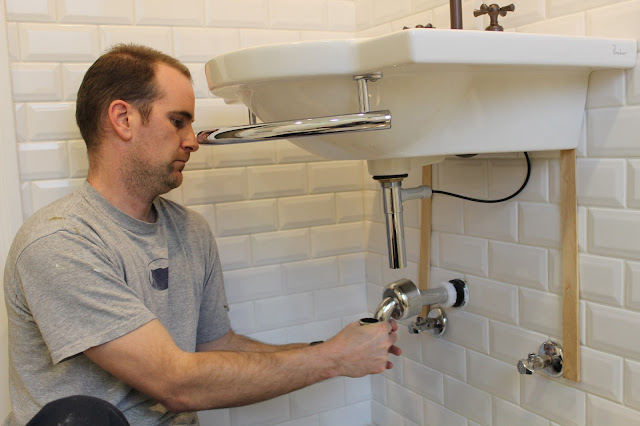 And if you’ll notice, the drain that came with our faucet is crooked 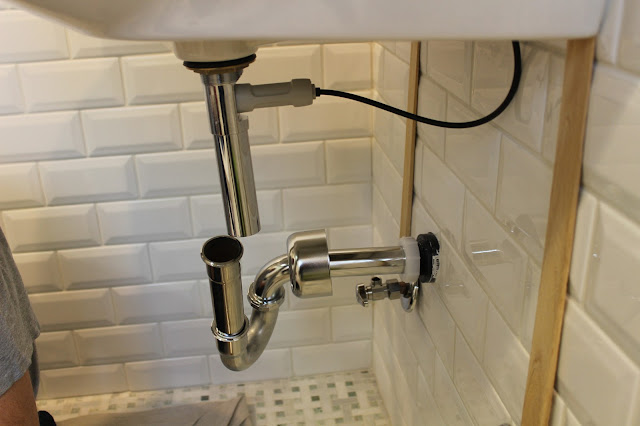 We weren’t quite sure what was going on because we took it off and put it back on a couple times, but for some reason it wasn’t seeding into the sink in a straight line, which made our other plumbing get a little crooked and wonky as well. Once we got it all hooked up it was time to test it 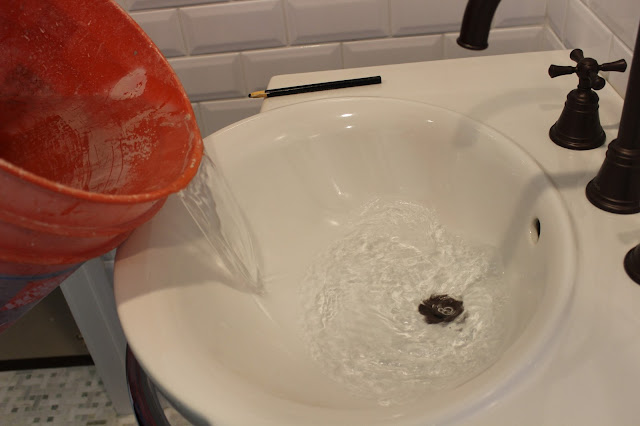 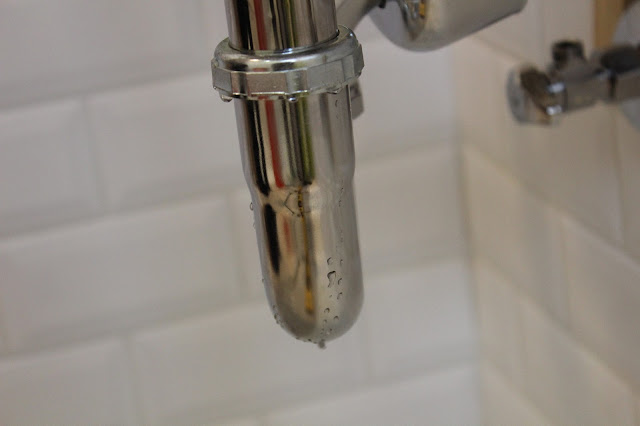 Chris says he never gets it right the first time (did I already mention hooking up the drain is his least favorite plumbing task?) So we simply checked all the connections, took it all apart and put it back together. We thought it was a problem with the drain from the faucet not seating right so we did all we could to make sure it went in straight, but even with our tugging and pulling and reattaching a few times it still wasn’t going in perfectly 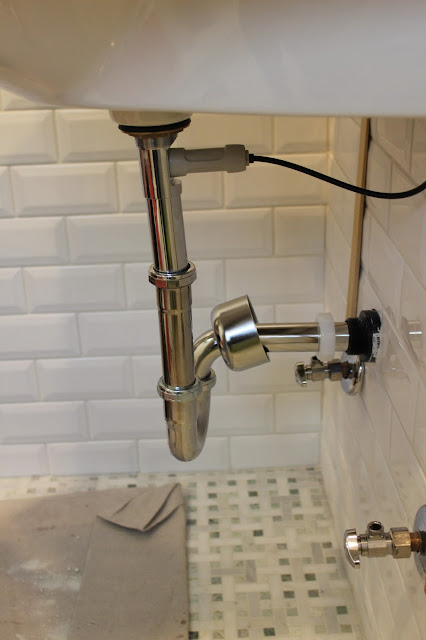 It certainly doesn’t look perfect, but once we reconnected everything and tested again, there were no leaks, so we called it a success 🙂
Last up was running a bead of silicone on the back of the sink between the sink and wall for some extra strength and also as a water barrier 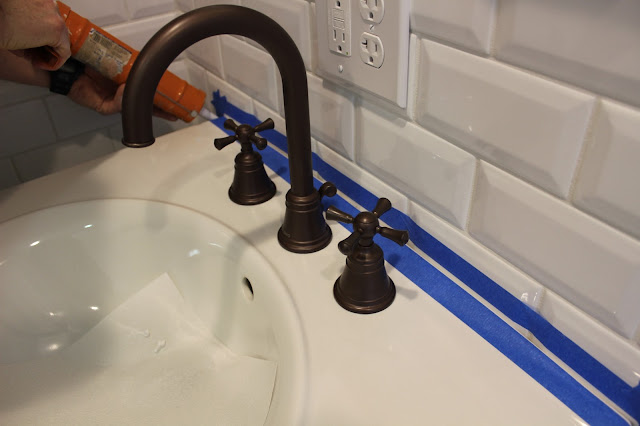 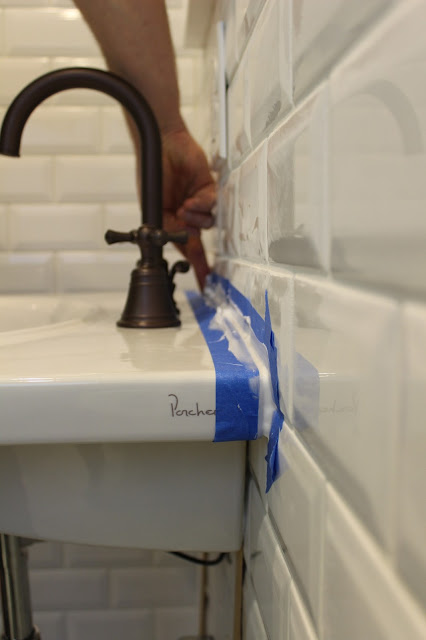 And then my friends, we had a very pretty sink installed 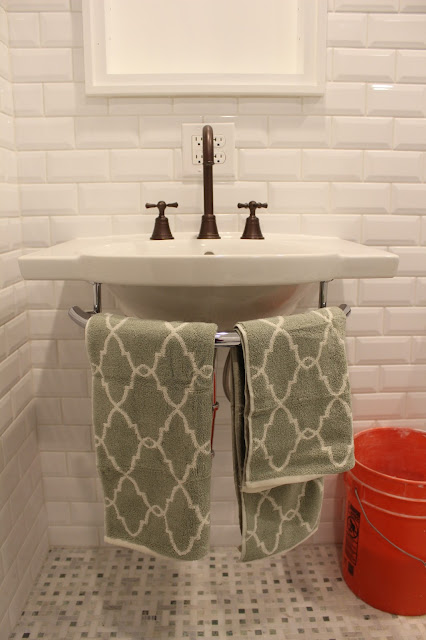 So now when we pee, we can wash our hands too 🙂 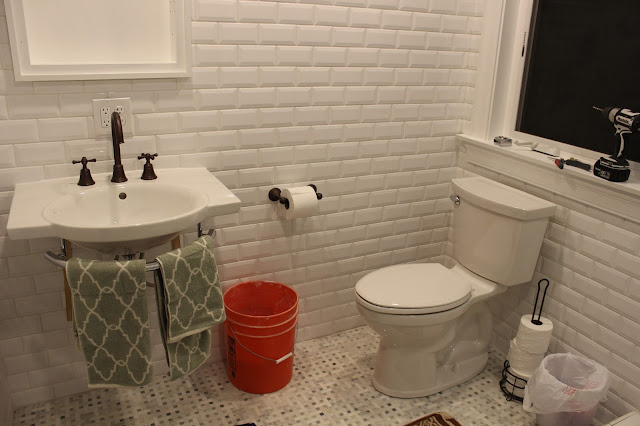 Oh, and a little side note: after measuring and measuring and adjusting and adjusting to try to get the maximum space between the toilet and the sink for fear that the sink would encroach comfortable toilet bathroom behavior, I am happy to report that when sitting on the toilet the sink does not feel too close at all and it’s comfortable getting to and from the toilet. Ok, end of TMI 🙂
« Frankly, I Was Sold at the Compliment (I’m that Easy)
Chris’ Tool Obsession: Channellocks »